The land of the free and the home of the brave proudly hails once more its twilight’s gleam. With lady liberty’s guiding torch welcoming all to its shores, America has always been the land that has embraced the diversity of cultural expression. September 17, 2017 was witness to such a demonstration.

On this historic day, an assembly consisting predominantly of those fluent in Gujarati gathered on the sanctified grounds of Akshardham in the suburban township of Robbinsville, NJ to celebrate the inauguration of a traditionally composed Sanskrit text. The proceedings were an example of diversity in its purist form. The assembly was a celebration of two momentous events:

The Inauguration of the Svāminārāyaṇasiddhāntasudhā

The evening assembly was marked with the inauguration of the Svāminārāyaṇasiddhāntasudhā by the auspicious hands of HH Mahant Swami Maharaj. Authored by Sadhu Bhadreshdas, the text is traditionally categorized as a vādagrantha – a formal exposition, justification, and defense of the philosophical and theological positions of a darśana. It is composed on the Akṣara-Puruṣottama Darśana as it was revealed by Parabrahman Puruṣottama Svāminārāyaṇa. Divided into nine chapters identified as dhārās, the text presents a sophisticated treatment of the philosophical principles of Bhagavān Svāminārāyaṇa. Among other things, it grounds these principles on expositions found within the Prasthānatrayī – a collective designation for the Upaniṣads, Śrīmadbhagavadgītā, and the Brahmasūtras. It also presents a unique epistemological system that is characteristic of the darśana. Its comprehensive, critical, yet reverent treatment of alternative darśanas and their disagreements not only reflects the traditional methods of a vādagrantha, but also emphasizes the robustness of the text.

In admiration for the text’s intellectual appeal, several dignitaries and renowned academics in the assembly expressed their thoughts and praise for the text. Both the text and its author was honored by invited guests including Professor George Cardona – a renowned professor emeritus of linguistics and South Asian studies at the University of Pennsylvania; Professor Sthaneshwar Timalsina – a distinguished professor at San Diego State University; Professor Graham Schweig – the director of studies in religion at Christopher Newport University; Professor Deven Patel – a professor of South-Asia Studies at University of Pennsylvania; Professor Jyotindra Dave – the director of BAPS Research Institute at Akshardham; New Delhi; and Paramacharya Sadasivanathaswami – the chief editor at Hinduism Today.

Professor Deven Patel began by explaining the significance of a vādagrantha and its distinctive role in establishing the principles of a darśana. He offered a brief summary of the great philosophical insights that have been offered by the Sanskrit commentarial tradition and positioned the vādagrantha within this tradition. Among other things he complemented the texts 459 kārikās – poetic syntheses of the text’s exposition, justification, and defense of the principles of the Akṣara-Puruṣottama Darśana. He also offered reverence to Swamiji for his outstanding work as the author of both the comprehensive commentary of the sacred texts of the Prasthānatrayī and the Svāminārāyaṇasiddhāntasudhā – an accomplishment never performed before by a single author.

Paramacharya Sadasivanathaswami substantiated how a work of such great prominence is possible only by the divine grace of the guru. He focused on the significance of the guru in sustaining a darśana’s principles and emphasized the need to follows a guru’s commands. He concluded by commending Sadhu Bhadreshdas’ commitment toward fulling Pramukh Swami Maharaj’s wishes to compose both commentaries of the Prasthānatrayī and a vādagrantha on the darśana’s foundational principles.

Professor Timalsina then revealed the significance of the text in the modern world. He emphasized that although very few members of the audience could fully comprehend the Sanskrit discussions in the text, let alone read the language, the fact that so many had gathered to celebrate its creation was a testament to the enduring nature of the language and an indicator of its magnificence. He also revealed that the text was unique in that while being drafted in simple language, its content and depth reflected profound thought. He projected that the text would draw and inspire great academic scholarship and would play a pivotal role in invigorating not only the appreciation, but also the practice of Sanskrit studies.

Thereafter, Professor Graham Schweig expressed his admiration for Bhadreshdas Swami. He offered reverence to Swamiji for his outstanding work. He emphasized the clarity with which the text was composed and conveyed that it was a great fortune for him and all those who had gathered to have had the opportunity to meet the author of such outstanding works.

Professor George Cardona followed by identifying distinctive features of Bhadreshdas Swami’s commentary on the Prasthānatrayī and the vādagrantha. He began by discussing characteristic features of the commentarial tradition. Thereafter, he highlighted Sadhu Bhadreshdas’ exposition of Akṣarabrahman as a distinct ontological entity from Parabrahman based on readings of the Prasthānatrayī. Professor Cardona summarized his assessment of these readings by stating, “You will find in Swami Bhadreshdas’ bhāṣya (commentary) on the Brahmasūtras an absolutely lucid, faithful interpretation of the sutras.” Thereupon, he reflected on the Svāminārāyaṇasiddhāntasudhā’s unique consideration of alternative perspectives and responses to them. Moved by the vādagrantha’s sympathetic treatment of opposing viewpoints, he stated in appreciation, “Another thing that characterizes Bhadreshdas’ work in contrast to a typical other sort of comparable work is the lack of animosity.” Sadhu Bhadreshdas’ subtle treatment of raised objections is conducted in such a manner that one “never realizes that he is really arguing against anybody.”

The assembly thereafter continued by recalling the admiration, commendation, and recognition expressed by the Śrī Kāśī Vidvat Pariṣad for Sadhu Bhadreshdas’ creation of the Svāminārāyaṇasiddhāntasudhā. Established in Varanasi, the Kāśī Vidvat Pariṣad is an authoritative, honorable council which serves a decisive role in matters concerning Vedic principles and its research. In recognition of the outstanding composition of the text, the novelty of the Akṣara-Puruṣottama Darśana, and its characteristic Akṣara-Puruṣottama Siddhānta (doctrine), the council presented a letter of endorsement and a copper-plated letter of declaration to Mahāmahopādyāya Bhadreshdas Swami. Notably, the two documents express the following:

“Acclaimed by all scholars, respected Mahāmahopādyāya Sadhu Bhadreshdas is an ācārya and a contemporary commentator in the lineage of commentators on the Prasthānatrayī.”

“We (members of the Kāśī Vidvat Pariṣad) all collectively endorse that this Akṣara-Puruṣottama Siddhānta that has been revealed by Parabrahman Svāminārāyaṇa is a Vedic siddhānta that is distinct from Advaita, Viśiṣṭādvaita, and all other doctrines.”

Both the letter of endorsement and the copper-plated letter of declaration were offered by Bhadreshdas Swami to guru Mahant Swami Maharaj. Speaking on this occasion, Bhadreshdas Swami humbly credited his scholarly works to the inspiration he had received from Pramukh Swami Maharaj and the blessings of guru Mahant Swami Maharaj. He added: “The Akṣara-Puruṣottama Darśana is not only confined to such texts, but is also practiced as a way of life by thousands of devotees of the BAPS Swaminarayan Sanstha.”

The assembly concluded with HH Mahant Swami expressing the significance of the vādagrantha and extolling the humility of Bhadreshdas Swami. Revealing the work’s historical importance, Swamiji identified it as a pinnacle text on the foundational principles of the Akṣara-Puruṣottama Darśana. All those present at the assembly expressed their deep admiration and were honored to have witnessed the inauguration of such a historic text. 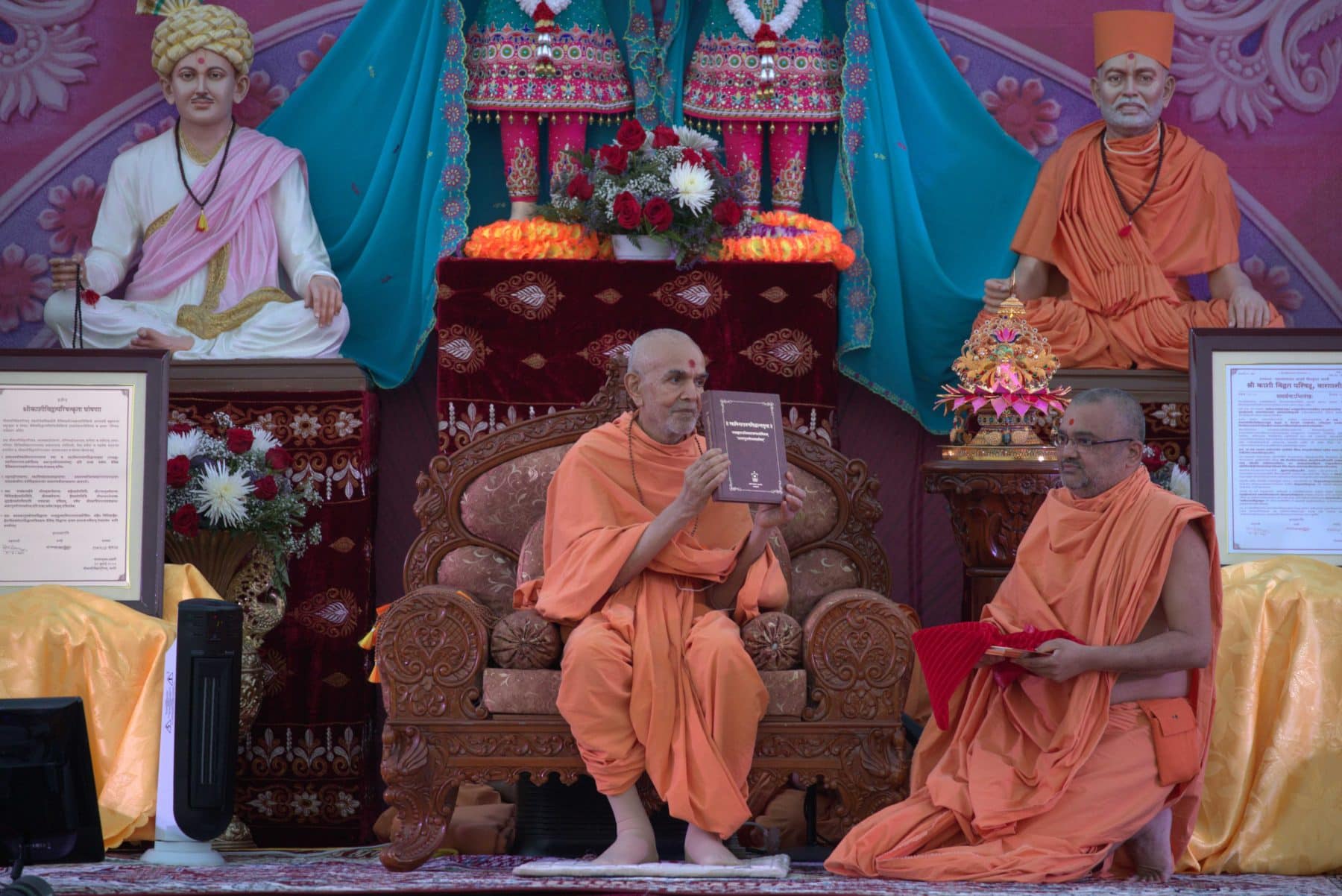 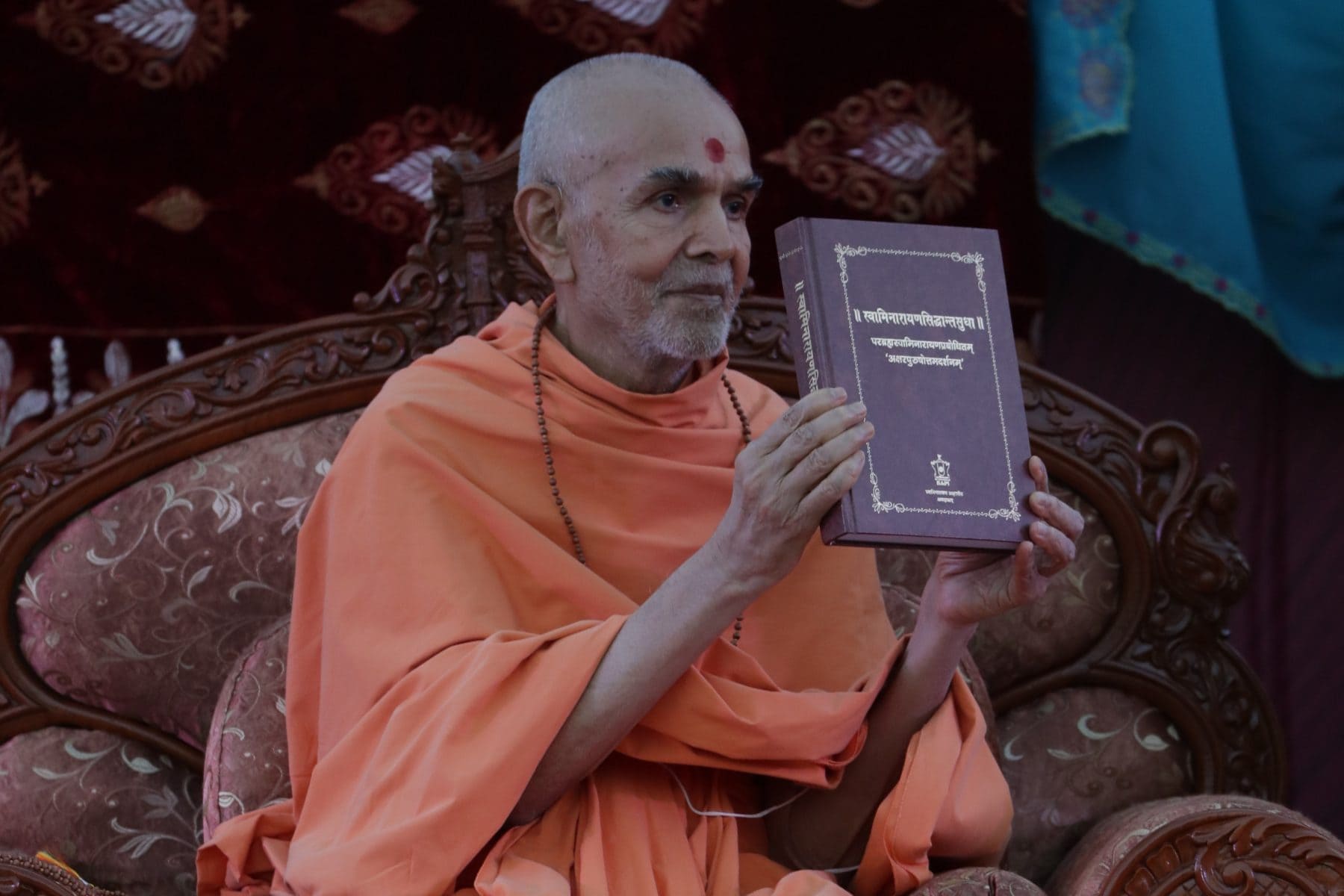 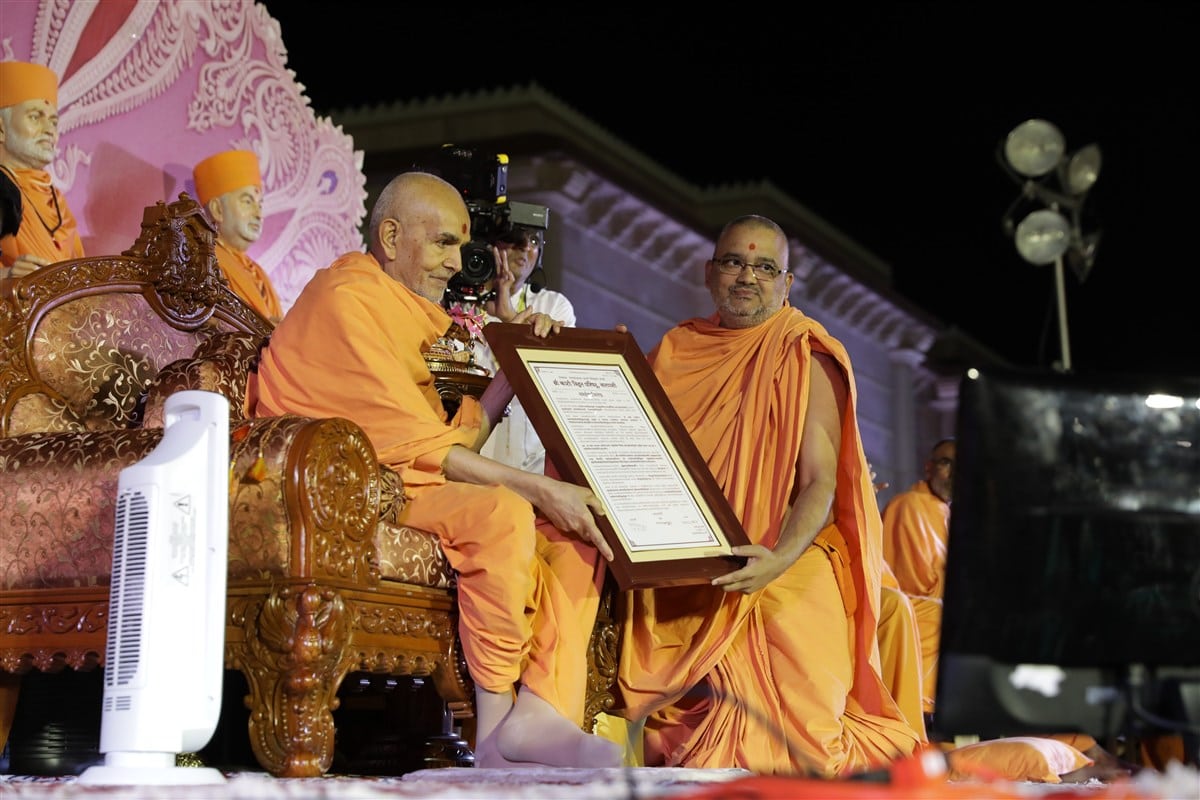 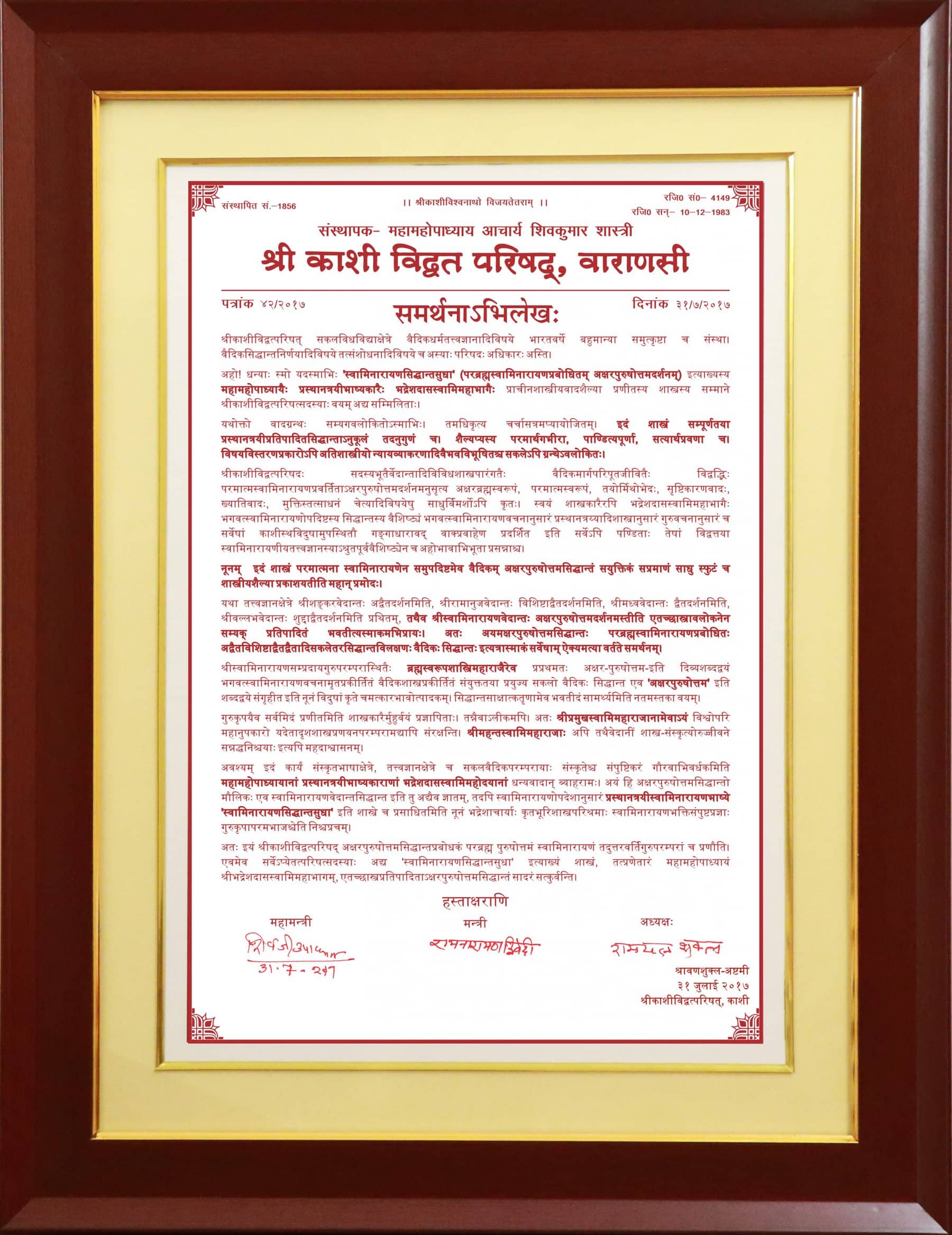 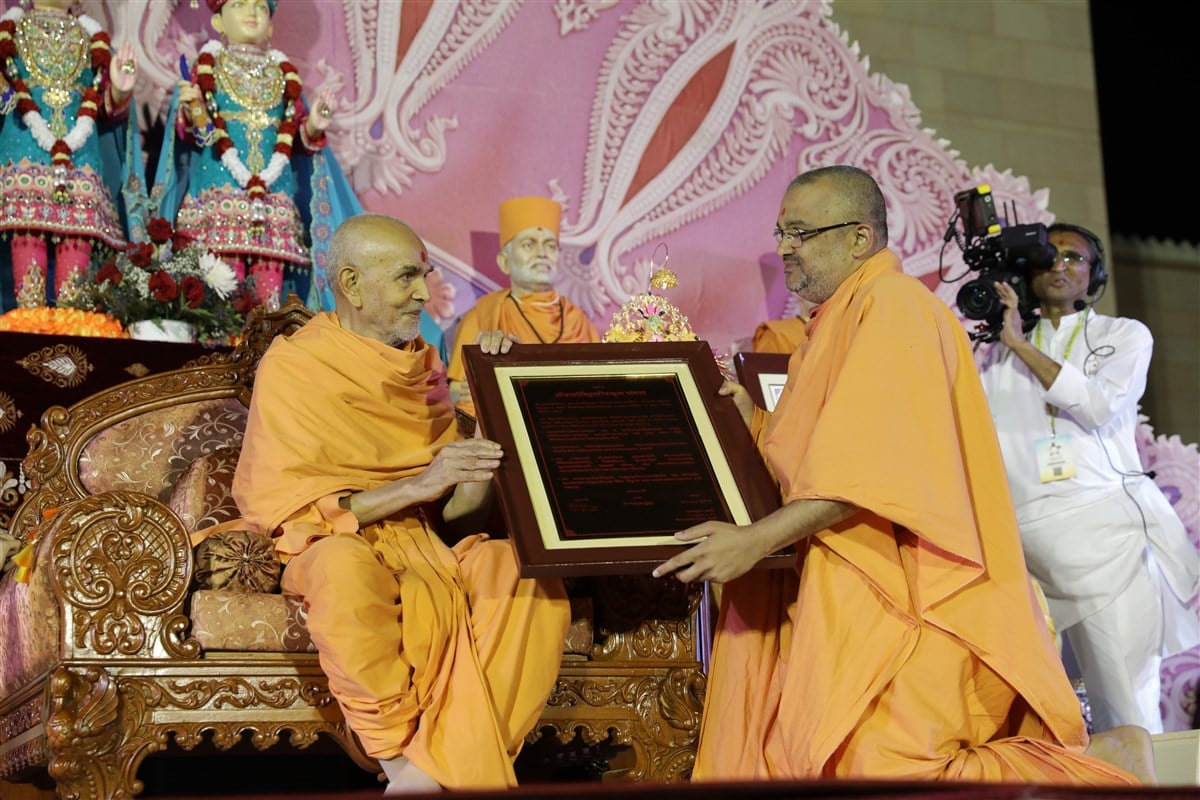 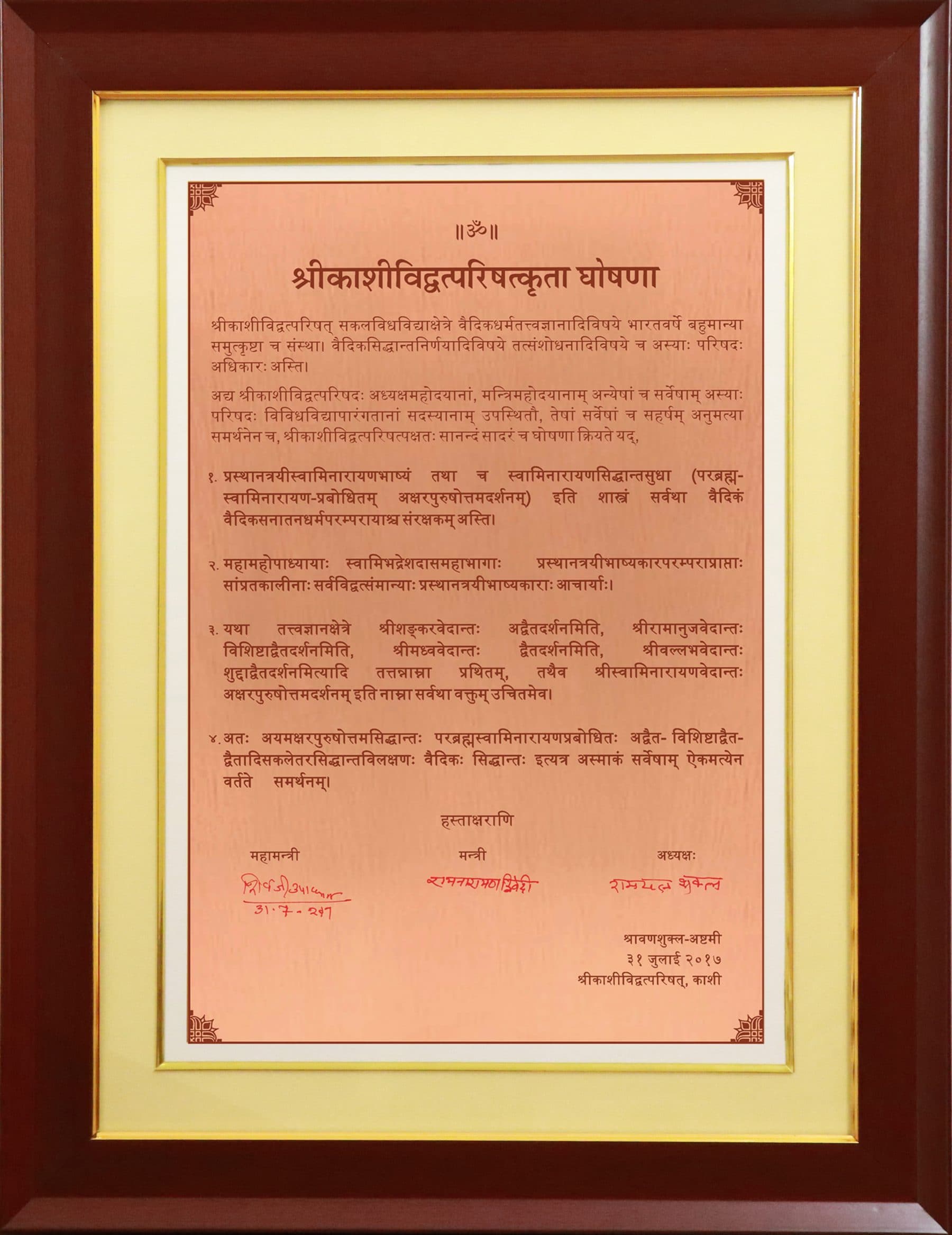