A Grand Felicitation of the Akṣara-Puruṣōttama Darśana in East India

On March 21 2022, a three-day national academic conference entitled ‘The Akṣarapuruṣōttama Darśana: A Dialogue with Other Darśanas’ was organized at the Central Sanskrit University, Sadashiva Campus in Puri, Odisha. This conference provided a unique opportunity for scholars of East India to gain a deeper insight into Parabrahma Svāminārāyaṇa’s novel Vedic doctrine. This event also encompassed the commemoration of Pramukh Swami Maharaj’s work on the occasion of his centenary birth celebrations, the felicitation of Mahāmahōpādhyāya Bhadreshdas Swami, and the commendation of the Akṣarapuruṣōttama Darśana as a distinct Vedic darśana.

The Jagannath Temple, located in Puri in the state of Odisha on the eastern coast of India, is a renowned and vibrant sacred place of pilgrimage for countless Hindus especially of the Vaiṣṇava tradition. It is recognized as one of the predominant pilgrimage places of India known as ‘Cāra Dhāma’ – four sacred places that most Hindus believe should be visited at least once during one’s lifetime due to its spiritual significance. Millions of aspirants visit the Jagannath Temple every year to offer their heartfelt devotion and humble prayers to the divine idols of Balabhadra, Subhadrā, and Shri Jagannath, a form of Bhagavān Kṛṣṇa.

The morning of 21 March commenced with Mahāmahōpādhyāya Bhadreshdas Swami offering the Svāminārāyaṇabhāṣyam and the Svāminārāyaṇasiddhāntasudhā at the holy feet of Shri Jagannath in the temple. During this ceremonious offering all those present recited the ‘Jagannāthāṣṭakam,’ a poetic composition authored by Mahāmahōpādhyāya Bhadreshdas Swami consisting of eight Sanskrit verses exalting the glory of Shri Jagannath. This ceremony was acclaimed by present scholars and dignitaries as a historic event. Centuries ago Ādi Śaṅkarācārya offered his commentaries to Shri Jagannath and recited Sanskrit verses. After Śaṅkarācārya this was the first time a bhāṣyakāra offered his written Prasthānatrayī commentaries to Shri Jagannath while reciting Sanskrit verses that he himself composed.

Thereafter, a traditional festive procession was organized within the university campus as a celebration of a novel dārśanic contribution to the Vedānta tradition. The metallic idols of Parabrahma Svāminārāyaṇa and Akṣarabrahma Gunatitanand Swami along with the Svāminārāyaṇabhāṣyam and Svāminārāyaṇasiddhāntasudhā texts were carried in a decorative palanquin throughout the campus and on the streets of Puri. During the procession traditional Odisha singers sang devotional bhajans while scholars and students recited Vedic mantras.

This commentary does not criticize any school of thought. Rather, it substantiates its own position upon expressing reverence towards everyone. This is the reason why we have all gathered to welcome and honour this commentary. We have experienced a glimpse of only one disciple of Pramukh Swami Maharaj. There are one thousand such sadhus, more than a thousand mandirs, and numerous educational institutions. Pramukh Swami Maharaj inspired the creation of the Prasthānatrayī commentaries. Hence, his felicitation will be forever etched in the history of this university.

Several prominent universities and institutions such as the Utkal Parishad, Central Sanskrit University, and Shri Jagannath Sanskrit University collaboratively bestowed Pramukh Swami Maharaj with the Śāstra-paramparā-kalpadruma Award. This award was a distinguished accolade engraved in a copper that signified the recognition of Pramukh Swami Maharaj’s historic work to preserve as well as further enrich India’s scriptural tradition by inspiring the creation of the Prasthānatrayī commentaries along with numerous other texts. This award was offered to Pramukh Swami Maharaj by the royal hands of Gajapati Mahārājā Shri Divyasingha Deva.

Through the inspiration of his guru Pramukh Swami Maharaj along with his tireless efforts, Mahāmahōpādhyāya Bhadreshdas Swami authored the Svāminārāyaṇabhāṣyam and positioned Parabrahma Svāminārāyaṇa’s doctrinal teachings within a darśanic framework. The Svāminārāyaṇabhāṣyām is an extensive five-volume Sanskrit commentary on the Prasthānatrayī that thoroughly substantiates the Vedic authenticity of the Akṣarapuruṣōttama Darśana. Thus, unanimously recognizing this work as a significant and unprecedented contribution to the Vedānta tradition, several prestigious universities and organizations of East India collaboratively bestowed Mahāmahōpādhyāya Bhadreshdas Swami with the Bhāṣyakara Mahācārya Award. This award was bestowed by the King of Puri, Gajapati Mahārājā Divyasingha Deva, within the honourable presence of numerous prominent scholars and dignitaries. In his address Mahāmahōpādhyāya Bhadreshdas Swami humbly offered this award at the holy feet of his iṣṭadēva Parabrahma Svāminārāyaṇa and his guru Pramukh Swami Maharaj stating that Pramukh Swami Maharaj is the true Bhāṣyakara Mahācārya. This bestowment inspired feelings of pride and joy in the hearts of all those who witnessed the ceremony as it signified the felicitation of not only a single text or sampradāya, but the entire Vedic tradition.

A three-day national academic conference entitled ‘The Akṣarapuruṣōttama Darśana: A Dialogue with Other Darśanas’ was organized by the Utkal Parishad and Central Sanskrit University. Professors and students from various universities presented more than 30 scholarly research papers on topics such as:

A significant component of this conference was the opportunity to partake in a scholarly philosophical deliberation with the bhāṣyakara himself. Mahāmahōpādhyāya Bhadreshdas Swami first explained the doctrinal principles of Parabrahma Svāminārāyaṇa’s Akṣarapuruṣōttama Darśana. Thereafter, a thorough question-answer session in Sanskrit transpired between eminent scholars of East India and Bhadreshdas Swami. Scholars posed questions regarding the darśana’s acceptance of five distinct ontological entities, their characteristics, as well as each entity’s relationship with one another, its belief of creation, and its interpretation of specific Vedic verses. Mahāmahōpādhyāya Bhadreshdas Swami responded to each question in a scholarly manner based on scriptural revelations. Upon receiving satisfying responses to their questions, scholars unanimously accepted the Akṣarapuruṣōttama Doctrine as a distinct and authentic Vedic darśana.

We were able to experience the prestige and intellect of a true scholar within the humble responses of Bhadresh Swamiji.

The Ganga River culminates within the ocean. But the sacred Akṣarapuruṣōttama Darśana Ganga will continuously flow within the hearts of scholars. This darśana has earned a position amongst the succession of prestigious darśanas that have been gifted from time to time by the great ācāryas of India.

This darśana will have an impact on the entire world. From every perspective – social, spiritual, cultural, and educative, this darśana is a complete and holistic darśana. The aspiration to further this doctrine will be fulfilled if the study of this darśana is integrated within the academic curriculum of the new education system that will soon be implemented within our country… Today let us hope and wish that we promote the Svāminārāyaṇa Darśana and establish peace and benevolence. I can confidently say that this commentary authored by Mahāmahōpādhyāya Bhadreshdas Swami is the world’s eighth wonder.

The Recognition of a Distinct Vedic Doctrine: The Akṣarapuruṣōttama Darśana

Upon meticulously examining and analysing the Prasthānatrayī commentaries along with principal sacred texts of the sampradāya such as the Vacanāmṛta for more than a month, scholars endorsed the Akṣarapuruṣōttama Darśana’s Vedic authenticity and its distinct darśanic identity by offering a written declaration engraved in copper entitled Anujñāpatrapratīvī. The declaration clearly expressed that the Akṣarapuruṣōttama Darśana is an eternal Vedic darśana that is ‘distinct from Advaita, Viśiṣṭādvaita, and all other Vedic doctrines.’

By accepting the Akṣarapuruṣōttama Darśana’s distinct Vedic identity and felicitating His Holiness Pramukh Swami Maharaj on the auspicious occasion of his centenary birth celebrations, a momentous event transpired within Vedānta history on the sacred land of Puri. 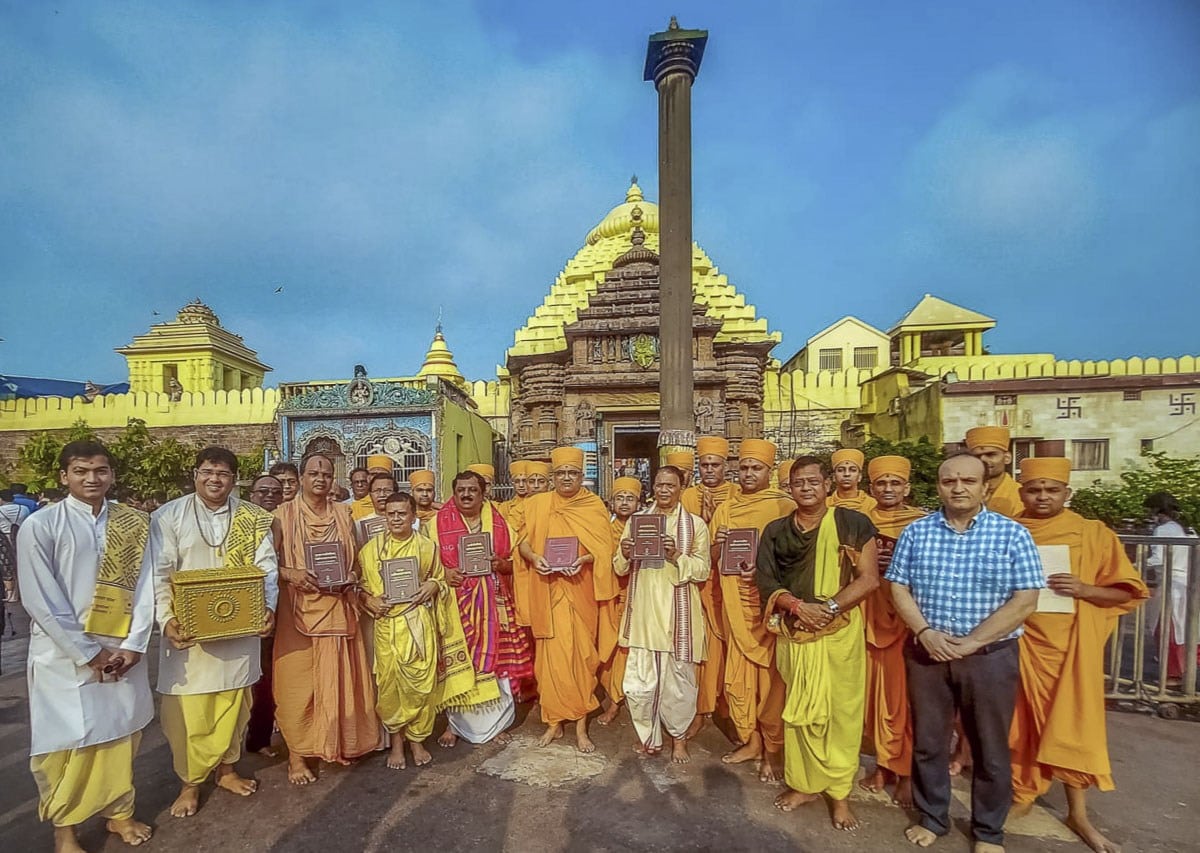 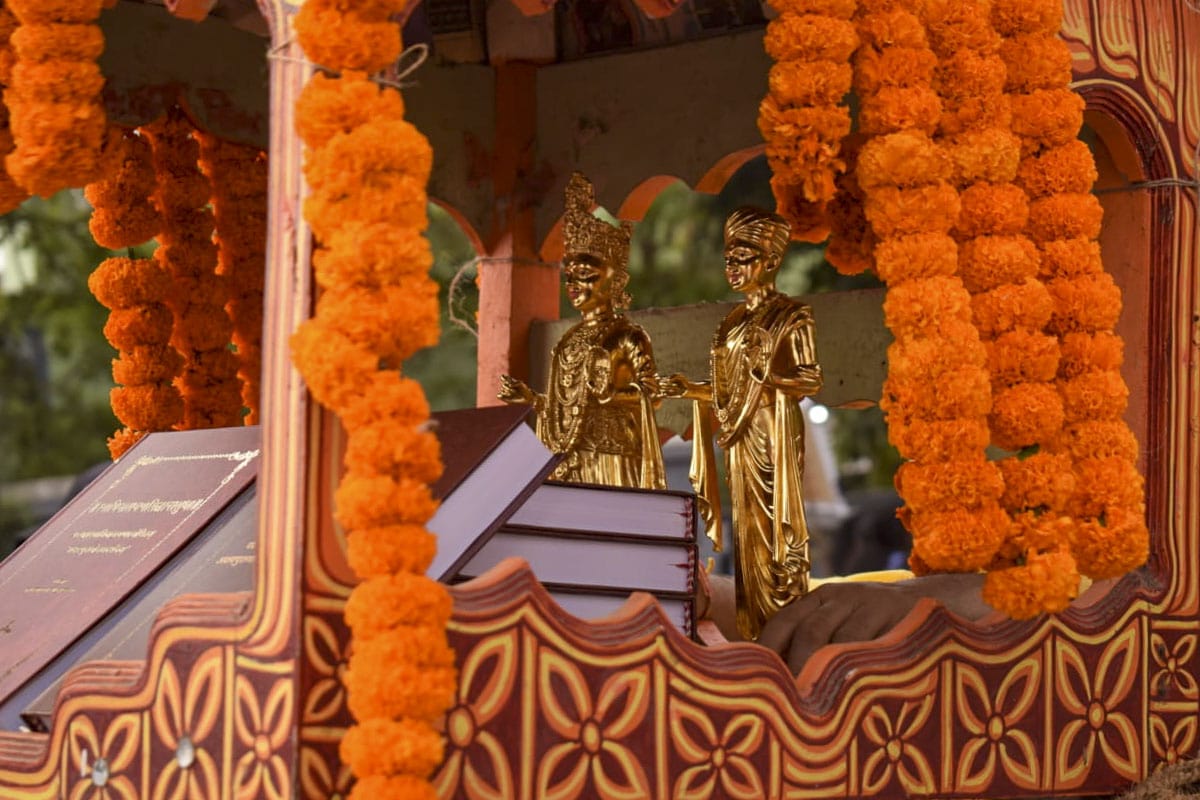 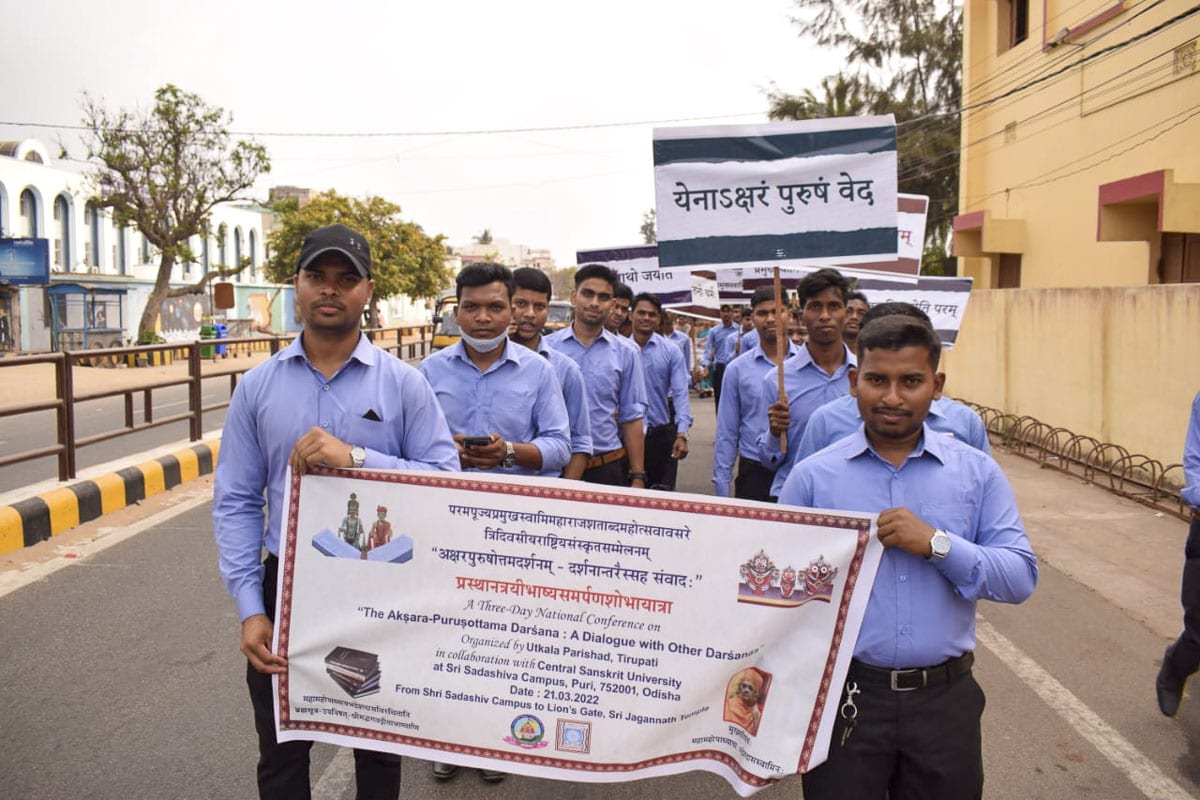 students partake in a festive procession of the Akṣarapuruṣōttama Darśana 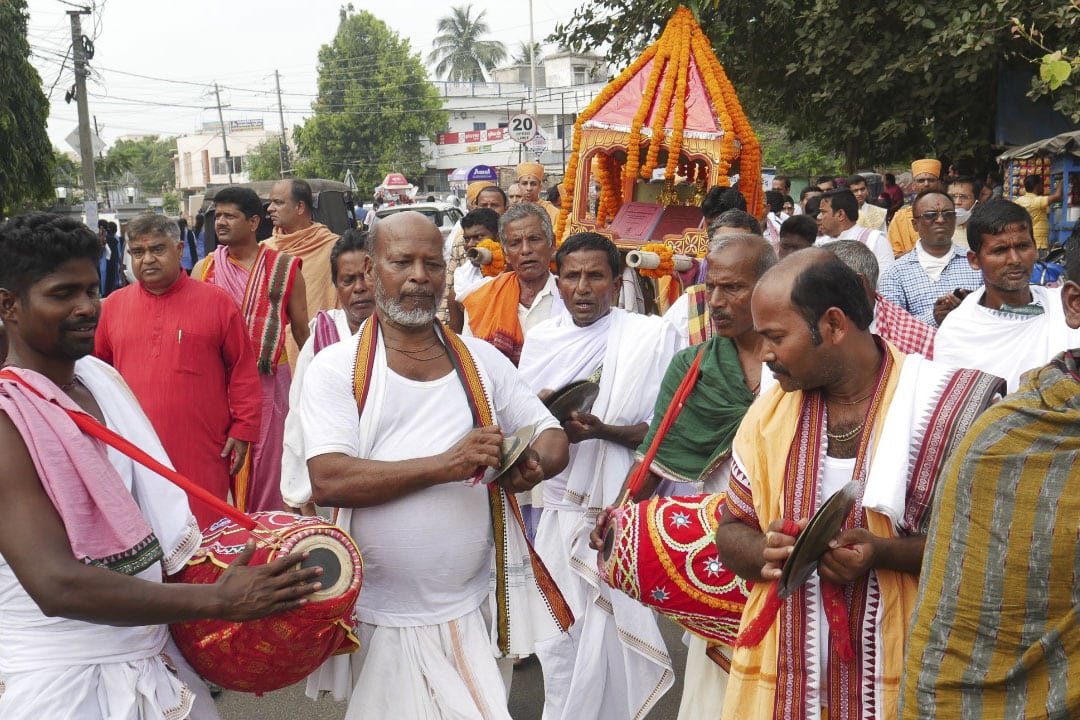 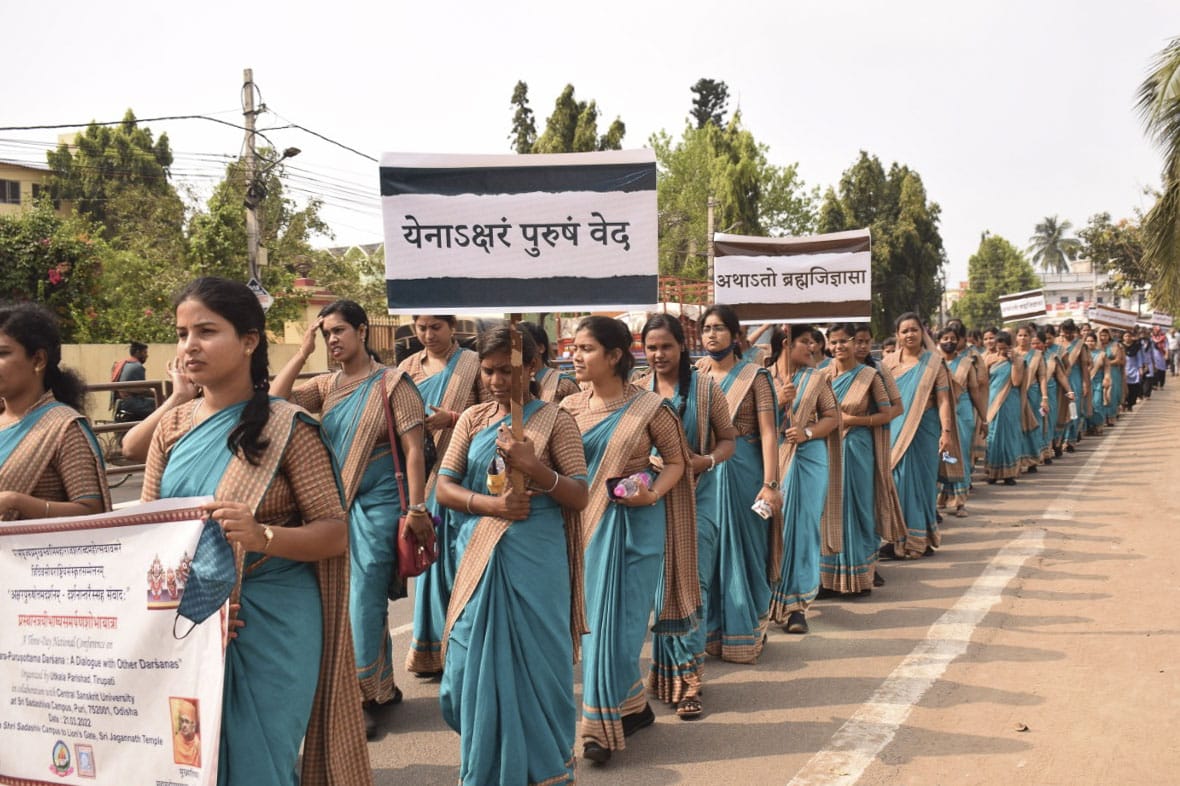 Students partake in a festive procession of the Akṣarapuruṣōttama Darśana 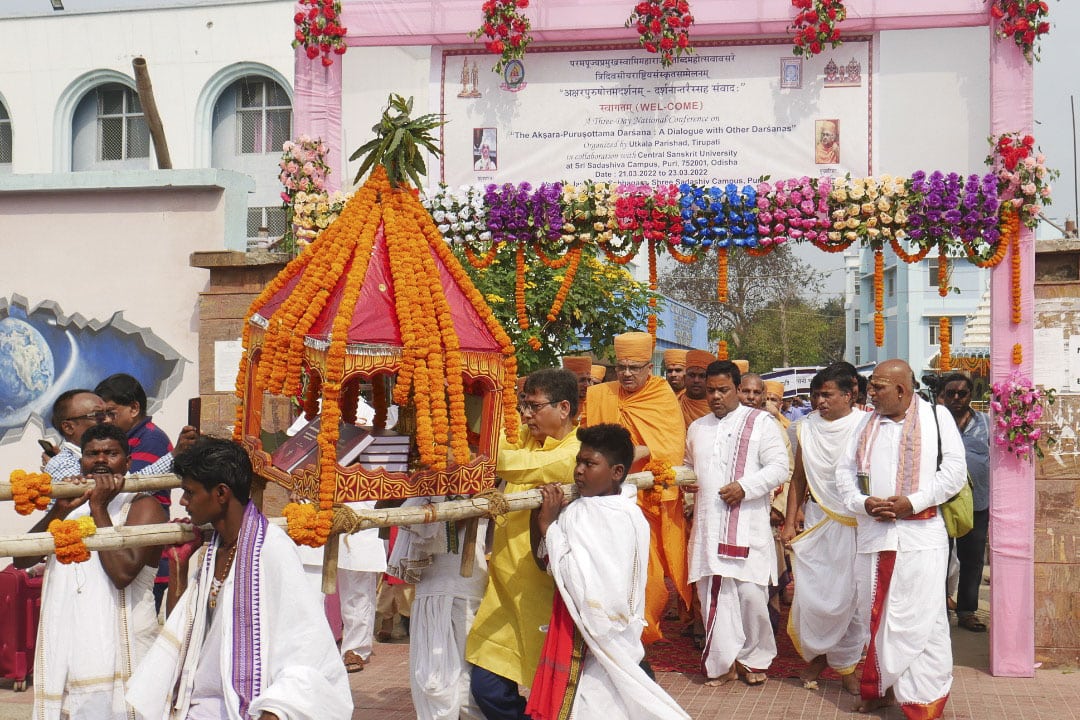 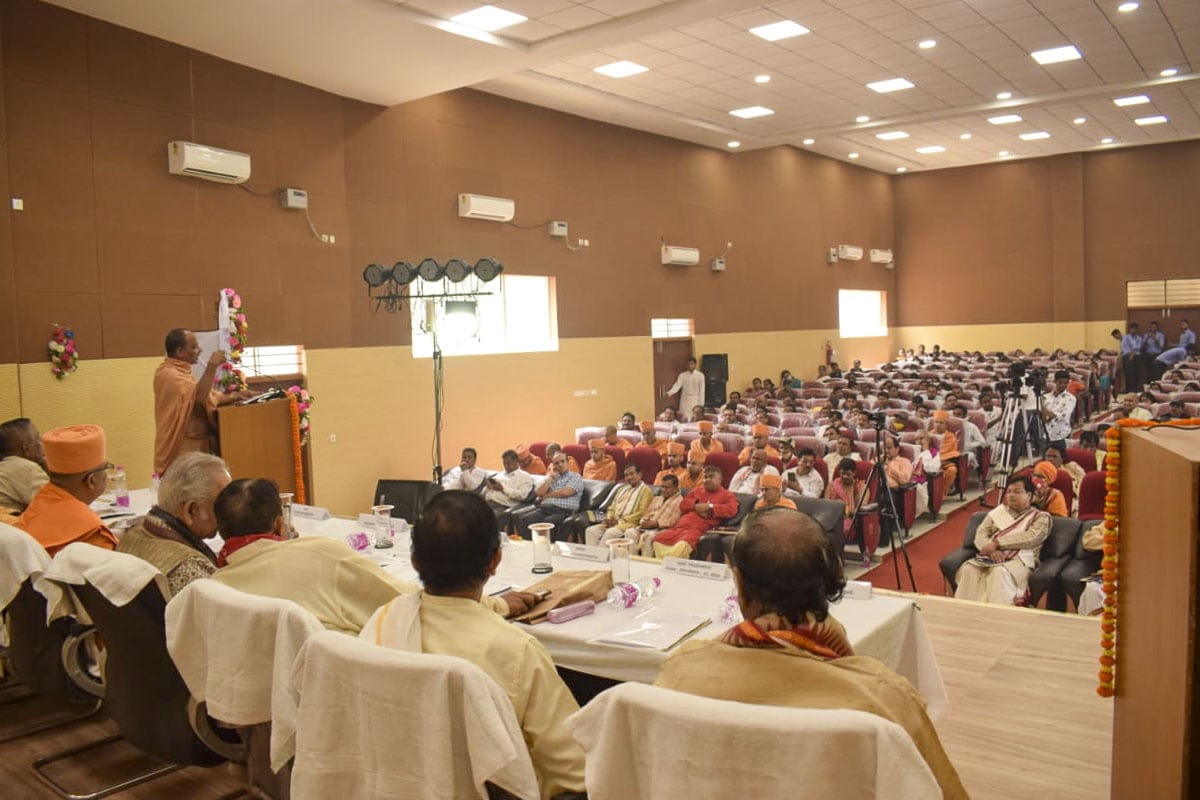 Prof. Gyanaranjan Panda, the general secretary of the Utkal Parishad, addresses the assembly during the inauguration ceremony 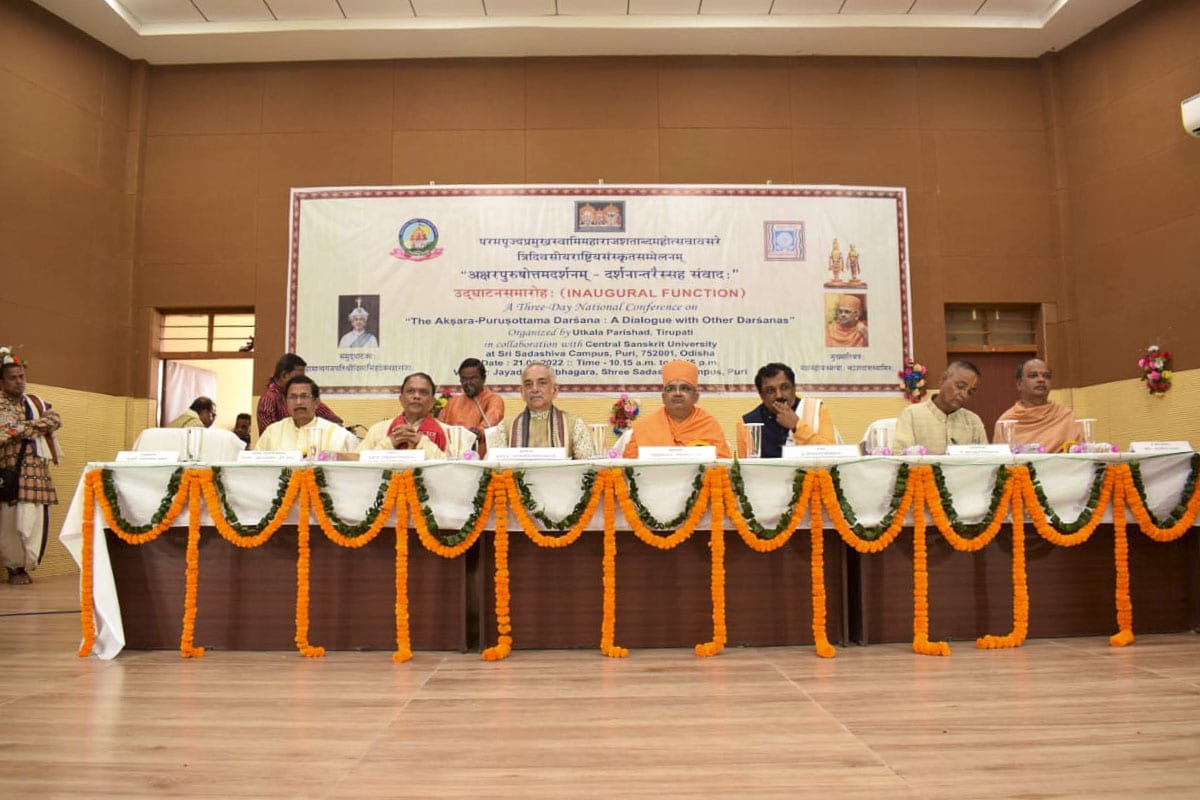 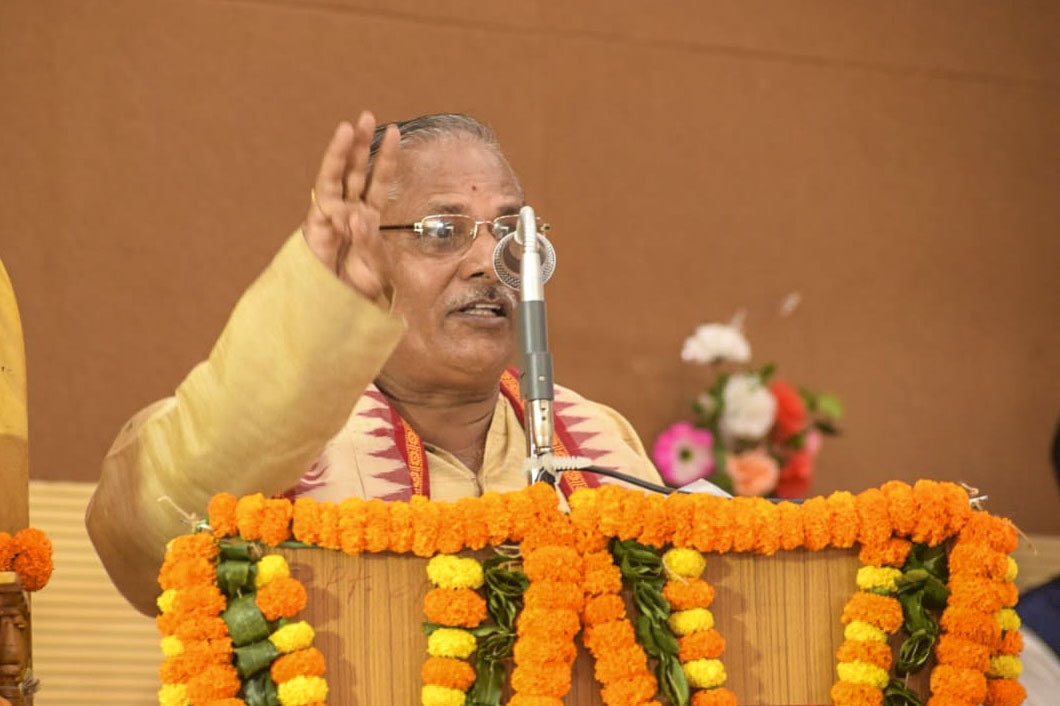 Prof. Satyanarayan Acharya, the chairperson of the Utkal Parishad, addresses the assembly 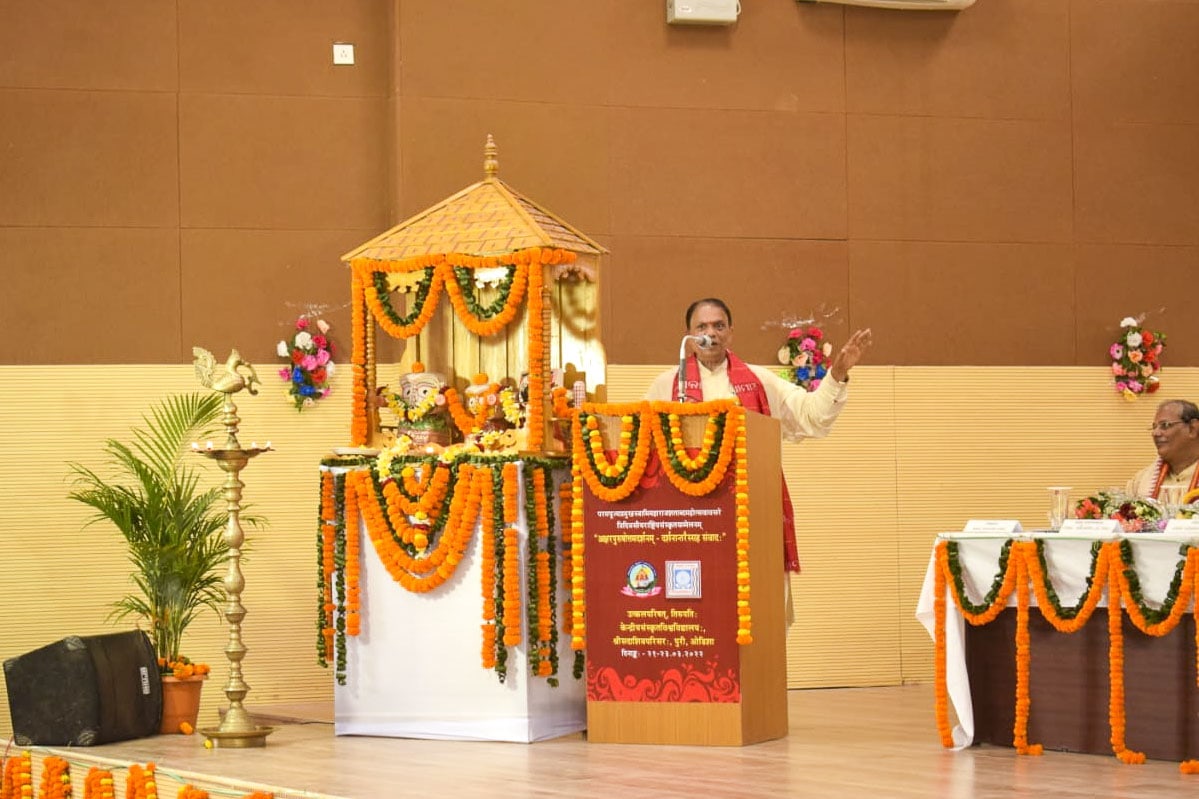 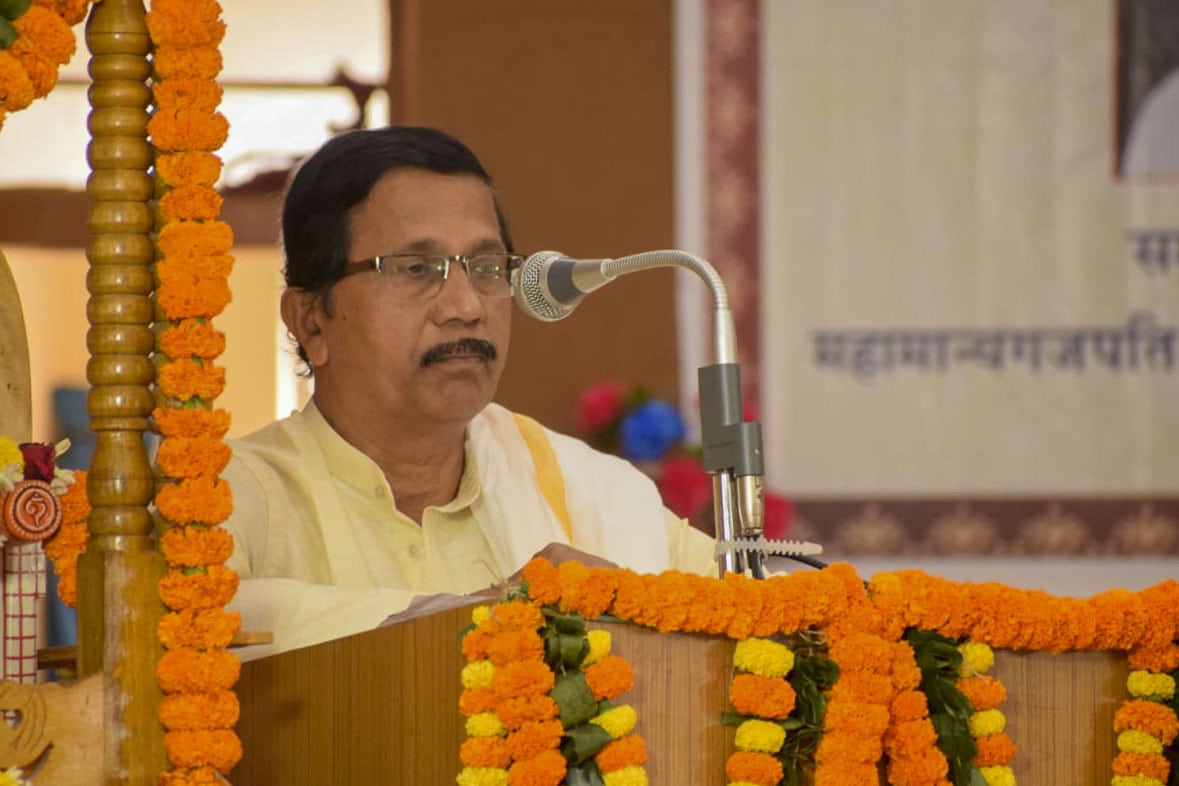 Prof. Khageshwar Mishra, the director of the Sadashiv Campus of Central Sanskrit University, addresses the assembly 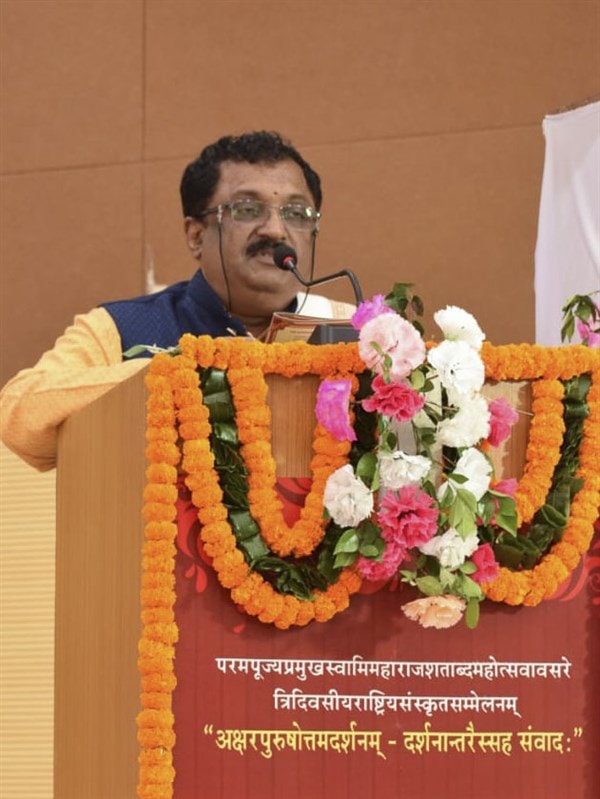 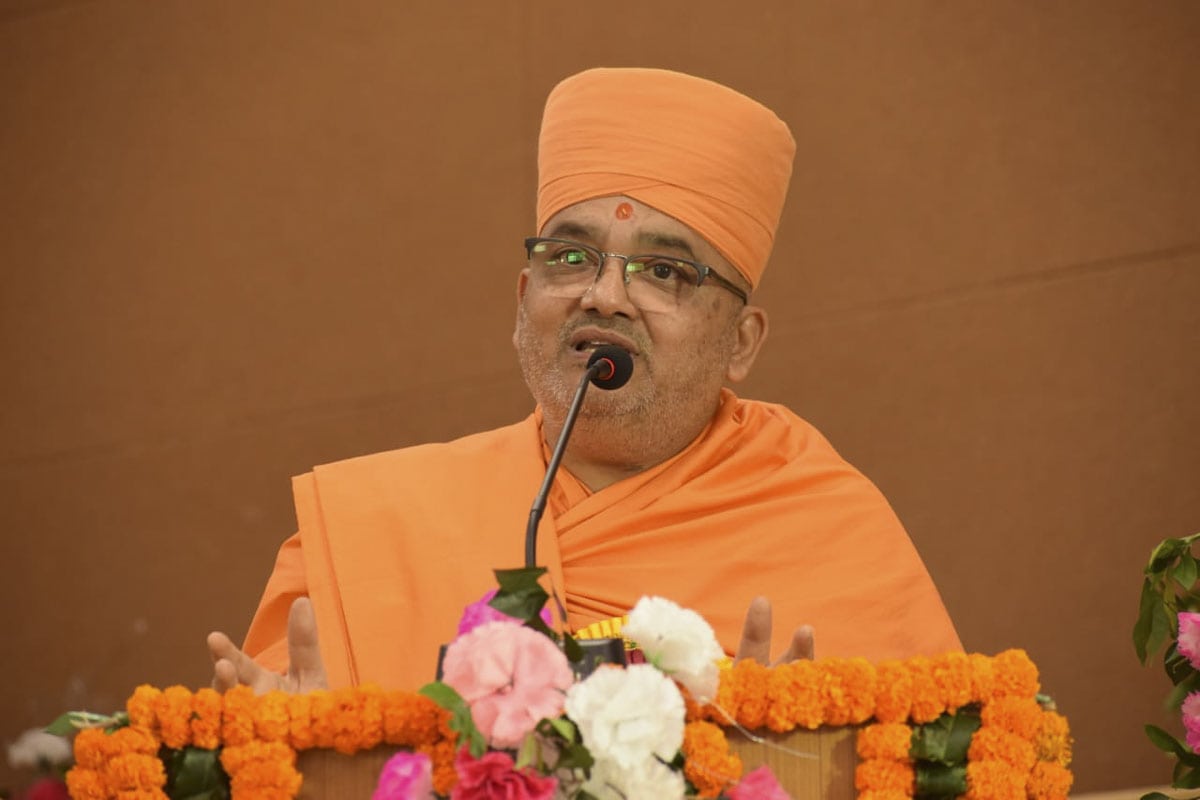 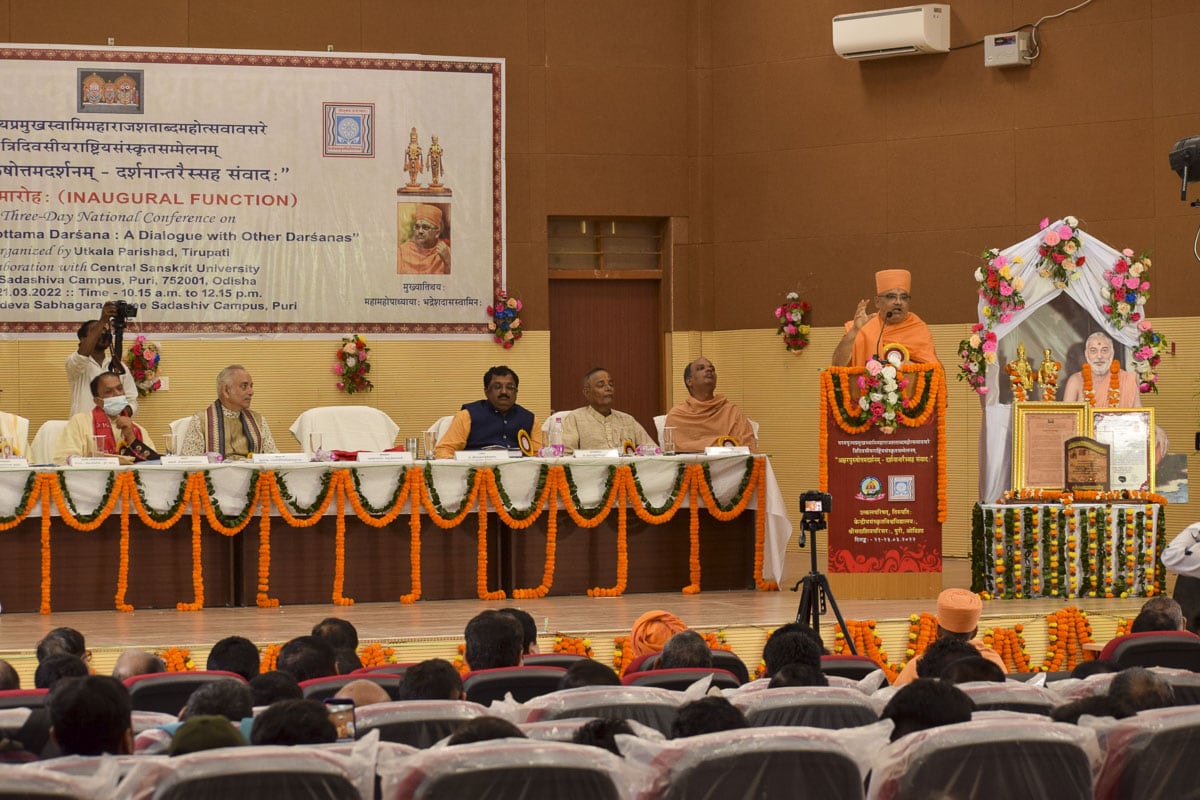 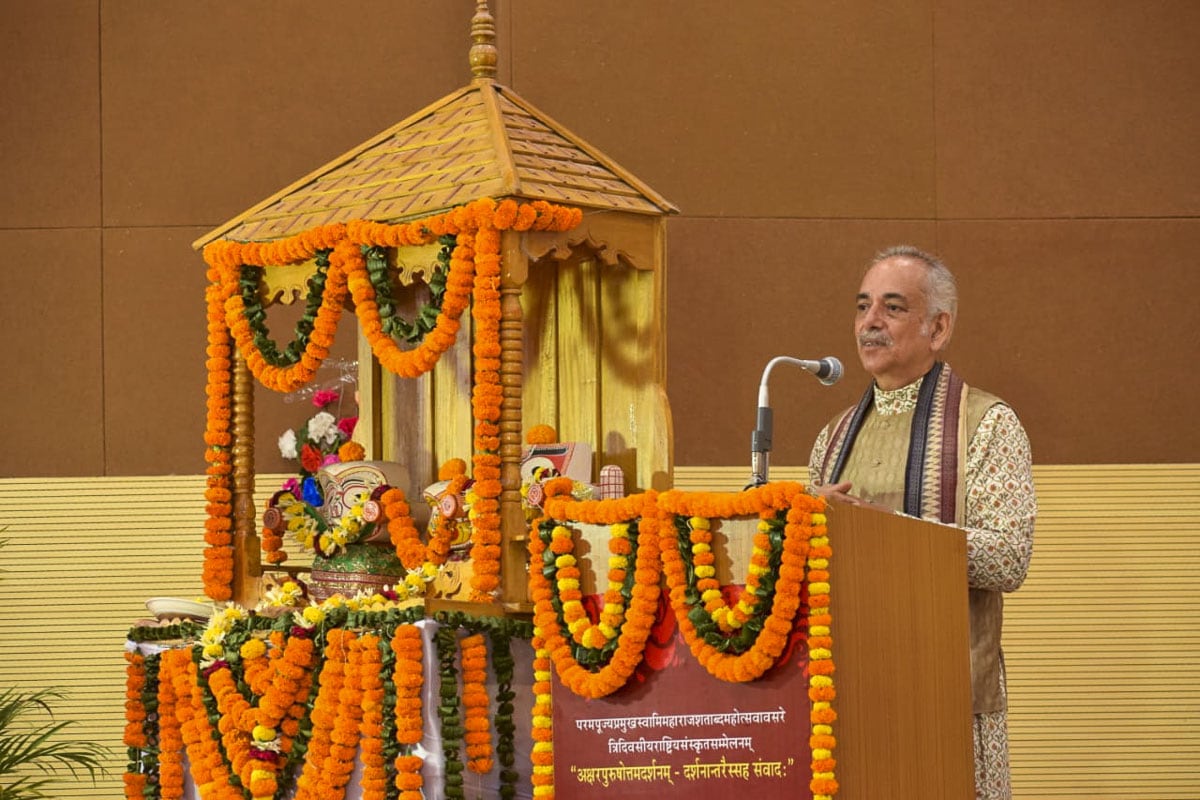