It has been nearly 150 years since a bhashya, or commentary, on any of the Upanishads, Brahmasutras, and the Bhagavad Gita – collectively known as the prasthantrayi – has been written. Inspired by His Holiness Pramukh Swami Maharaj, Bhadreshdas Swami is the latest in the lineage of acharyas to author bhashyas in Sanskrit on the prasthantrayi. The creation of the bhashyas by Bhadreshdas Swami is considered by many scholars to be this century’s most important work in Vedanta philosophy.

Viveksagardas Swami spoke about the significance of writing bhashyas on the prasthantrayi within the Sanatan Vedic tradition as well as the history of Bhadreshdasji’s bhashyas. Viveksagardas Swami also expounded upon the importance and relevance of Bhagwan Swaminarayan’s Akshar-Purushottam Darshan.

Following the addresses of the vice chancellors of the various universities, Doctor Swami gave the concluding remarks.

Bhadreshdas Swami was presented felicitation plaques by the vice chancellors or representatives of the 27 universities.

Many great scholars have written bhashyas on the Upanishads, Brahmasutras, and Bhagavad Gita in the past. Shankaracharyaji’s bhashya was the first of its kind to be recognized within this tradition, followed by the bhashyas written by Ramanujacharya, Madhvacharya, Nimbarkacharya, Vallabhacharya, and others, who respectively went on to establish the Advaita, Vishistadvaita, Dvaita, Dvaitadvaita, Shuddhadvaita and various other schools of Vedanta philosophy.

Baldev Vidyabhushan, the 19th century follower of Chaitanya Mahaprabhu’s Achintyabhedabheda School of Philosophy, was the last author of a bhashya on the Brahmasutras around 150 years ago. Thereafter, no bhashya has been written until Bhadreshdas Swami’s Swaminarayan Bhashyam. Inspired by His Holiness Pramukh Swami Maharaj and blessed by His Holiness Mahant Swami Maharaj, Swami Bhadreshdasji took on this monumental task and made it his life’s work. He presented the completed five-volume, 2,150-page bhashya to Param Pujya Pramukh Swami Maharaj on 17 December 2007 at the BAPS Centenary Celebrations in Ahmedabad.

After Shankaracharya’s bhashya, this is the first time in 1,200 years that a bhashya has been written by one author on all three texts of the prasthantrayi. Also, it is the only time in the history of Vedanta philosophy that a vadgranth has been written by the same author of a prasthantrayi bhashya. Hence, many Vedanta and Sanskrit scholars from around the world consider Bhadreshdas Swami’s works to be one of the greatest accomplishments of modern time.

Through these works, the lost art of writing Sanskrit texts has been revived in this day and age. These texts are not only important for the Swaminarayan Sampradaya, but are gifts to society that will foster the study of Sanskrit and Vedanta for generations to come. 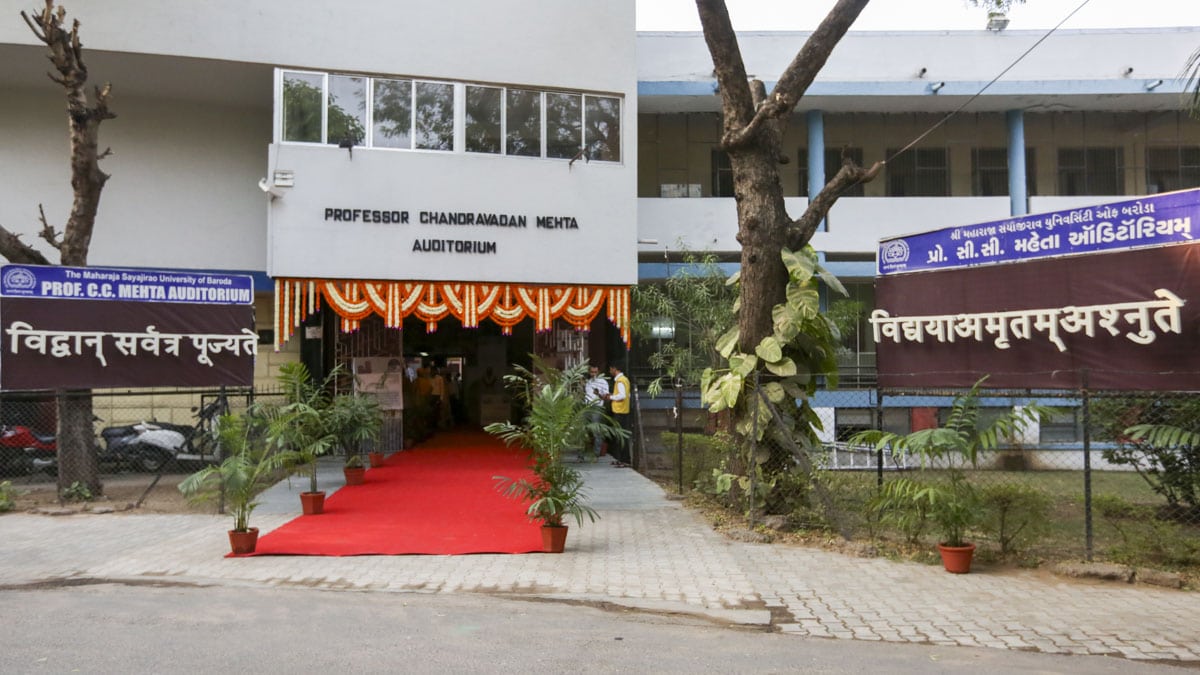 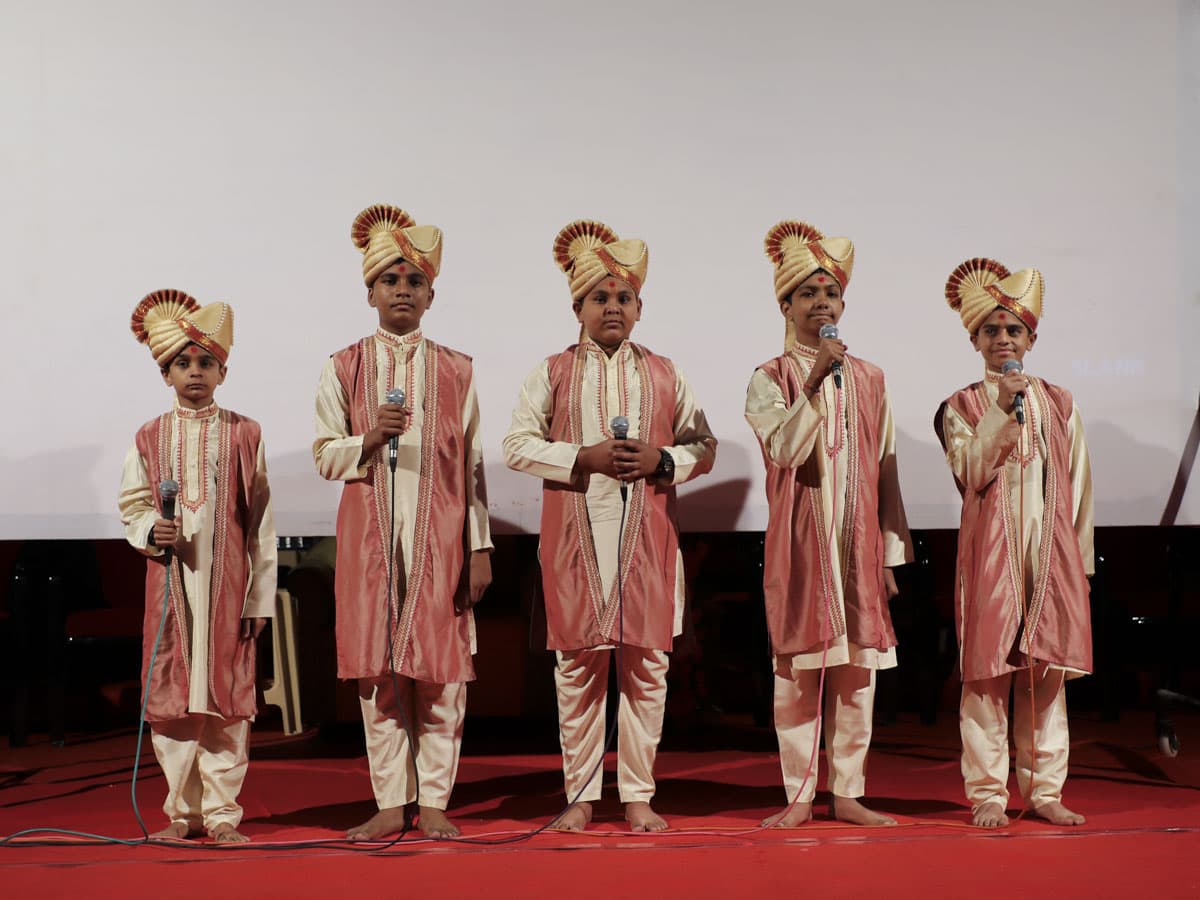 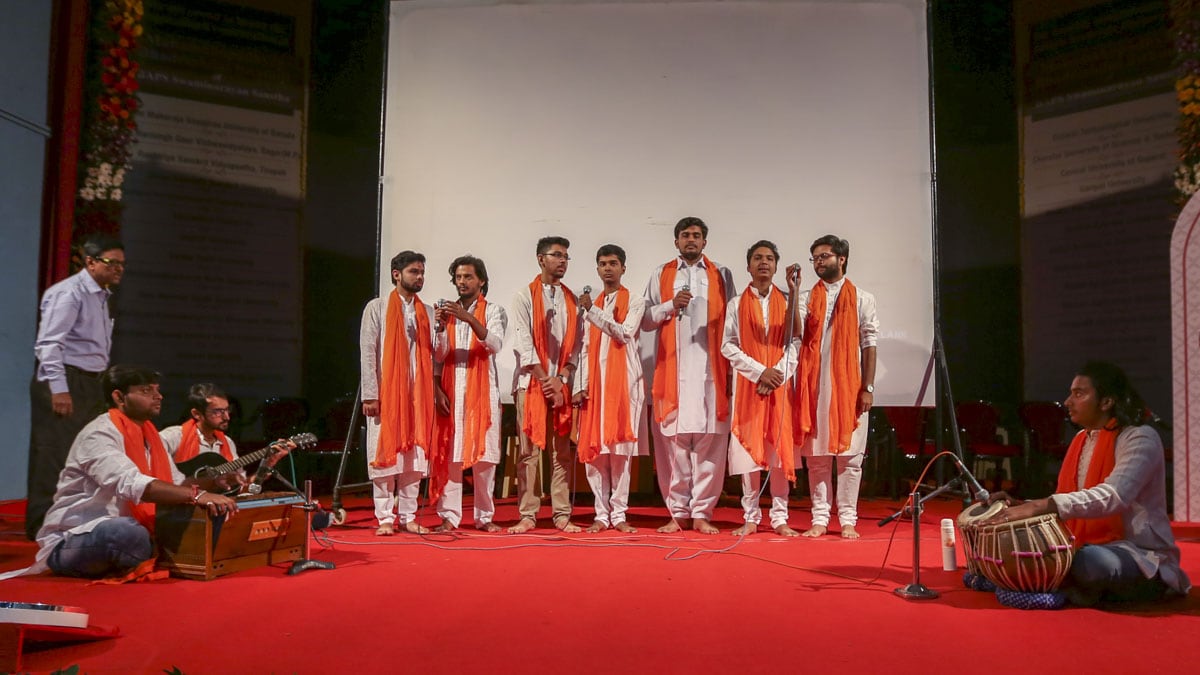 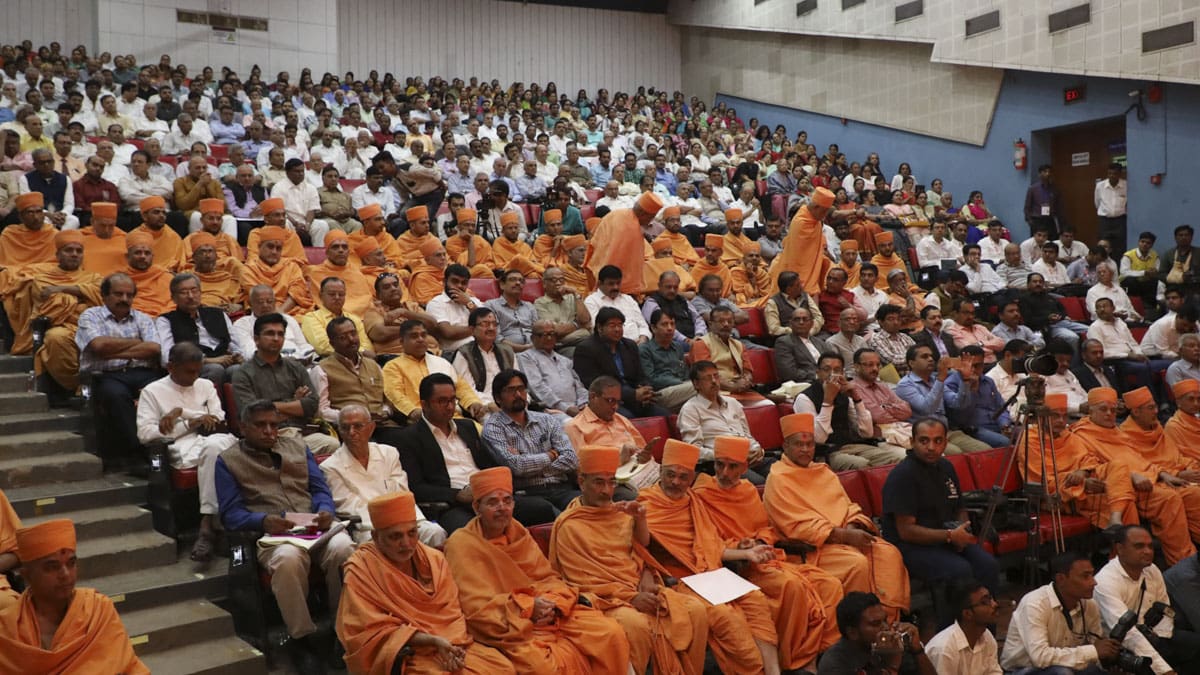 Sadhus, university representatives, and invited guests during the felicitation ceremony 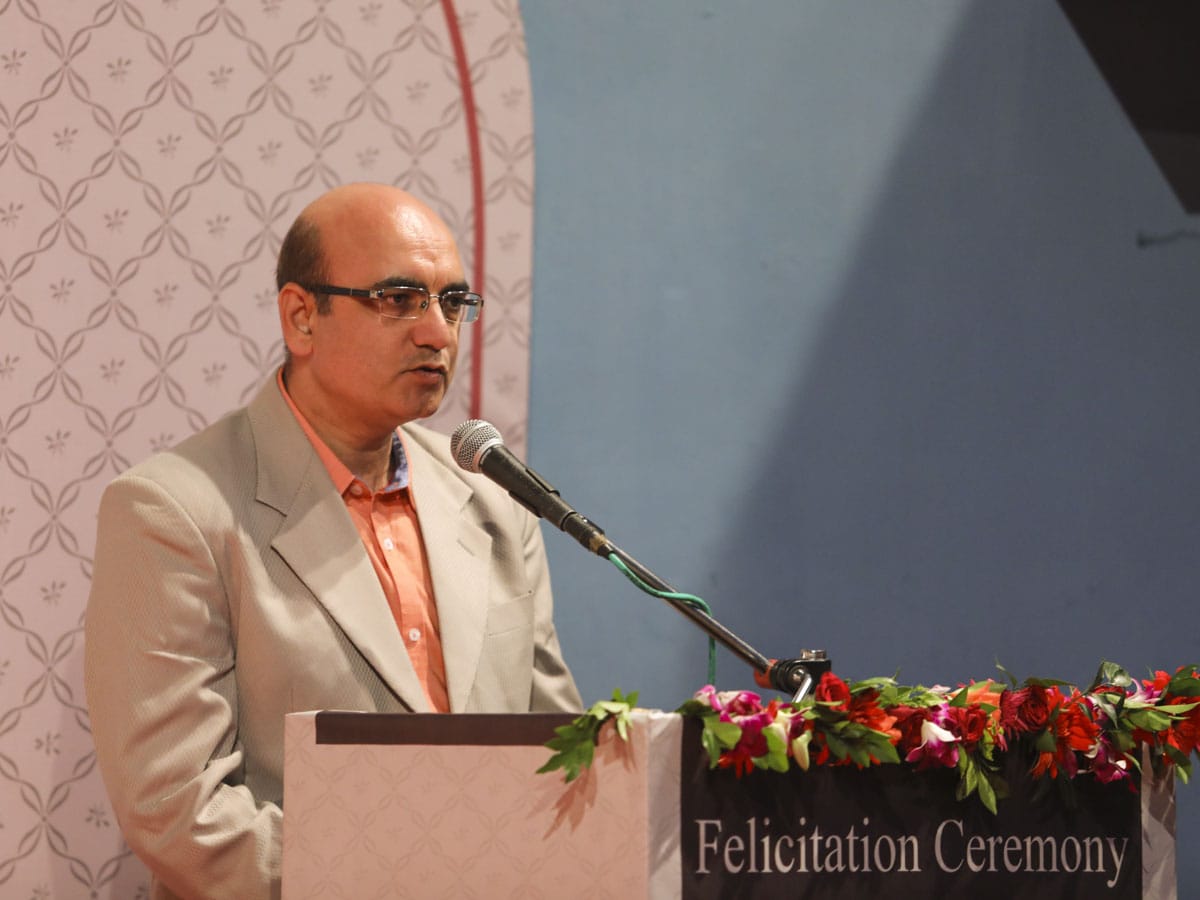 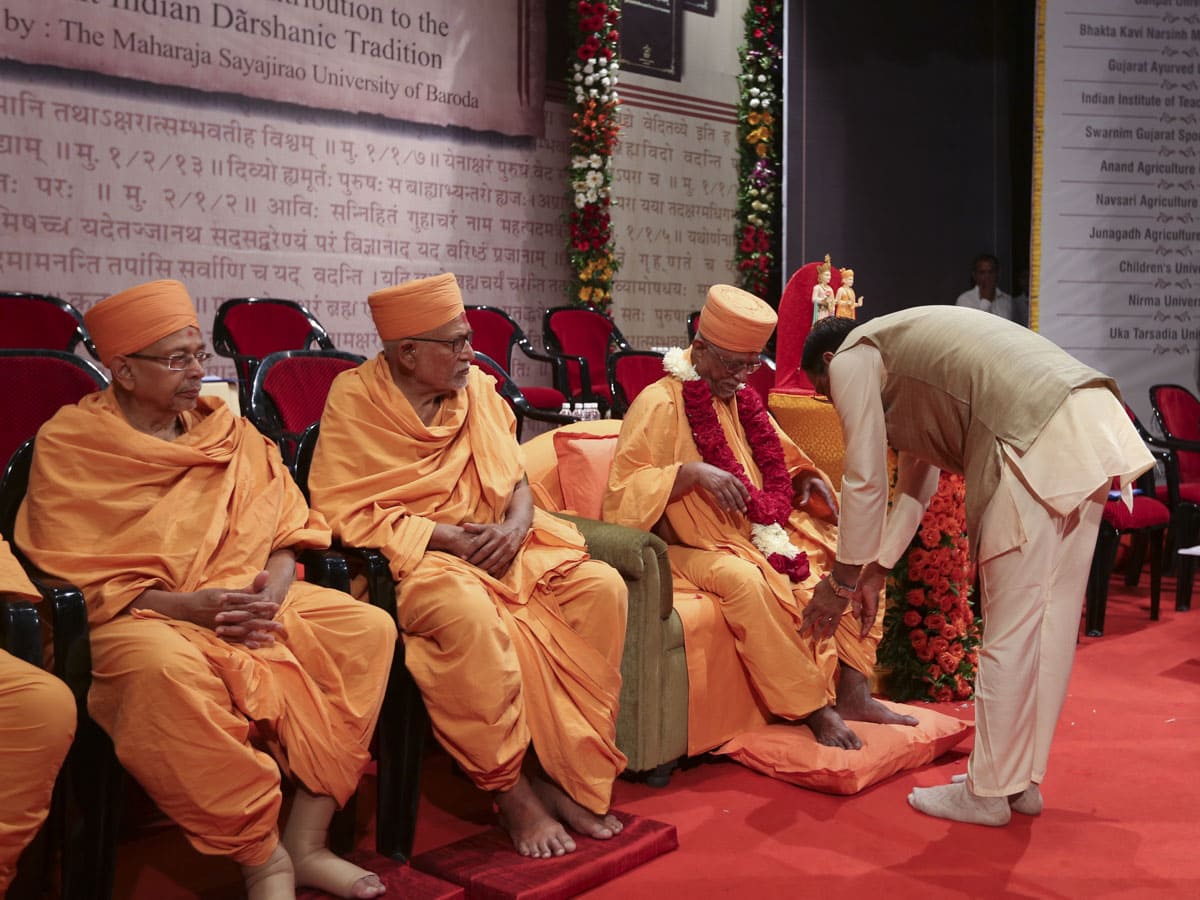