An international academic conference on “The Role of Saints in the Empowerment of Scheduled Castes” was held on 21 December 2022 at the Pramukh Swami Maharaj Nagar in Ahmedabad.  The conference was organized by the BAPS Swaminarayan Research Institute, New Delhi, in collaboration with Guru Ghasidas University, Bilaspur, and Gujarat University, Ahmedabad, as part of the centenary celebrations of His Holiness Pramukh Swami Maharaj.

The diversity of India’s regions, languages, cultures, and other social practices has interested scholars worldwide. Despite the diversity of these traditions, Indian history has witnessed many social challenges. Nevertheless, the saints of India have always strived to address these problems at critical junctions and successfully worked to establish unity, equality, and harmony in society.

During the conference, eminent scholars from around the world presented original research that discovered, reflected upon, and recognized the efforts undertaken by India’s great saints to empower scheduled castes. Attending scholars explored the relevance of their research to contemporary social issues and the role of saints in reforming modern society. The conference also highlighted Pramukh Swami Maharaj’s significant contribution to promoting social empowerment and harmony.

The conference was inaugurated by Pujya Gnaneshwardas Swami. He performed the deep pragatya in the presence of Mahamahopadhyay Bhadreshdas Swami, Aksharvatsaldas Swami, and others. Padma Shri Milind Kamble, the founding member of the Dalit Indian Chamber of Commerce and Industry; Prof. Alok Kumar Chakrawal, Vice Chancellor of Guru Ghasidas Vishwavidyalaya, Bilaspur; Prof. Himanshu Pandya, Vice Chancellor of Gujarat University; Shri Sanjiv Dangi, a member of the Board of Directors, IIM, Ahmedabad; Dr. Bizay Sonkar Shastri, a former Member of Parliament; Shri Ramanlal Vora, a former Education Minister of Gujarat; and Shri Devji Rawat, the National Secretary of the Vishva Hindu Parishad, were among the dignitaries who graced the inaugural ceremony.

Prof. Himanshu Pandya welcomed more than 150 dignitaries to the conference. Thereafter, Prof. Milind Kamble presented the inaugural speech of the conference in which he acknowledged the efforts of socio-spiritual organizations like BAPS in spearheading efforts to promote social harmony. In his keynote speech, Prof. Alok Kumar Chakrawal emphasized the significant contributions of Bhagwan Swaminarayan in establishing equality at the grass-root level. He remarked, “Shriji Maharaj (Bhagwan Swaminarayan) not only envisioned but also actively enabled social harmony over 200 years ago.” He added, “In his lifetime, Shriji Maharaj constructed six mandirs, initiated 500 paramhansas, and authored the Shikshapatri to convey a universal message of equality.” Bhadreshdas Swami concluded the inaugural session by emphasizing the need to bring about change guided by the principles outlined in the smrutis. He noted that the Satsaṅgadīkṣā is one such smruti. It is a modern smruti that not only preserves the past but also addresses contemporary challenges. He concluded by pointing out that Bhagwan Swaminarayan’s efforts extended beyond just caste discrimination and included removing all forms of inequality, including those based on class, race, and gender.

The Plenary and Presentation Sessions

The inaugural session was followed by a plenary session. Shri Tarun Vijay, a former Member of Parliament, chaired and commenced the session. Shri Sanjiv Dangi began his presentation by asking: “Has our culture failed us, or have we failed it?” He stressed our neglect in recognizing the contribution of saints, especially those of Gujarat, who strived to empower society. He also expressed the need to implement the principles of Bhagwan Swaminarayan and other saints to promote social unity and harmony. Dr. Kalpesh Bhatt, an Assistant Professor at the University of Mary Washington, then presented on sociocultural pluralism. He explained the significance of identity in removing caste discrimination. He noted the important contributions of Pramukh Swami Maharaj in enabling such realization in the lives of many. Bhadreshdas Swami concluded the session by highlighting the impact of saints like Pramukh Swami Maharaj in alleviating social discrimination at a global level.

The plenary session was followed by parallel sessions in which many scholars presented their papers on the role of saints in empowering communities from diverse perspectives.

Shrutiprakashdas Swami, Mangalnidhidas Swami, Dr. Bizay Sonkar Shastri, Shri Kishor Makwana, Shri Ramanlal Vora, and Dr. Jyotindra Dave presented their research at the conference’s concluding session. The opening address of this session was delivered by Dr. Bizay Sonkar Shastri, who expressed his gratitude to Mahant Swami Maharaj for inspiring the Pramukh Swami Maharaj Nagar–an appropriate venue for the conference. He concluded, “If we are to find solutions to the challenges faced by scheduled castes, the Swaminarayan tradition would be the place to discover them.”

Thereafter, Shri Ramanlal Vora emphasized the role of the Swaminarayan tradition in establishing social harmony while keeping spirituality at its center. Shri Kishor Makwana also remarked that the conference was a tribute to Pramukh Swami Maharaj’s proficiency in translating social awareness into constructive action.

Finally, Aksharvatsaldas Swami expressed his gratitude to all the presenters and attendees of the conference. He particularly thanked Shri Ravindra Kirkole for his immense support in making the conference a success and appreciated the organizers for facilitating its constructive dialogue.

The delegates found the conference to be an engaging platform that promoted essential conversations on social empowerment and eliminating social disparities. Attendees also felt the conference encouraged interdisciplinary and diverse perspectives and emphasized the need and means to transcend all forms of social division. 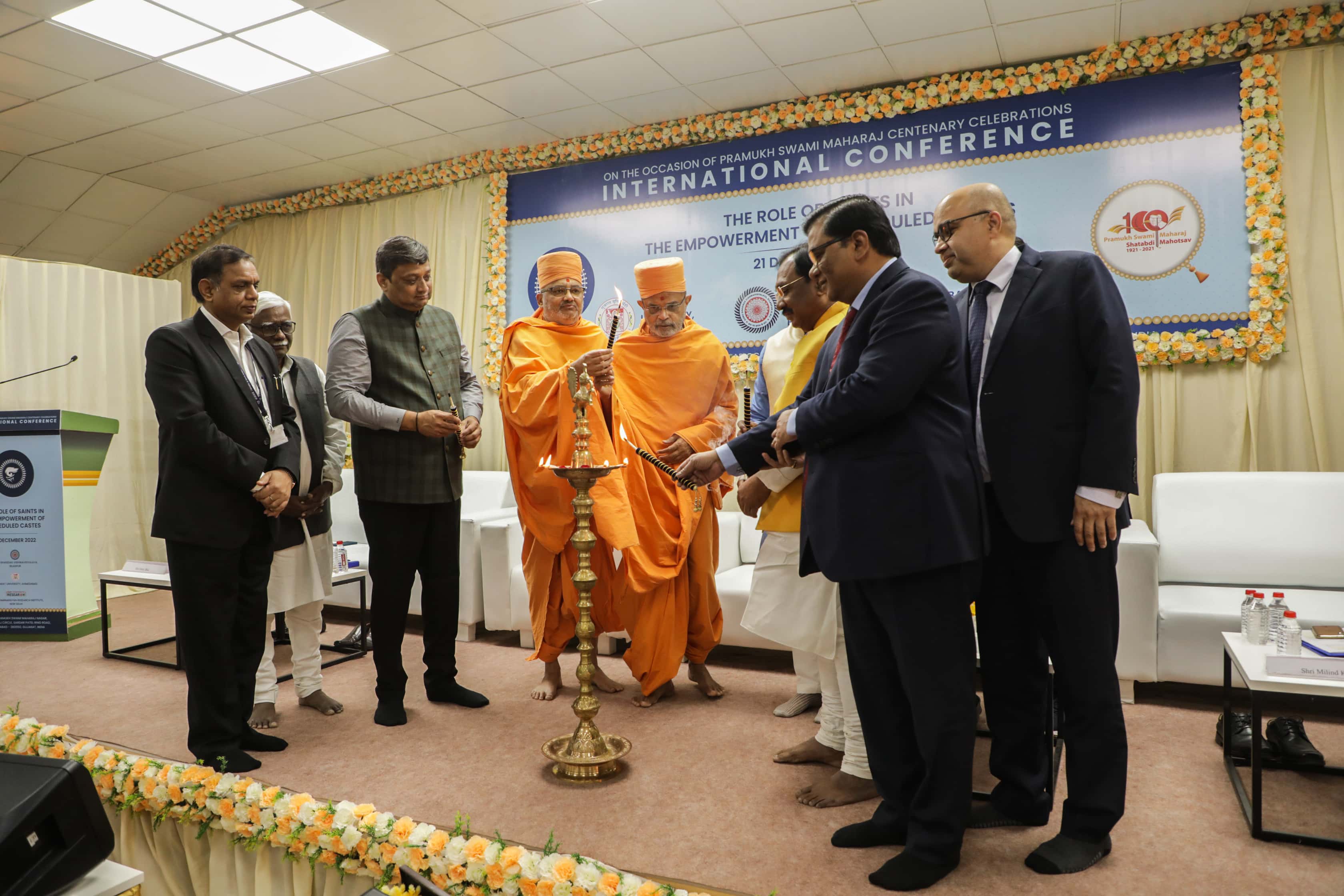 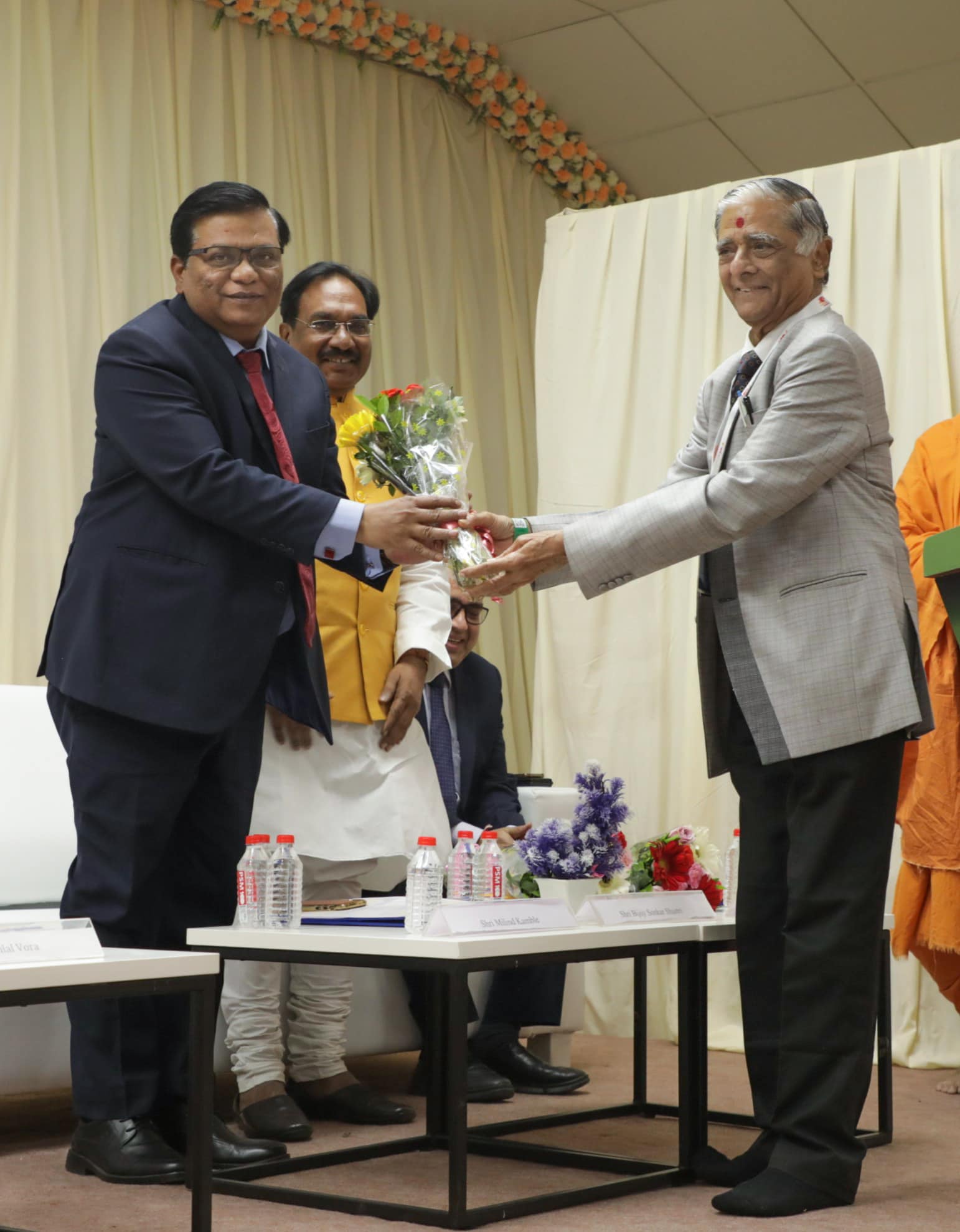 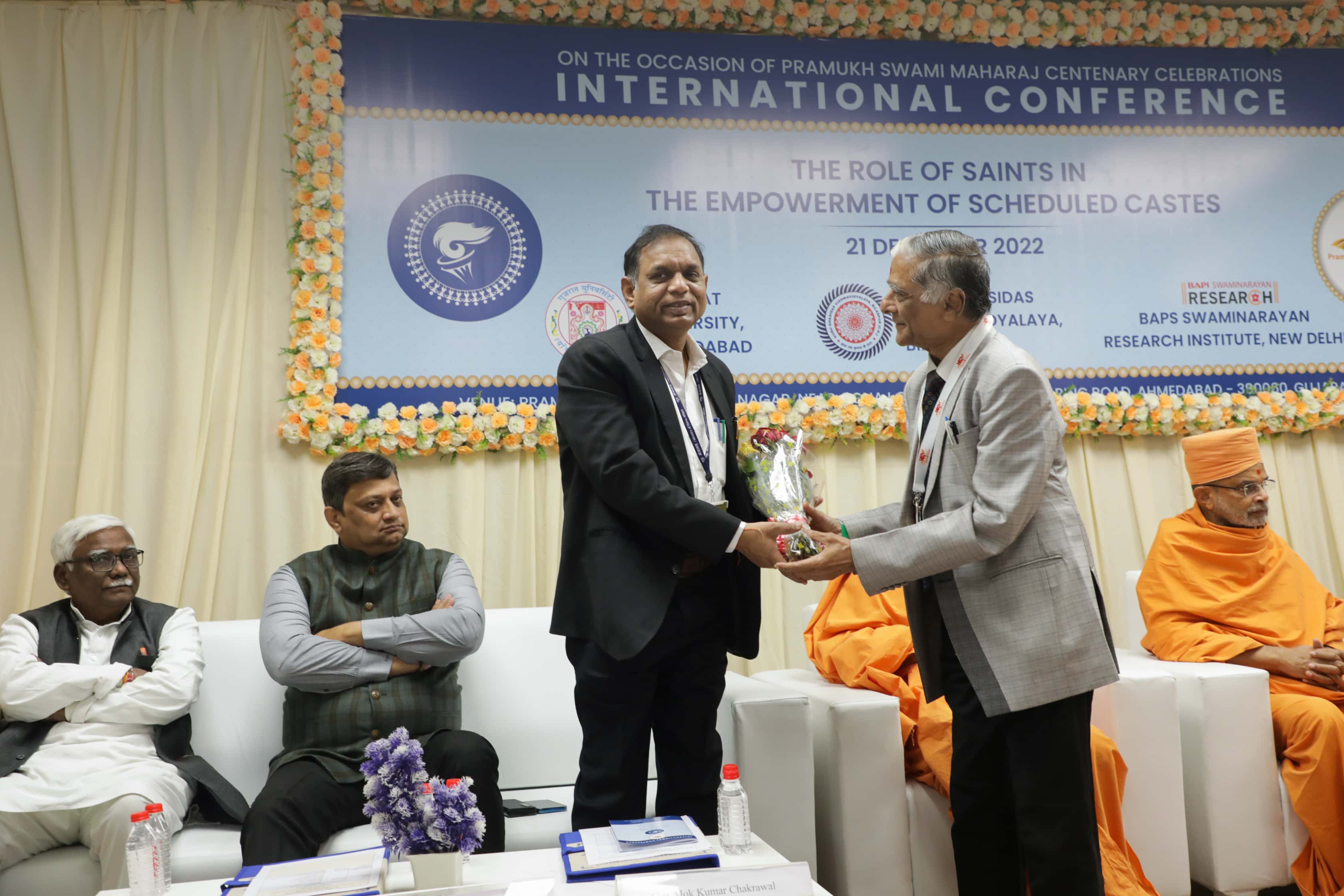 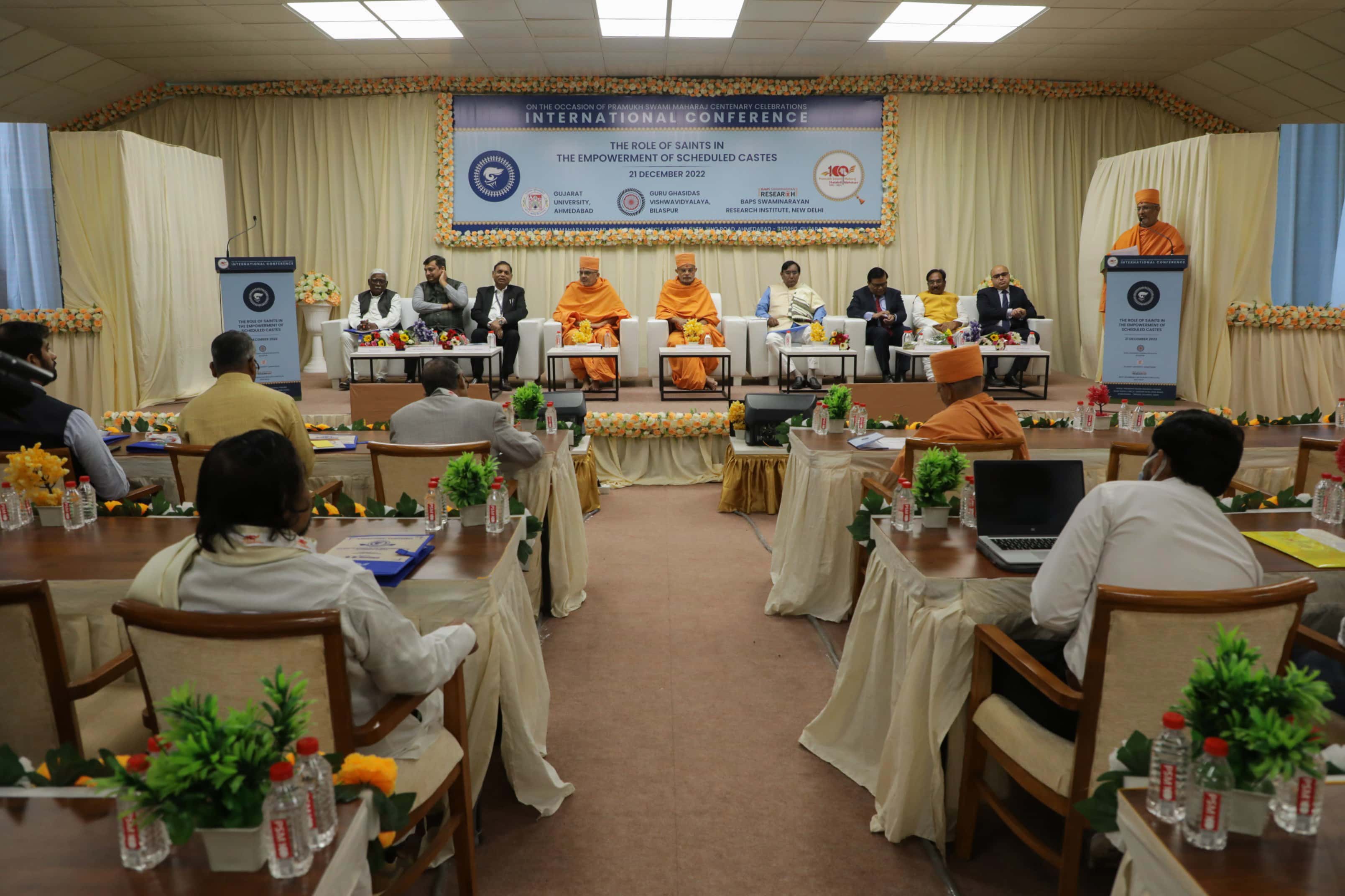 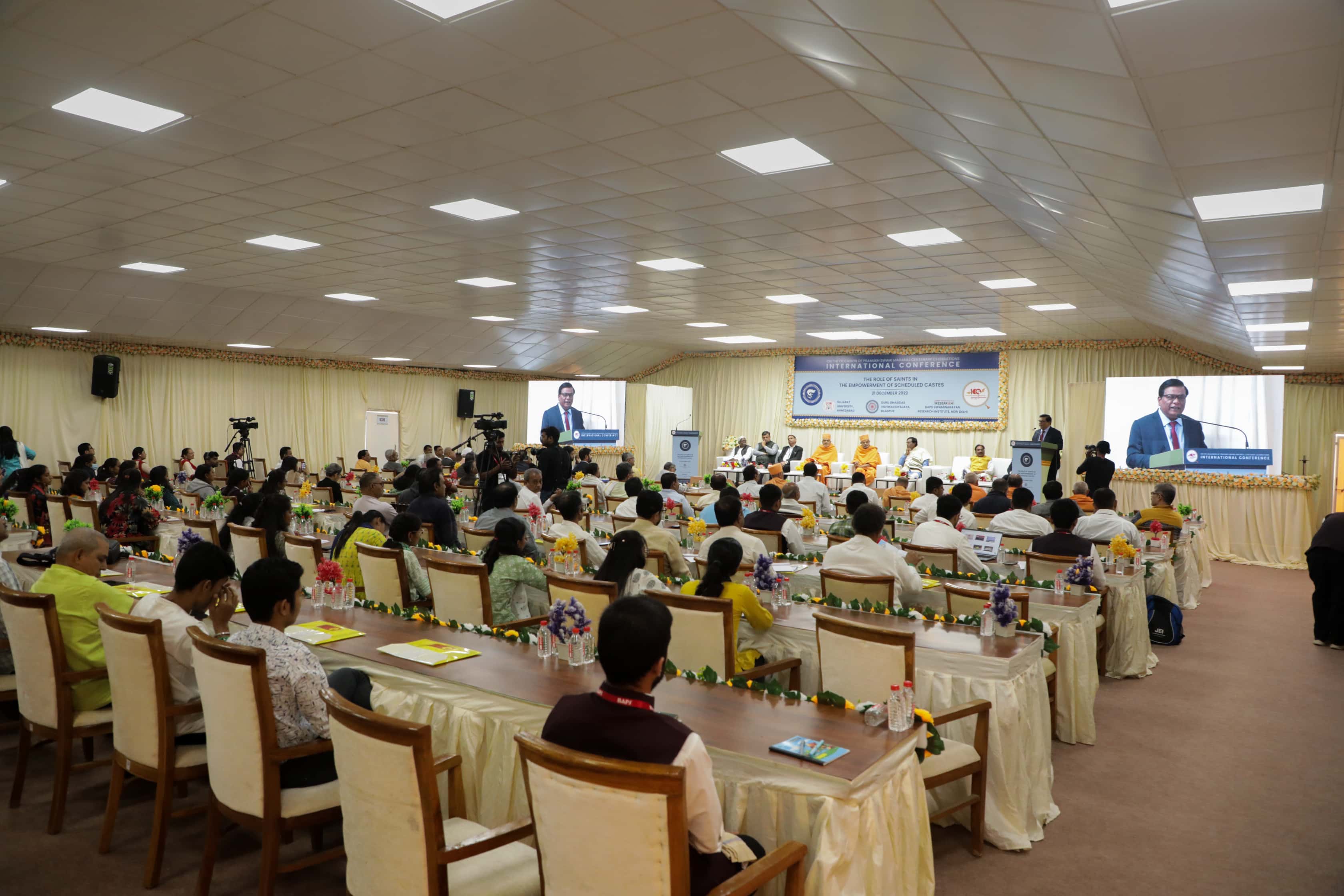 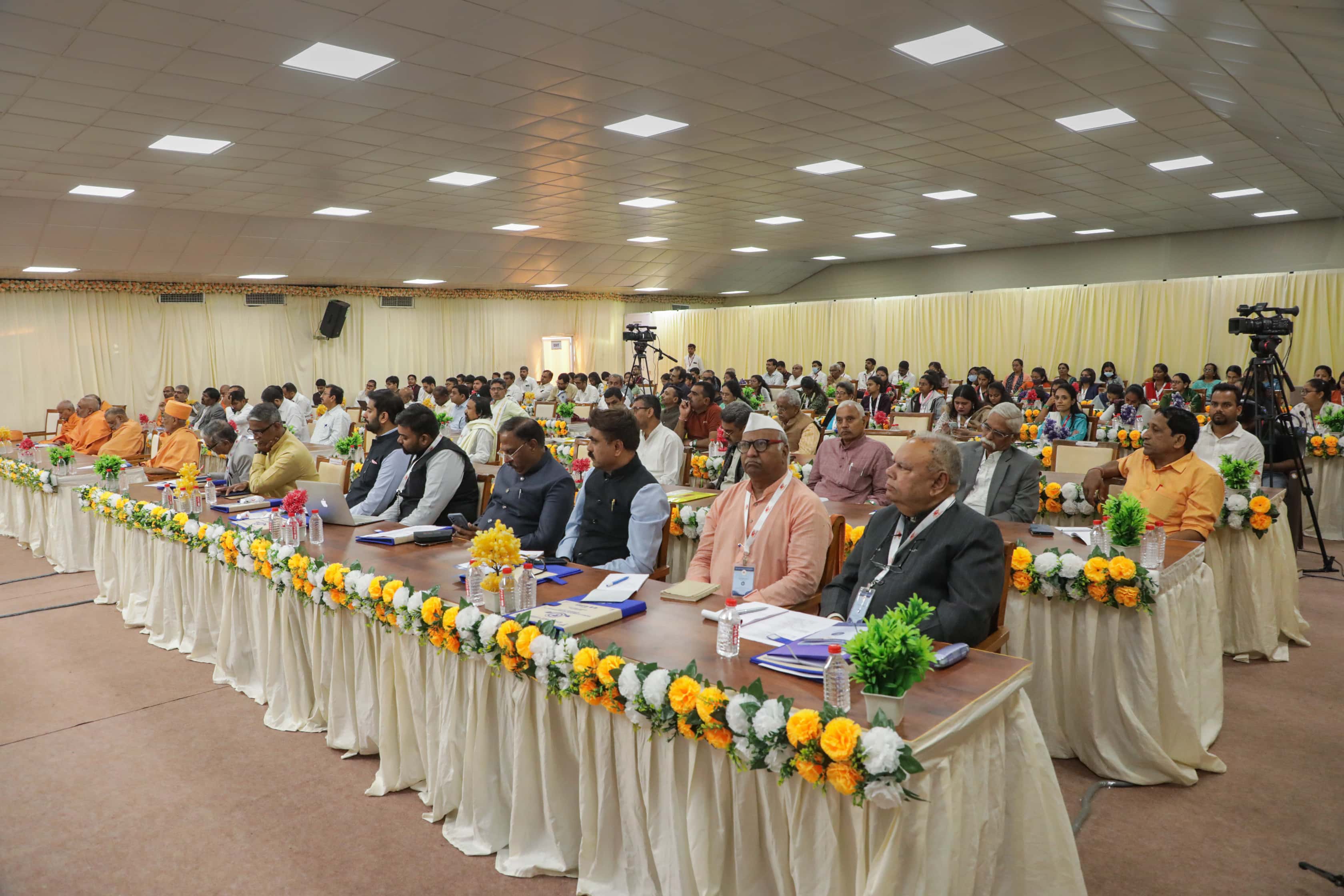 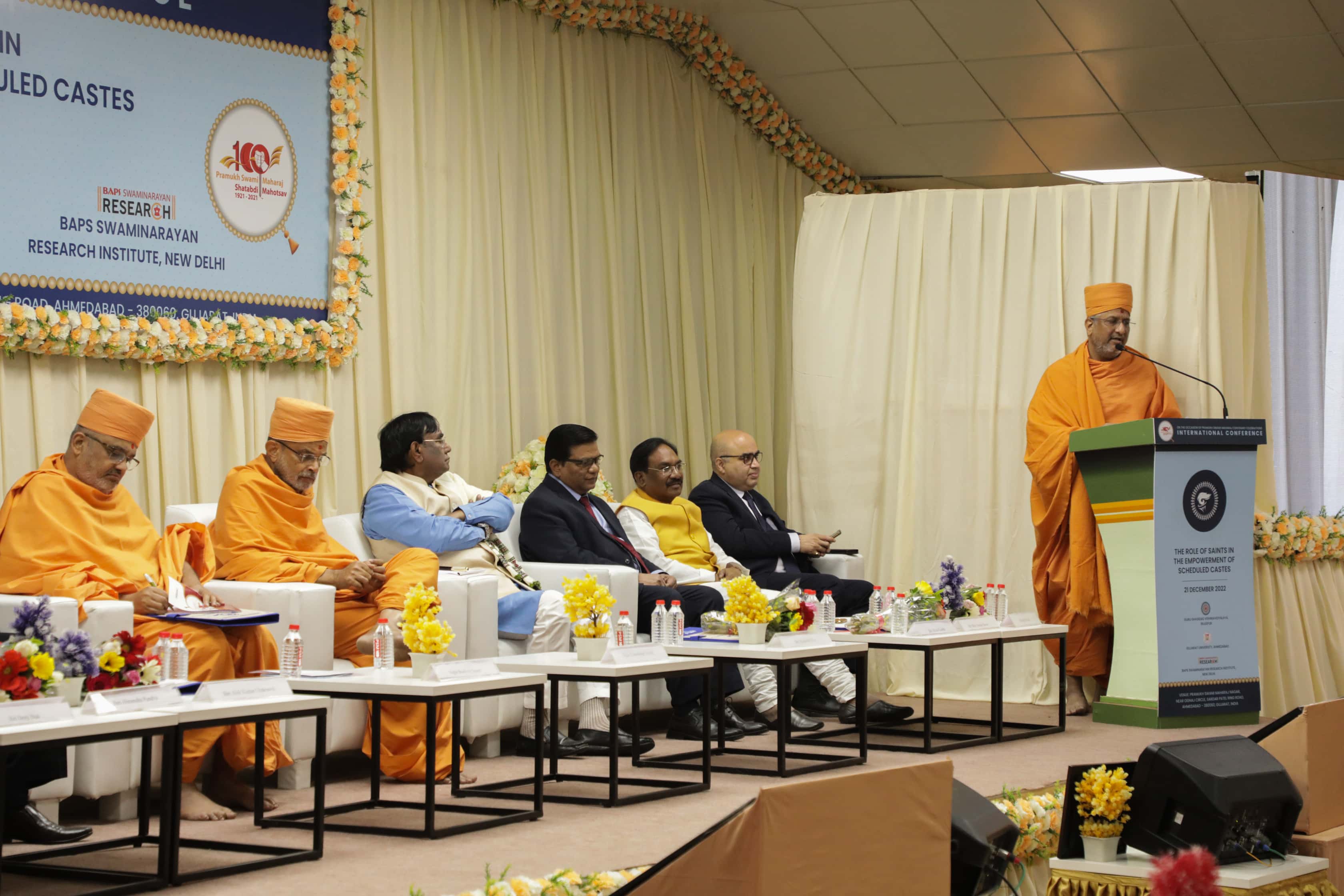 Aksharvatsaldas Swami commencing the Inaugural Session of the Conference 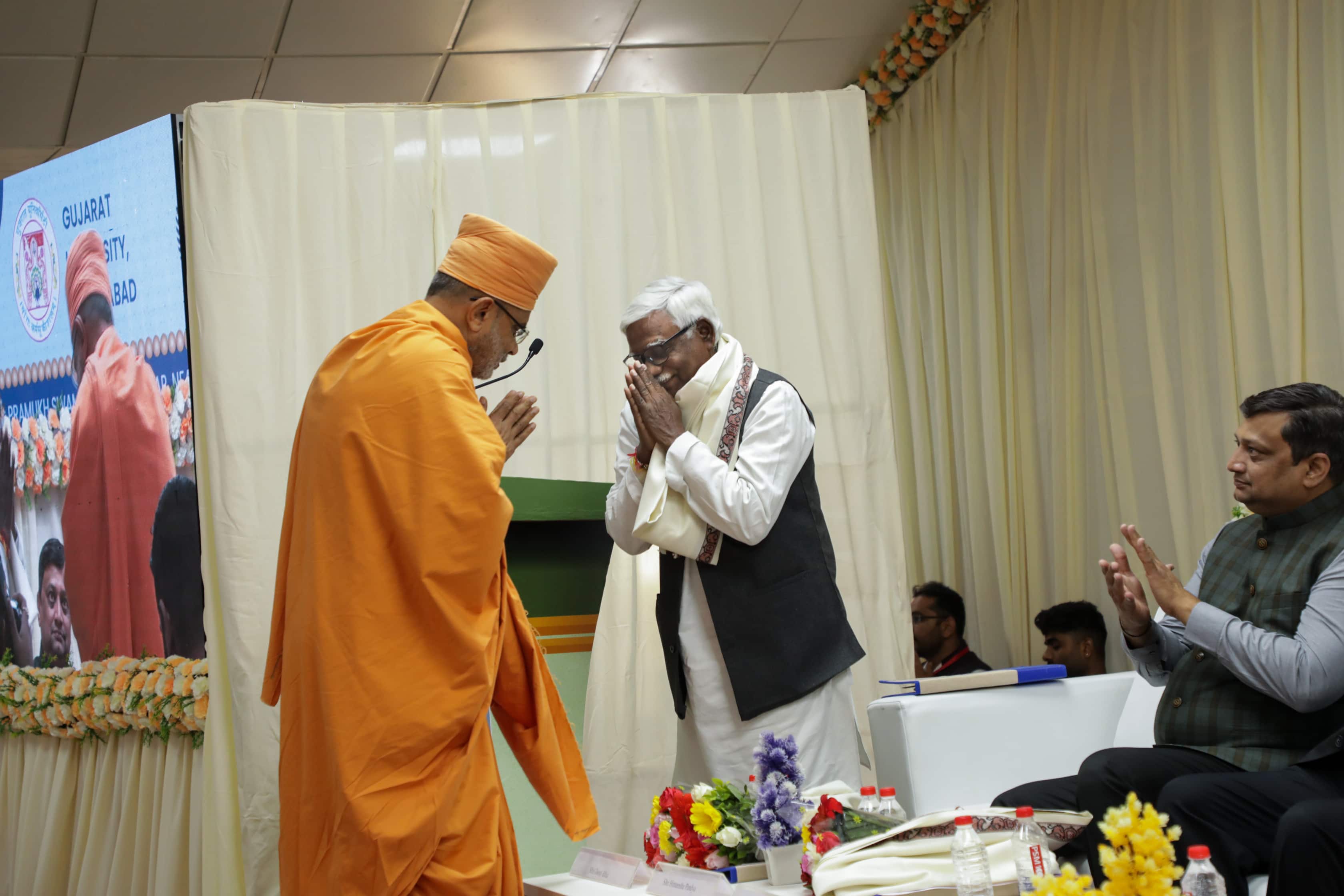 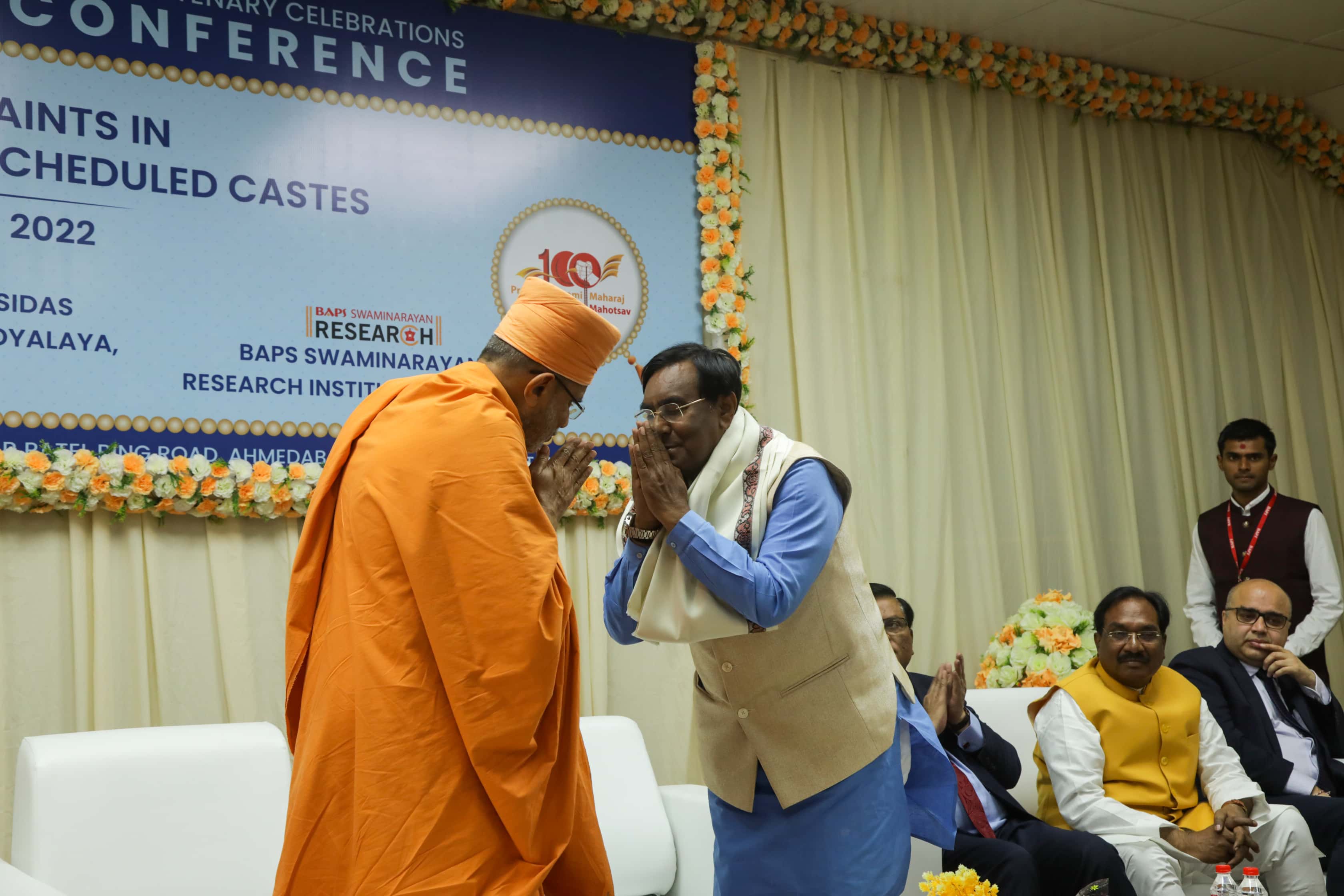 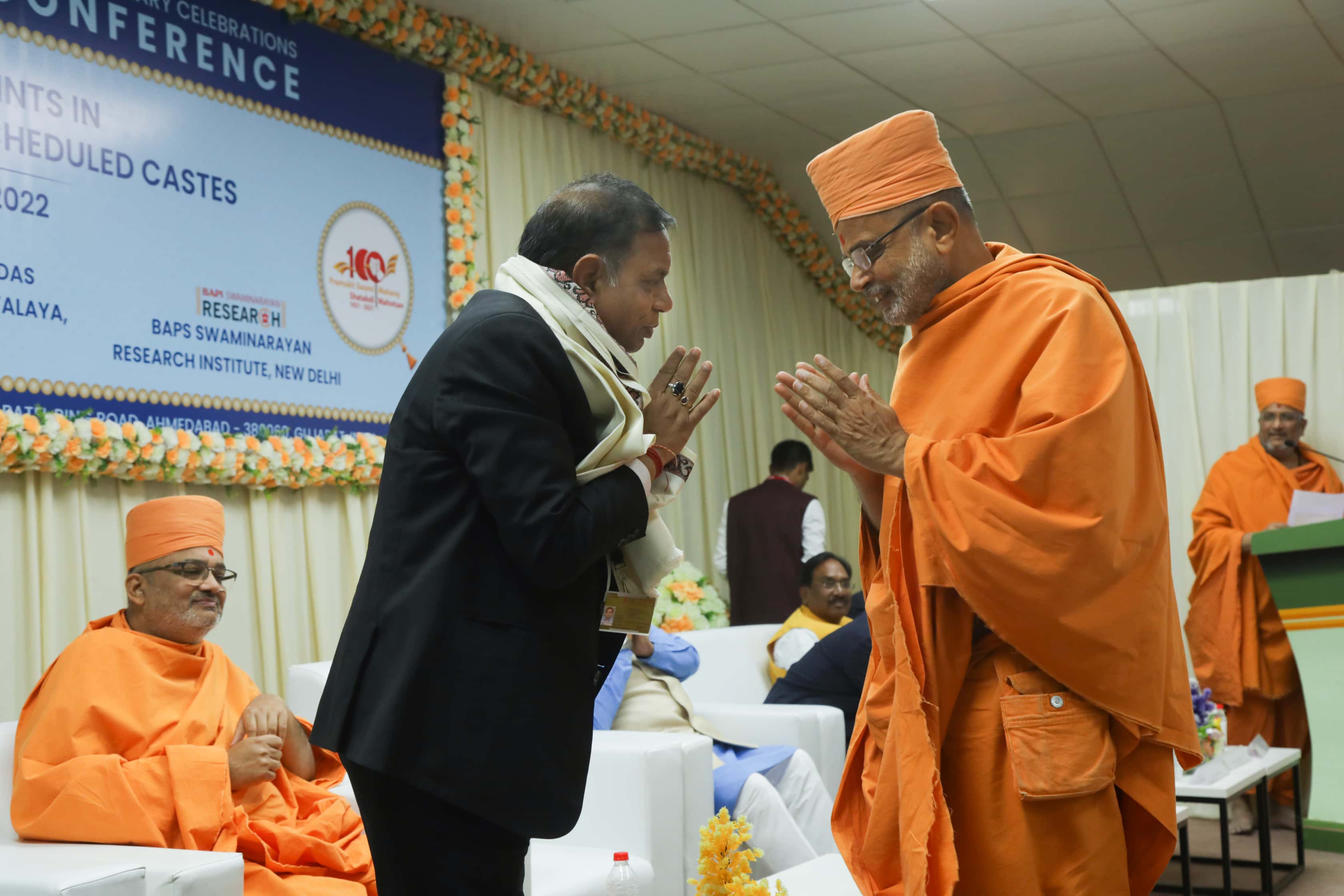 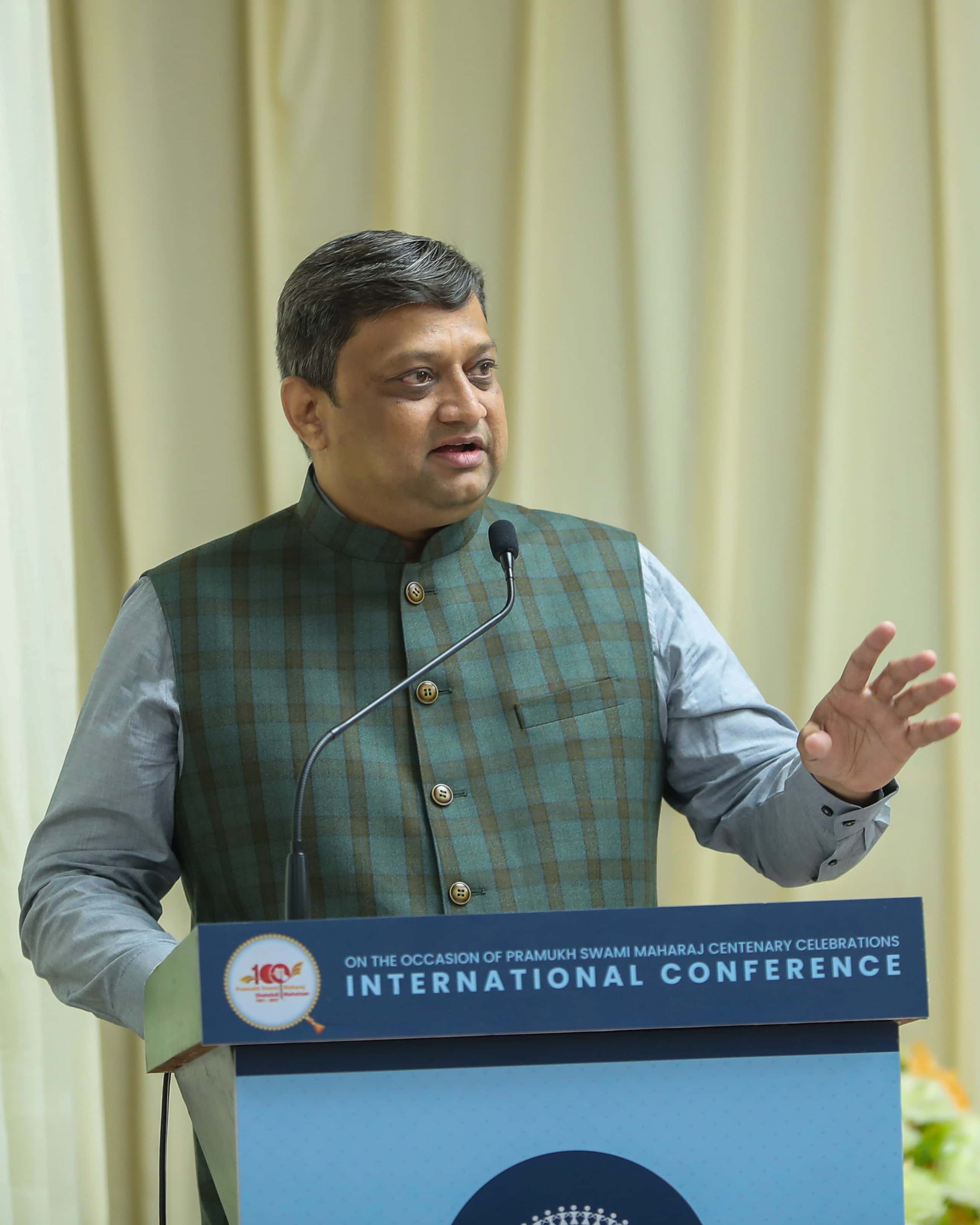 Shri Himanshu Pandya, the Vice Chancellor of Gujarat University, delivering the Welcome Address of the Conference 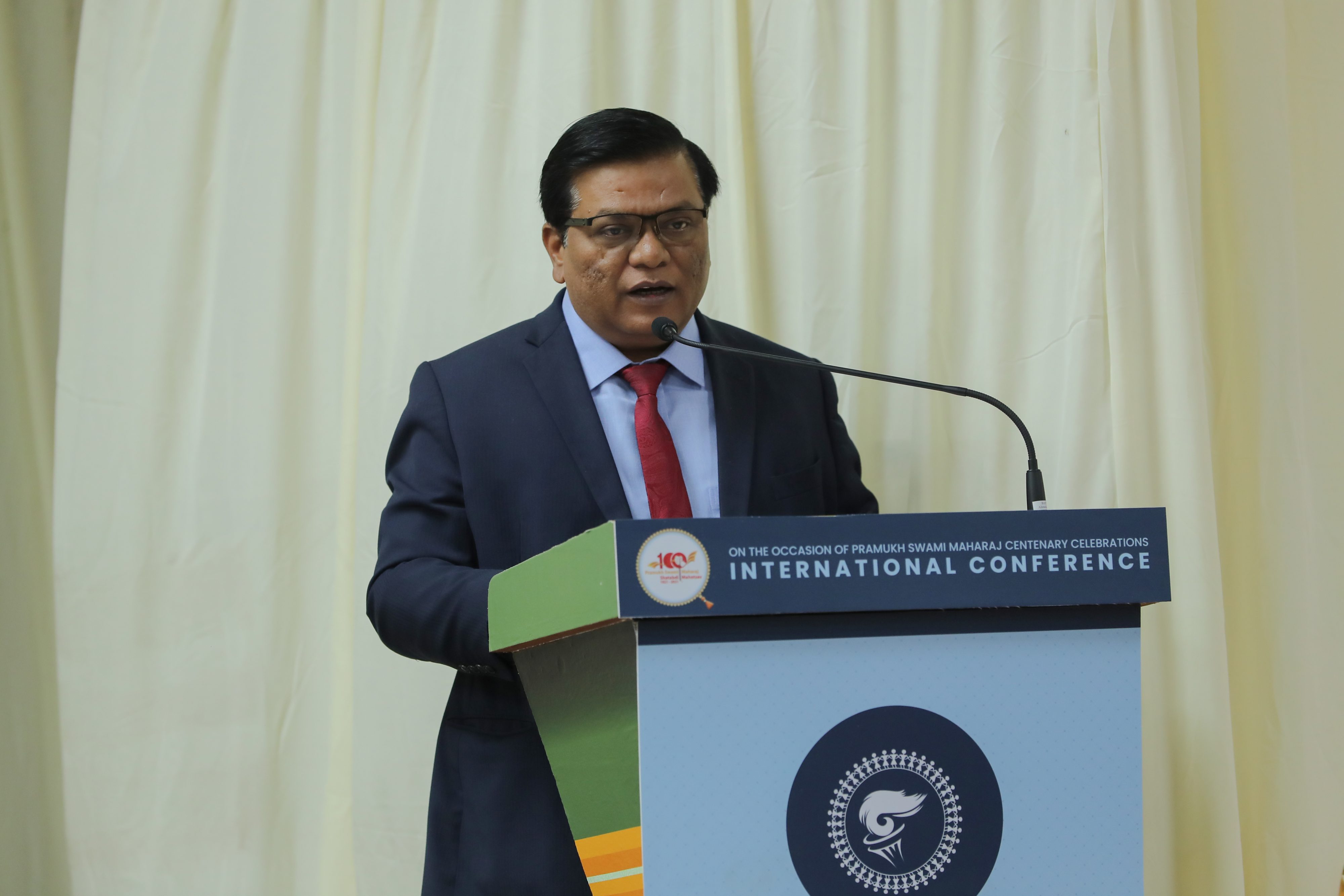 Shri Milind Kamble, the Chairman of IIM Jammu delivering the Inaugural Address of the Conference 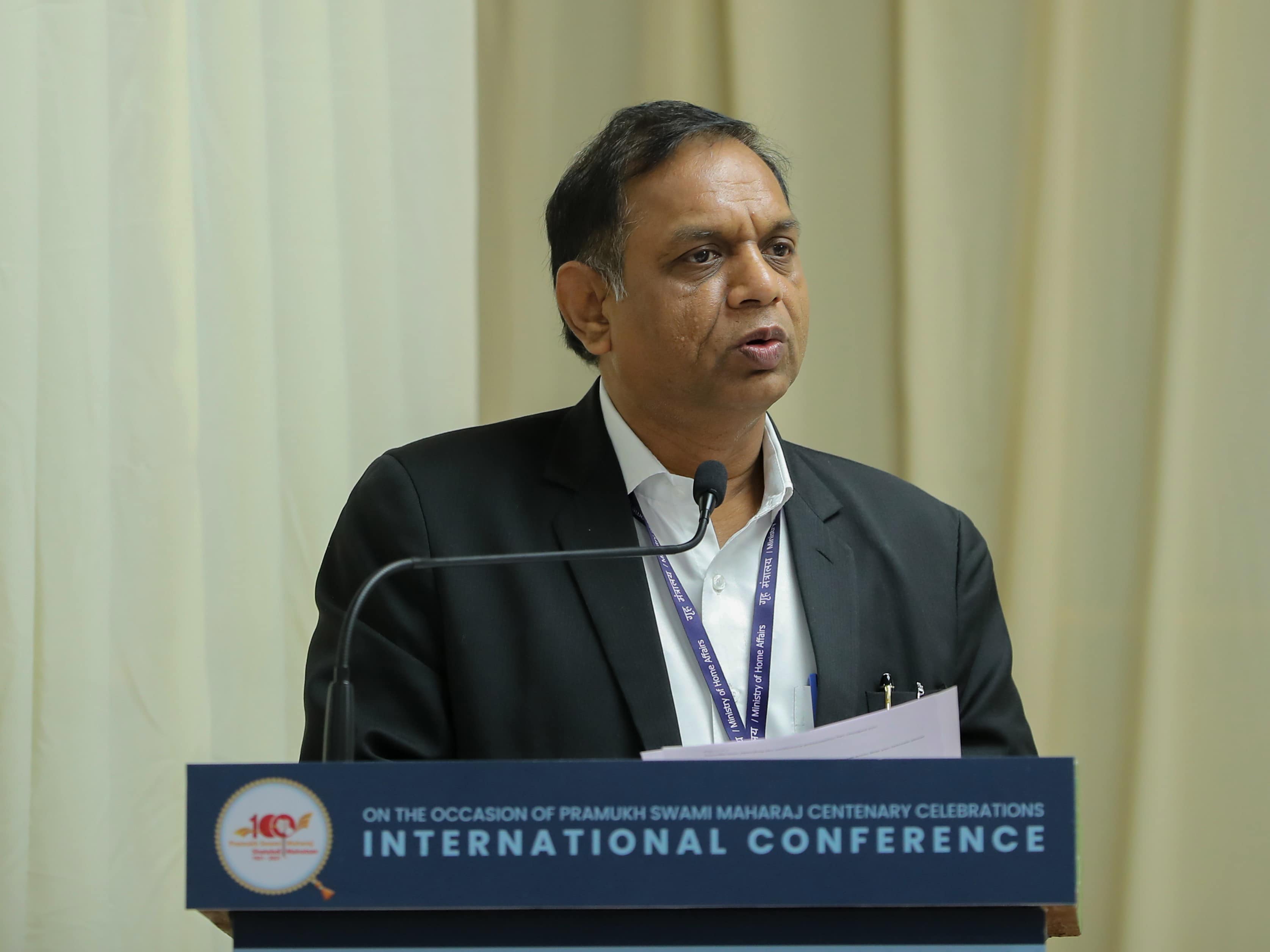 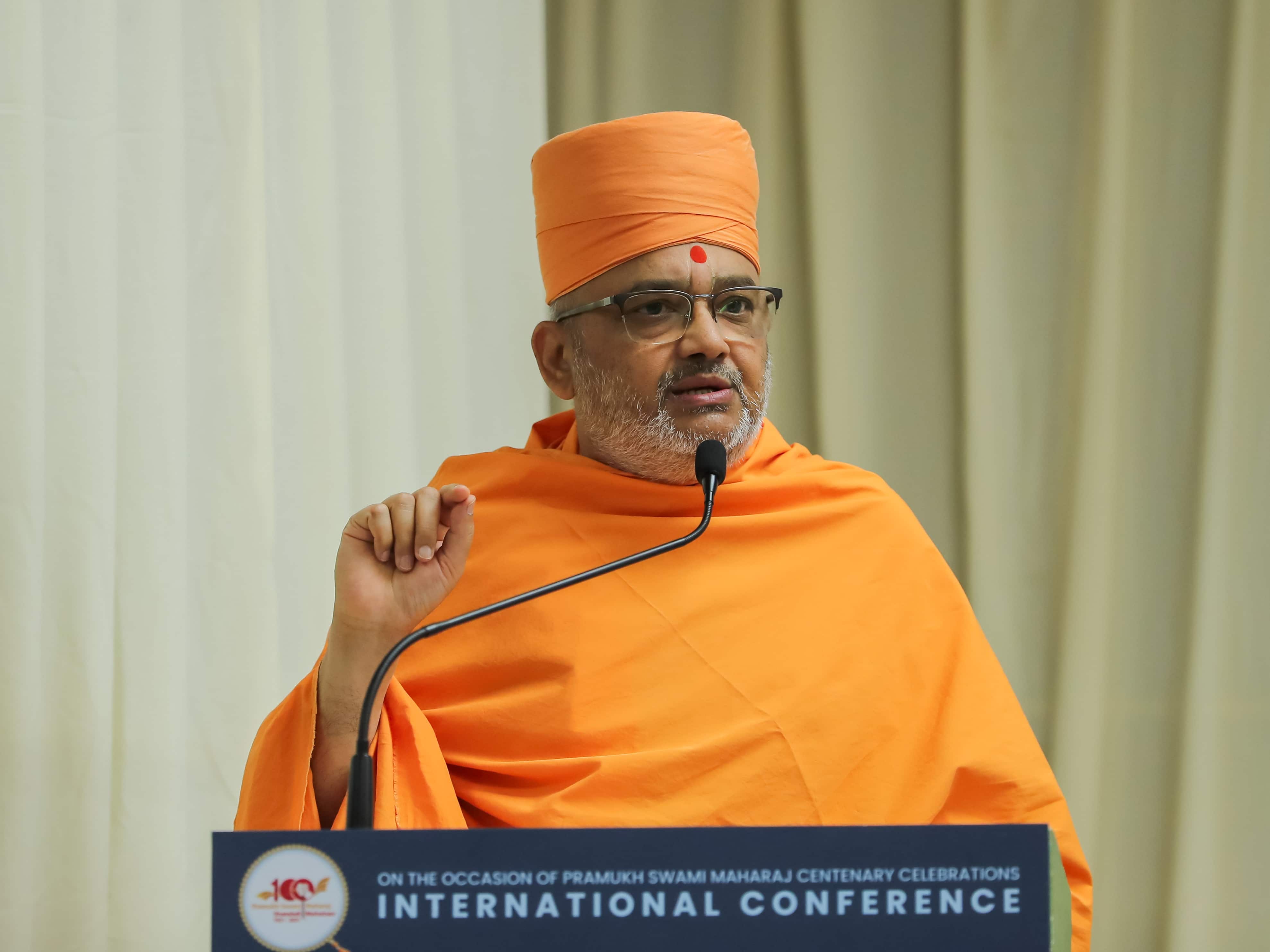 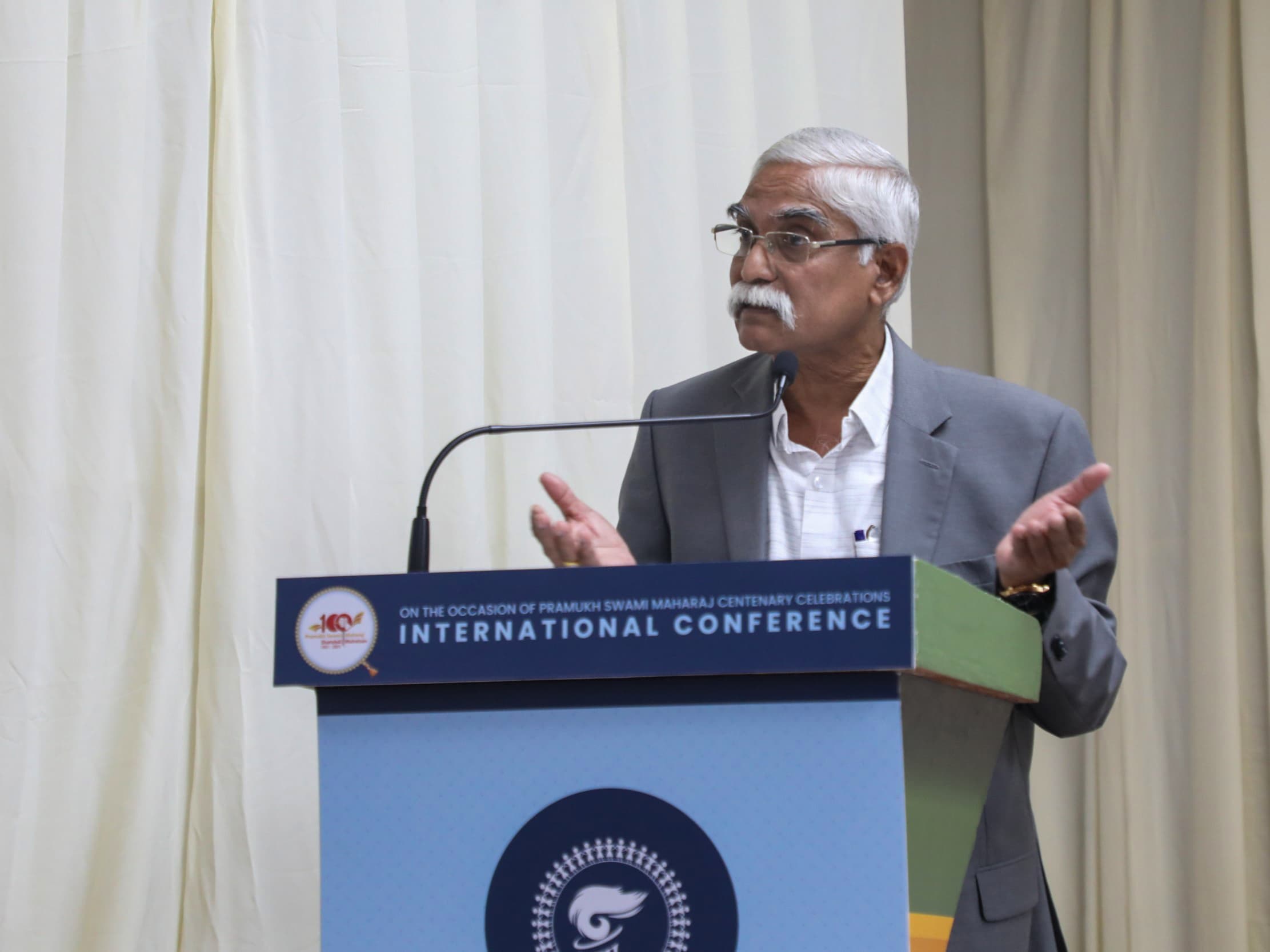 Shri R.S. Sarraju, the Vice Chancellor of the University of Hyderabad, addressing the Plenary Session