Under the auspices of the Brahmaswarup Pramukh Swami Maharaj Centenary Celebrations and to mark its 75 years, the Bansilal Amritlal Krushi Mahavidyalaya, Anand Krushi University, Anand, in association with AARSH Research Institute, Swaminarayan Akshardham, Gandhinagar, organized a seminar on the topic ‘Krushi Maharshi: Pramukh Swami Maharaj’ at the BACA Auditorium. The seminar highlighted Pramukh Swami Maharaj’s invaluable contributions in the field of agriculture and his colossal efforts in the conservation of water.

Following inaugural prayers and the traditional lighting of the lamp, a video highlighting Pramukh Swami Maharaj’s exemplary planning, decision-making and foresight in the fields of water conservation and agricultural activities was shown.

In his speech, Prof. Shrutiprakashdas Swami highlighted Pramukh Swami Maharaj’s keen interest in farming and how he guided farmers about crop selection, effective farming techniques and identification of livestock useful for farming. He also described Swamishri’s efforts during the 1987 drought in Gujarat to set up four cattle camps to care for more than 10,000 animals endangered by the drought. Also highlighted was Swamishri’s support to the Gujarat government to implement the Narmada irrigation project. At the initial stage of the scheme, when there was an obstacle for a loan from the World Bank, he appealed to all to invest in the Narmada Srinidhi Bonds and BAPS Sanstha made the first contribution of Rs. 51 lakh. Swamishri also steered other activities for water conservation like recharging wells and tree planting. In 1999, Swamishri sent BAPS sadhus to Israel to learn scientific farming. As a result, Yagnapurush Vadi in Sarangpur is an ideal model for all. Today, Param Pujya Mahant Swami Maharaj, a former student of the BA College of Agriculture in the 1950s, continues to encourage the fields of agriculture and animal husbandry.

At the end, Bhagwatcharandas Swami narrated the ways in which the gurus have blessed this university, and that state and central government officials have applauded and appreciated this work of the Sanstha.

The seminar was broadcast live on the university’s website and on the BAPS Sanstha’s Prerna Setu app. 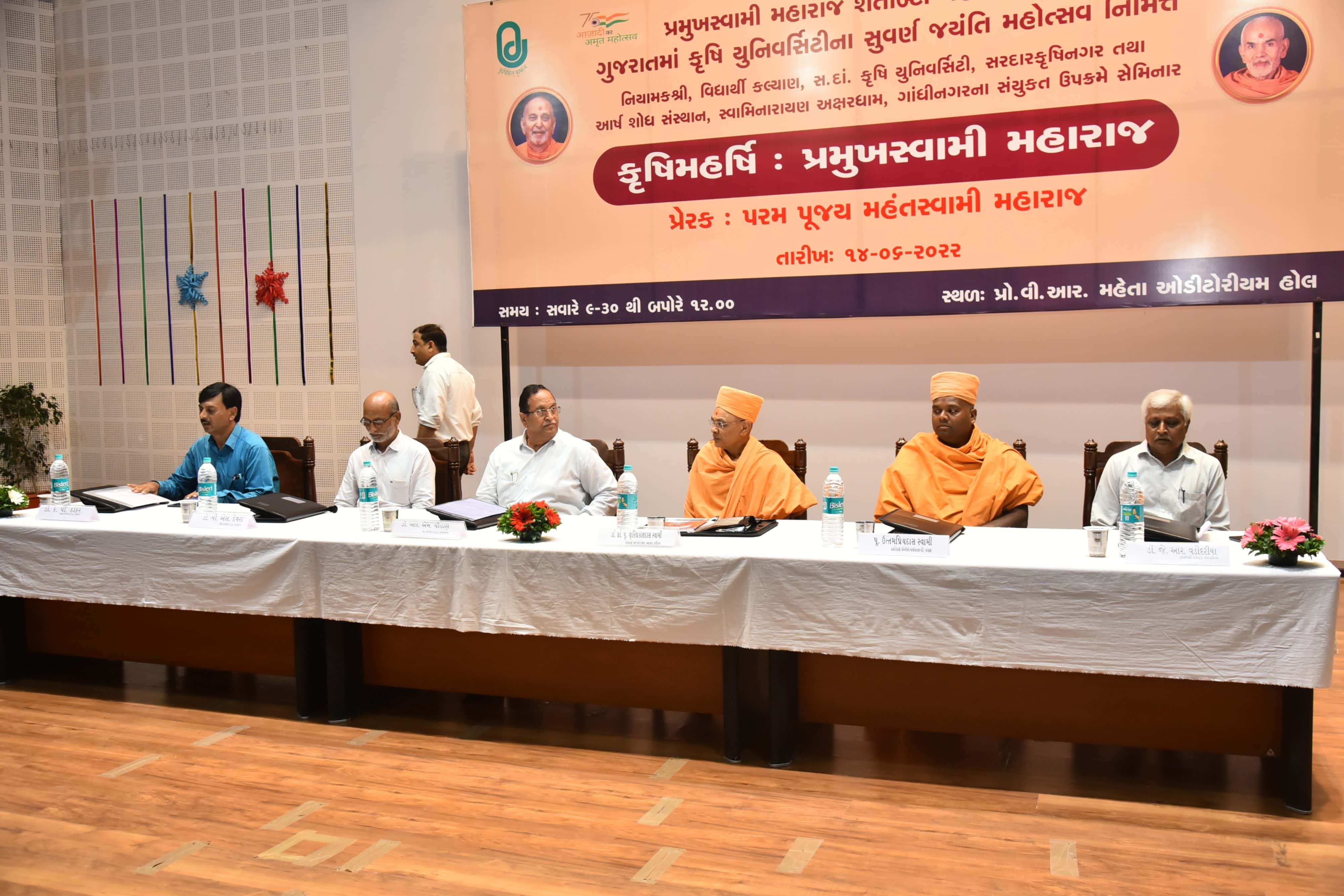 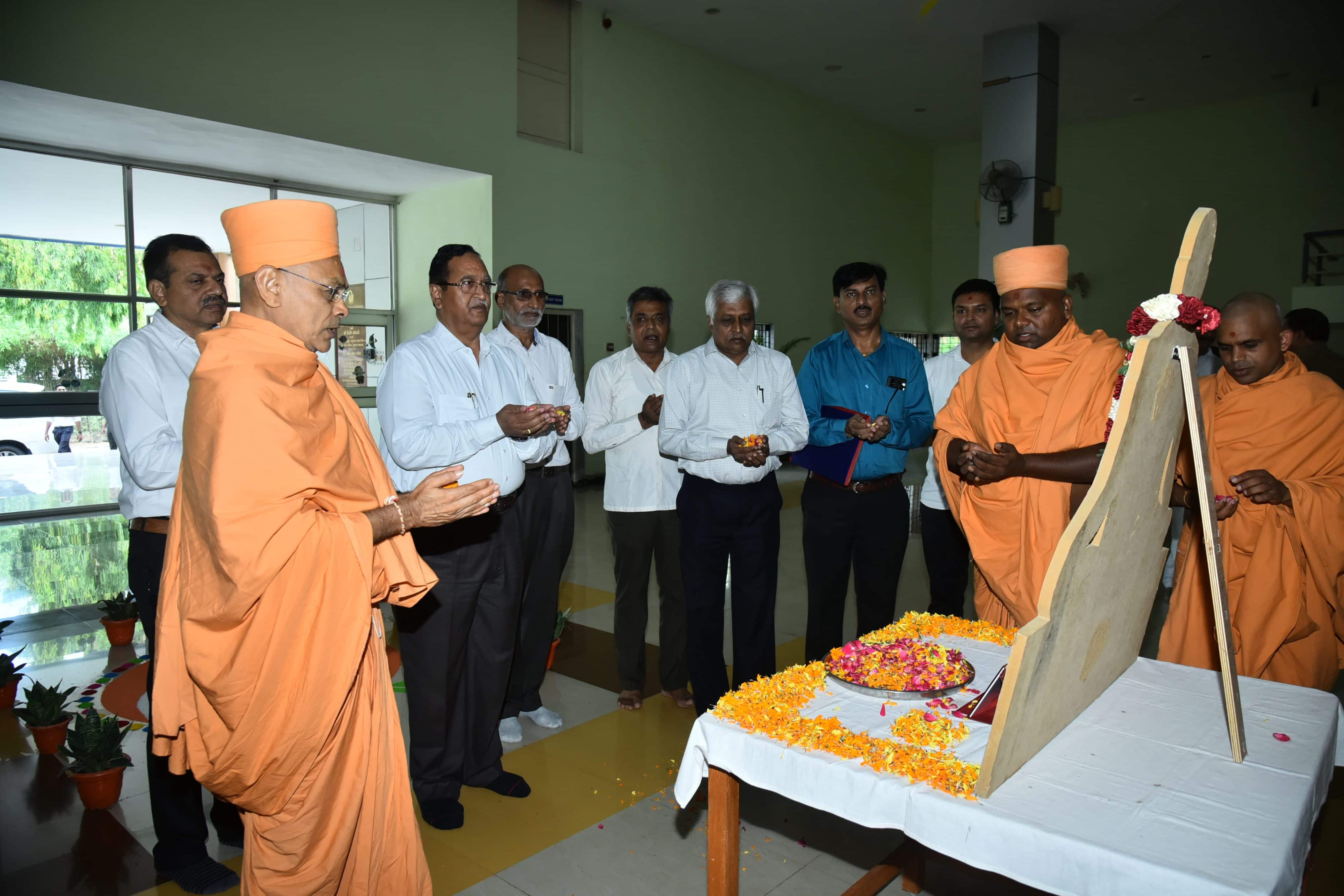 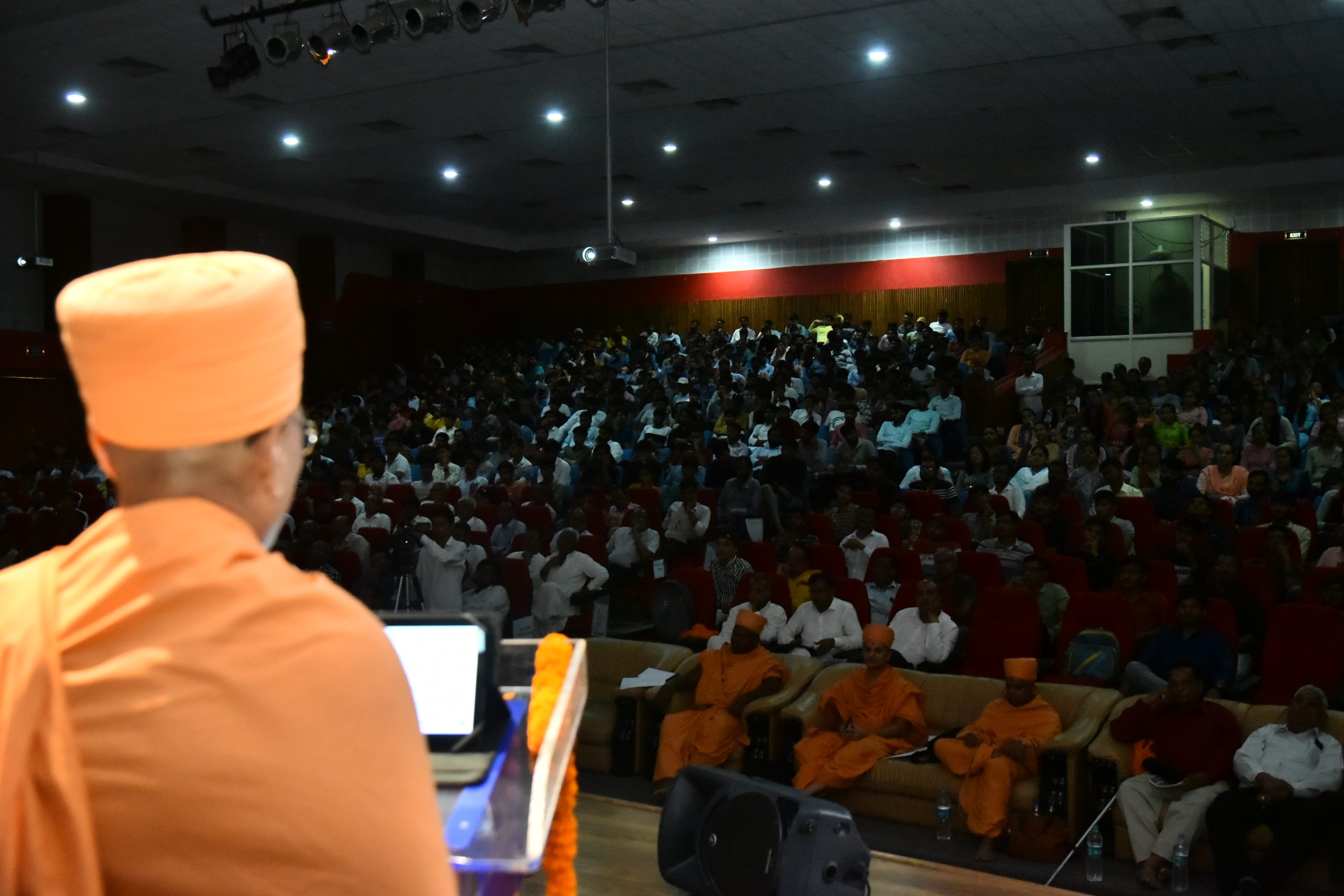 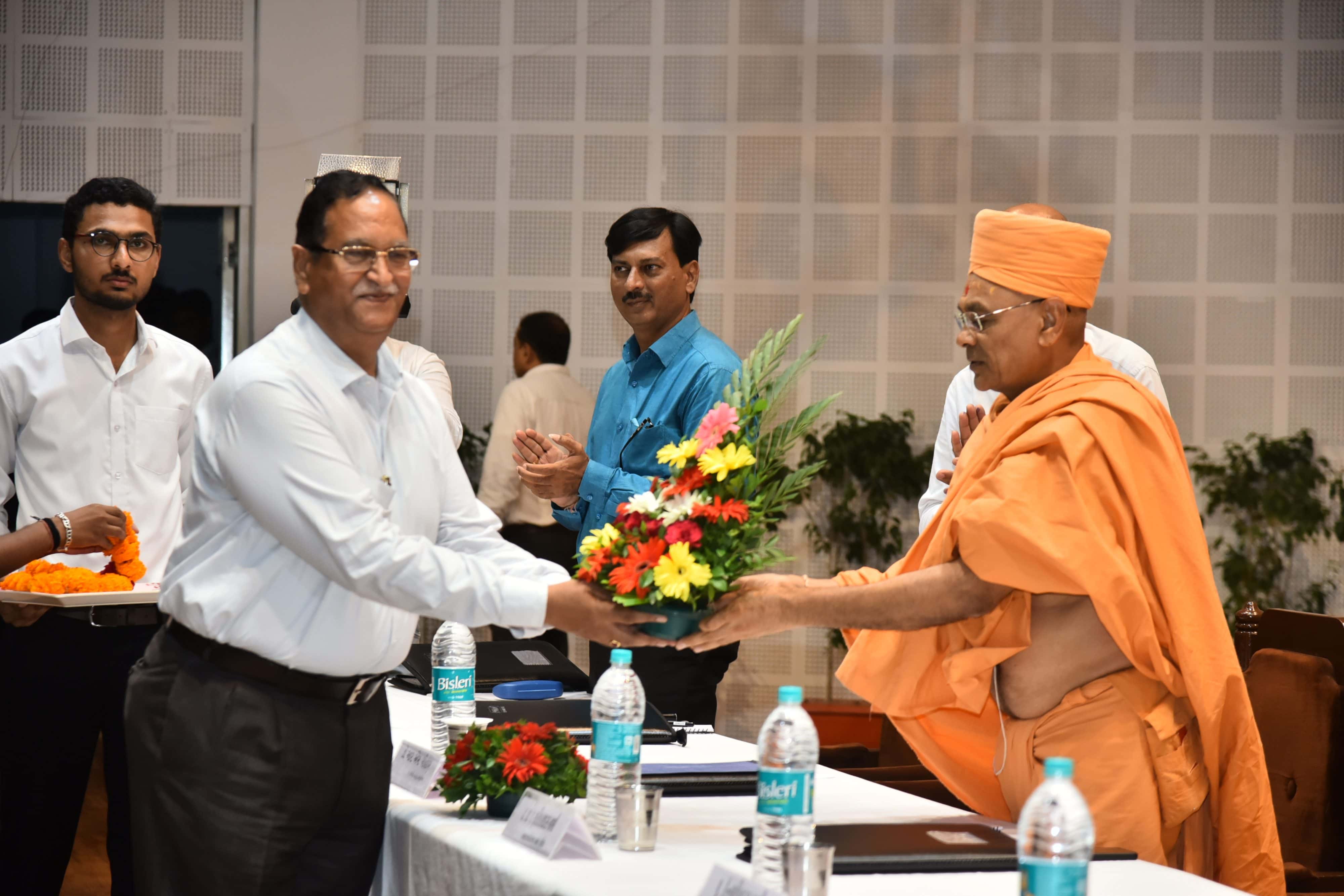 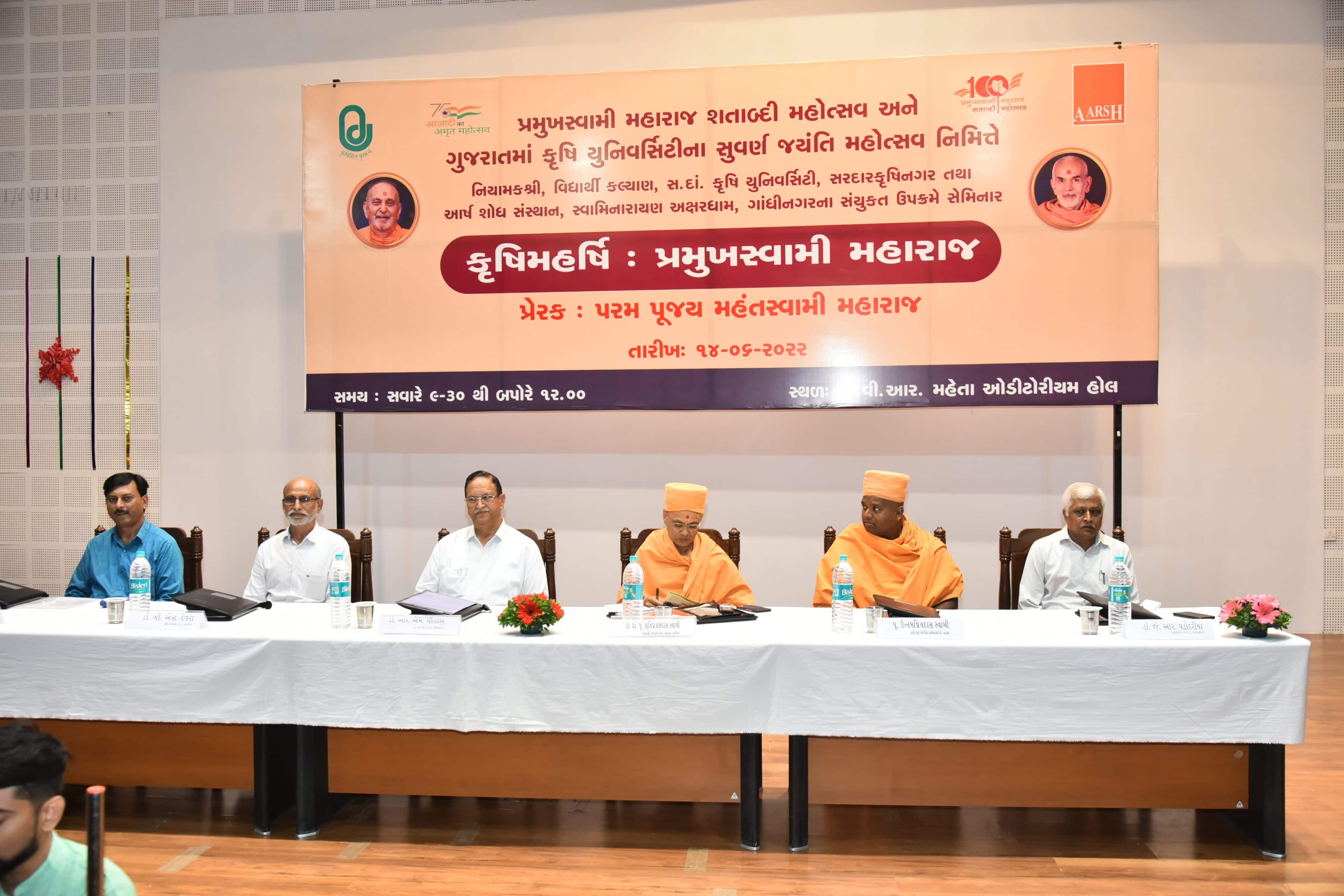