Recognition of the Svāminārāyaṇa-siddhāntasudhā by the Śrī Kāśī Vidvat Pariṣad at Swaminarayan Akshardham, New Delhi, India

After a chanting of Vedic mantras, Sadhu Munivatsaldas first paid tribute to Brahmasvarūpa Pramukh Swami Maharaj by recalling his selfless life and meaningful works for society. Eminent scholars were thereafter traditionally welcomed with garlands and shawls by Sadhu Bhadreshdas Swami, the head of the BAPS Swaminarayan Research Institute at Swaminarayan Akshardham in New Delhi. The Śrī Kāśī Vidvat Pariṣad then offered a special tribute to Brahmasvarūpa Pramukh Swami Maharaj and expressed their acclamations for the Svāminārāyaṇasiddhāntasudhā.

Thereafter, the vice-chancellor of Śrī Lal Bahadur Shastri Rashtriya Sanskrit University stated, “People misunderstand that the Svāminārāyaṇa tradition follows the Viśiṣṭādvaita doctrine. Bhadreshdas Swami has performed admirable work by authoring the first complete epistemological work on the Svāminārāyaṇa tradition. Adorned with Vedic references, pramāṇa mīmāṃsā, prameya mīmāṃsā and kārikās, this vādagrantha spans over 460 pages and is divided into 9 chapters. Reflecting the scholarly style of the ṣaḍdarśana texts and the literary style of Sanskrit, the vādagrantha will become the paramount of the Indian scholastic tradition.” He further emphasized, “Within the history of the Indian academic tradition: from the Vedas till the present day, it has been the first time that a single person has authored both a commentary on the entire Prasthānatrayī and also a vādagrantha of one’s own saṃpradāya. I firmly believe that this vādagrantha will achieve great admiration throughout the world.”

After Ācārya Śrī Ramnarayan Dwivediji read the letter of endorsement aloud, scholars of the Śrī Kāśī Vidvat Pariṣad presented it to Bhadreshdas Swami.

Then, Mahāmahopādyāya Ācārya Śrī Vashistha Tripathiji identified the Svāminārāyaṇasiddhāntasudhā as a unique contemporary work. He added, “Inspired by Brahmasvarūpa Pramukh Swami Maharaj, Bhadreshdas Swami framed the Akṣara-Puruṣottama siddhānta, as it was revealed by Bhagavān Svāminārāyaṇa, in the form of a commentary. By doing this, he substantiated the Svāminārāyaṇa saṃpradāya among scholarly circles. Without criticizing others, Bhadreshdas Swamiji has expressed the doctrine in a simple yet thoughtful manner that would appeal to ardent seekers of philosophy. For these reasons, the Svāminārāyaṇasiddhāntasudhā is undoubtedly a distinguished vādagrantha.”

Thereafter, Mahāmahopādyāya Ācārya Śrī Ramyatna Shuklaji, while recalling the recent acclamation of the Svāminārāyaṇasiddhāntasudhā in Kāśī, expressed, “As the president of the Śrī Kāśī Vidvat Pariṣad, I gathered all of the committee members. Every member was given a copy of the text. After reading the text, all of the members unanimously endorsed the vādagrantha and had nothing but praises for it.”

Heralding both the Svāminārāyaṇasiddhāntasudhā and the Svāminārāyaṇabhāṣya as exemplary of the scholarly śāstra tradition, Mahāmahopādyāya Ācārya Śrī Ramyatna Shuklaji commented, “I have carefully reviewed all of the texts written by Mahāmahopādyāya Bhadreshdas Swami. After studying these texts, it is evident that the texts are in accordance with Indian philosophy.” Then, by citing excerpts from the text, Mahāmahopādyāya Ācārya Śrī Ramyatna Shuklaji elaborated on the distinct definitions of ‘Akṣara and ‘Puruṣottama.’

Addressing the assembly, Bhadreshdas Swami expressed his immense gratitude to the scholars of Kāśī for being present to pay a special and unique tribute to Pramukh Swami Maharaj and for endorsing Parabrahman Svāminārāyaṇa’s Akṣara-Puruṣottama Darśana. He then humbly credited his scholarly works to the inspiration he had received from Guru Brahmasvarūpa Pramukh Swami Maharaj and the blessings of Guru Param Pūjya Mahant Swami Maharaj. 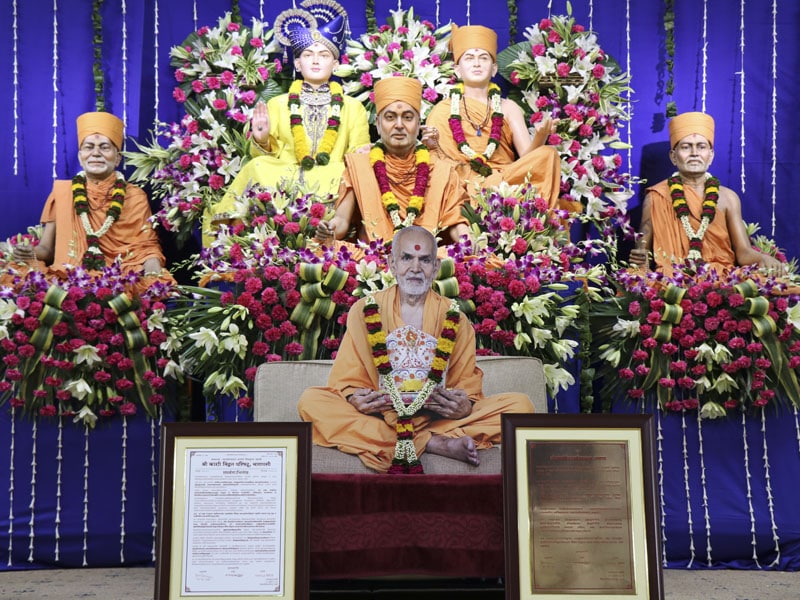 Sadhu Bhadreshdas Swami at the assembly 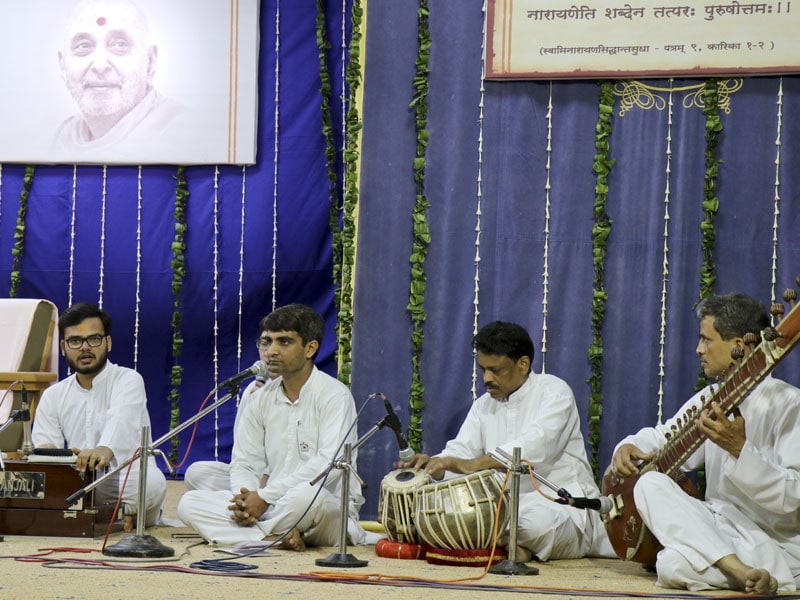 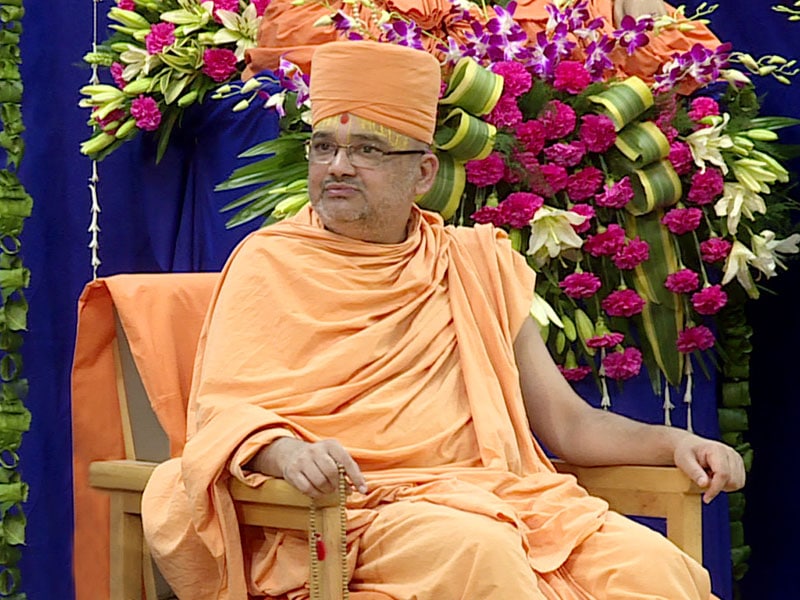 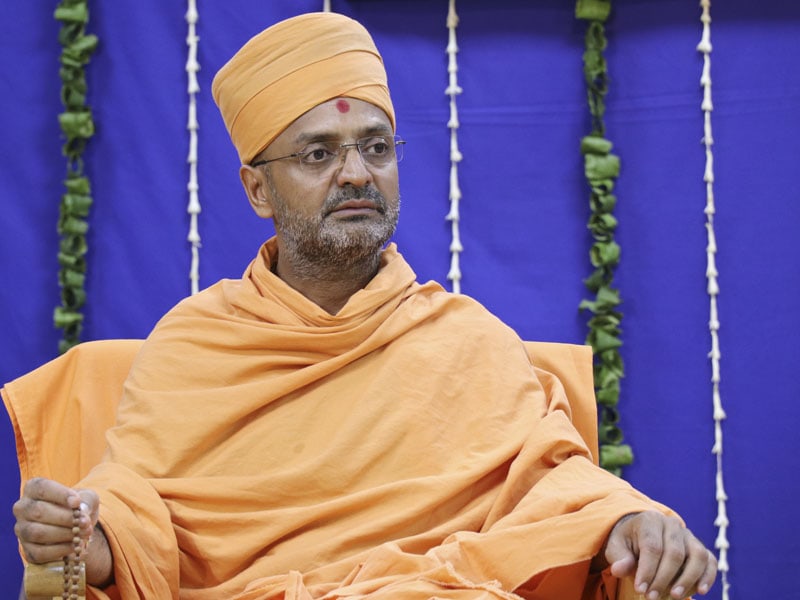 Sadhu Munivatsaldas Swami, Head of Swaminarayan Akshardham in New Delhi, at the assembly 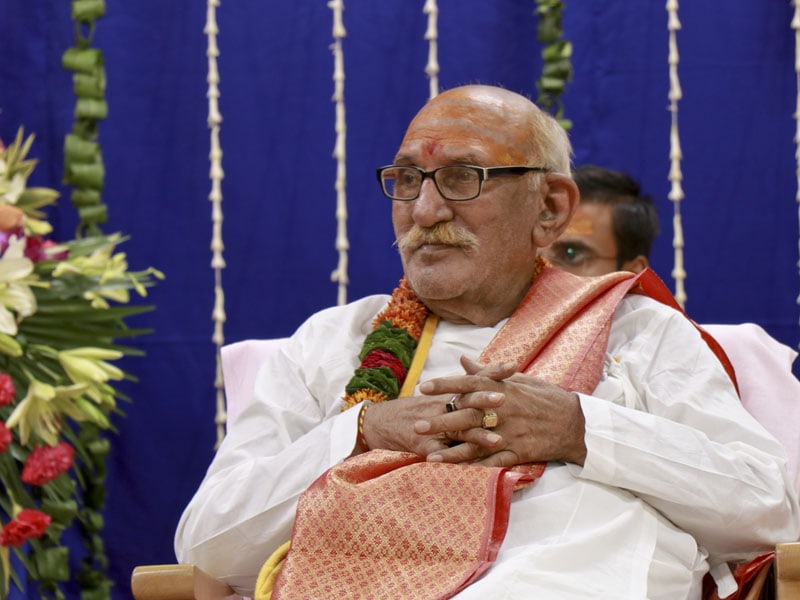 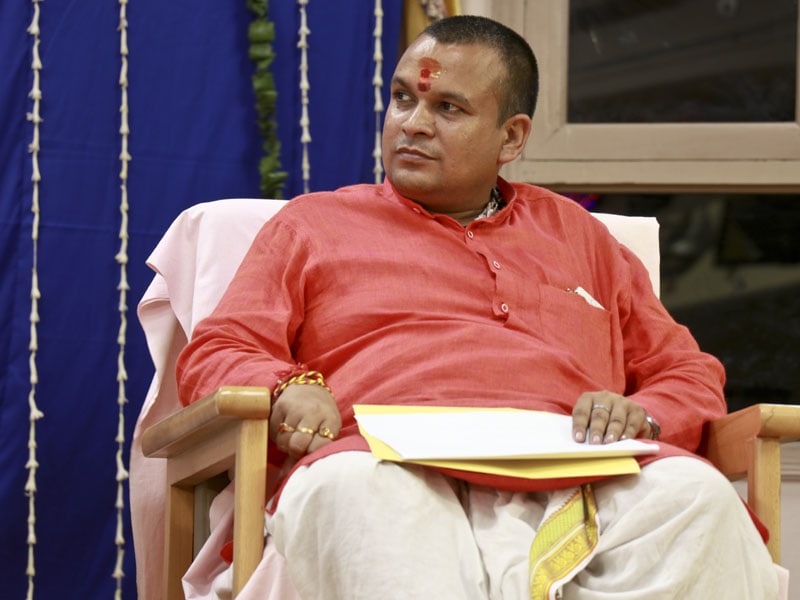