The new BAPS Swaminarayan Research Institute at Swaminarayan Akshardham, New Delhi, was inaugurated by Pramukh Swami Maharaj on Sunday, 4 July 2010 in the presence of leading scholars of philosophy from Delhi, Uttar Pradesh, Maharashtra, Gujarat, Madhya Pradesh, Andhra Pradesh and Tamil Nadu. A one-day seminar was held to mark the occasion.

During Swamishri’s morning puja in the mandir assembly hall he lit the auspicious divo to begin the first session of the inauguration seminar.

Then, Viveksagardas Swami spoke on Bhagwan Swaminarayan, the guru parampara and the Akshar-Purushottam philosophy. Chief guests of the first session were Padmabhushan Pandit Satyavrat Shastri and Shri Prakash Dubeyji, President of the All India Philosophy Convention. Both addressed the gathering, praising the recently written Brahmasutra Swaminarayan Bhashyam by Bhadreshdas Swami.
At 10.00 a.m., the scholars joined Ishwarcharandas Swami and Viveksagardas Swami outside the BAPS Swaminarayan Research Institute for the formal inauguration. Sadhus recited mantras from the four Vedas as pujan of Shri Harikrishna Maharaj was performed and the nadachhadi untied. All then entered the Institute’s conference hall for the second session of the seminar, from 10.30 a.m. to 1.00 p.m., in which the delegates discussed the various types of research work that should be undertaken by research institutes, focusing especially on how to promote moral values.

The third session was held in the Institute’s conference hall from 2.30 to 5.00 p.m., in which the discussion centred on ‘Brahmasutra Bhashya – Contributions of Traditions’.

Prof. S.P. Dubey briefly described the 14 bhashyas (commentaries) on the Brahmasutras from the time of Shankaracharya to the present and hailed Bhadreshdas Swami’s ‘Shri Swaminarayan Bhashyam’ as the fifteenth.

Scholars of the many sampradayas present also expressed their praise for the excellent and lucid Swaminarayan Bhashya. They all said that such a masterpiece was the result of the grace and blessings of guru Pramukh Swami Maharaj upon Bhadreshdas Swami.

The final session was held from 5.30 p.m. in the mandir assembly hall in the presence of Pramukh Swami Maharaj during the Sunday sabha.

“Until true knowledge is attained progress is not possible. Our shastras reveal that the body is perishable and temporary, and that atma-Paramatma are eternal. Such knowledge is gained from a true Sadhu, who has knowledge of the form of God. That knowledge is of Atma and Paramatma, Brahman and Parabrahman and it leads to moksha. The qualities of a true sadhu are described in the Gita: one who enjoys the brahmic state and has no attachments. Yogiji Maharaj was such a sadhu. He always said, ‘May God do good of all. Worship God.’ The shastras instruct us to go to such sadhus. Bhagwan Swaminarayan also said that the four Vedas, shat-shastras, 18 Purans, Mahabharat and other shastras reveal that moksha is attained only through the company of God or his Sadhu.
“The bhashya by Bradreshdas Swami is based an Shastriji Maharaj’s wish that texts be written on the Akshar-Purushottam philosophy. By God’s grace he has accomplished the task well. May all be blessed with moksha.”
Thus, the inauguration of the new BAPS Swaminarayan Research Institute was concluded.

By reading this commentary we will come to the conclusion that Swaminarayana tradition is an independent one on Akshara Purushottama Siddhanta based on Vedic tradition which is quiet ancient. It is quite different one and has its own specialty. It greatly differs from Ramanuja’s Visisthadvaita, Vallabhadevas Suddhadvaita and the philosophy of Madhva, Nimbarka etc. It brings out greatly the special features and principles of the Siddhanta very effectively… in accordance to the eternal Vedic principles conveyed by Bhagavan Sri Swaminarayana and enlightened the Guruparampara.

This new interpretation opens our eyes to a new horizon in this field of knowledge, in an objective manner. This is another jewel… placed in the ornament of Bashyas to the Brahmasutra which ornaments the neck of mother Upanishad. 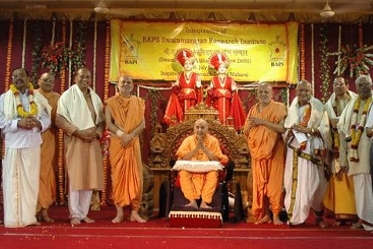