The Rashtriya Sanskrit Vidyapith (1961) was ordained as the National Sanskrit University on 30 April 2020. Since then, the university has been recognized as one of the foremost educational institutions in India and has been accredited with an A++ grade by the National Assessment and Accreditation Council (NAAC).

Mahamahopadhyaya Bhadreshdas Swami was invited as the chief guest to deliver the first convocation address and he was also felicitated for his outstanding contributions to Sanskrit literature and Darshanic thought.

Accompanied by traditional South Indian music and Vedic recitations, the festivities commenced with a grand procession to the Mahati Auditorium involving invited dignitaries, scholars, and university faculty and administrators.

Thereafter, the Vice-Chancellor of the University, Prof. Muralidhara Sharma welcomed Bhadreshdas Swami, distinguished guests, faculty members, graduating students, and their well-wishers to this momentous occasion. In addition to revealing the historic significance of the event, the Vice-Chancellor highlighted many of the distinguished accomplishments of the University and its proactive commitment towards not just the preservation but also proliferation and application of Vedic teachings and values.

After the welcome addresses, 650 graduating students were presented their degrees and awards by the chief guest Mahamahopadhyaya Bhadreshdas Swami and the Honorable Chancellor Sri N. Gopalaswami.

Thereafter, Bhadreshdas Swami and the Hon. Chancellor released books published by the university.

Mahamahopadhyaya Bhadreshdas Swami then addressed the convocation assembly. He mentioned that today is Shard Purnima, the birthday of Aksharbrahma Gunatitanand Swami Maharaj, the first spiritual successor of Parabrahma Swaminarayan in the Swaminarayan Sampradaya. He also described how Pramukh Swami Maharaj inspired him to learn the Sanskrit language and Hindu shastras. He elaborated on the glory of India as the birthplace of numerous philosophies, such as, Sankhya, Yoga, Nyaya and Vedanta, the country’s contribution to the betterment of society through its education system.

He offered a heartfelt prayer for all the graduates to Parabrahma Swaminarayan, Aksharabrahma Gunatitanand Swami, and Guruhari Mahant Swami Maharaj, “May the flow of learning please our hearts, purify our minds, enlighten our intellects, and extend the immense glory of wisdom.”

In his presidential address, Chancellor Shri N. Gopalaswami congratulated the graduating students for their exceptional achievements and expressed his deep regard for Bhadreshdas Swami’s outstanding literary and philosophical contributions, “Swamiji is a pioneer in Indian philosophy and a recognized scholar of the Sanskrit language and its timeless literature. He has authored a comprehensive Sanskrit commentary of the Prasthanatrayi according to the Darshanic teachings of the Swaminarayan Sampradaya.”

He recalled Bhadhreshdas Swami’s visit to Tirupati in February 2021 and the great philosophical discussions with scholars of the university.

Chancellor Shri N. Gopalaswami added, “Our university has a great opportunity to work with the BAPS Swaminarayan Research Institute. I am confident that with their guidance, the collaboration with the institution, and the guidance of our vice-chancellor, we will be able to make tremendous progress. I wish to emphasize that it is the need of the times… Such initiatives are vital for ensuring an authentic understanding of our values, culture, and achievements.”

After offering encouraging words to the students, the chancellor felicitated Bhadresdas Swami and the distinguished guests.

The first Convocation Ceremony of the National Sanskrit University concluded with the national anthem. 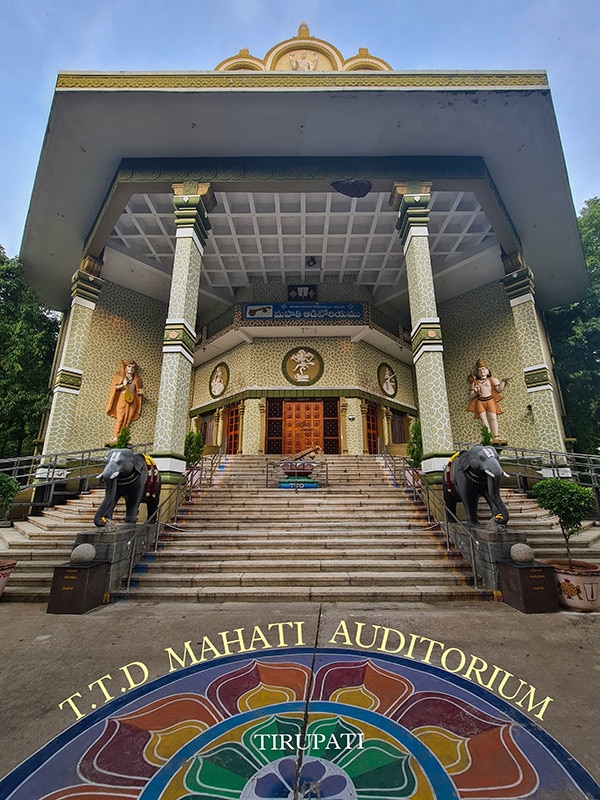 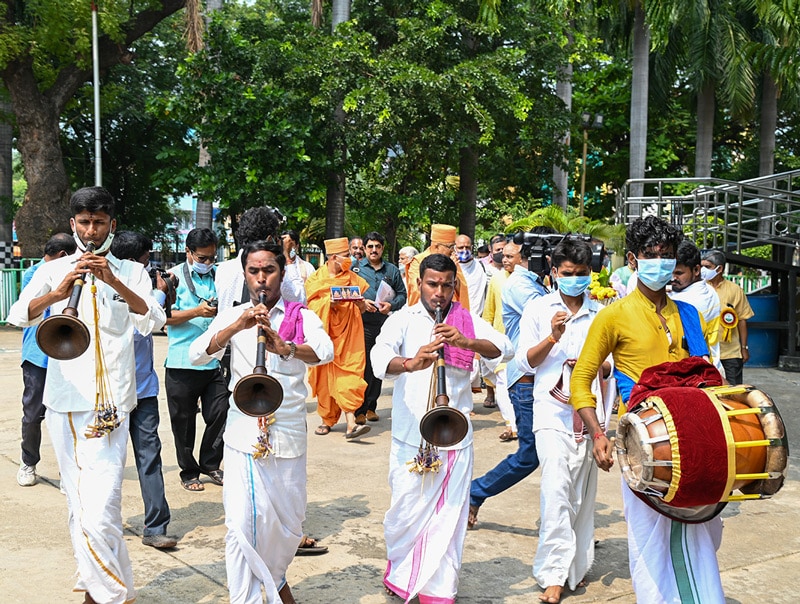 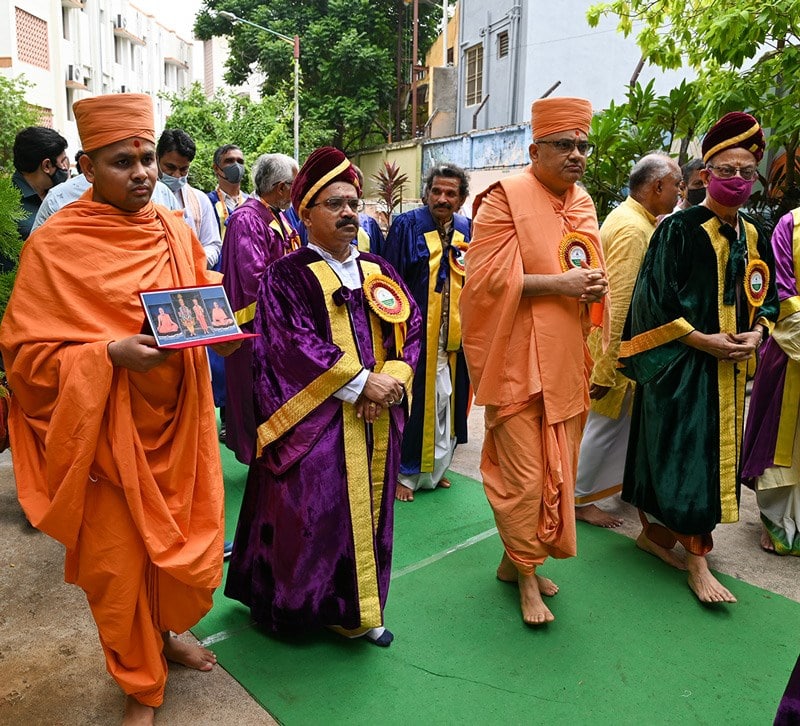 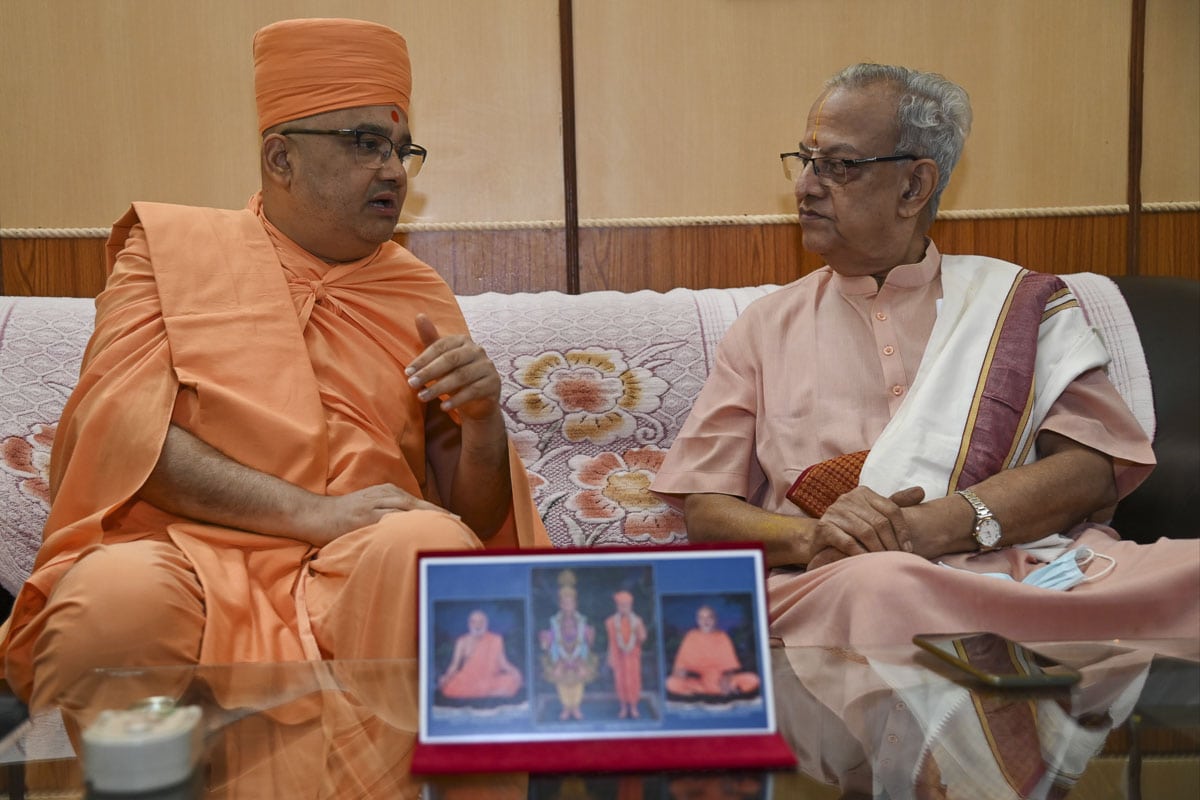 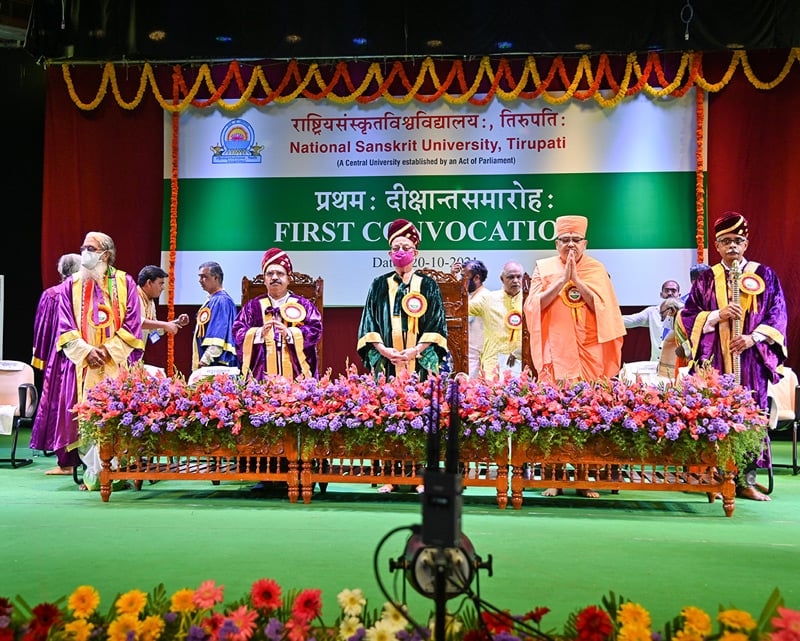 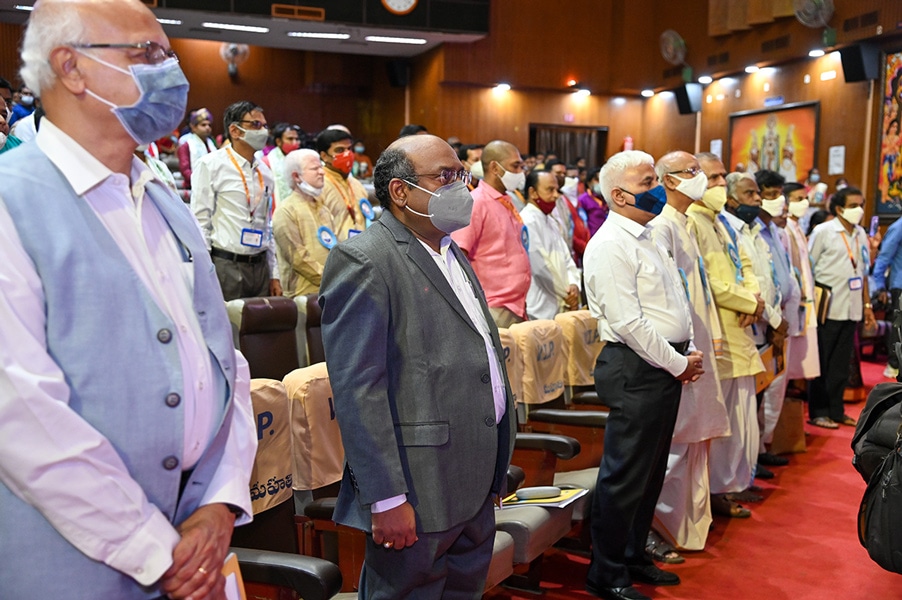 The audience welcomes the stage dignitaries 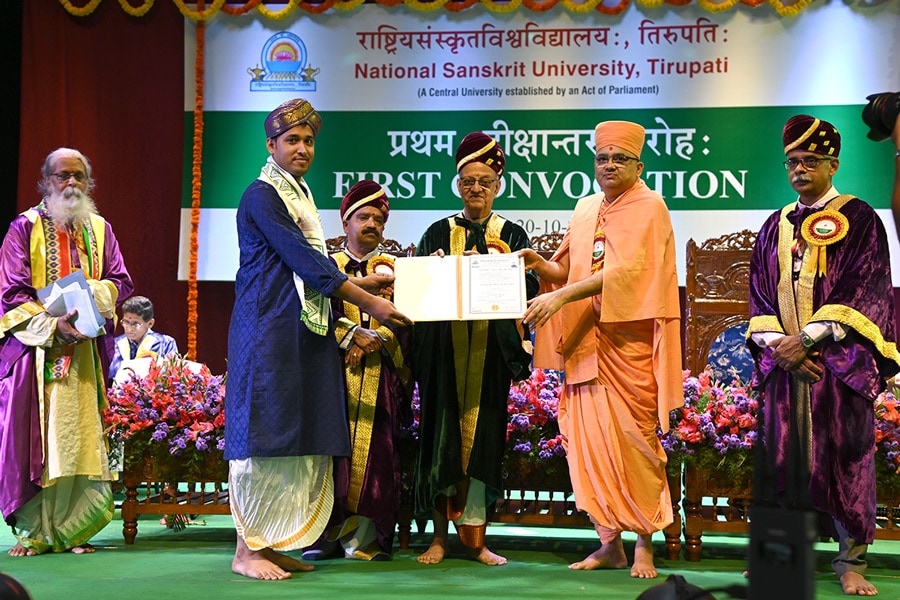 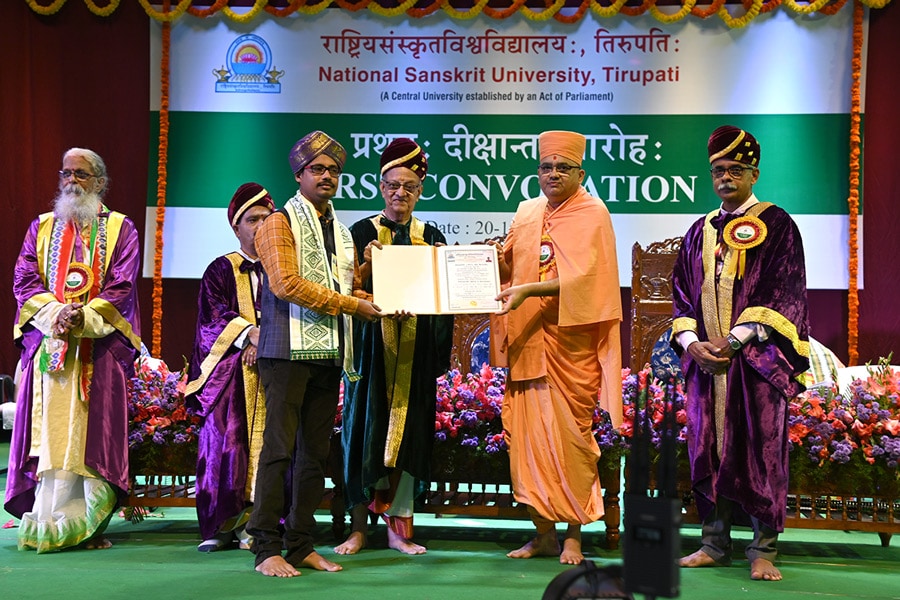 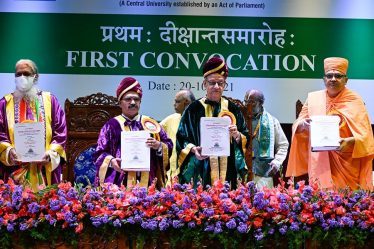 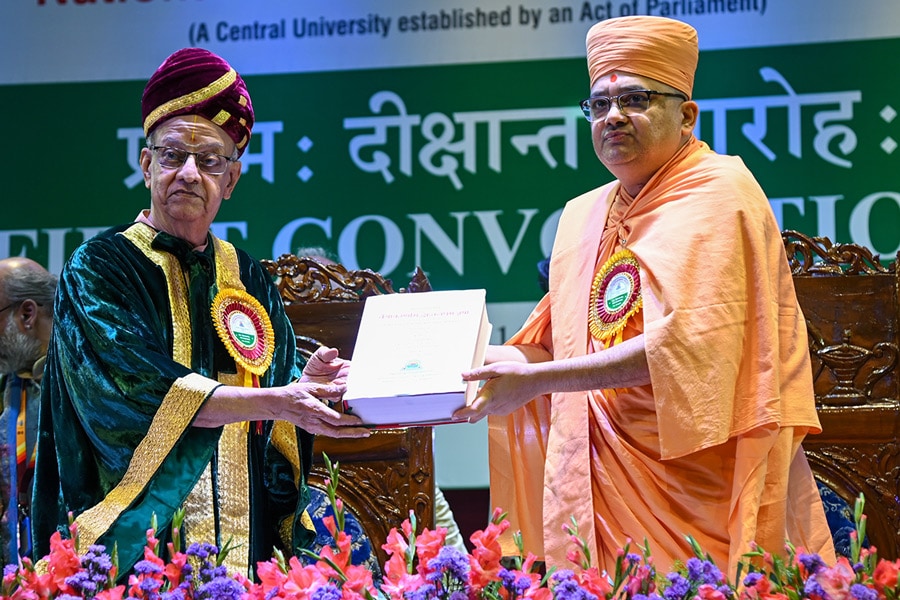 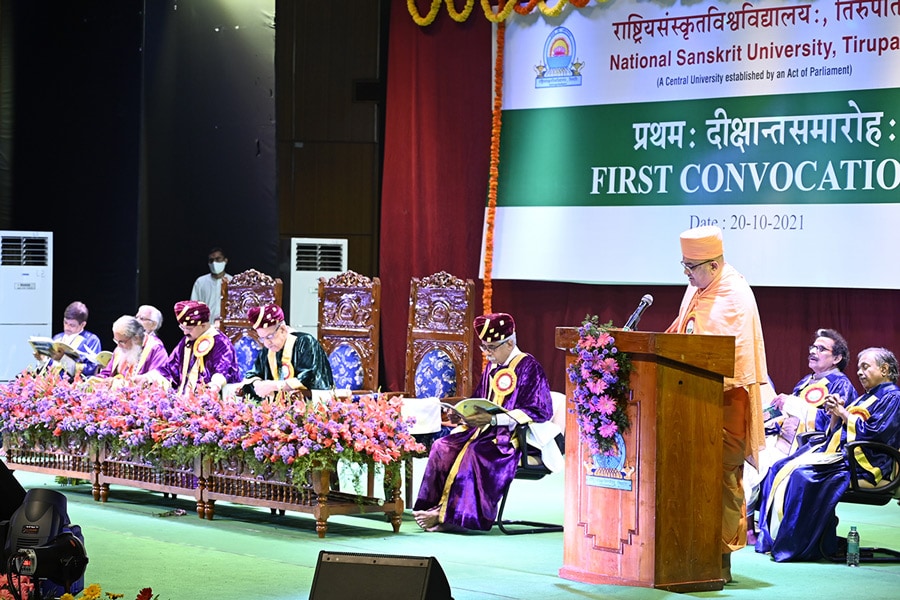 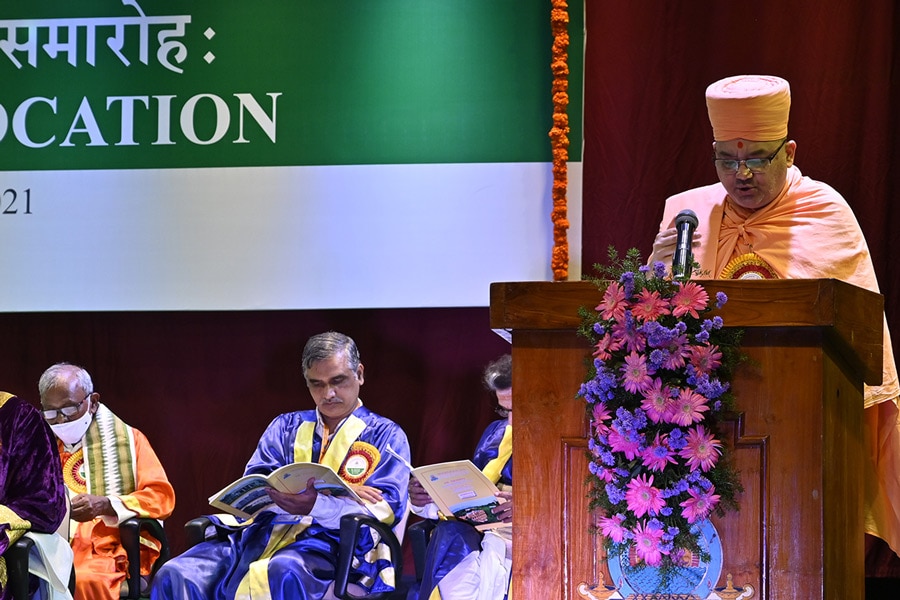 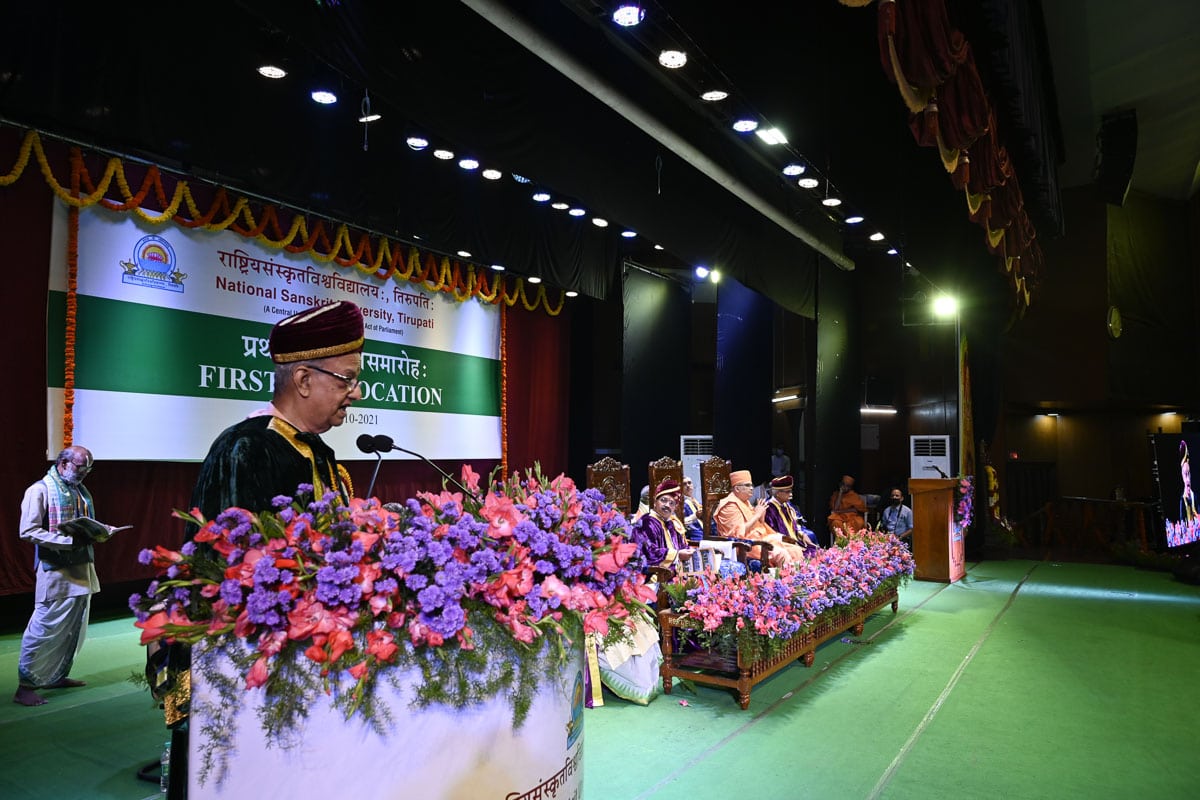 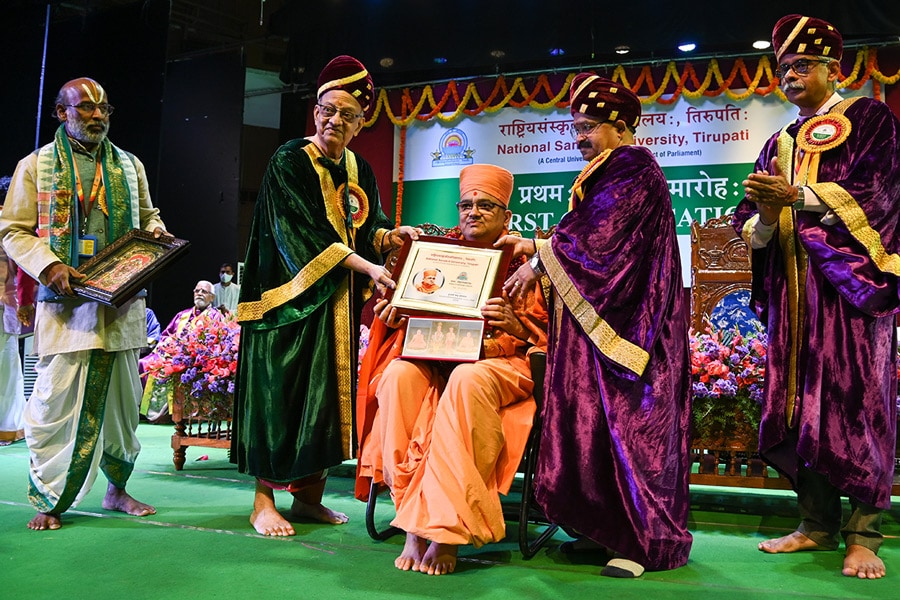 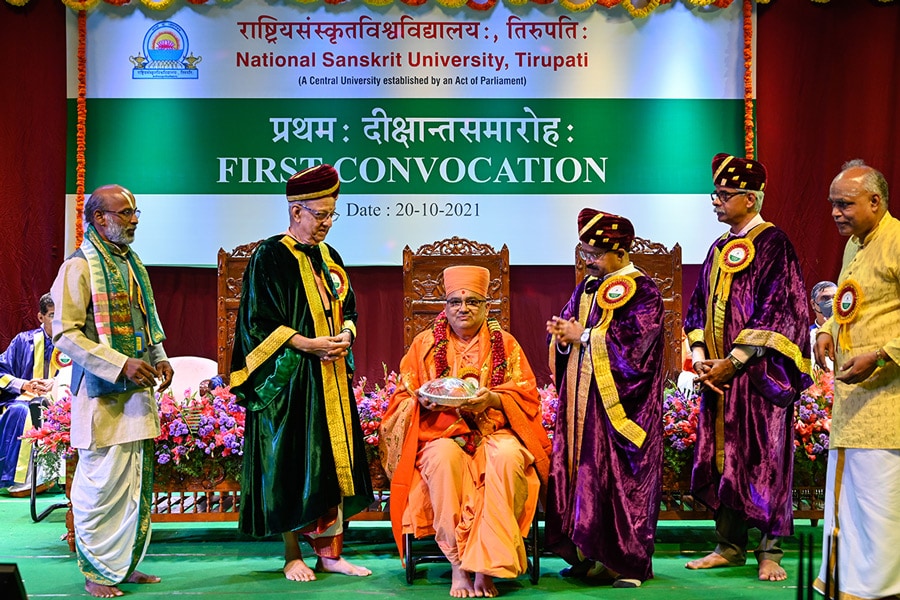