Acclaimed Scholars Participate in ‘The Akṣara-Puruṣottama Darśana in Dialogue with Other Darśanas’ Conference, New Delhi, India

Under the benefaction of The Indian Council of Philosophical Research (ICPR), the BAPS Swaminarayan Research Institute conducted a three-day conference (15 -17 Nov. 2019) titled: ‘The Akṣara-Puruṣottama Darśana in Dialogue with Other Darśanas’. Scholars at the conference presented in-depth research on the Akṣara-Puruṣottama Darśana from their unique disciplinary perspectives and also engaged in productive reflections and discussions on the topics presented.

The inaugural session of the three-day conference commenced with a recitation of prayers from the Vedas and a ceremonial lighting of the dīpa. Munivatsaldas Swami, Koṭhārī of Swaminarayan Akshardham, welcomed all the delegates to the conference.

“In the world it is believed that there are no novel contributions to be made in darśanic studies and that discussions continue on age-worn ideas. In other words, many claim that discussions are only conducted on outdated philosophies and that it is impossible for new philosophies to be born. However, when we listen to the principles of the Akṣara-Puruṣottama Darśana and read its commentarial works, we realize that an altogether distinct philosophical system is introduced. It serves as a prime example to demonstrate that original streams of Indian thought have not ceased to flow. The Akṣara-Puruṣottama Darśana is an original darśanic system and this conference is organized to highlight many of its distinctive features. This darśana possesses all of the requirements necessary to engage in dialogue with other darśanic systems. Mahāmahopādhyāya Bhadreshdas Swamiji has presented the principles of this darśana in the form of a commentary on sacred texts. I consider myself fortunate to have the opportunity to present on this new darśana.”

In his address, Śrī Rameśacaṃdra Sinhājī, president of the ICPR, then shared the nature of his close relationship with the Svāminārāyaṇa Saṃsthā and recalled his heartfelt meeting with Pramukh Swami Maharaj at the BAPS mandir in Sarangpur. He also acclaimed Bhadreshdas Swami as an abhinava bhāṣyakāra (a modern commentator). He thereafter applauded the Svāminārāyaṇa Saṃpradāya’s beneficence and dedication towards social service.

“The tradition of providing extensive expositions on aphorisms and authoring insightful commentaries extends back thousands of years. Prior to authoring his commentary, Bhadreshdas Swamiji studied various sacred texts and became well-acquainted with the intricacies of darśanic reflection… Bhadreshdas Swami authored the commentary to benefit all… I have read through his entire commentary. There is not a single letter that contradicts the śrutis. His effort is incomparable… The Akṣara-Puruṣottama Darśana is rooted in the Vedas… The purity of the sadhus we find here is unparalleled.”

Thereafter, Śrī S.R. Bhaṭṭajī stated, “At this moment, I congratulate Bhadreshdas Swami, who has offered us great advice. Swamiji’s commentary is a testament to the living darśanic tradition.”

At the conclusion of the inaugural session, Bhadreshdas Swami summarized the goals of the conference in his keynote address:

“It is natural to engage in dialogue. However, only discussions that are free of obstinance and malice give birth to a darśana. As the source of new darśanic systems, our ancient sacred texts, such as the Upaniṣads and the Gītā, serve as examples of such constructive dialogues. Bhagavān Svāminārāyaṇa’s Vacanāmṛta is also a prime example of such a discussion. The dialogues recorded in the Vacanāmṛta have given birth to a unique darśana, which is identified as the ‘Akṣara-Puruṣottama Darśana.’”

A Diverse Presentation of Topics

Throughout the conference, scholars presented their research on the distinctive features of the Akṣara-Puruṣottama Darśana in context to the other darśanic systems. The topics covered included: the distinct metaphysical aspects of the darśana, its unique understanding of epistemology, the creation narrative of the darśana, exposition on its characteristic understanding of liberation, the darśana’s unique reading of Upaniṣadic revelations and its distinctive reading of the Brahmasūtra aphorism: ‘athāto brahmajijñāsā’. Scholars also contrasted the darśana’s philosophical positions with that of the Sāṅkhya Darśana, demonstrated the Akṣara-Puruṣottama Darśana as distinct from the Advaita, Viśiṣṭādvaita, and other Vedānta darśanas, and analyzed the literary features of the Akṣara-Puruṣottama Darśana’s commentarial texts and its vāda-text according to methods of Sanskrit sāhitya. In addition, scholars presented their analysis of these works from a Sanskrit grammatical perspective, contrasted its exposition with those from the Nyāya Darśana and highlighted how the Svāminārāyaṇabhāṣya’s elaborations were founded on expositions offered by Svāminārāyaṇa in the Vacanāmṛta. All these presentations clarified many of the distinct features of the Akṣara-Puruṣottama Darśana and gave new insights into its principles, through which delegates developed a deep appreciation for its unique contributions to darśanic thought.

During their visit to the Swaminarayan Akshardham monument and exhibitions, all attendees experienced a rejuvenated admiration for Indian culture and civilization. Prof. Haridāsa Bhaṭṭa, a renowned pundit of the Mādhva Saṃpradāya, remarked, “One experiences all Indian darśanas and culture here. Its presentation is extremely captivating. Here, there is harmony between purity, devotion, renunciation and artful expression. When I went to sleep at night, I could only see Akshardham.”

Dr. Śrī Jyotīndra Dave gave the vote of thanks in the conference’s concluding session.

“By paying close attention to the various research presented and engaging in the question-answer sessions that followed, a jñānayajña has been completed. Moreover, it is momentous to be able to engage in such mutual reflection in the presence of the commentator himself. This has never occurred before. We may participate in discussions on the commentaries authored by our revered ācāryas—Śaṅkara, Rāmānuja, Madhva, and others—however, not in the presence of the bhāṣyakāras (commentator) themselves. Today, the bhāṣyakāra sits here before us, while we engage in discussion; for this reason, our discussions become exceptionally authoritative… I certainly believe that the future will bear witness to innumerable texts that are authored on the Akṣara-Puruṣottama Darśana… Truly, throughout this conference, I have encountered the austerity and divinity one experiences in the forest.”

“Over the last three days, we have achieved great clarity from the in-depth discussions and reflections on the principles of the Akṣara-Puruṣottama Darśana. However, one attains realization of the darśana’s principles only by the grace of the guru. Pramukh Swami Maharaj was such a guru; today, Mahant Swami Maharaj is this guru. The Svāminārāyaṇabhāṣya is not a literary work, but the fruits of the guru’s blessings.”

“The conference afforded me with the rare opportunity to meet with renowned scholars.”

“I have participated in over 150 conferences. Among them, this conference appears to me to be the best. Here, everyone was provided with ample time to present their work… New perspectives were also attained. I experienced extraordinary spiritual bliss.”

“The disciplined manner in which research was presented here is not seen elsewhere.”

“The study and reflection of this darśana is performed in the traditional way; its center is located within Sarangpur. I desire to have its darśana.”

“This conference is like the famous churning of the ocean (samudra-manthana); from it arise innumerable priceless thoughts.” 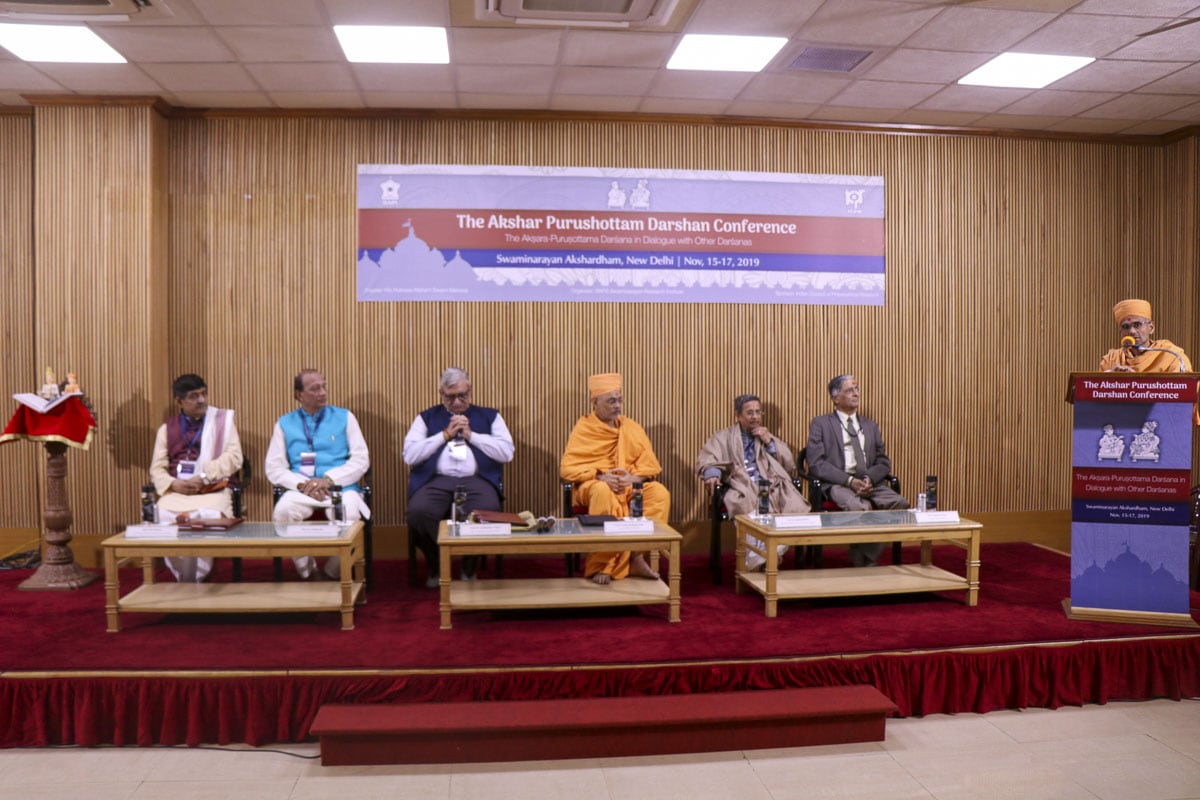 Senior scholars during the valedictory session 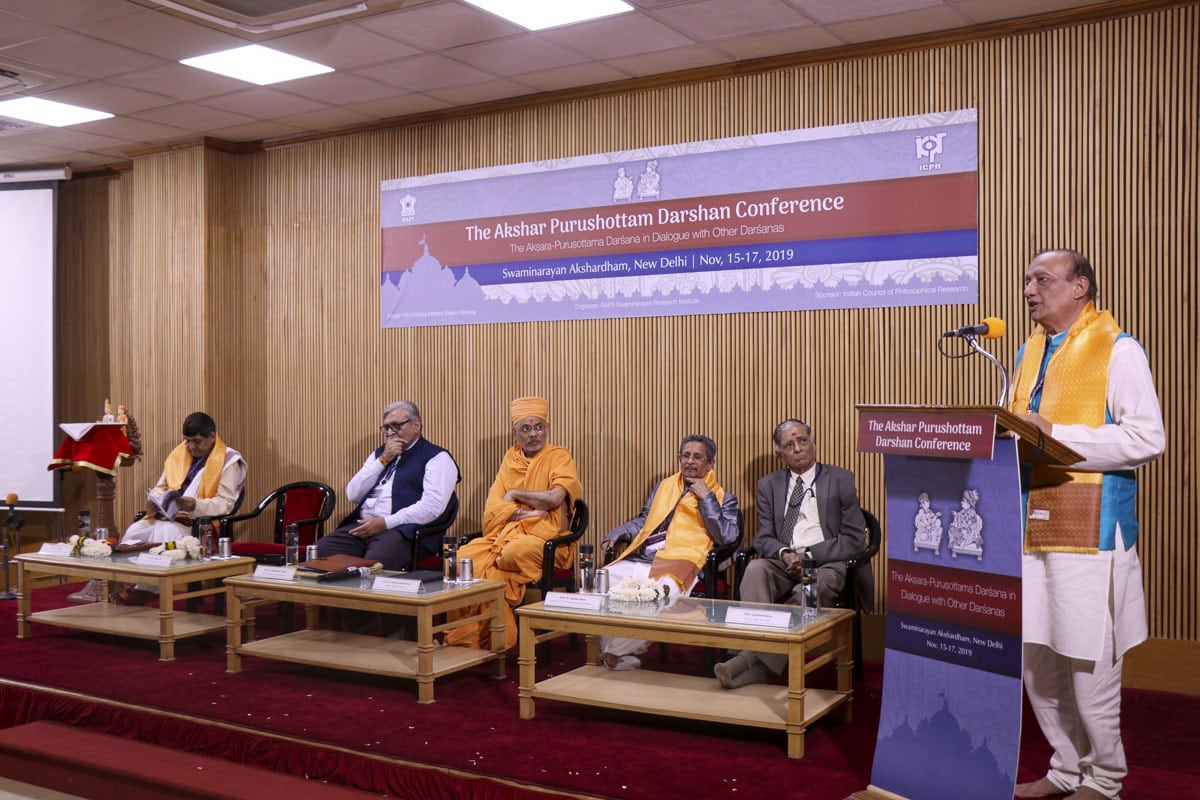 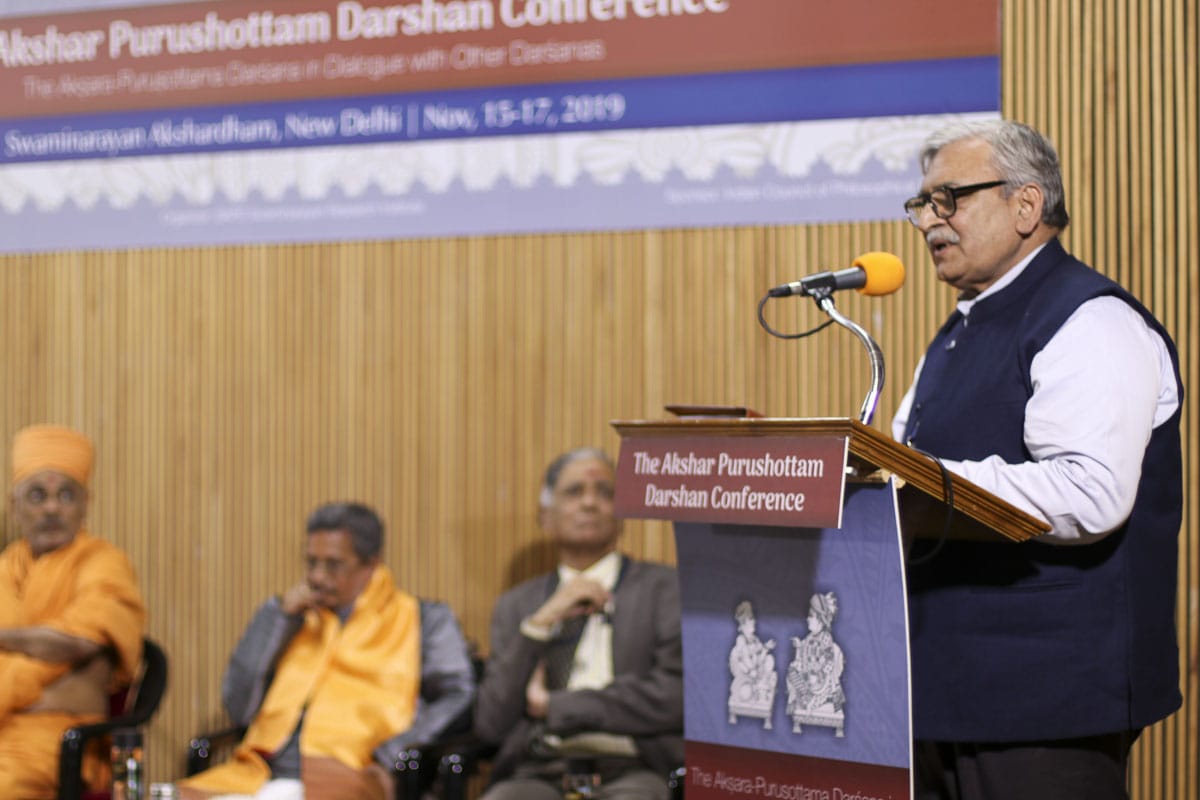 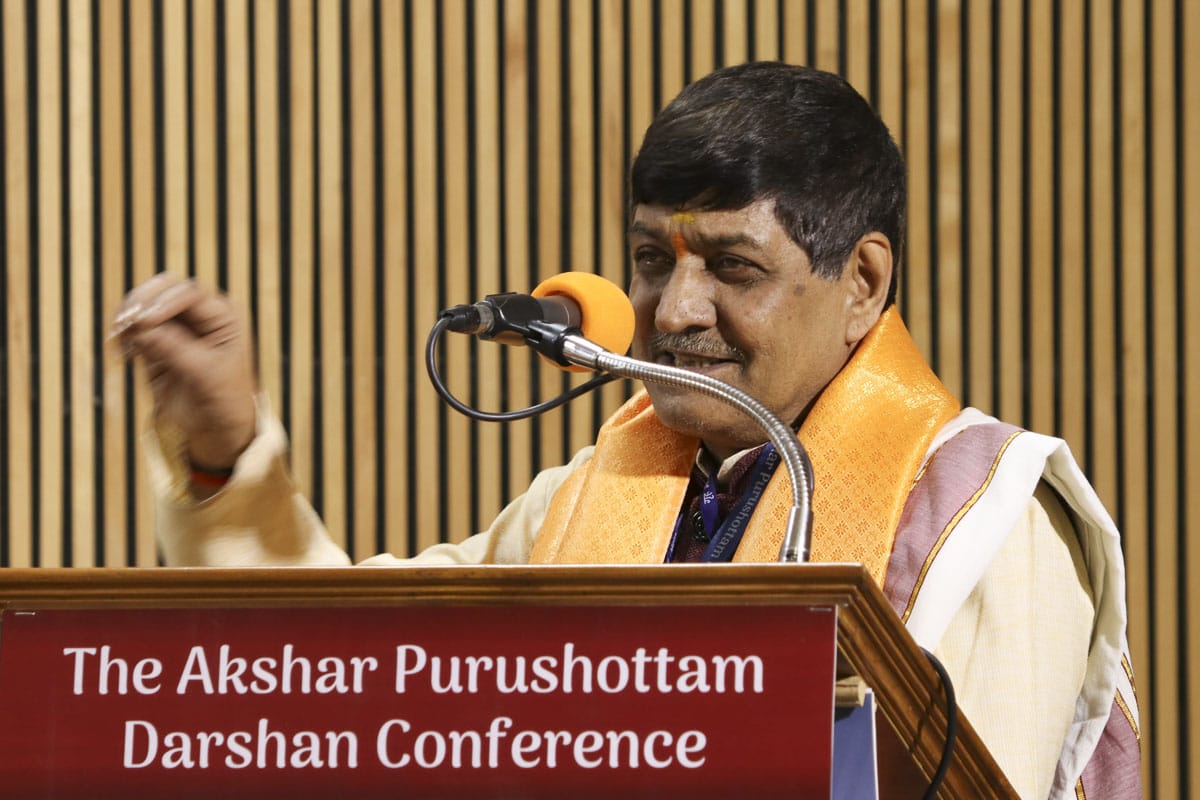 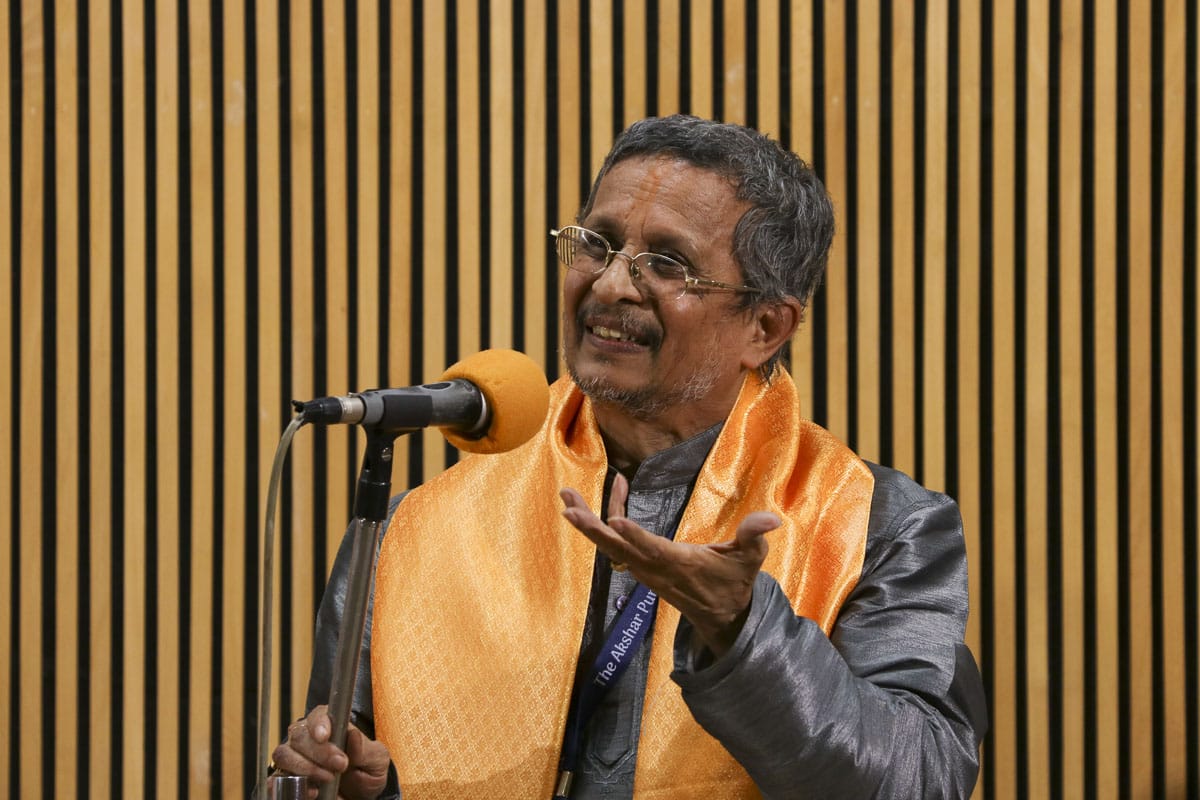 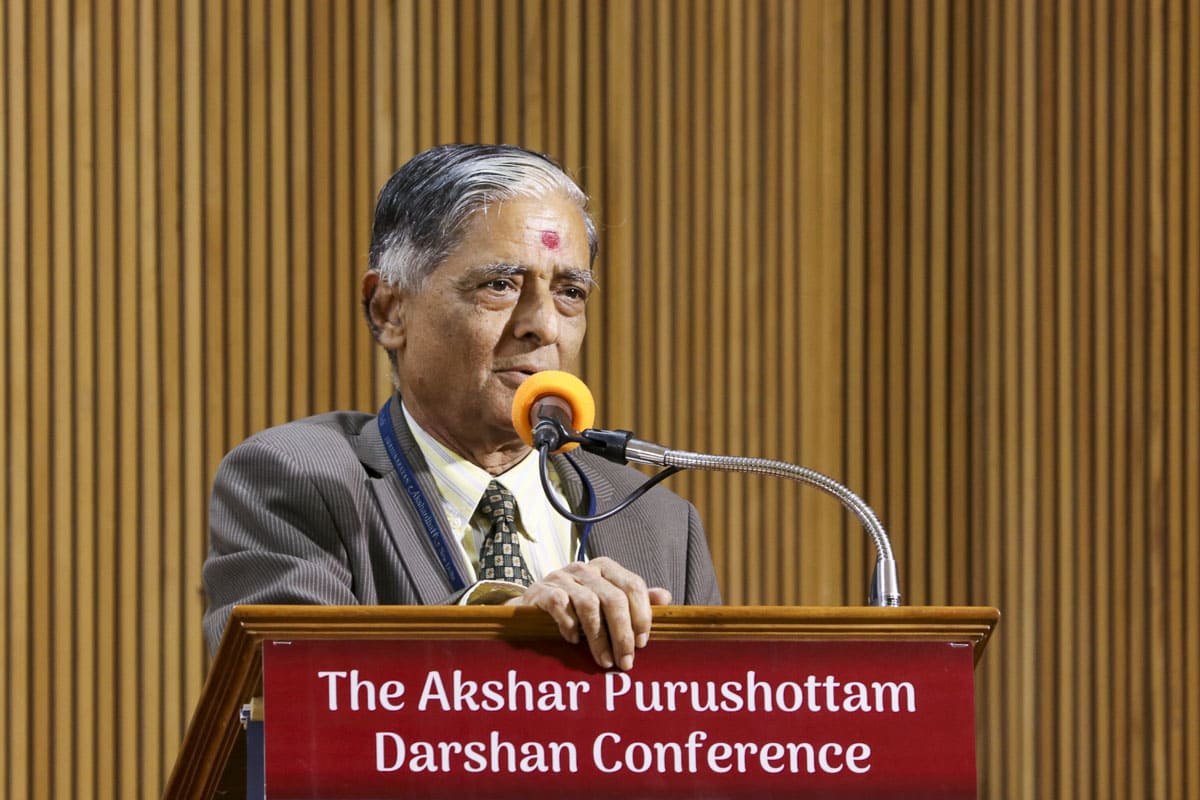 Prof. Jyotindra Dave delivers the vote of thanks