On 31 December 2022, an International Conference was held on the Akshar-Purushottam Darshan and its contribution to Vedic Sanskrit traditions at the Pramukh Swami Maharaj Nagar in Ahmedabad. The conference was organized by the BAPS Swaminarayan Research Institute, New Delhi in collaboration with Central Sanskrit University, New Delhi, Shree Somnath Sanskrit University, Veraval, and the Akshardham Center for Applied Research in Social Harmony (AARSH), Gandhinagar. The conference was organized as part of the centenary celebrations of his Holiness Pramukh Swami Maharaj in Ahmedabad.

Scholars of Sanskrit, philosophy, religion, and culture, from around the world participated in this one-day conference. The conference celebrated the ancient Indian tradition of Sanskrit learning, debate, and dialogue. It further highlighted the vibrant legacy of scriptures and its contemporary importance.

Prior to the start of the conference, scholars from more than 20 Sanskrit Universities were welcomed with a musical band. Led by learned swamis of the BAPS Swaminarayan Sanstha, Dr. Viveksagardas Swami, Mahamahopadhyay Bhadreshdas Swami, and Dr. Shrutiprakashdas Swami, the procession walked from the ceremonial gate of the Pramukh Swami Nagar to the Pramukh Swami Maharaj Vandana Sthal. Accompanied by the chanting of Vedic mantras for world peace and for the auspicious inauguration of the conference, the scholars paid tribute to the 30-foot murti of Pramukh Swami Maharaj.

The conference commenced with the chanting of Vedic mantras by Dr. Niranjan Mishra, an Associate Professor of the Central Sanskrit University, Tirupati. Following this, the deep pragatya ceremony was performed by Dr. Viveksagardas Swami, Mahamahopadhyay Bhadreshdas Swami, and Dr. Shrutiprakashdas Swami. Padma Shri Gautam Patel, the former Chairman of the Gujarat Rajya Sanskrit Academy, Padma Bhushan Mahamahopadhyay Vashishth Tripathi, the President of the Kashi Vidvat Parishad and retired professor at Sampurnanand Sanskrit University, Dr. Lalitkumar Patel, the Vice-Chancellor of Shree Somnath Sanskrit University, Shri Bhagyesh Jha, the Chairman of Sanskrit Sahitya Akademi, Shri Haridas Bhat, a renowned Sanskrit scholar on Dvaita darshan, and Shri Harekrishna Satapathy, the Vice-Chancellor of  the Kalinga Institute of Social Sciences, were amongst the dignitaries who participated in the ceremony. Vice-Chancellors of more than 20 Sanskrit Universities were present at the conference.

In his welcome address, Mahamahopadhyay Bhadreshdas Swami welcomed the assembly, which comprised of over 90 professors and learned scholars of Sanskrit, 20 Principals of Sanskrit Universities, and more than a thousand Sanskrit students. Inspiring the new generation of students as future scholars and professors, he brought to attention the presence of scholars from varying darshanic backgrounds.

After an introductory video of Shree Somnath Sanskrit University, Dr. Lalit Patel, the vice-chancellor of the university, paid homage to Swaminarayan Bhagwan and Pramukh Swami Maharaj for inspiring a vibrant scriptural tradition. He expressed his gratitude for providing Somnath University with the opportunity to collaborate at this conference. He acknowledged the role of Mahamahopadhyay Bhadreshdas Swami’s bhashya on the Akshar-Purushottam Darshan in globalizing not only the Swaminarayan tradition but also the universal principles of the Vedic tradition. He then said that “the Akshar-Purushottam Darshan bhashya, authored by Bhadreshdas Swami, has become authoritative and has passed the meticulous scrutiny of the most learned pundits in the scholastic world. He emphasized that the attitude of ‘may all religions flourish’ is at the center of Sanskrit learning. A pundit is one who sees everyone as equal regardless of caste. Pramukh Swami Maharaj lived the message of equality not just in thought but also in action. He lived each moment for others and cared for others.”

Shri Bhagyesh Jha, an ardent Sanskritist and former IAS officer, commented how “Pramukh Swami Maharaj’s centennial celebrations is an apt occasion for paying tribute to the ancient Sanskrit traditions that were given a new lease under Pramukh Swami Maharaj.” While evaluating the role of western philosophers and thinkers, he emphazised that “the West must recognize the Bhagavad Gita and the important role it can play in addressing the problems of contemporary society. The Sanskrit language has the potential to give voice to all.” He added that Pramukh Swami Maharaj was the right person “to promote the Sanskrit language as an effective medium to convey the Vedic values of love and forgiveness.”

Dr. Haridas Bhat, the former Principal of Poornaprajna Vidyapeetha, Bangalore, and a former tutor to Bhadreshdas Swami, stressed the importance of taking Indian scriptures and wisdom to the West. Just as Swami Vivekanand was able to take Ramakrishna Paramhansa’s teaching to the World Parliament of Religions in Chicago, he articulated how “Bhadreshdas Swami is able to disseminate the teachings of Pramukh Swami Maharaj to the rest of the world. The uniqueness of the Akshar Purushottam Darshan lies in the fact that Bhadreshdas Swami, the writer of the commentaries, brought out the darshanic teachings of Bhagwan Swaminarayan and not his own.” He also acknowledged the uniqueness of the seventh darshan, the Akshar-Purushottam Darshan, which reveals the existence of two brahmans.

Thereafter, Dr. Shrutiprakashdas Swami emphasized the universality and comprehensiveness of the Sanskrit language. He reasoned, “Sanskrit has influenced philosophical traditions even in Europe. Sanskrit has a shared heritage and association with other philosophical languages of the world. For that very reason, Pramukh Swami Maharaj encouraged Bhadreshdas Swami to contribute to the language and its wisdom by composing a bhashya on the Akshar-Purushottam Darshan.” He continued, “The Akshar-Purushottam Darshan is an example of consolidated wisdom taught by Bhagwan Swaminarayan two centuries ago… The Akshar-Purushottam Darshan is alive and vibrant through the many works of the BAPS Swaminarayan Sanstha.”

In his informative speech, Dr. Atmatruptdas Swami presented initiatives inspired  by Pramukh Swami Maharaj and Mahant Swami Maharaj toward internationalizing Sanskrit language learning. He said, “This year, through the inspiration of Mahant Swami Maharaj and the dedicated efforts by Bhadreshdas Swami, seven new BAPS Swaminarayan Research Centers have been inaugurated in London (United Kingdom), Robbinsville (United States of America), Toronto (Canada), Sydney (Australia), Brisbane (Australia), Nairobi (Kenya), and Johannesburg (South Africa). These research institutes promote Sanskrit language learning and an in-depth study of scriptures for communities around the world.” Thereafter, a documentary video featuring an online platform called “International Online Sanskrit Gurukulam” was showcased. The online platform seeks to make Sanskrit learning and literature more accessible. Video testimonials were also presented of the students who use this platform, many of whom were young children. One young student explained that “Sanskrit learning helps me study other courses more systematically.” Another student mentioned that “Sanskrit awakens my inner intellectual energy and sharpens my critical thinking skills.”

Thereafter, Dr. Aksharananddas Swami introduced the BAPS Swaminarayan Research Journal, an academic publication dedicated to providing a forum to present academic and original research on Vedic traditions. Encouraging multidisciplinary approaches such as religion, philosophy, literature, agriculture, linguistics, architecture, music, and others, the journal hopes to promote original research on Vedic traditions and their application in contemporary society. Adhering to rigorous selection standards of blind peer review, the journal will be made accessible on the Digital Object Identifier system; making its access and retrieval easier for the academic community. The readership of the journal spans over 35 countries and includes English, Hindi, as well as Sanskrit audiences. The recently published second issue of the journal was then inaugurated by Dr. Viveksagardas Swami, Mahamahopadhyay Bhadreshdas Swami, and other dignitaries.

Shri Vijaykumar Menon, the Vice-Chancellor of Maharshi Panini Sanskrit and Vedic University, then highlighted Pramukh Swami Maharaj’s contribution to upholding and enhancing Vedic traditions. He focused on Swamiji’s work of building  mandirs, schools, colleges, and hospitals; his intiation of swamis; and his relief and welfare activities. He also emphasized that BAPS continues to “practically implement the principles taught and lived by Pramukh Swami Maharaj.”

Shri Vijaykumar Menon announced a Letter of Recognition unanimously awarded to Pramukh Swami Maharaj by more than 20 Vice-Chancellors and former Vice-Chancellors of Sanskrit Universities. The letter paid tribute to the numerous social and spiritual activities selflessly initiated by Pramukh Swami Maharaj and conferred upon him the title of “Sanatana Dharma Jyoti.” The letter further acknowledged the Akshar-Purushottam Darshan as the seventh authoritative darshan.

Shri Vashishth Tripathi, the President of Kashi Vidvat Parishad, paid tribute to the tradition of Bhagwan Swaminarayan for “its purity of thought and for imparting light of knowledge that destroys darkness.” He also expressed deep gratitude for Mahant Swami Maharaj as “the living embodiment of knowledge received in an unbroken lineage from Bhagwan Swaminarayan.” He further added, “The Akshar-Purushottam Vedanta Darshan must be unanimously recognized as a authentic darshan. I have met Pramukh Swami Maharaj only once, but in that moment I experienced that he embodied all the virtues sung in the Vedas.”

The conference concluded with a round table session. Scholars first presented their poetic and literary tributes to Pramukh Swami Maharaj, the Akshar-Purushottam Darshan, and the Pramukh Swami Maharaj Nagar. Thereafter, discussions ensued on establishing the universality and comprehensiveness of Sanskrit literature while addressing the need of making the Sanskrit language accessible to the world. These discussions were coupled with insights into the role of Sanskrit in understanding darshanic thought and philosophy. Scholars further deliberated on the sustainability and universality of Vedic principles. The session concluded with discussions on the applications of the conference for the future generation. 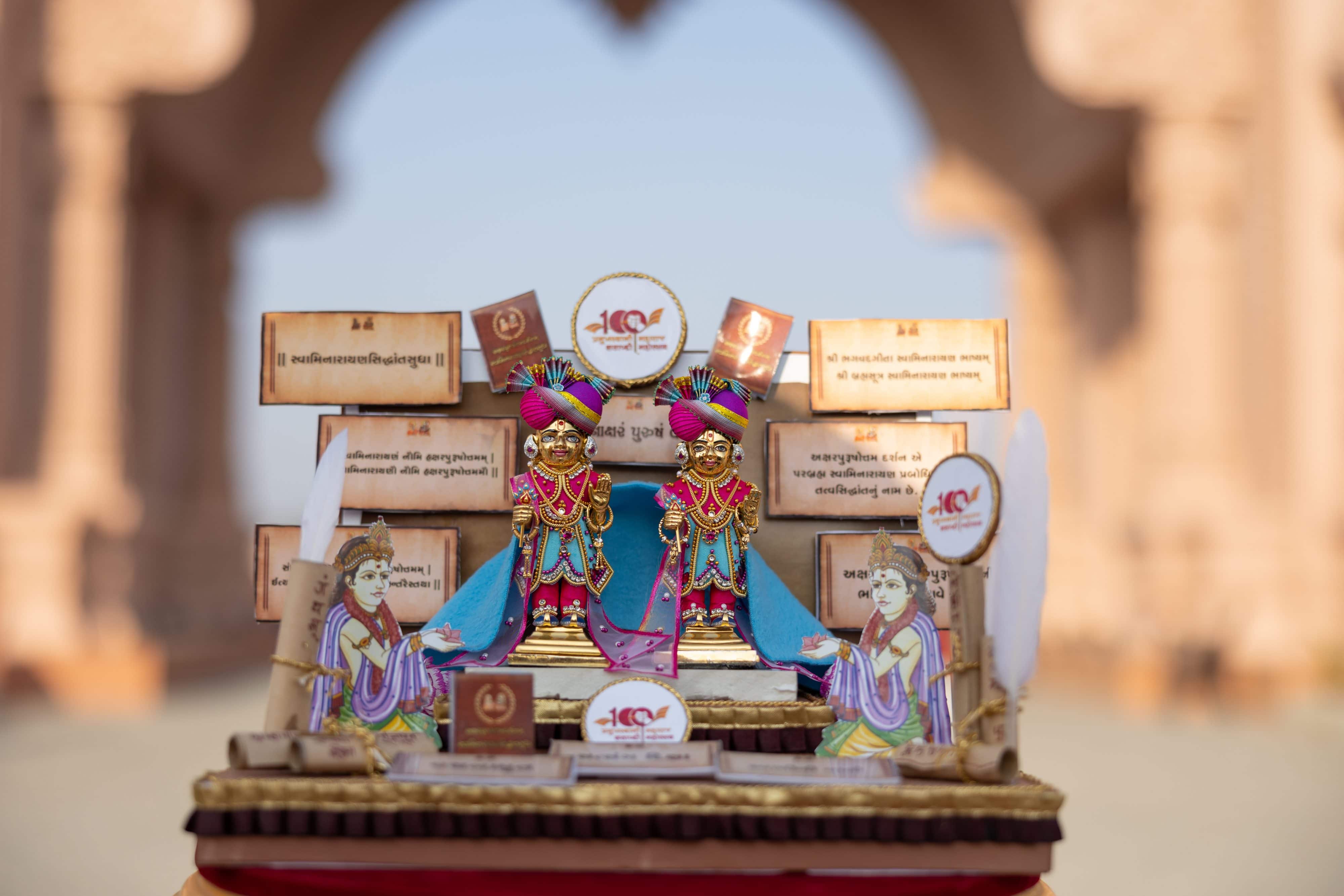 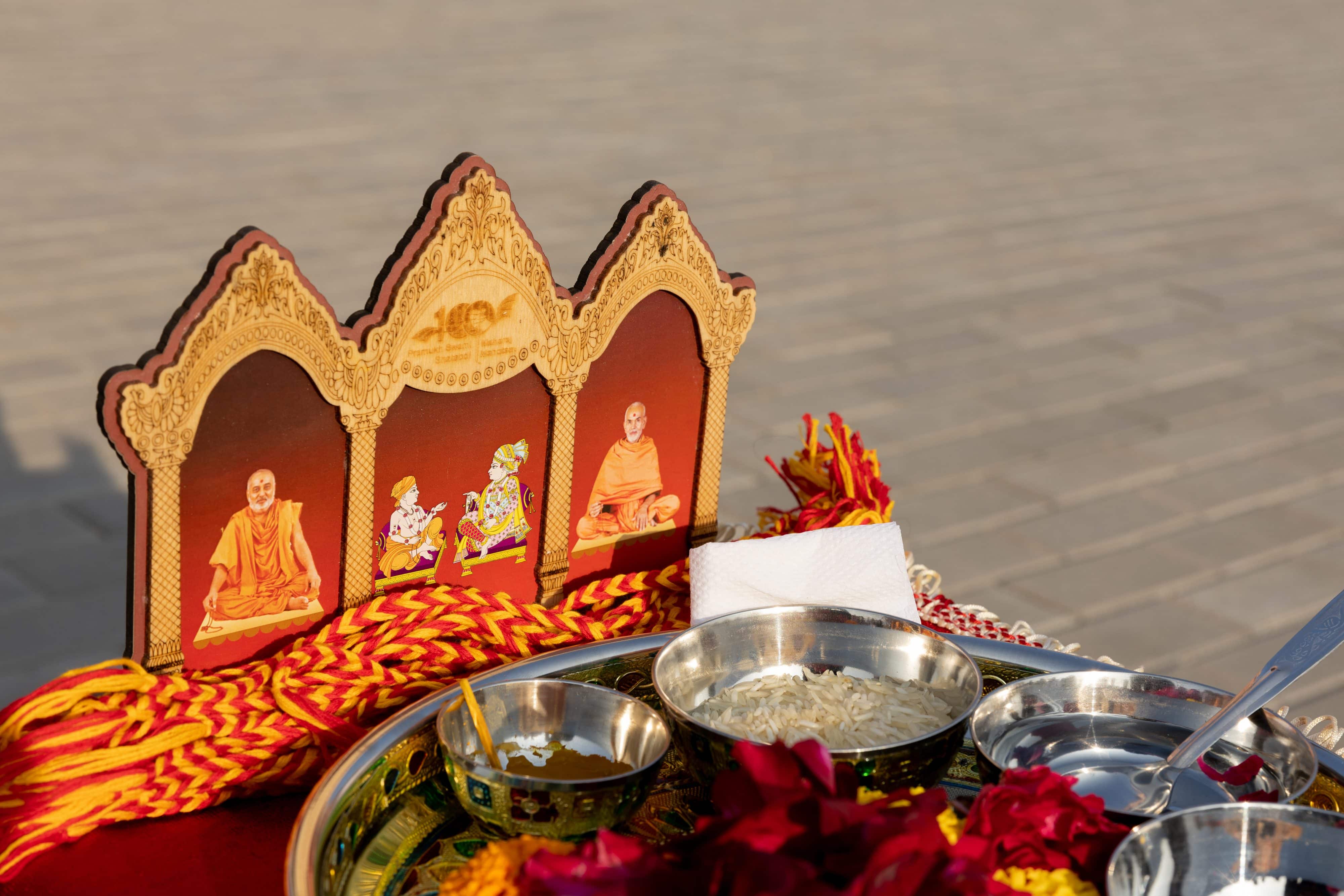 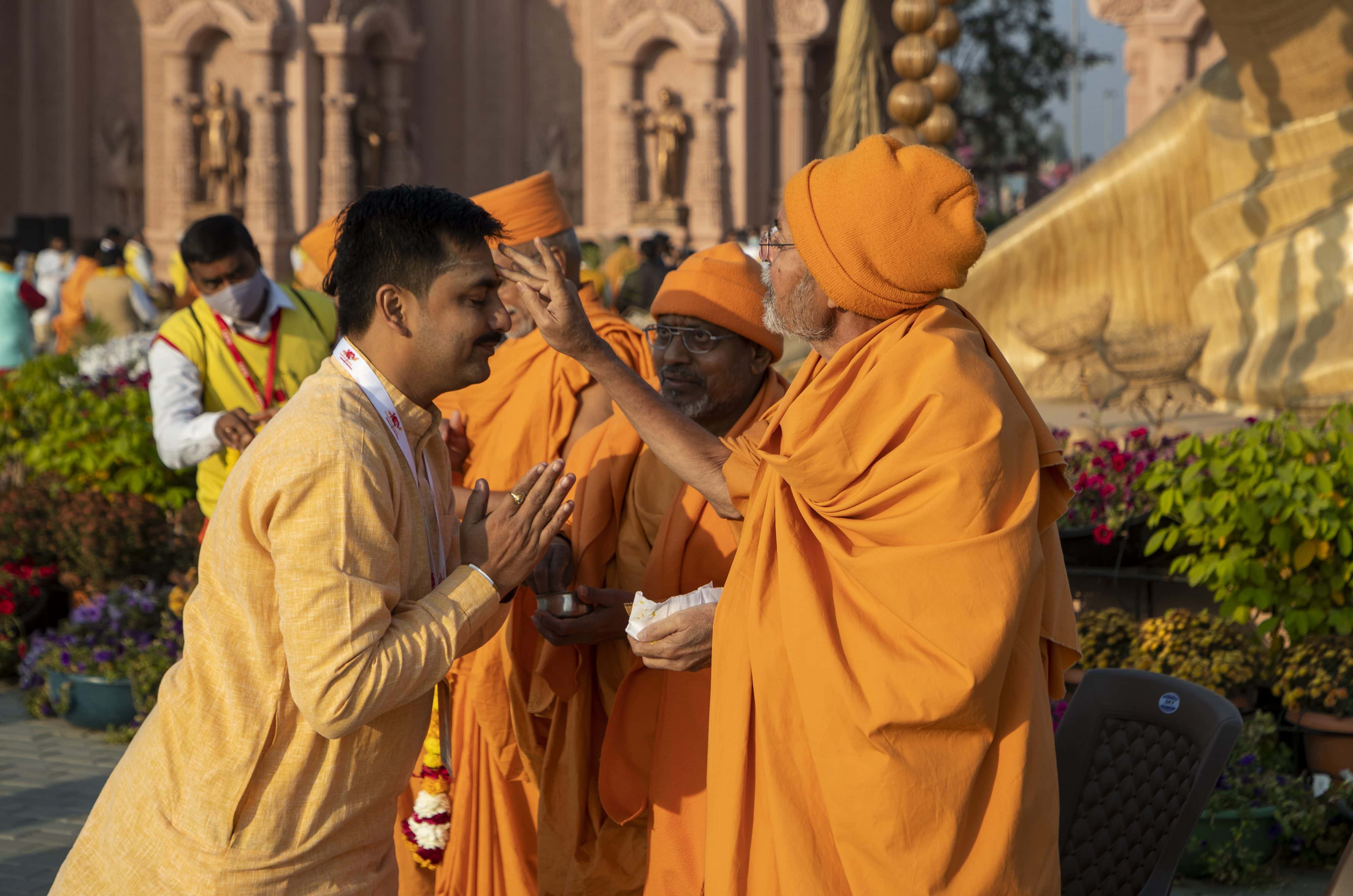 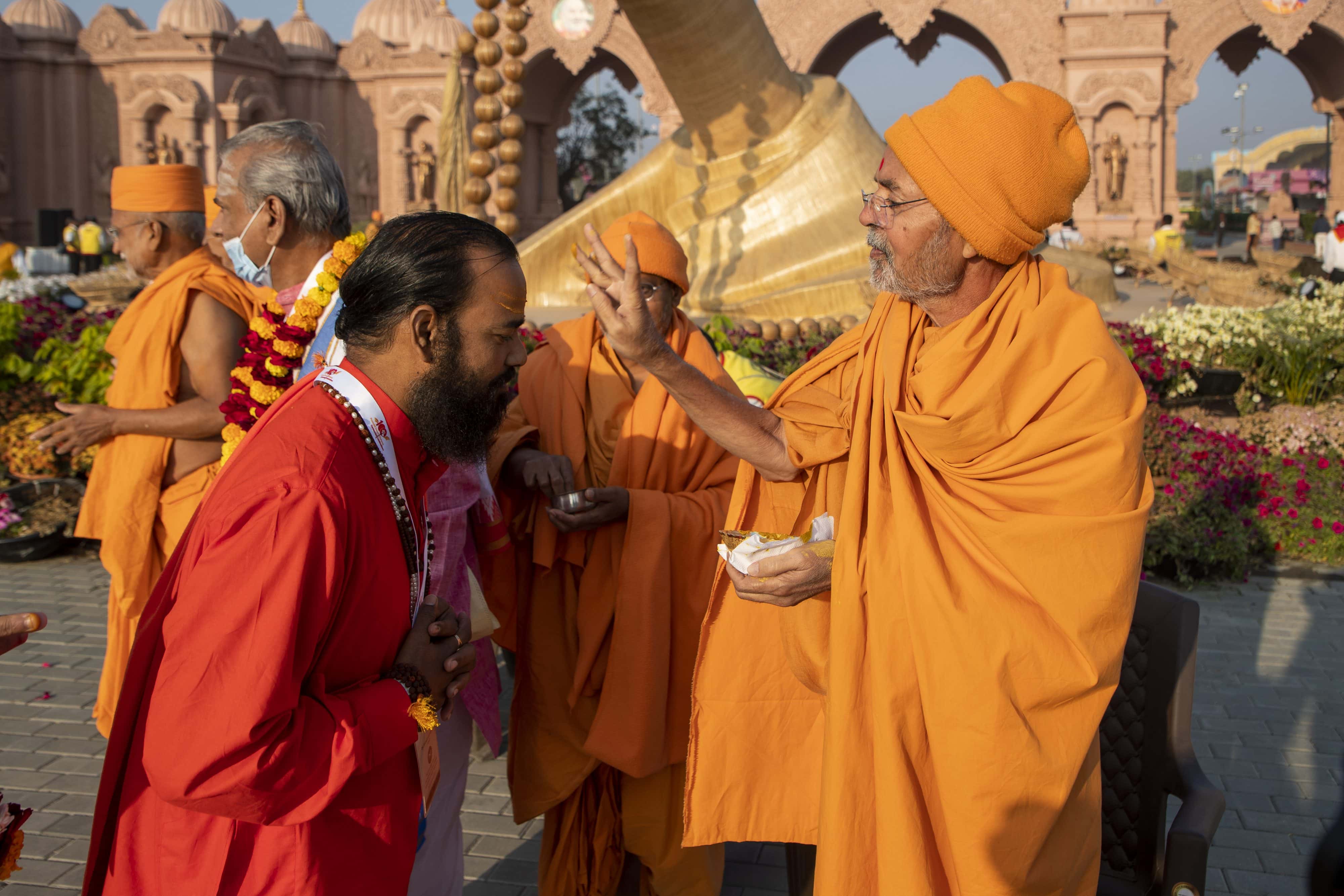 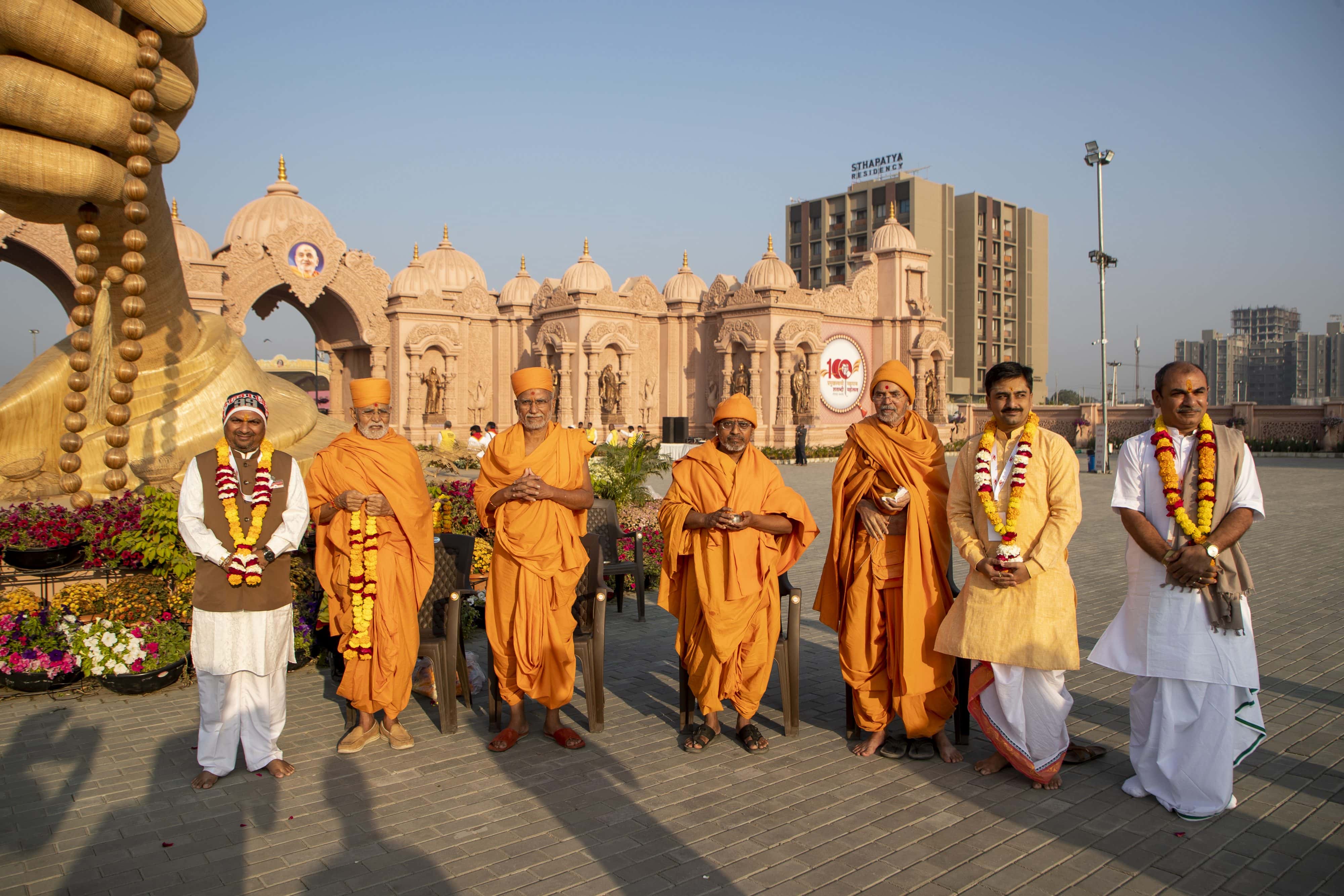 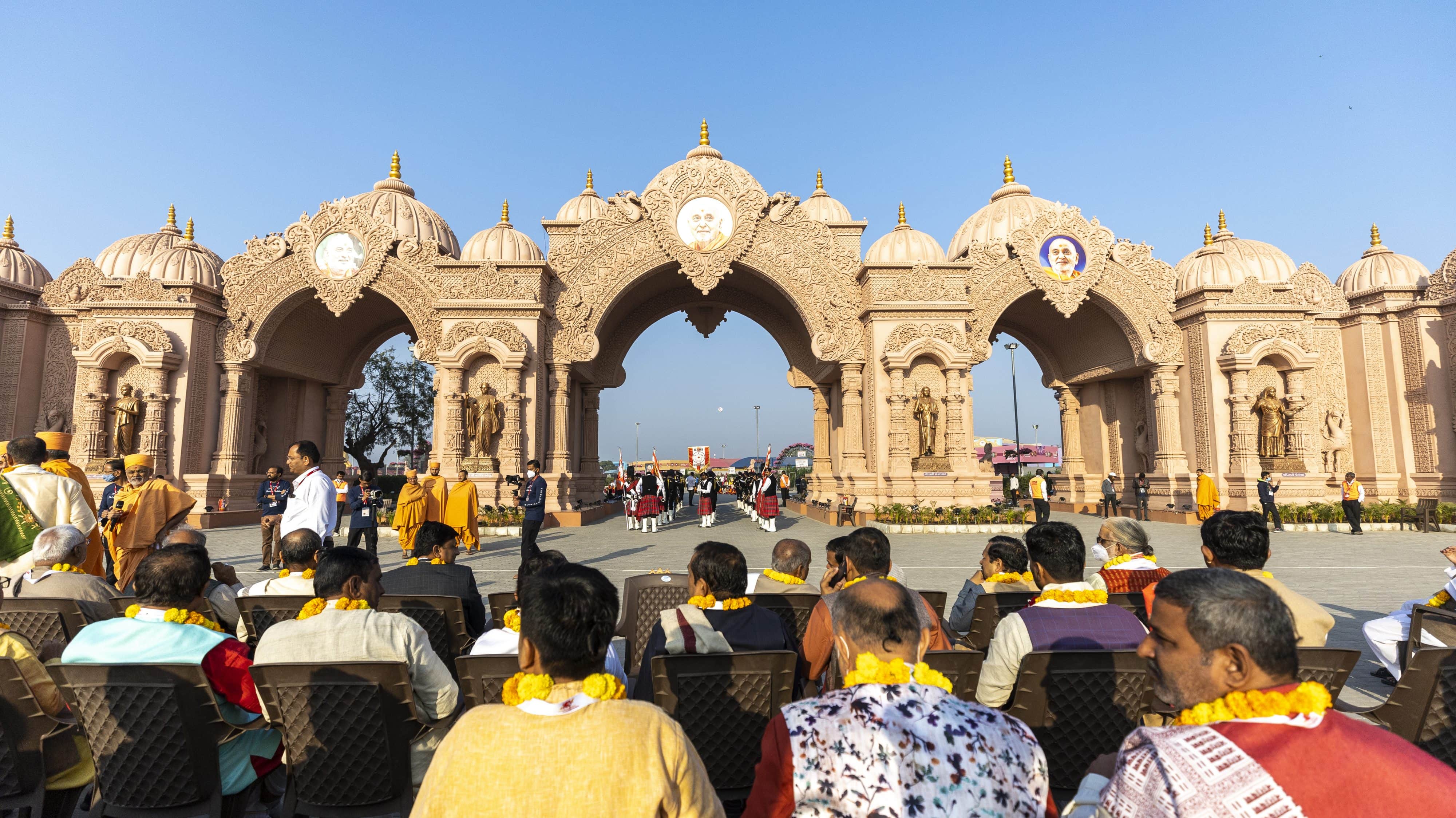 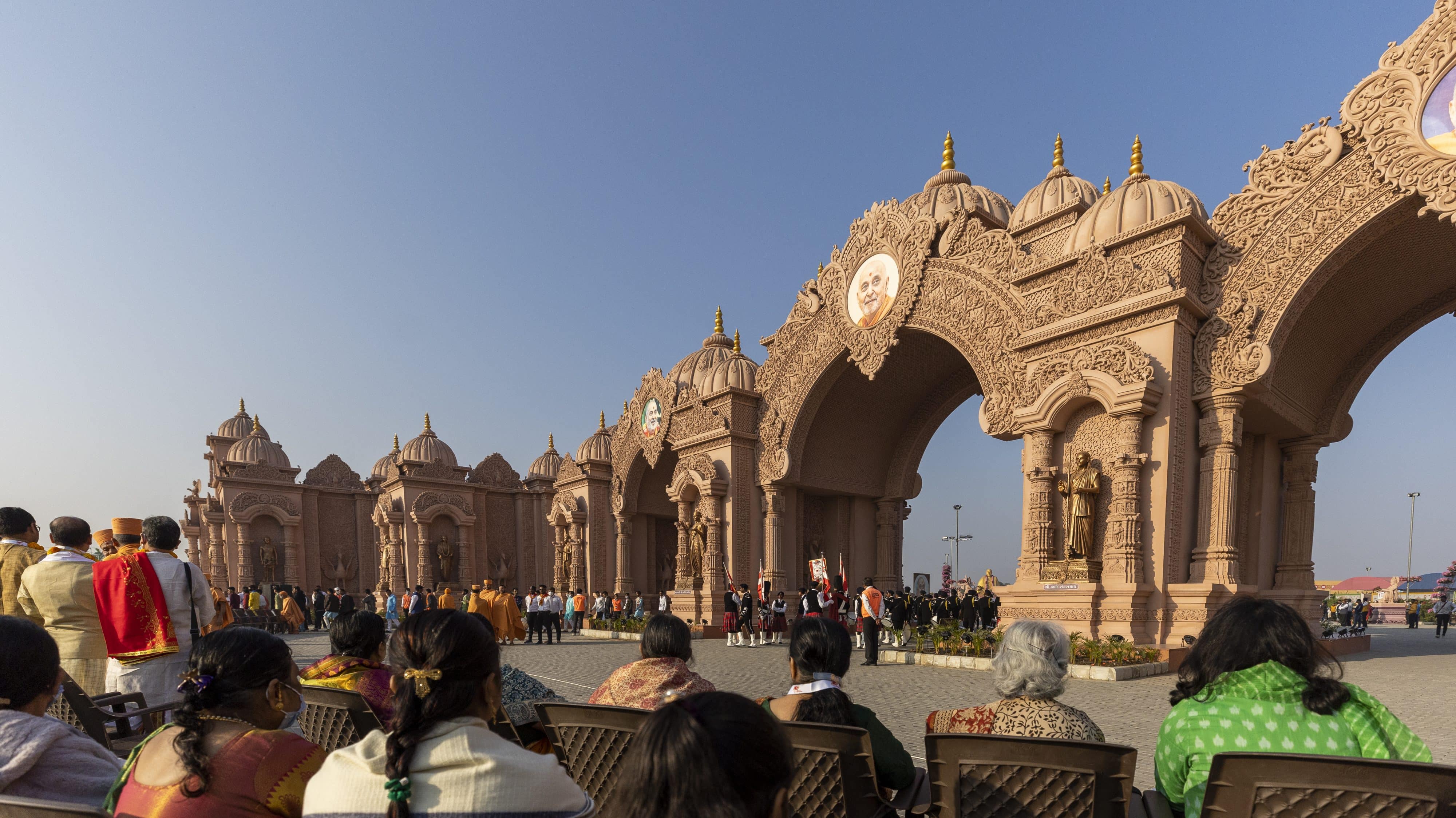 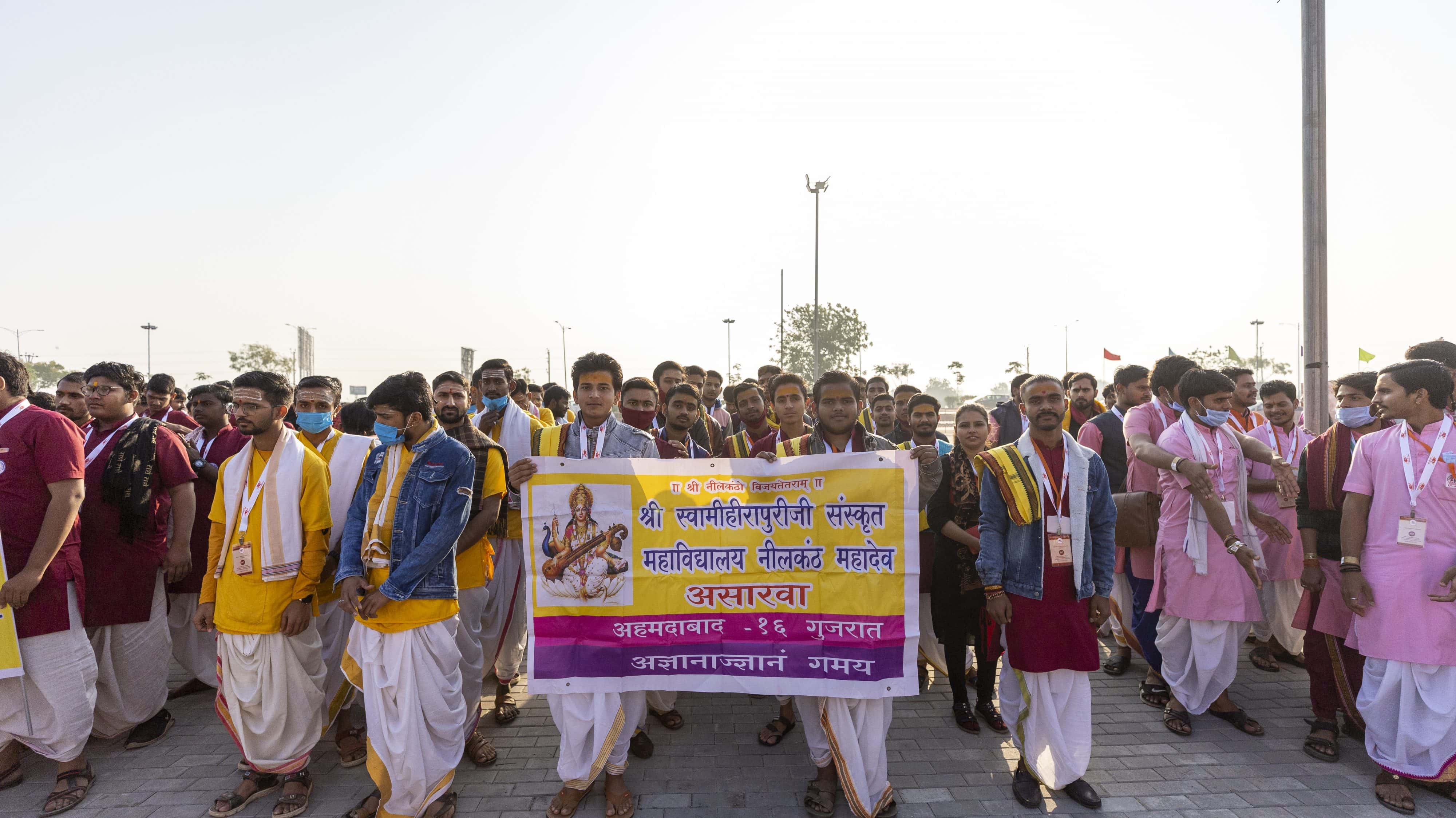 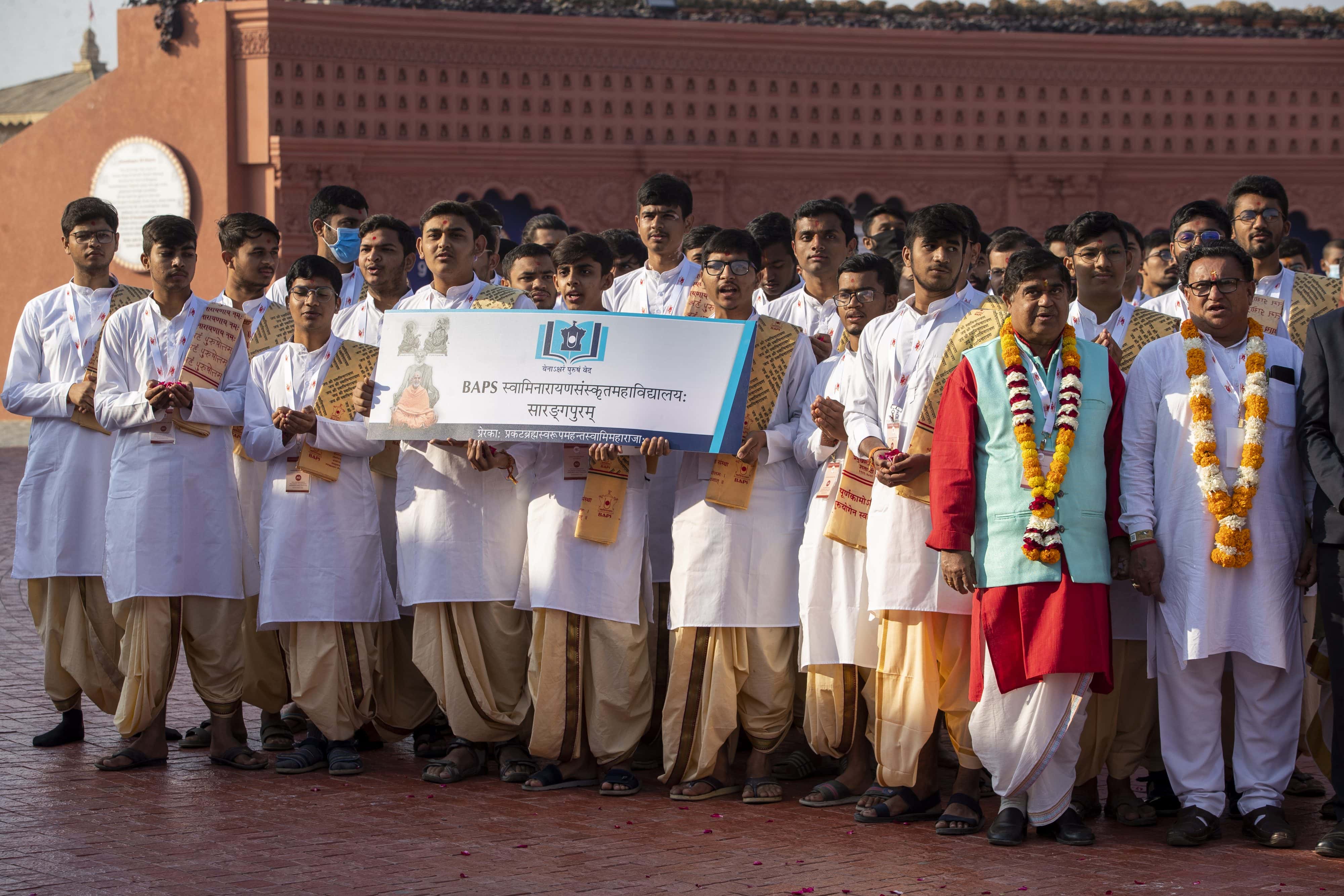 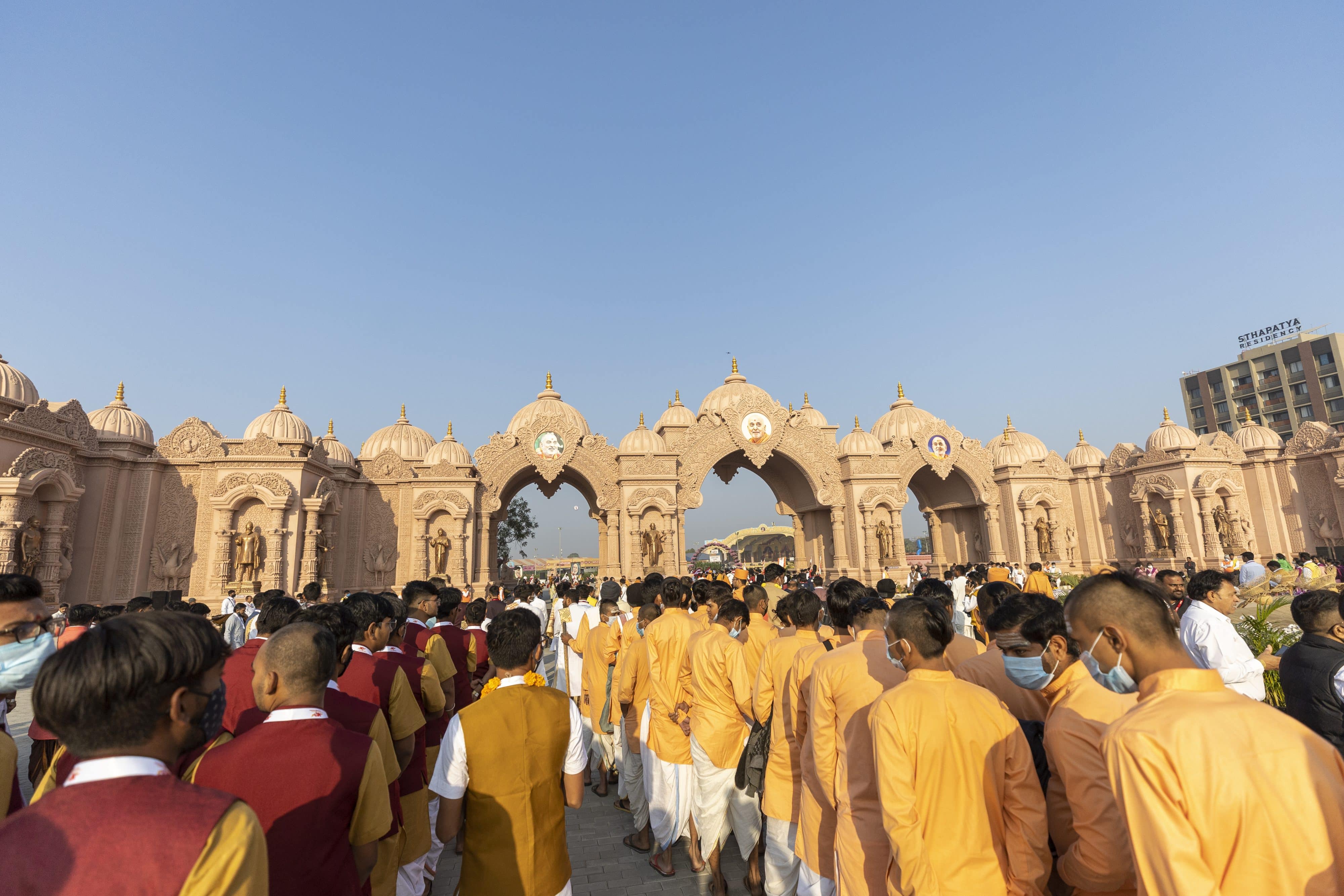 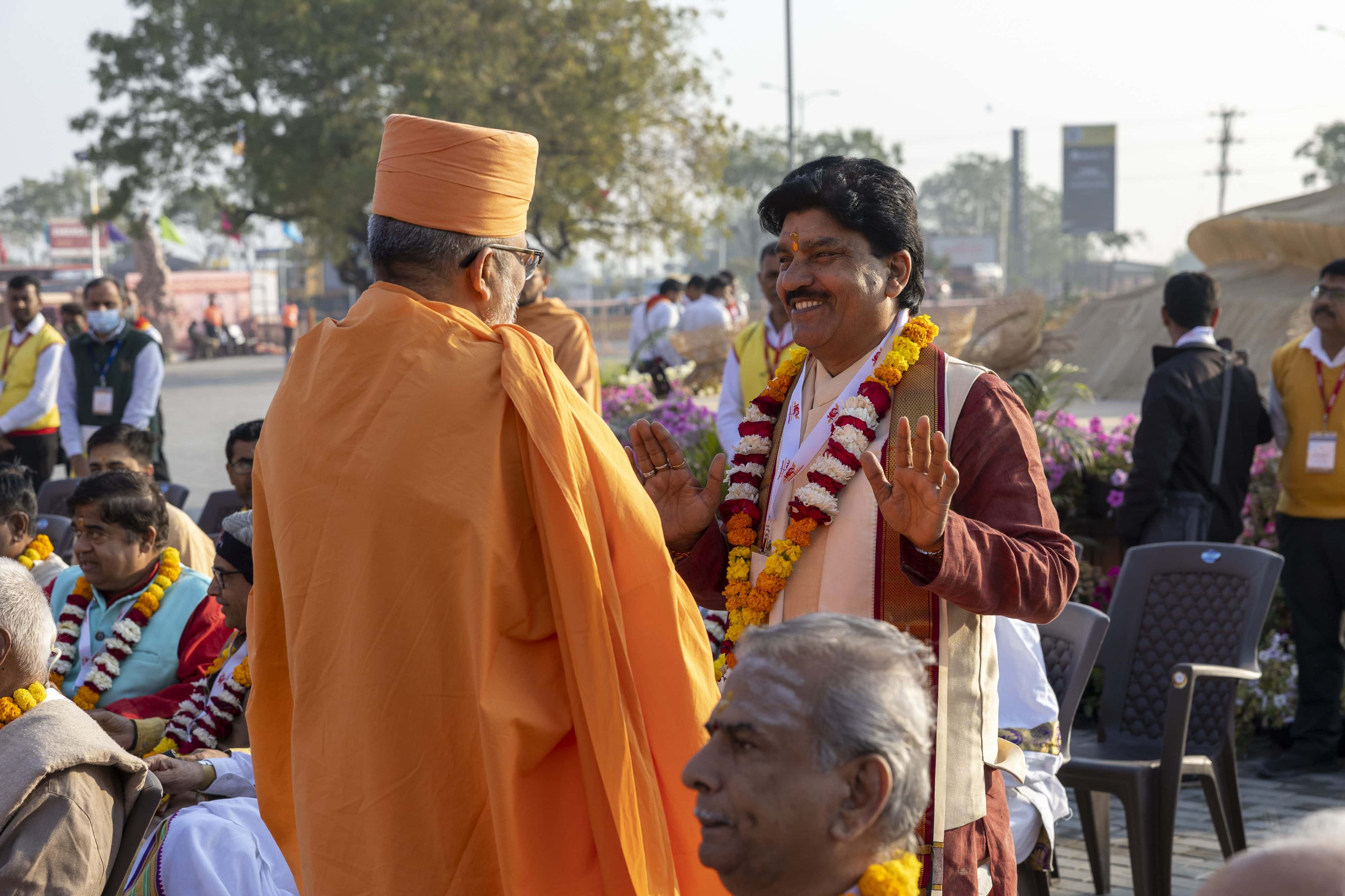