An International Conference on Swaminarayan bhakti literature was held on 26 December 2022 at the Pramukh Swami Maharaj Nagar in Ahmedabad. Scholars, writers, poets, and intellectuals discussed the significance of literature produced by Swaminarayan bhakti poets from the eighteenth century to the present day. The conference was organized by BAPS Swaminarayan Research Institute, New Delhi, in collaboration with Gujarat University, Ahmedabad on the occasion of the centenary celebrations of his Holiness Pramukh Swami Maharaj.

The Swaminarayan tradition possesses a rich and diverse multilingual repository of prose and poetry. The detailed study and analysis of the contributions of scholars, poets, musicians and litterateurs provide a deep insight into the culture, history, religion, customs and traditions. The conference was organized to discuss the role of Bhagwan Swaminarayan, his disciples, and the legacy of Swaminarayan bhakti poets in enriching the heritage of not only Gujarat but the South Asian literary world at large.

In his inaugural speech, Prof. Himanshu Pandya, Vice-Chancellor of Gujarat University, expressed pleasure on behalf of Gujarat University in organizing this “historic conference.” He praised “the unique quality of Swaminarayan literature” for its simplicity and universality. In his inaugural speech, Prof. Raghuvir Chaudhari, author of more than 80 books and the recipient of Sahitya Akademi Award and Jnanpith Award, emphasized the teachings of Bhagwan Swaminarayan in the promotion of Gujarati literature. He also added that “Pramukh Swami promoted the Gujarati language through his speech at the Millennium World Peace Summit at the United Nations.” Pointing to individual swamis of the BAPS Swaminarayan Sanstha, he mentioned their achievements in the field of music, literature, and social service. He further mentioned that “the element of religion and spirituality introduced at the R20 Summit [in Indonesia] now constitutes a historical moment.”

Shri Anil Joshi, a renowned poet and ​​recipient of Sahitya Akademi Award, recounted his memories with Yogiji Maharaj and Pramukh Swami Maharaj. He narrated how their encouragement to study and recite poetry played a significant role at critical junctions in his career.

In his keynote speech, the Chairman of Gujarat Sahitya Akademi, Shri Bhagyesh Jha, elaborated on the literary creations by Bhagwan Swaminarayan’s illustrious disciples and highlighted their practical relevance. He added that the bhakti, spirituality, and metaphysics harmoniously expressed through Swaminarayan literature can be witnessed in the Pramukh Swami Maharaj centenary celebrations. He further elaborated, “We need to travel through the literary universe of these bhakti poets. If we do so, then we will feel connected to the cosmic energy and bliss experienced by them. The poetries of Brahmanand, Muktanand, and Premanand are metaphysical commentaries that enlarge our understanding of life and universe.”

Prof. Balvantrai Jani, Chancellor of Doctor Harisingh Gour Vishwavidyalaya Sagar, emphasized the role of Brahmanand Swami in the devotional literature of Gujarat. He paid tribute to several genres of literature—biographical, theoretical, lyrical, and philosophical—penned by Brahmanand Swami. As a multilingual and multi-dimensional poet, Prof. Jani argued, Brahmanand had the ability to create poetries in an instant. He said, “Pramukh Swami’s centennial celebrations will serve as a perfect prelude to the 250th anniversary of Brahmanand Swami. Inspired by Sahajanand Swami, Brahmanand Swami fostered relationships with people from other religions including the Muslim Nawab of Junagadh.”

The inaugural session concluded with Yogi Trivedi, a former journalist at CNN and CBS and Adjunct Professor of Journalism at Columbia University. He narrated incidences where Pramukh Swami Maharaj inspired him “to study literature without ego and to make scholarship accessible to the outside world.” He recalled how Pramukh Swami Maharaj had advised him, “Do something for your community. Educate your mind, and then educate others.” At the end of the session, Yogi Trivedi’s newly published book, In Love, At Ease: Everyday Spirituality with Pramukh Swami, was felicitated and distributed to the stage guests.

The plenary session started with Shri Kumarpal Desai. In his address, he emphasized “the need to evaluate literary works of the Swaminarayan tradition from our own perspective.” He further stated, “The work of these bhakti poets is as meaningful as those of Narsinh, Mira, and Surdas.” He further mentioned that the literature of Swaminarayan bhakti poets was a reflection of their inner self where the message of detachment and asceticism is woven with the message of loving devotion.

Thereafter, Prof. Madhav Ramanuj, editor of Akhand Anand and the former President of Gandharv Sangeet Vidyalaya Trust, Ahmedabad and Gujarati Sahitya Parishad, recounted his experience of the conference on “Sahajanand Swami and the Swaminarayan Sampradaya,” held in New Delhi in 2013. He shared his fond memories with Pramukh Swami Maharaj and how Swami often invited him to participate in various conferences and events.

Shri Vasant Gadhvi, the former State Chief Information Commissioner of Gujarat, highlighted Gandhi’s role in promoting the bhakti literature of Mira and Narsinha Mehta. Equating Swaminarayan bhakti literature with “the sacred flow of Ganga,” he brought to attention the role of Dalpatram Travadi, a renowned 19th-century poet, in furthering Gujarati literature. He noted that Pramukh Swami Maharaj’s unique contribution lay in not only identifying societal concerns but also helping resolve them. He concluded by stating, “The Swaminarayan intellectual and bhakti traditions will herald a new era in literature and inspire all of humanity.”

In his concluding remarks for the session, Mahamahopadhyay Bhadreshdas Swami emphasized the simplicity and accessibility of the bhakti literature of the Swaminarayan poets. He said, “Poets thrive through imaginative freedom, and cannot be bound by formal rules of language and grammar. Words in literature are the embodiment of experienced emotions. A poet is not born through mere training but inherently through one’s own trials and tribulations.” He further stressed that traditional music associated with historical works of poetry must be preserved.

In the parallel session chaired by Hasyada Pandya Dr. K.M Chavda, an Associate Professor of Sanskrit Department at Gujarat Arts and Science College, presented on the importance of simplicity and unique moral qualities of Swaminarayan literature such as the Swamini Vato. Anchit Jain, a research scholar at the University of Delhi, explained how versions of Sanskrit commentaries produced in the Swaminarayan Sampradaya must be read in the context of the historical needs of the community and changing socio-historical climate. Shri Sarju Patel, a graduate student at the University of Chicago, explained the importance of reading the textual records of Gopalanand Swami’s sermons in establishing Gunatitanand Swami as Aksharbrahman. Dr. Iva Patel, an Assistant Professor at Augsburg University, focused on the Dhiraj Akhyan of Nishkulanand Swami which, she argued, is a text celebrating devotion along with ascetic ideals. She then elaborated on how the text exhibits one’s trust in God, emphasizes belief in God as the all-doer, and expresses the desire to experience the joys of devotion. Shri Jayesh Acharya, a postgraduate student at the Maharaja Sayajirao University of Baroda, Vadodara, then presented on the Vachanamrut, the recorded teachings of Bhagwan Swaminarayan. He showed the openness of debate and accessibility of spiritual discussions in the text. Finally, Shri Kirtan Patel, a graduate student at the University of Texas, focused on the literary works of the sadhus and disciples of Shastriji Maharaj. These poets used bhakti poems as a medium to memorialize events, record history, and celebrate key events

In the concluding session, Dr. Shrutiprakashdas Swami, elaborated the importance of the recently published Sanskrit text, Akshar-Purushottam Mahatmya, which aims to historically record the authenticity of the theology of Akshar and Purushottam. Swami then highlighted the rigorous cross-checking of references required to compile the text. He also mentioned the keen involvement of Pramukh Swami Maharaj during the writing process. Thereafter, Shri Vasant Gadhvi emphasized the lyrical quality of Brahmanand Swami’s poetic works. “These works were accepted by musicians and audiences on the merit of its quality,” he said. He also noted how the present conference played a significant role in evaluating the underappreciated role of Swaminarayan literature in enhancing the beauty and richness of Gujarati literature. He finally concluded by stating that the Swaminarayan literature has performed the task of bringing together diverse individuals, communities, cultures, and religions. In his concluding speech, Dr. Balvantrai Jani mentioned how the Gujarati language was preserved through the creation of the Vachanamrut. He said, “The works of Swaminarayan bhakti poets like Brahmanand Swami, Premanand Swami, and others are unparalleled and timeless. The true importance of this literature lies in its ability to sanctify the hearts and minds of devotees.” At last, Dr. Jyotindra Dave expressed his gratitude to Aksharvatsaldas Swami, Shrutiprakashdas Swami, Bhadreshdas Swami and other swamis for organizing this conference, as well as eminent dignitaries and over 150 delegates for ensuring the conference was a success. 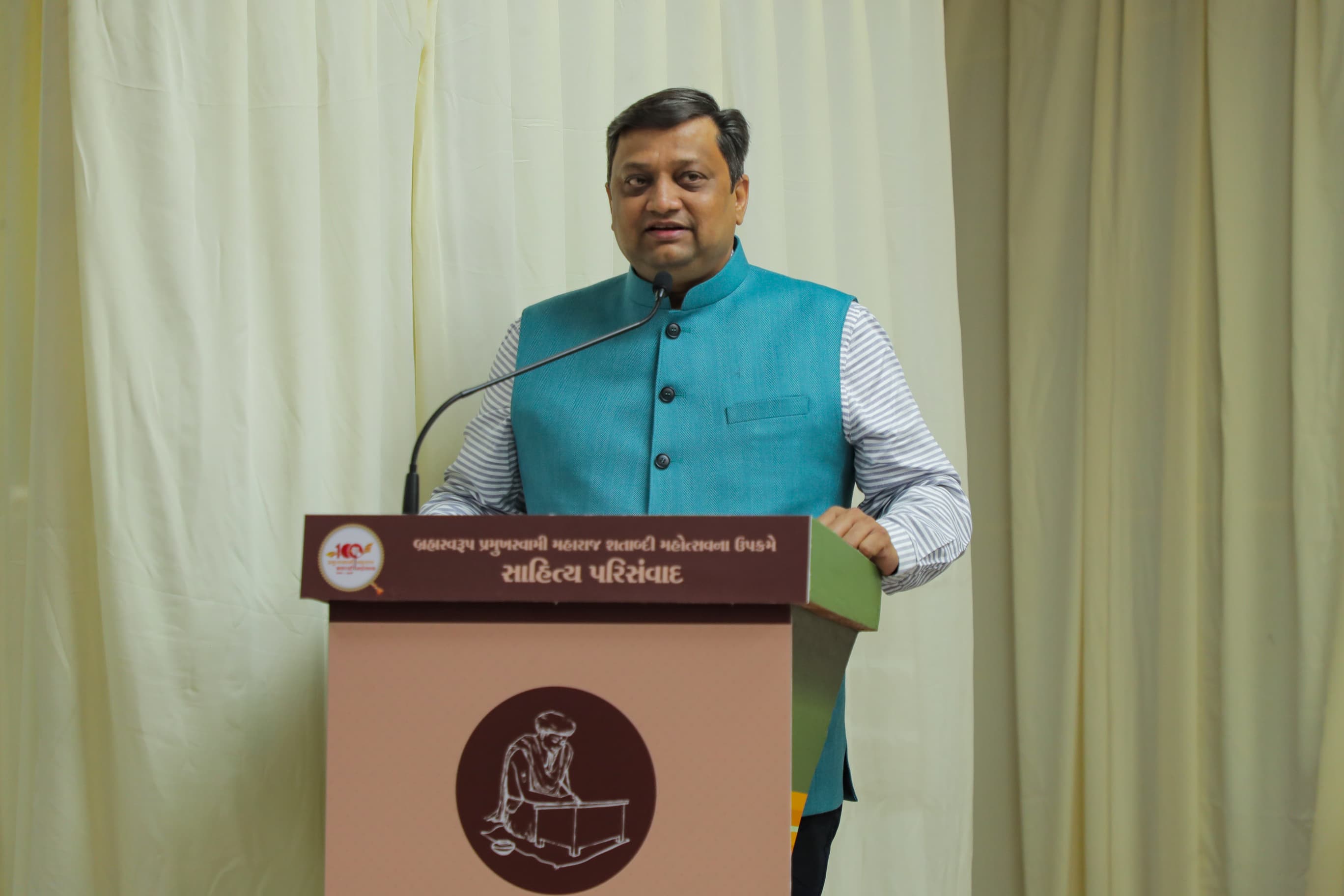 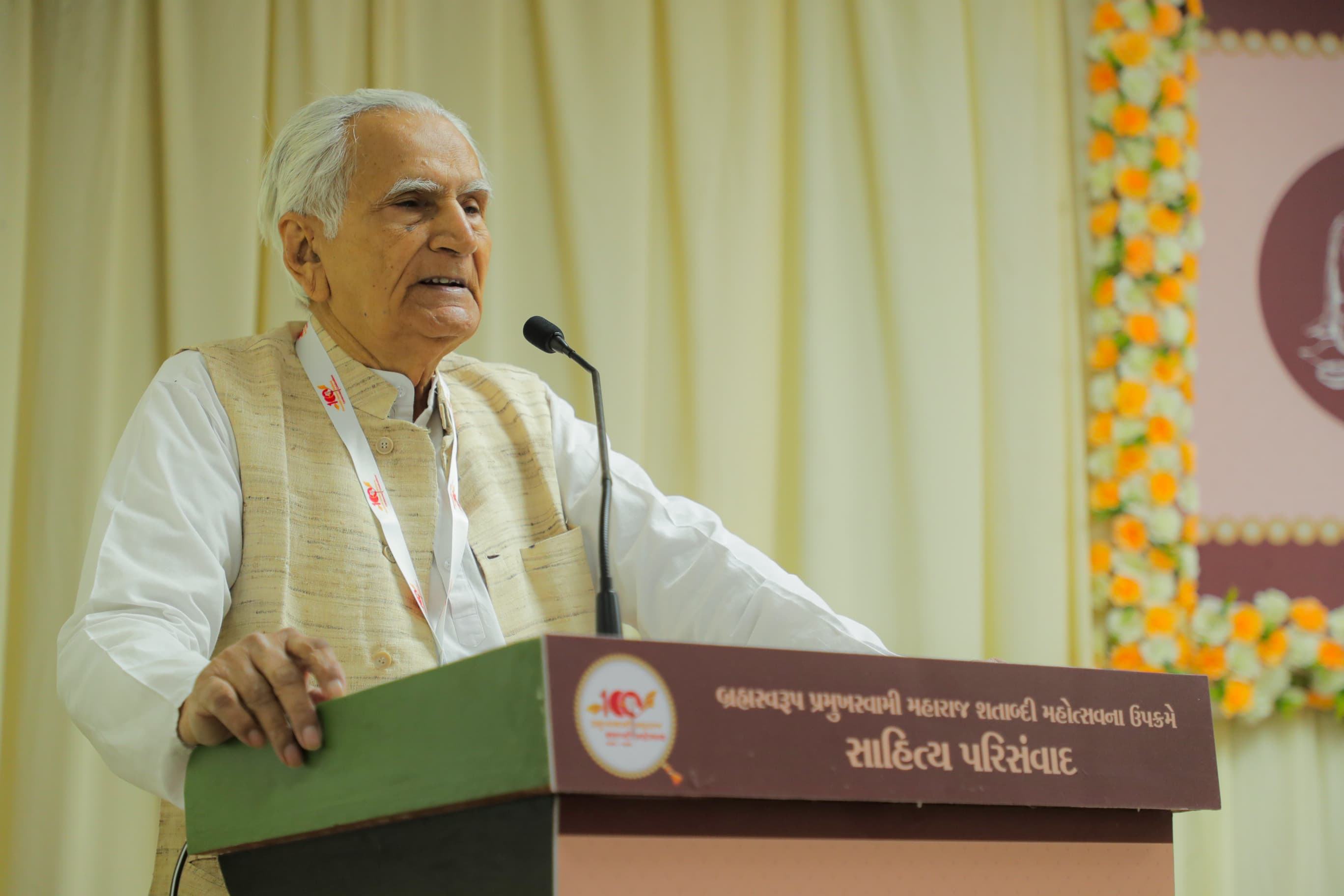 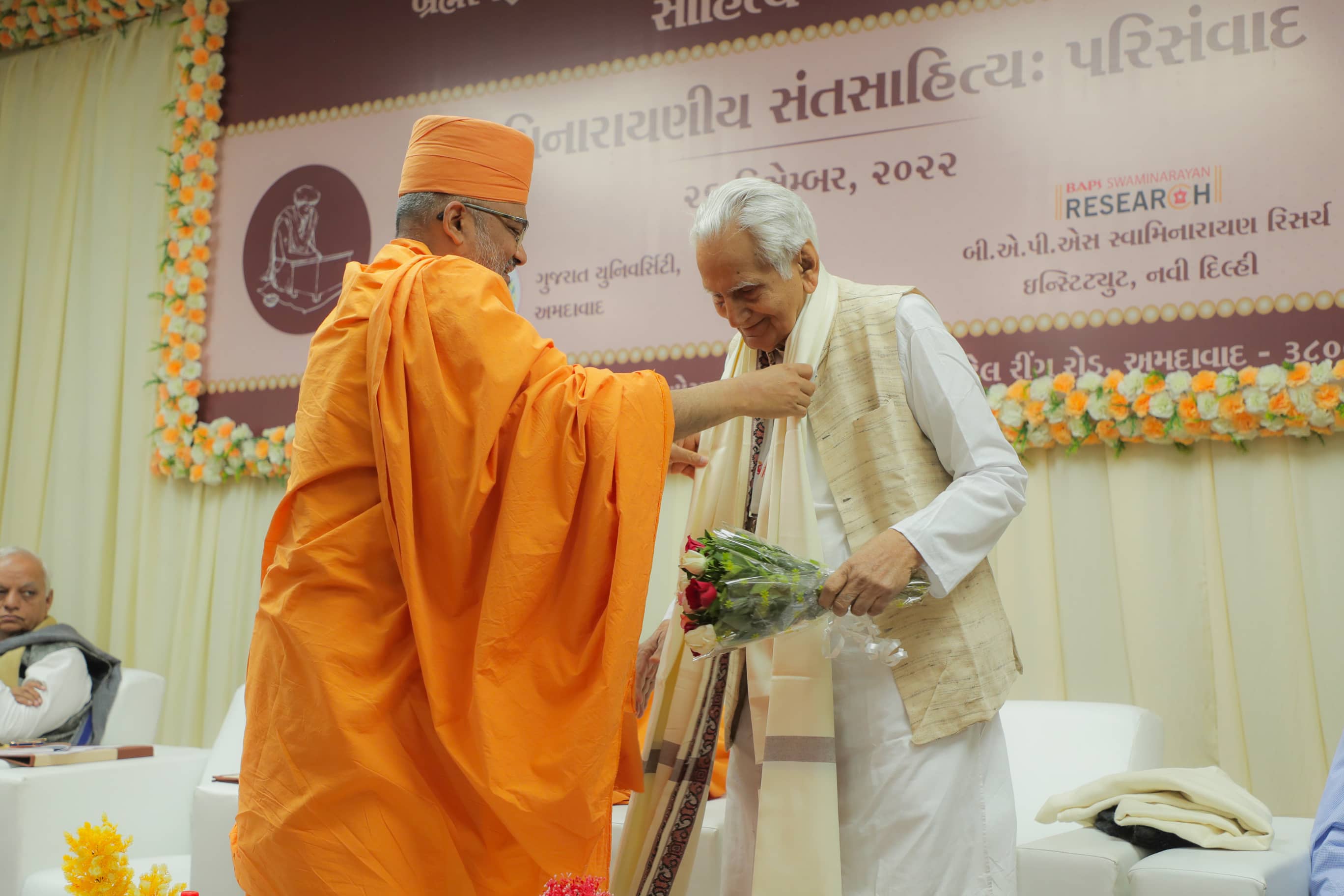 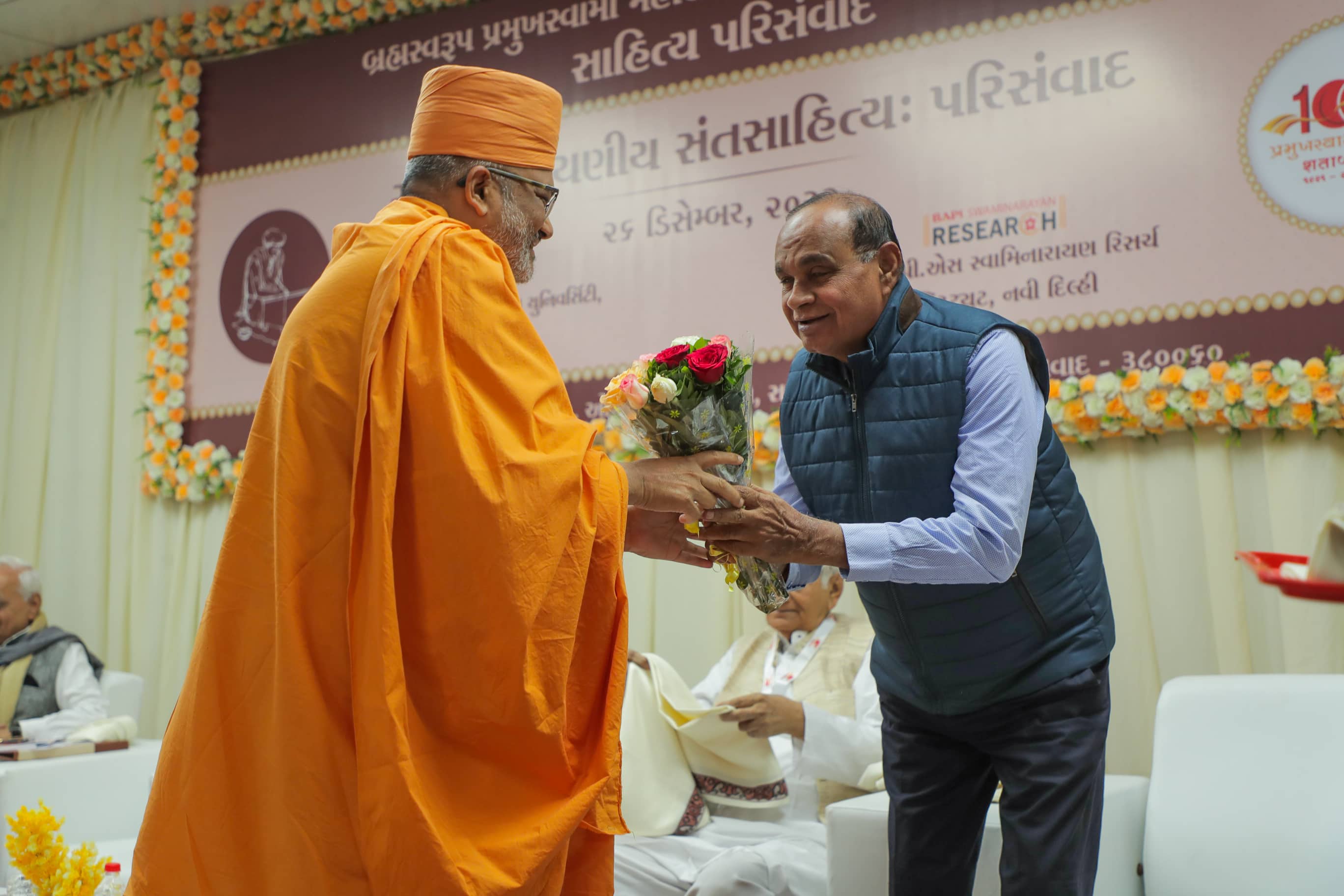 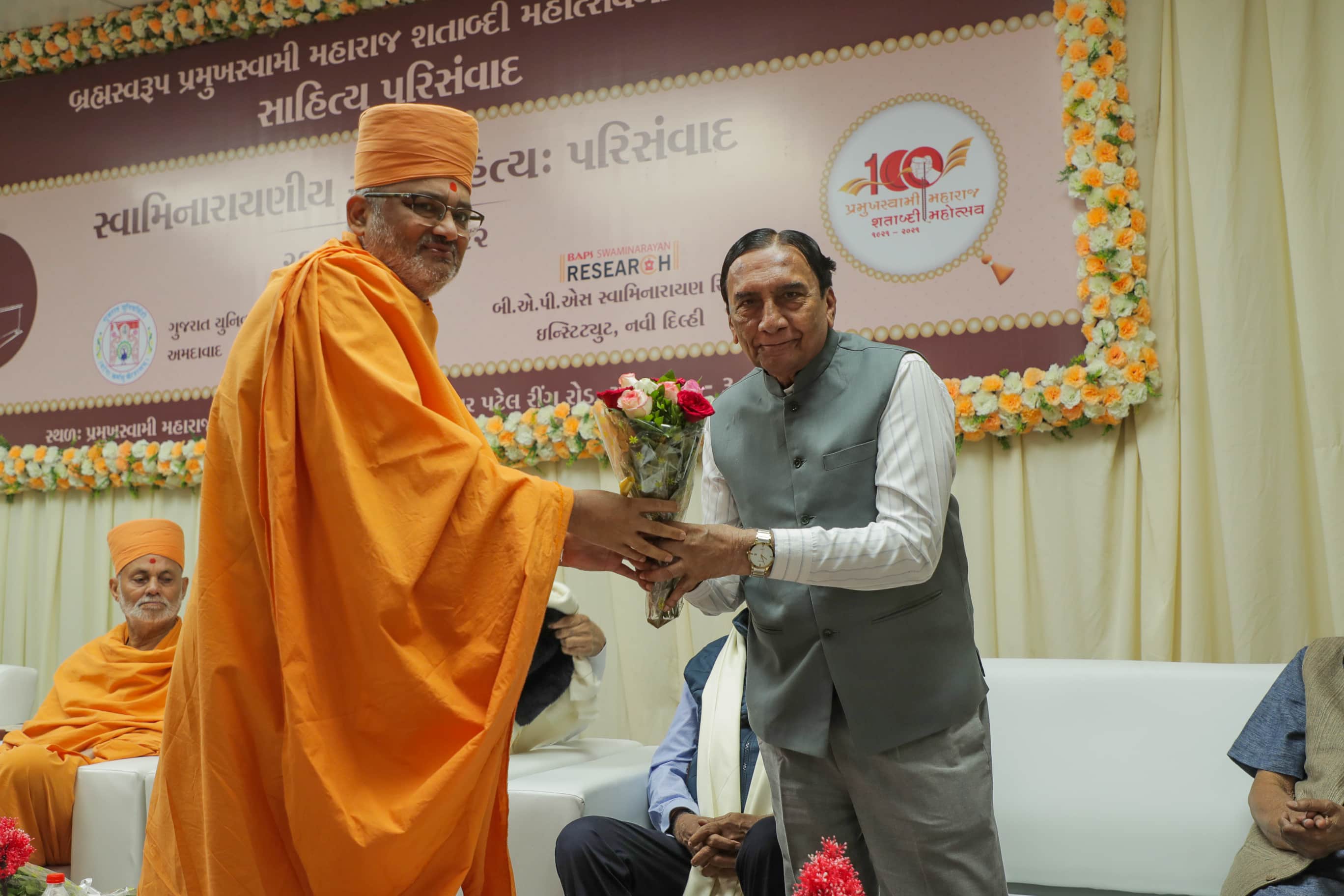 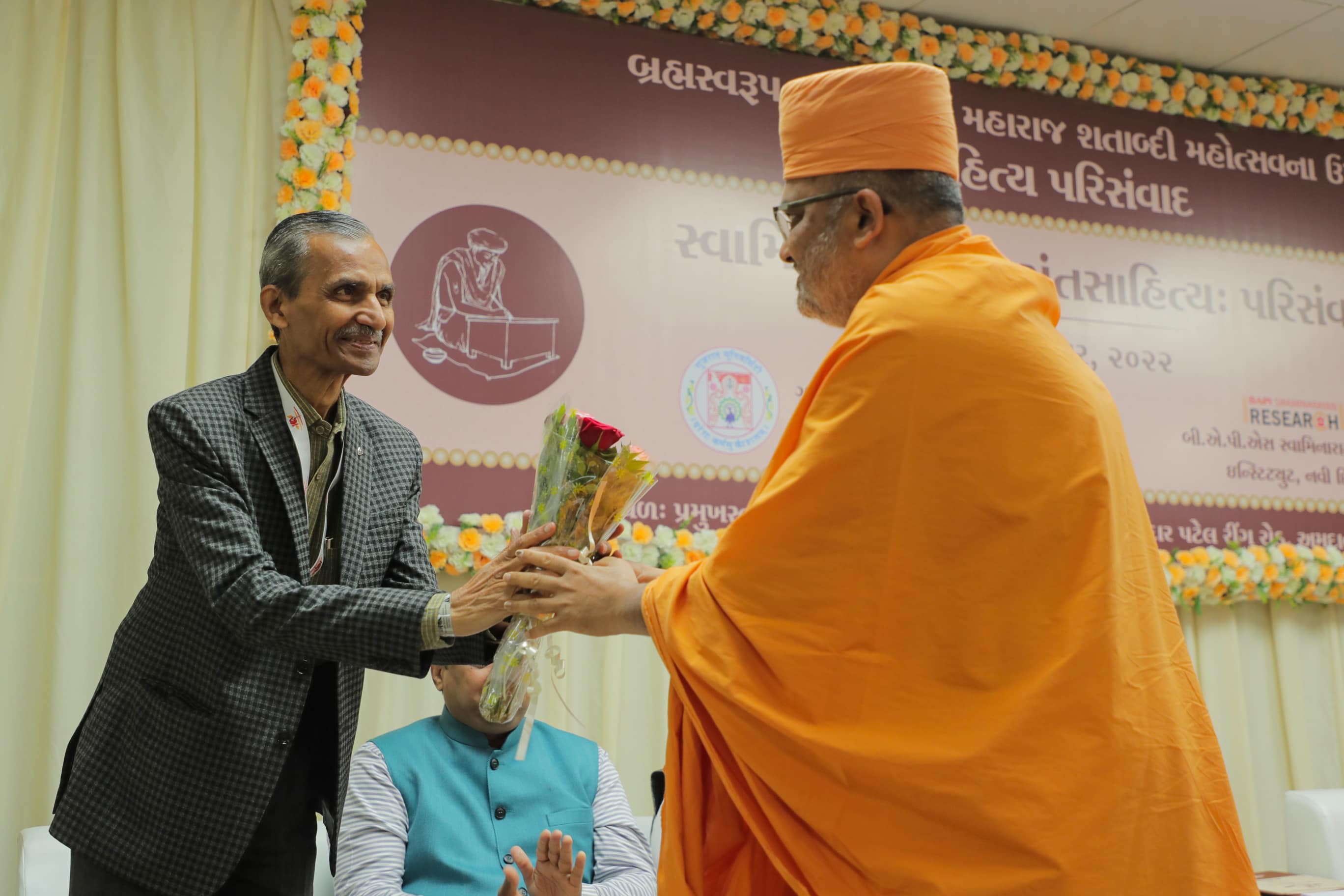 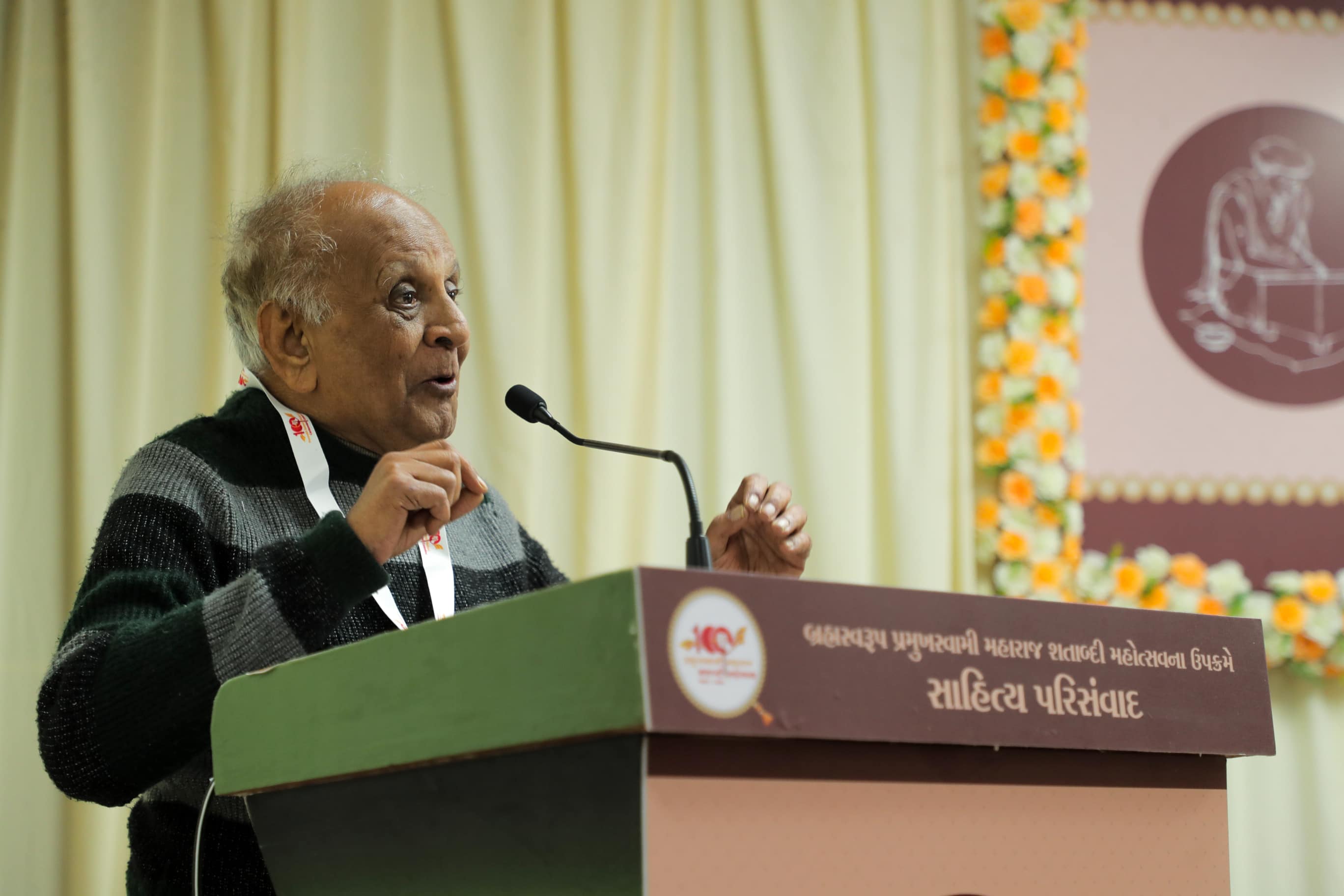 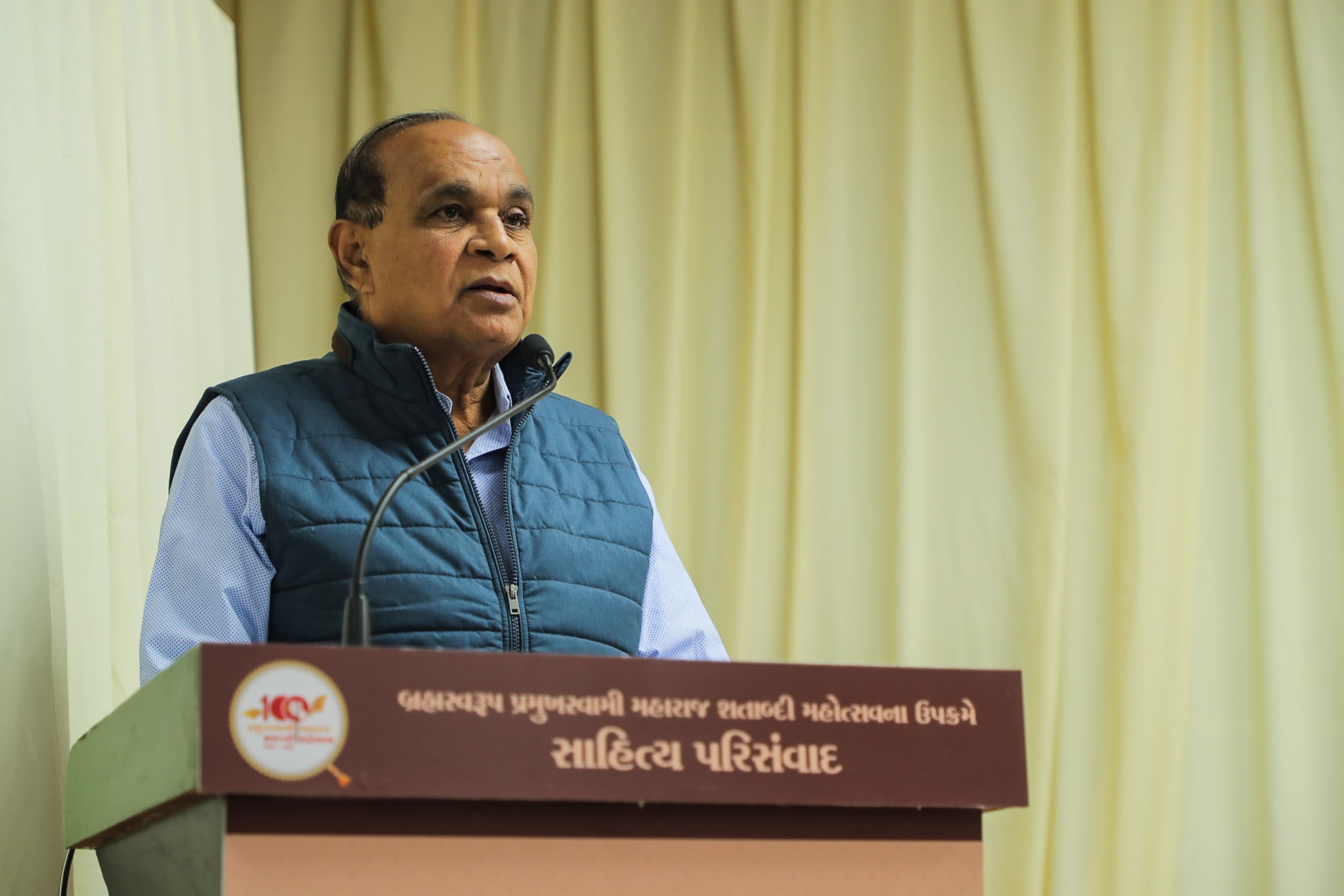 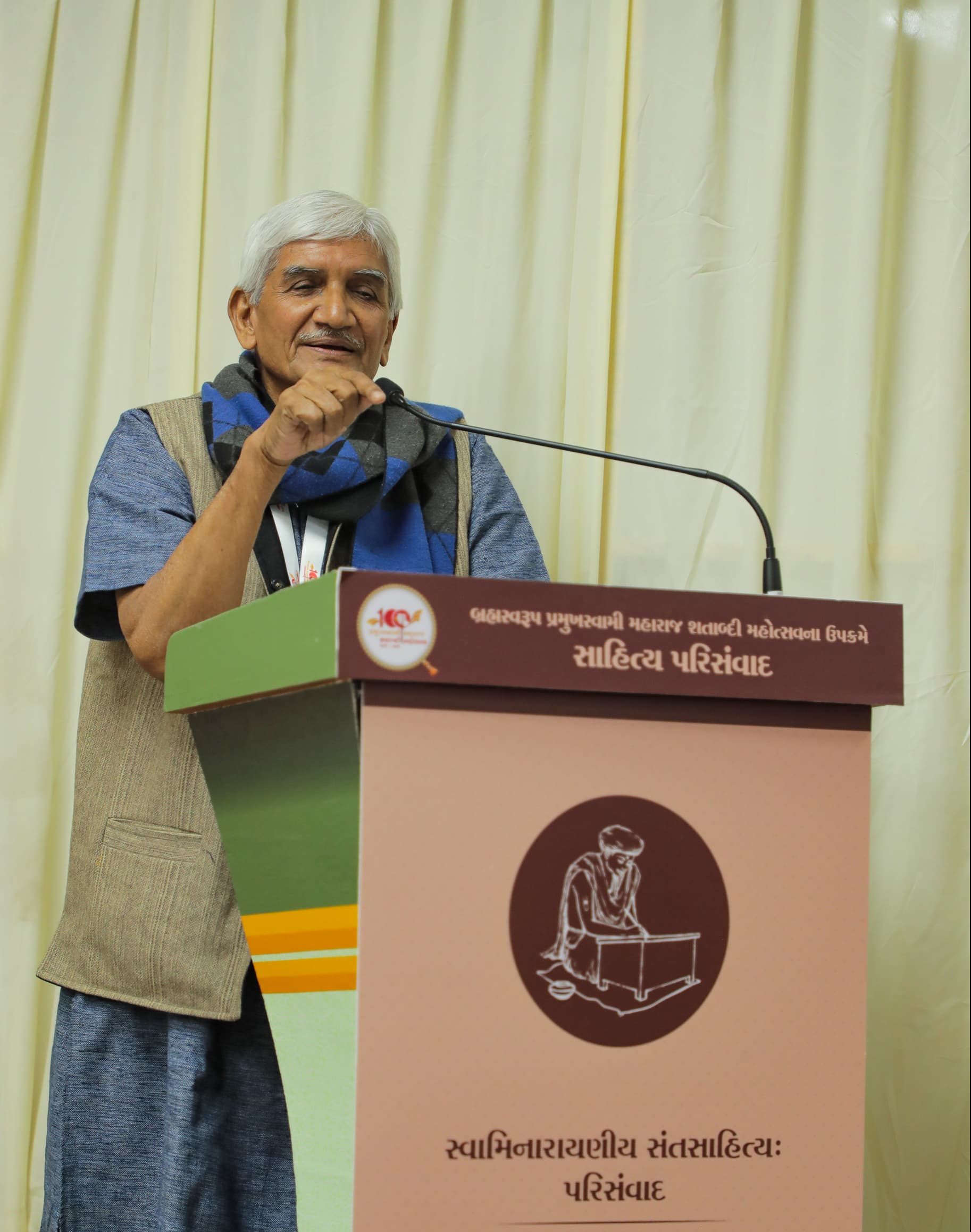 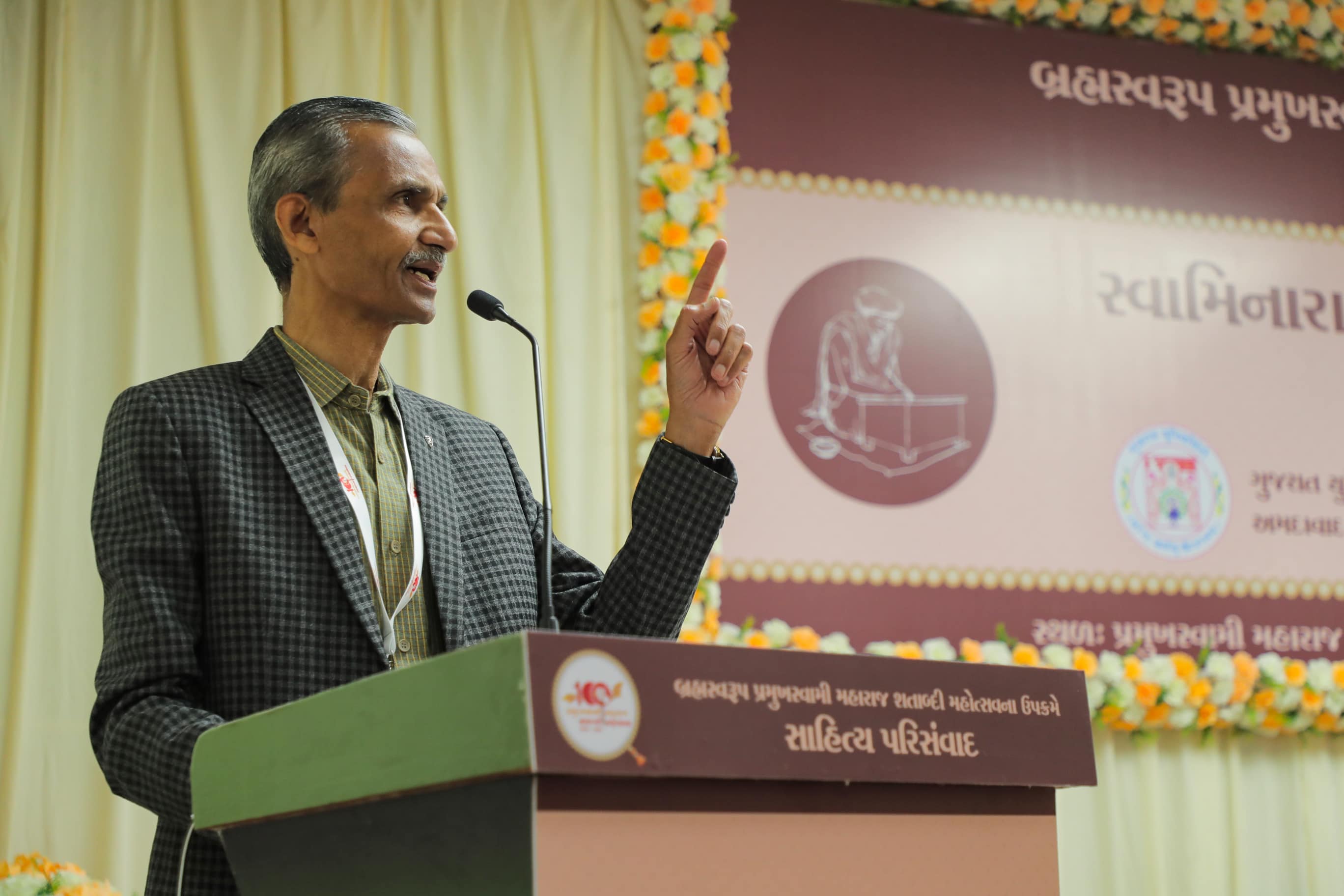 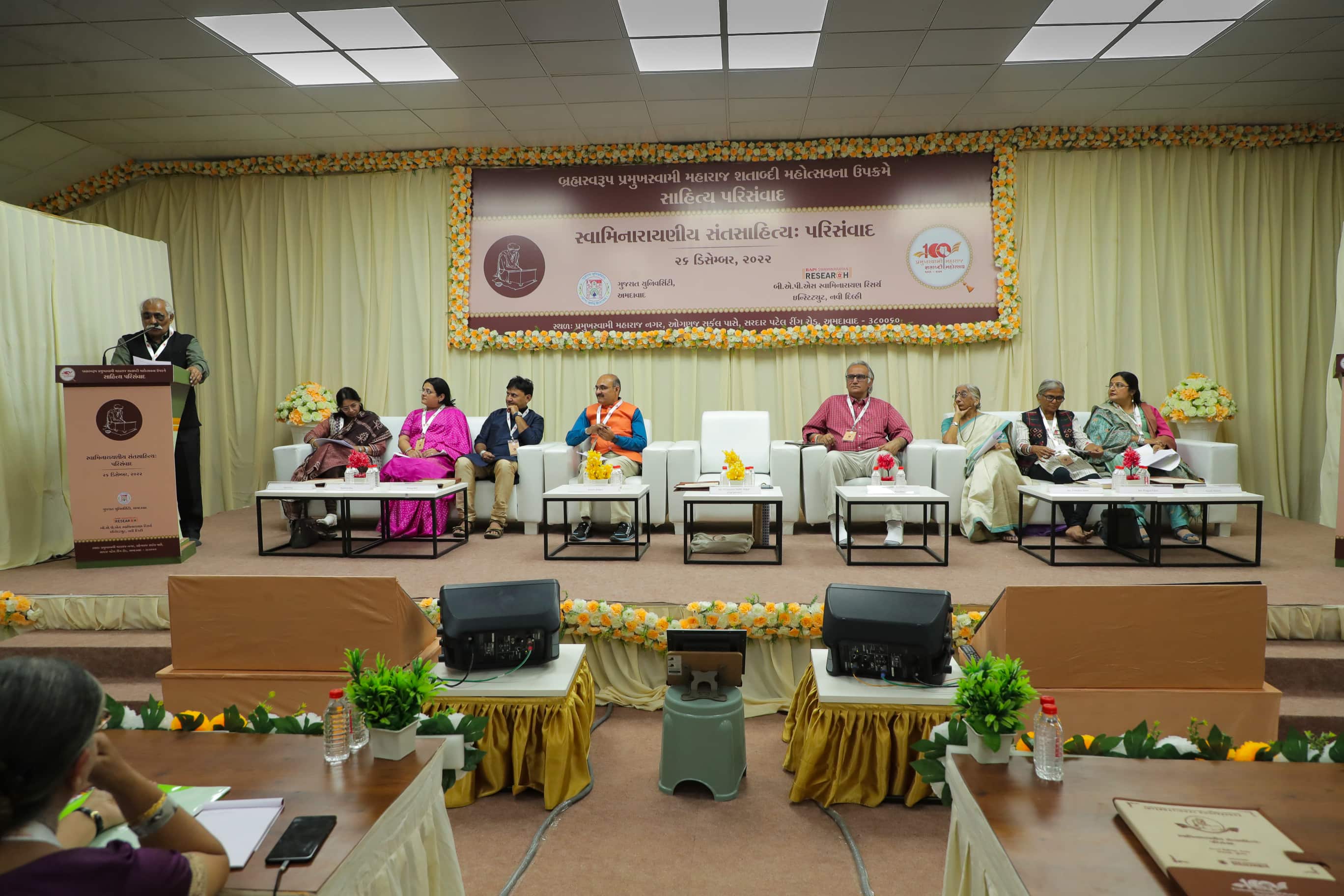 A Paper Presentation Session of the Conference 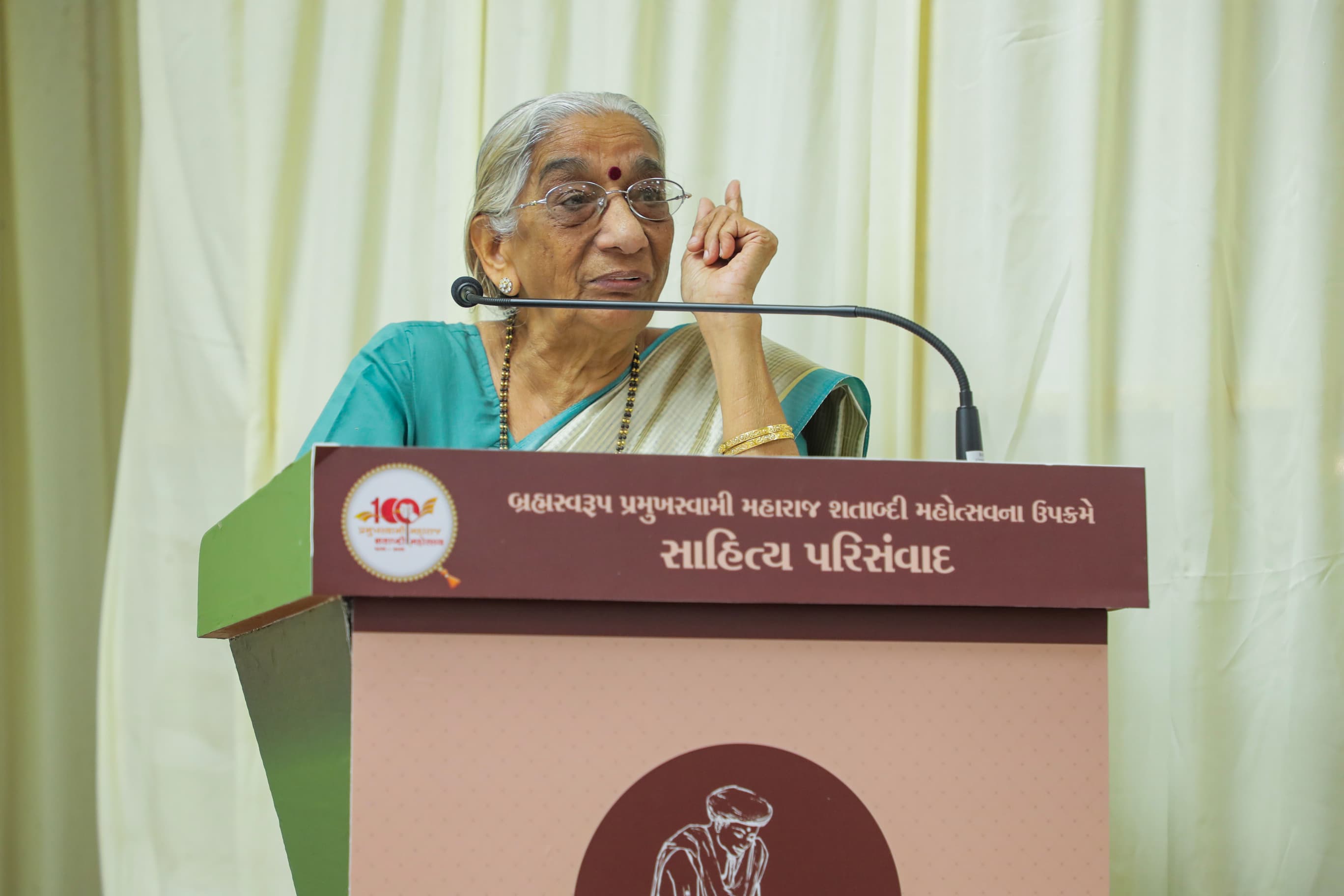 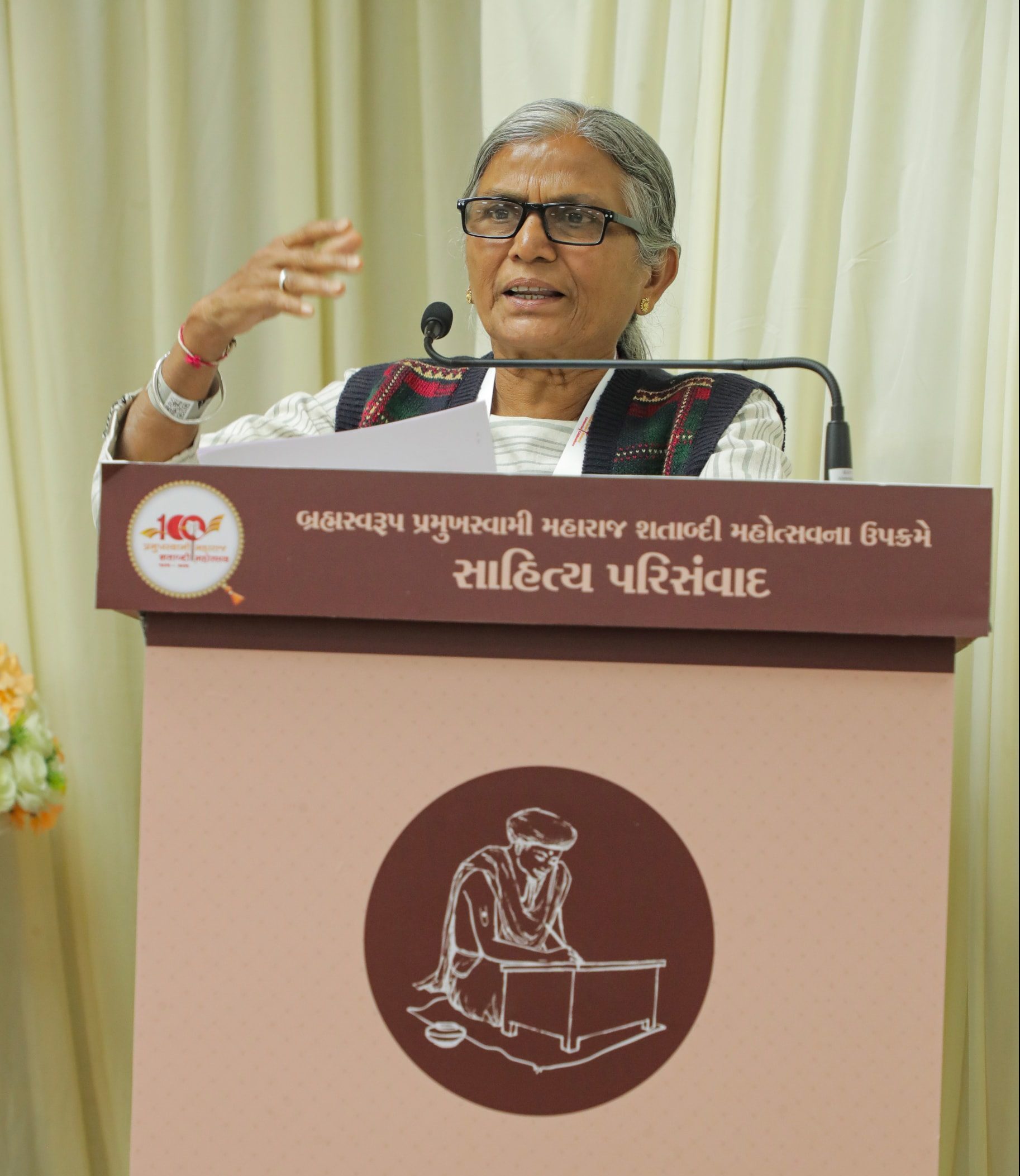 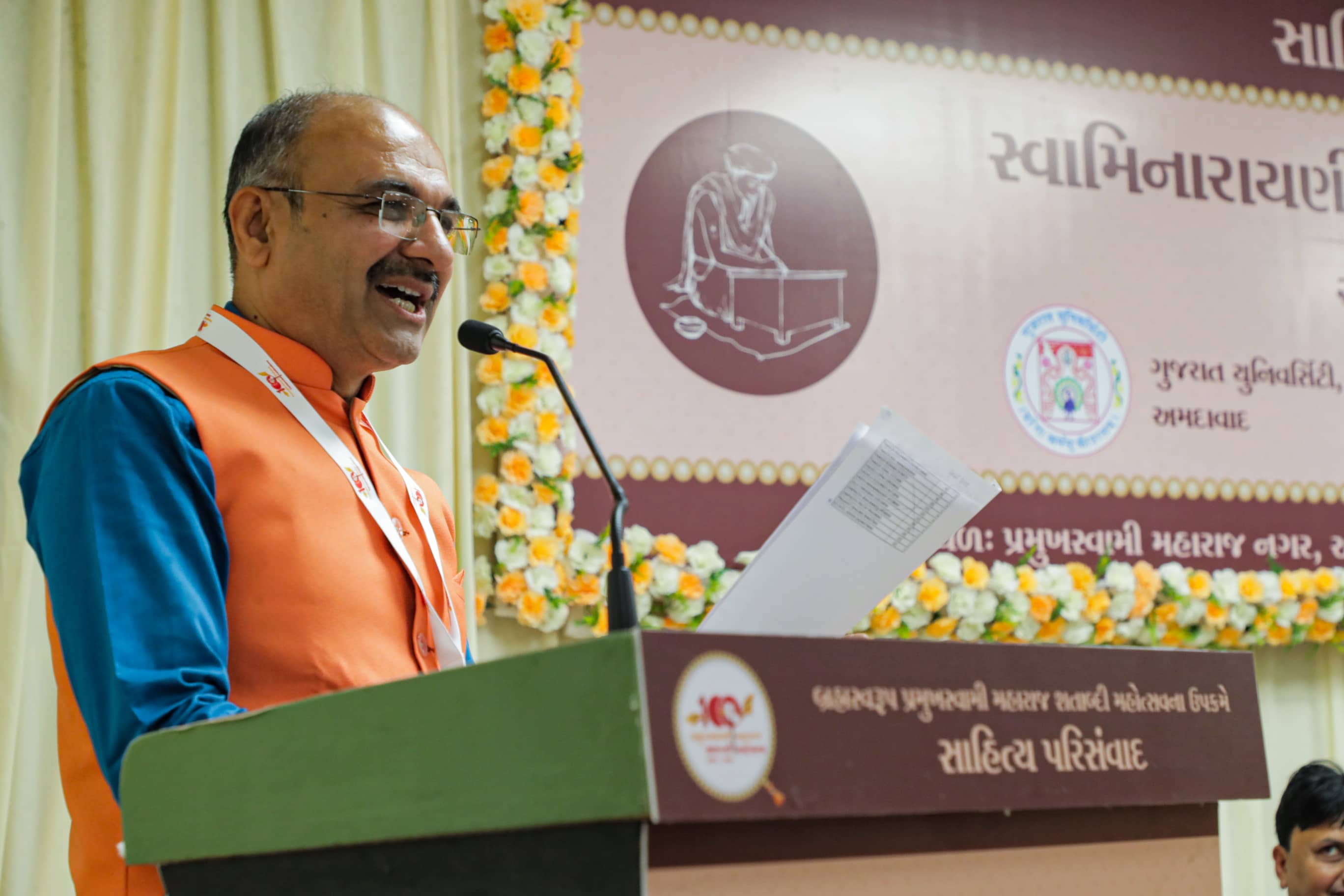 Shri Ashwin Andani, the HOD of Gujarati at DCM College, presenting during a Paper Presentation Session 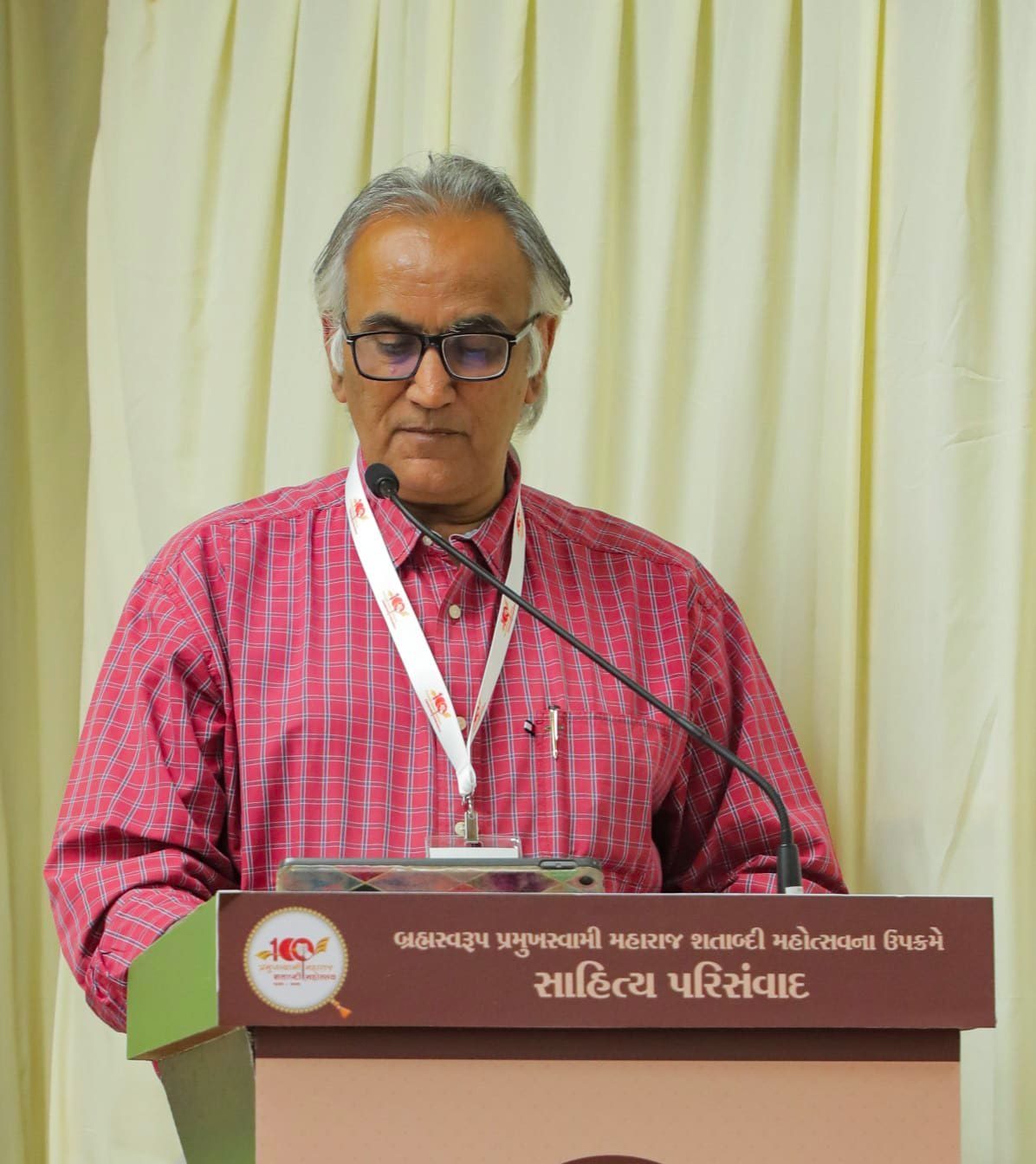