The 17th World Sanskrit Conference, the premier international forum for Sanskrit scholars, recognized Bhagwan Swaminarayan’s Akshar-Purushottam Darshan as the first new independent school of Vedanta since the 16th century. The recently authored ground-breaking Sanskrit works on the Akshar-Purushottam Darshan, the Swaminarayan-Bhashyam and the Swaminarayan-Siddhanta-Sudha by Sadhu Bhadreshdas of the BAPS Swaminarayan Sanstha, were also launched in the conference’s inaugural session on July 9, 2018 in Vancouver, Canada.

More than 600 eminent Sanskrit scholars and educators had gathered from over 40 countries for this historic event. The triennial World Sanskrit Conference, which for the last half-century has been bringing the finest minds in the world of Sanskrit together to advance understanding of Sanskrit language and literature, was held for the first time in Canada, at the University of British Columbia in Vancouver. World Sanskrit Conference organizing committee member and senior Sanskrit scholar from the University of British Columbia, Professor Ashok Aklujkar said, “Bhadreshdas Swami is one of the most amazing personalities of the religious traditions of India that I have ever met. His scholarly genius is jaw-dropping, and his commentaries on the Prasthantrayi are a truly great achievement. I think all of us at the World Sanskrit Conference are fortunate to have a bhashyakar in our midst. Just as the Kashi Vidvat Parishad acknowledged Swaminarayan Bhagwan’s Akshar-Purushottam Darshan as a distinct darshan in the Vedanta tradition, we are honored to do the same from the platform of the World Sanskrit Conference.”

Mahamahopadhyaya Bhadreshdas Swami, an eminent Sanskrit scholar and an ordained swami of the BAPS Swaminarayan Sanstha, completed the Swaminarayan-Bhashyam, a five-volume comprehensive Sanskrit commentary on Hinduism’s three Vedic canonical texts (Prasthanatrayi) – the Upanishads, Bhagavad Gita and Brahma Sutras – in 2007. These three texts form the foundation for the philosophical beliefs of Hindu Vedanta (commentarial) traditions. In 2017, Bhadreshdas Swami also completed the Swaminarayana-Siddhanta-Sudha, a classical Sanskrit dialectic treatise that offers an exposition, justification, and defense of the Akshar-Purushottam Darshan’s theological and philosophical principles.

The significance of Bhadreshdas Swami’s achievement was highlighted by Professor Deven Patel of the University of Pennsylvania. He said, “The World Sanskrit Conference is proud to honor this new and truly historic achievement in the world of Sanskrit philosophical culture. It is the first Sanskrit commentary on the Upanishads, the Brahma Sutras, and the Bhagavad Gita in nearly 200 years and the first commentary on the complete set by a single acharya in over 1200 years. This five-volume commentary, known as the Swaminarayan-Bhashyam, interprets the Prasthantrayi through the lens of Bhagwan Swaminarayan’s Akshar-Purushottam Darshan. We are fortunate to have present before us today, in Bhadreshdas Swami, the acharya who, in the tradition of Shankara, Ramanuja, Madhva, Nimbarka, Vallabha, and others, has composed these commentaries.”

World-renowned Sanskrit scholar from the University of Pennsylvania, Professor George Cardona aptly detailed the importance of the Bhadreshdas Swami’s work in establishing Akshar Purushottam Darshan saying, “This is a very important classical Sanskrit commentary that very clearly and effectively explains that Akshar is distinct from Purushottam.”

In the conference’s inaugural address, Bhadreshdas Swami explained the principles of the Akshar-Purushottam Darshan, the classical name of the distinct school of Vedanta. This darshan was revealed by Bhagwan Swaminarayan in the 19th century and propounded by His Holiness Shastriji Maharaj, the third spiritual successor of Bhagwan Swaminarayan and the founder of the BAPS Swaminarayan Sanstha. Bhadreshdas Swami further explained: “The essence of Akshar-Purushottam Darshan is to offer devotion to Purushottam, the supreme being, with loving servitude having qualitatively realized oneself as Akshar, who takes the form of the exemplary living guru.”

This was followed by the blessings of Ishwarcharandas Swami, the International Convener of the BAPS Swaminarayan Sanstha, who appreciated the great work of the World Sanskrit Conference and encouraged Sanskrit research and learning.

The World Sanskrit Conference’s inaugural session concluded with all the assembled scholars collectively recognizing Bhagwan Swaminarayan’s Akshar-Purushottam Darshan as a distinct school of philosophy in the Vedanta tradition. 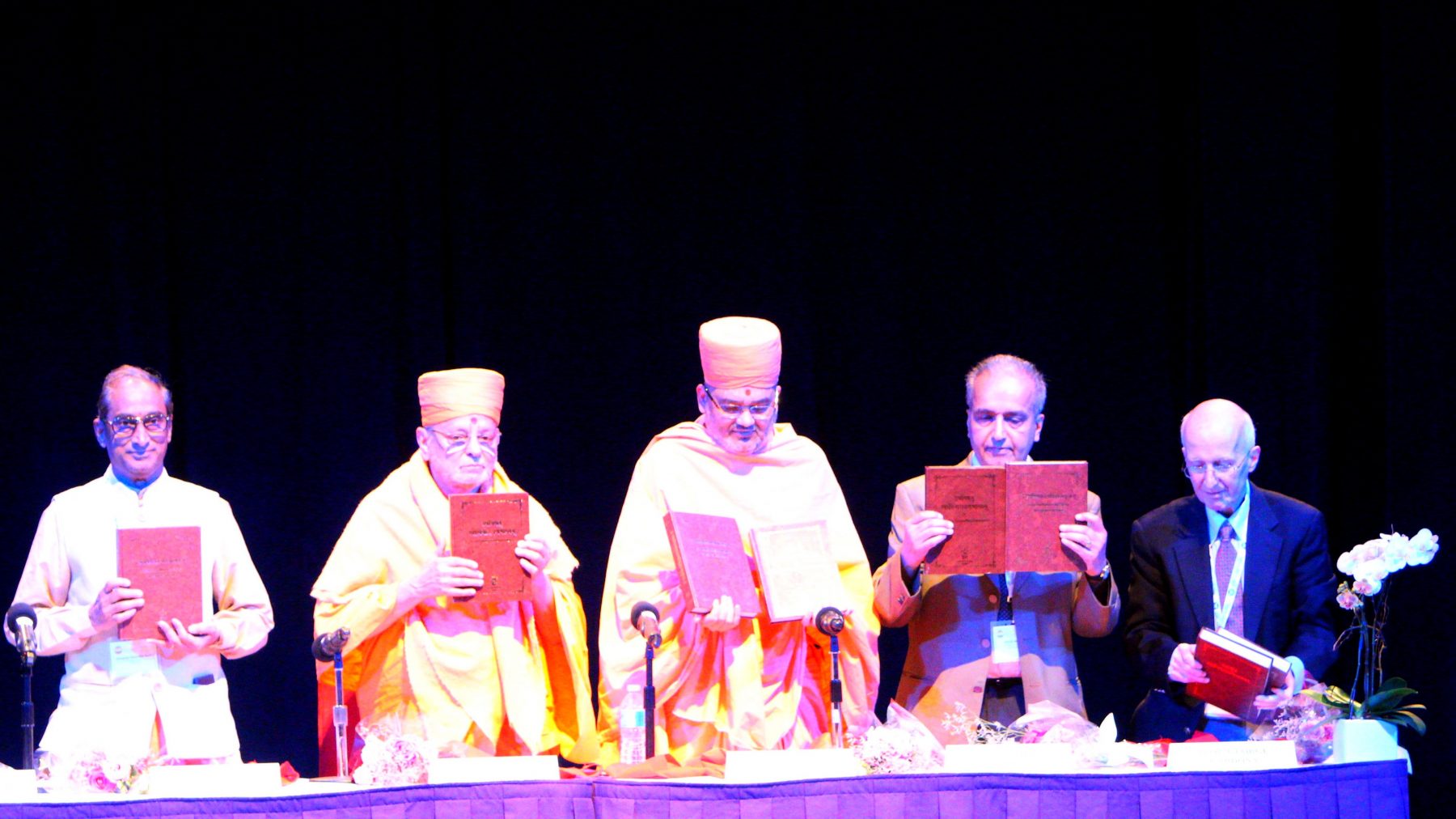 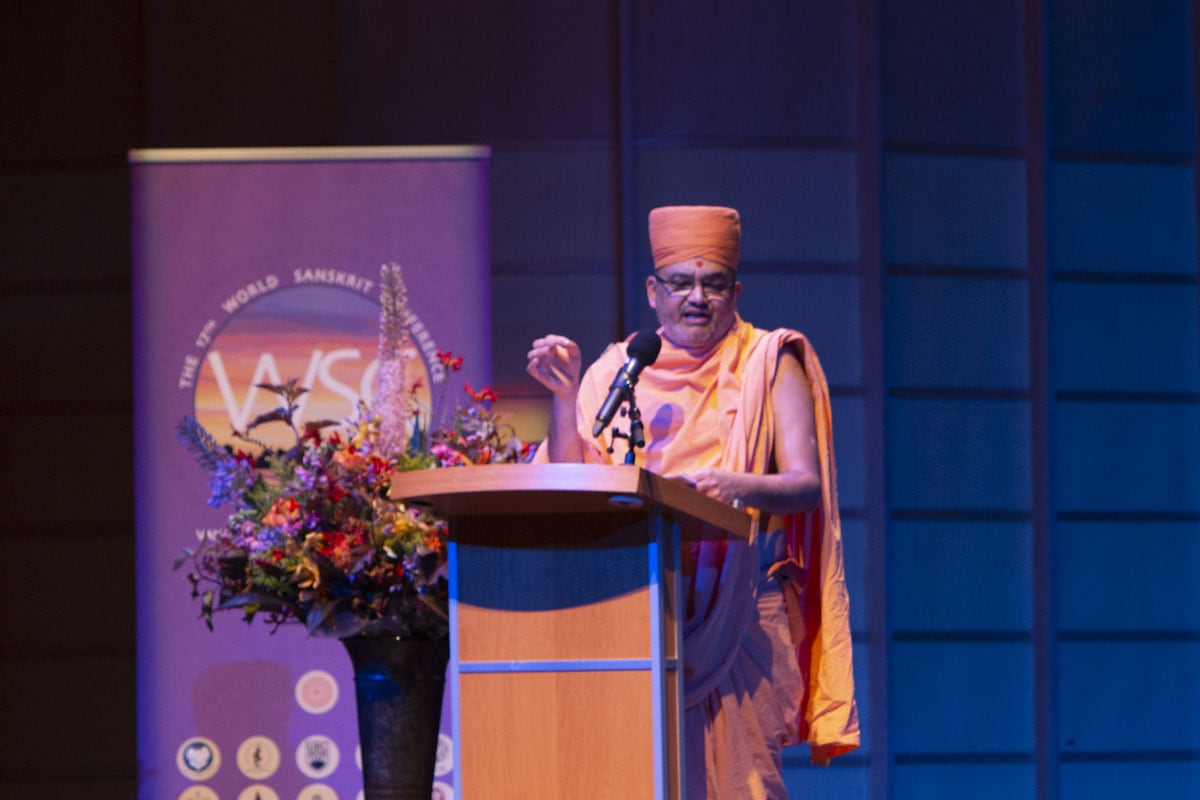 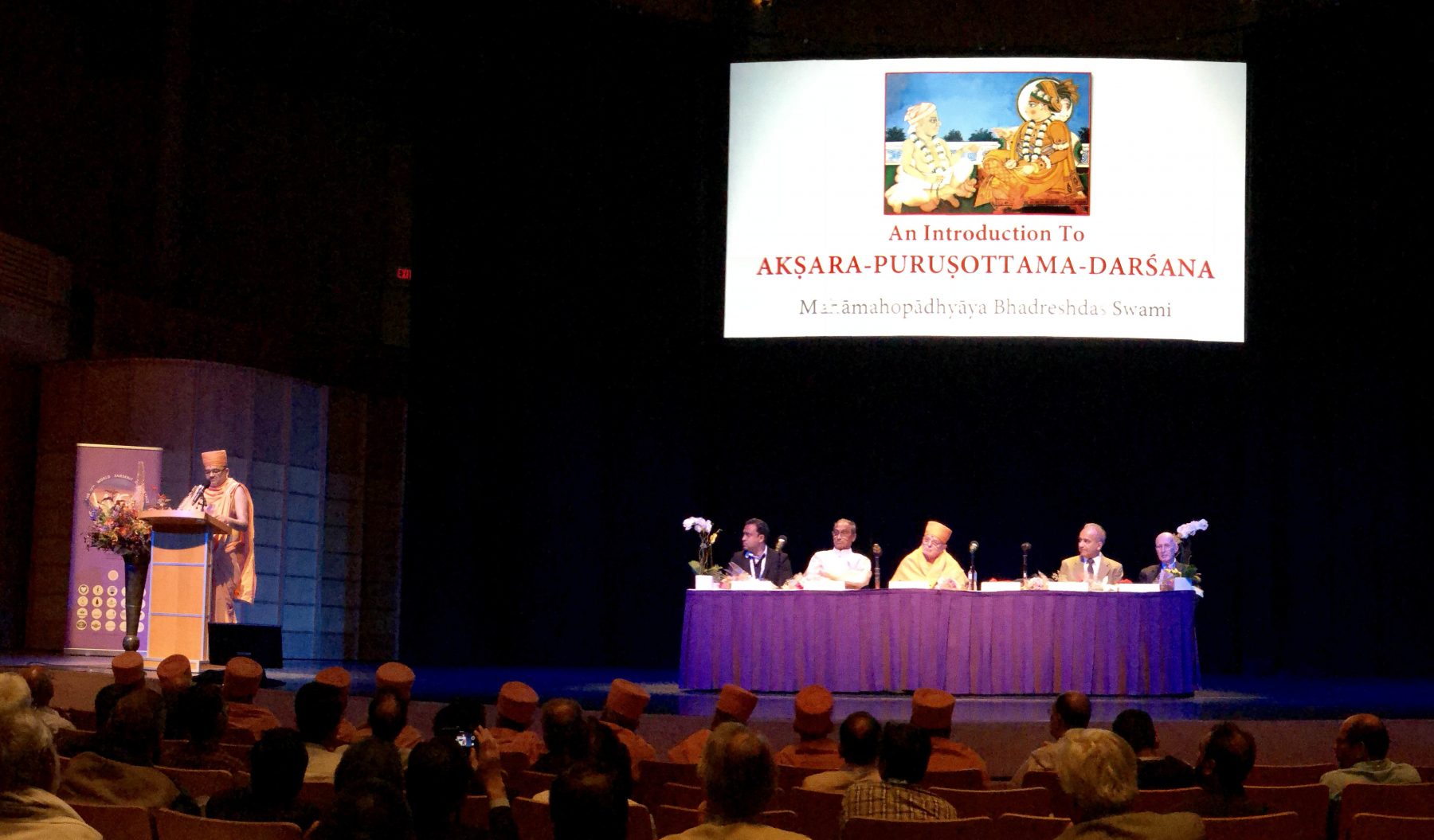 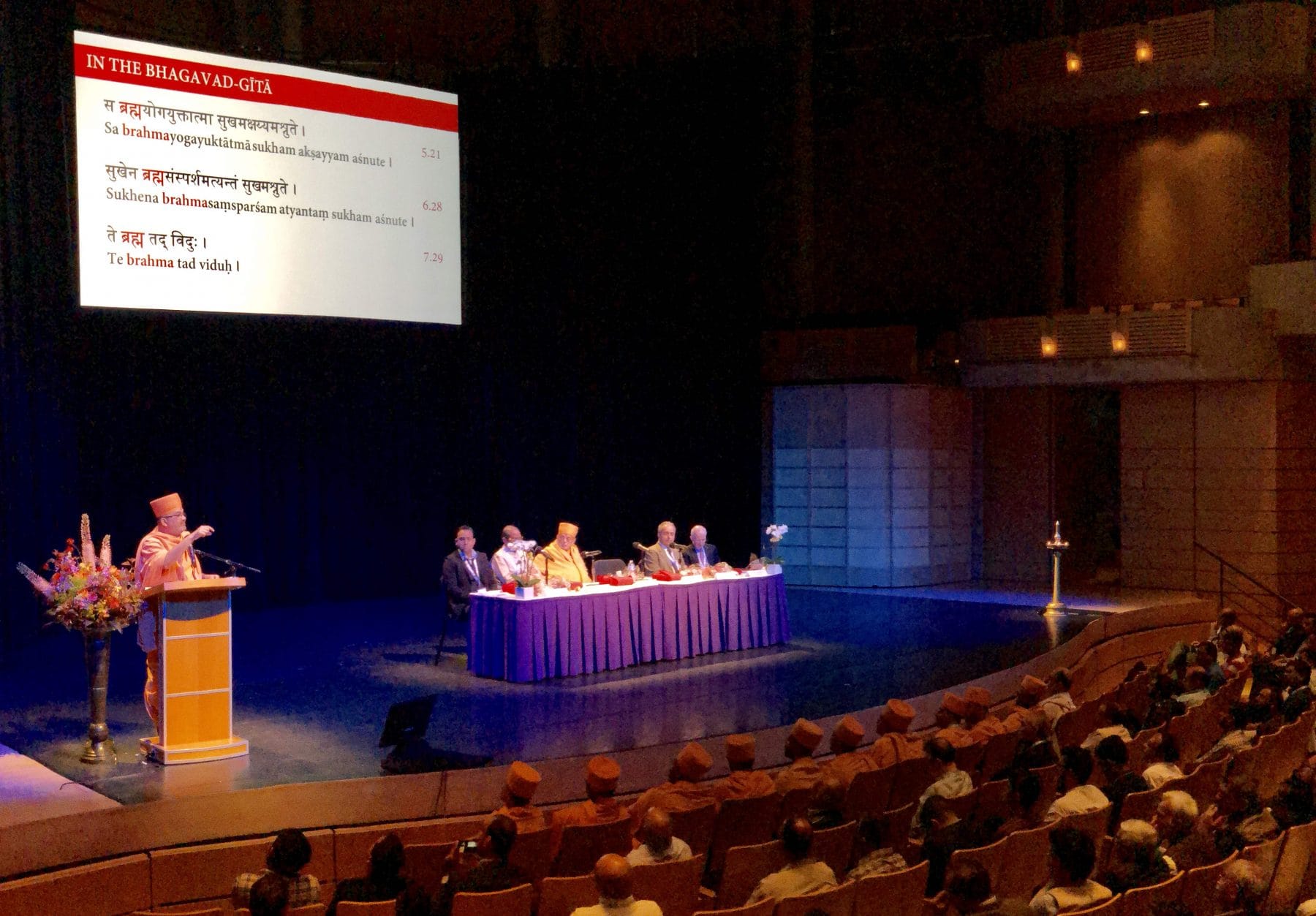 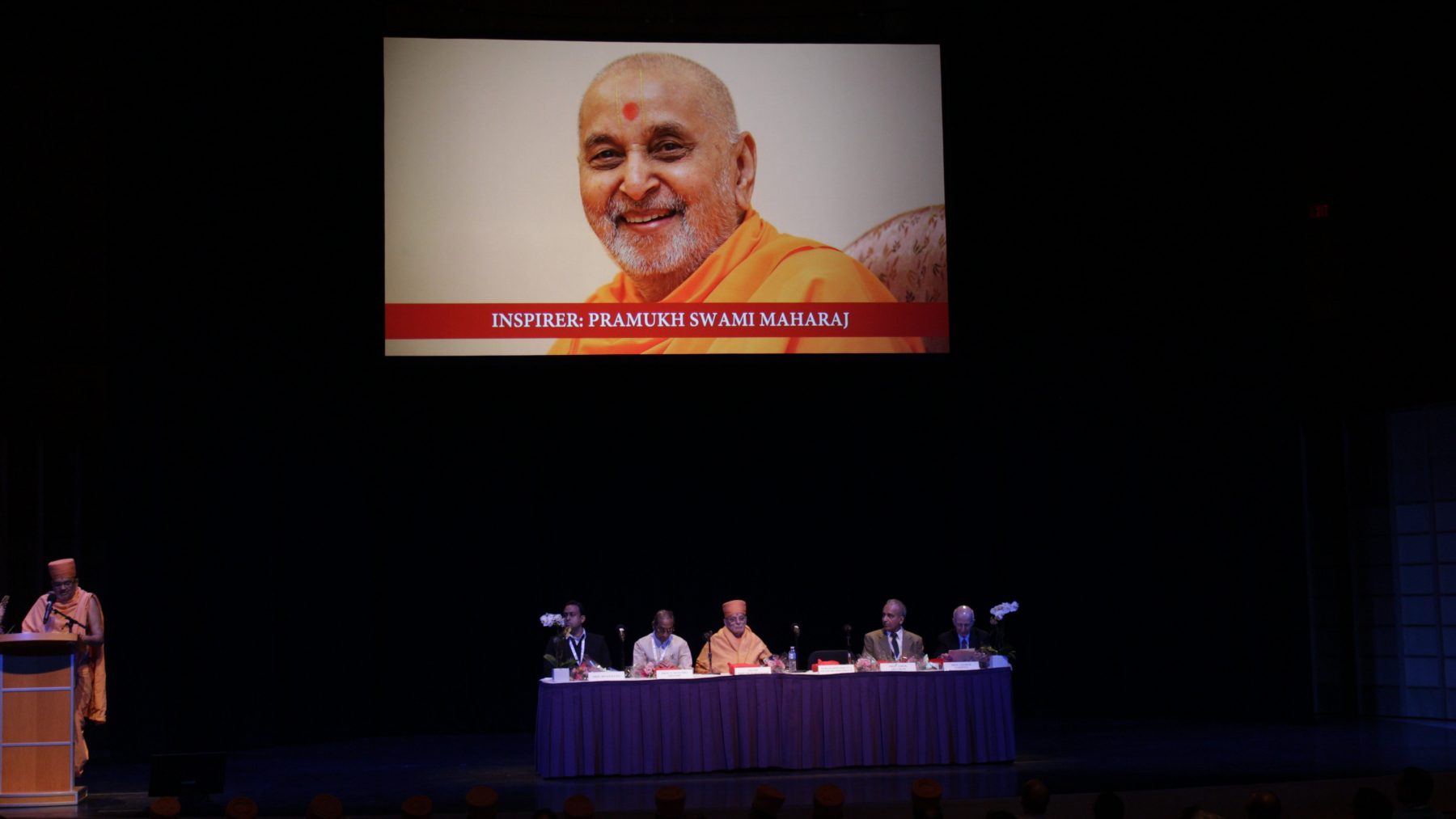 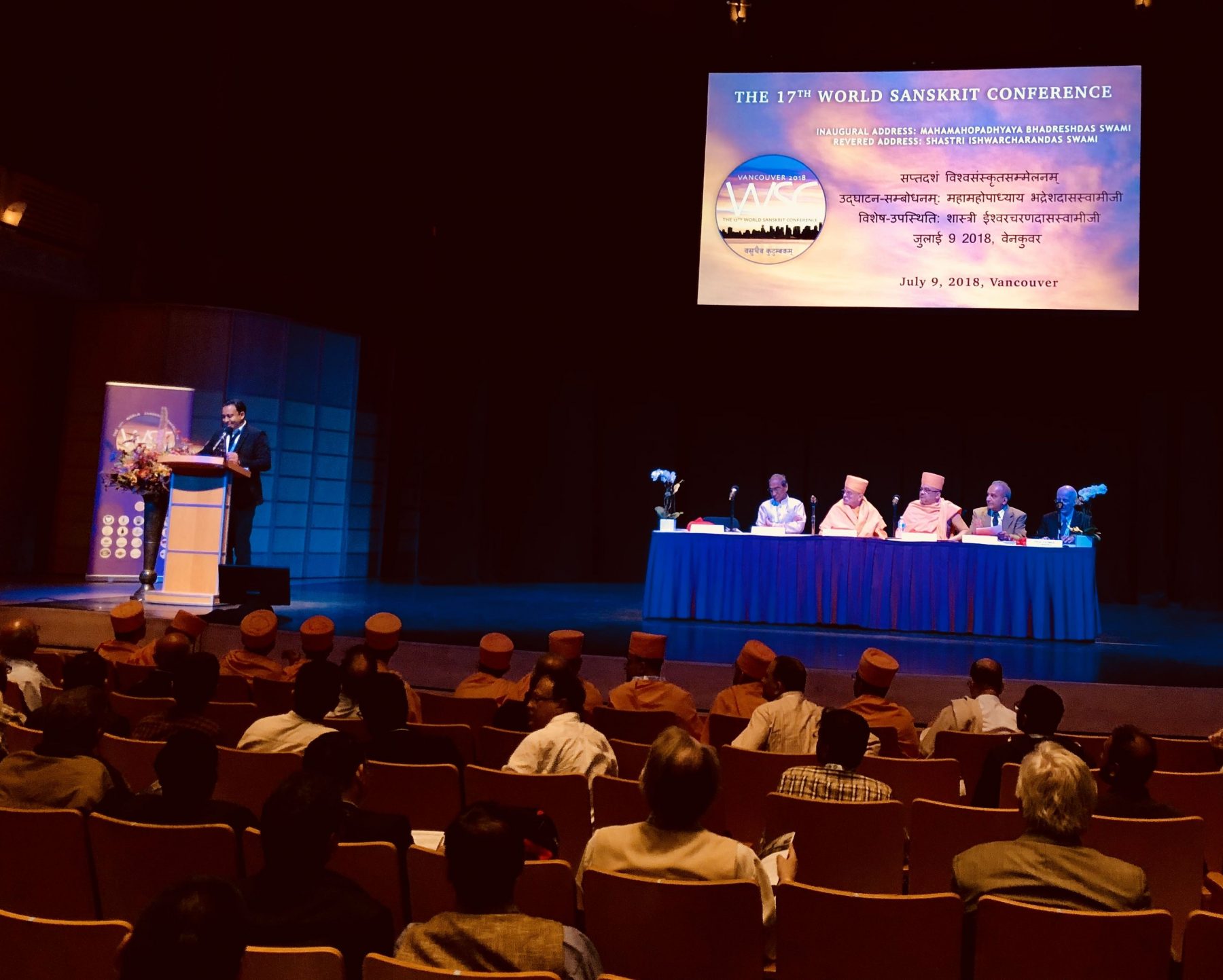