On 26 December 2021, the Indian Council of Philosophical Research (ICPR, Ministry of Education, Government of India) awarded Mahamahopadhyaya Bhadreshdas Swami with its prestigious ‘Lifetime Achievement Award’. Distinguished scholars and invited guests from around the nation participated in celebrating this momentous occasion.

The ICPR is positioned under the Ministry of Education, Government of India. It presented its most distinguished award to Mahamahopadhyaya Bhadreshdas Swami. By Pramukh Swami Maharaj’s wishes, Mahamahopadhyaya Bhadreshdas Swami authored comprehensive commentaries on the Prasthantrayi – the Upanishads, Brahmasutras, and the Bhagavad Gita, as well as a vadagranth according to the teachings of the Akshar-Purushottam Darshan as revealed by Bhagavan Swaminarayan. By authoring these works he has provided immense contributions to Darshanic literature. Within the last few centuries in the field of philosophy, he is the one bhasyakar who has authored both a commentary on the entire Prasthanatrayi and a vadagranth. In addition, he has visited numerous universities, research institutes, and educational centers throughout the world. By engaging in dialogues on Vedic darshanas with scholars at these institutions, he has provided novel contributions to darshanic thought. To recognize these achievements, the ICPR decided to honor him for his tremendous work. The award ceremony was held after a three-day conference organized by the BAPS Swaminarayan Research Institute, Akshardham, New Delhi and sponsored by the Indian Council of Philosophical Research on the topic: ‘Various Dimensions of the Akshar-Purushottam Darshan and Recent Trends in Advait Philosophy’.

The felicitation ceremony was headed by Prof. R.C. Sinha, chairman of the ICPR. Dr. Ram Madhav, the former national secretary of the BJP and a distinguished leader, author, and thinker, attended the event as its chief guest. In addition, Prof. Jatashankar Tivari, president of the All Indian Philosophy Association; Padma Shri Chamu Krishna Shastry, cofounder of Sanskritbharati, and trustee and secretary of the Sanskrit Promotion Foundation; Murlidhar Sharma, Vice Chancellor of the National Sanskrit University, Tirupati; Prof. Sacchidanand Mishra, member-secretary of the ICPR; Ramkishore Tripathi, a renowned traditional scholar from Varanasi; and over ten distinguished university scholars from throughout India, along with BAPS’s respected senior scholar and Saddarshan-acharya Shrutiprakashdas Swami, also graced the assembly with their presence.

On this occasion, Srinivas Varkhediji, Vice-Chancellor of the Kavikulguru Kalidas Sanskrit University, joined remotely to express his congratulations and good wishes to Bhadreshdas Swami. Shri Murlidhar Sharma commended the ICPR for selecting such an outstanding and worthy recipient of the ‘Lifetime Achievement Award’. Other scholars and acclaimed guests who attended in-person joined in celebrating Mahamahopadhyaya Bhadreshdas Swami’s exceptional scholarly aptitude and virtuous life.

At this event, Pujya Bhadreshdas Swami humbly bestowed all the tributes received at the feet of Bhagwan Sawminarayan and his gurus Pramukh Swami Maharaj and Mahant Swami Maharaj.

On this occasion, scholars endorsed the Vedic authenticity of the Akshar-Purushottam Darshan, expressed their profound admiration and reverence regarding Mahamahopadhyaya Bhadreshdas Swami’s scholarly intellect, and shared their heartfelt experiences of BAPS’s work and Pramukh Swami Maharaj’s divinity. During the ceremony, Vice Chancellor of the National Sanskrit University in Tirupati, Shri Muralidhar Sharma, expressed his gratitude towards ICPR, “I thank the Indian Council of Philosophical Research for selecting an appropriate scholar to receive the Lifetime Achievement Award.” Showing his respect for Bhadreshdas Swami, he further stated, “Within society, there are many scholars who chase awards and accolades but Bhadreshdas Swami, who has surrendered his life for a spiritual tradition, is a scholar who is chased by awards. Today, I believe that the Lifetime Achievement Award has become fortunate upon being bestowed to such a great personality.” Thereafter, the Vice Chancellor conveyed his sentiments regarding the Prasthantrayi Swaminarayan Bhashya and affirmed the Vedic authenticity of the Akshar-Purushottam Darshan saying, “Authoring a lucid and scholarly commentary on the Prasthantrayi is not an ordinary feat. This commentary does not criticize anyone. Pujya Bhadreshdas Swami is a living bhasyakar. Accepting our invitation, Pujya Bhadreshdas Swami came to Tirupati and engaged in a discussion with more than 35 prominent scholars for many days. As a result, all the scholars unanimously accepted that the Akshar-Purushottam Darshan is truly a unique Vedic Darshan.”

On this occasion, Professor Shrinivas Varkhediji, Vice Chancellor of Kavikulaguru Kalidas Sanskrit University, Nagpur, addressed the assembly through a video message. He said, “We’re honoring a scholar, and a bhasyakar (commentator). With the formation of the Swaminarayan Bhashya on the Prasthantrayi, Pujya Bhadreshdas Swami has presented the Akshar-Purushottam Darshan in an academic manner. He has presented this unique darshan to the academic world. It is an original doctrine based on Vedic scriptures. This darshan has now received national acclamation through this Lifetime Achievement Award.”

Professor Jatashankar Tivariji, Chairman of the All India Philosophy Association, explained the significance of today’s event. “After hundreds of years, someone has written a Bhashya on the Prasthantrayi. Now joining a long tradition of Bhashya commentators, Pujya Bhadreshdas Swami has provided a treasured contribution to that very tradition. It is unfathomable to understand how much effort he must have spent in creating this Bhashya, considering that an entire life can be spent merely studying a portion of such a text.” Acknowledging the unique facets of the Akshar-Purushottam Darshan, he said, “After three days of discussions, it is clear that the Akshar-Purushottam Darshan is worthy of admiration from other scholars.”

Expressing his sentiments, Padma Shri Chamu Krishna Shastry, Co-Founder of the Sanskrit Bharati Association and Chairman of the Provincial Language Conservation Committee, said, “By granting this award to Pujya Bhadreshdas Swami, the ICPR has elevated its own prestige. The award’s prestige has been elevated. It is our great privilege to receive his guidance and be present in such a time.”

Informing the audience of the purpose of giving this award, the ICPR member-secretary, Prof. Sacchidanand Mishra said, “The purpose of this award is to present a role model to the world.” Thereafter, he proceeded to read out the words of the citation presenting the award: “It is a privilege for the Indian Council of Philosophical Research and fraternity of Philosophy as a whole to honor you with this lifetime achievement award… your lifetime achievements in the field of philosophy require no accolades for recognition, but this is a humble effort on part of the ICPR to honor your lifelong selfless services to enrich Indian philosophy… the ICPR takes pride in presenting the Lifetime Achievement Award to the living Bhasyakar Mahacharya of our time.”

After the reading, chairman of the ICPR, Prof. R.C. Sinha and the member-secretary, Prof. Sacchidanand Mishra presented the award to Mahamahopadhyaya Pujya Bhadreshdas Swami who immediately offered the award to Akshar-Purushottam Maharaj. The audience demonstrated their delight for this historic moment with a long standing ovation.

This event’s chief guest, Dr. Ram Madhav, an acclaimed politician, writer and philosopher, praised Mahamahopadhyaya Bhadreshdas Swami by saying, “Puyja Bhadreshdas Swami is an unparalleled scholar.” He also commended the Swaminarayan Sampradaya by saying, “The Swaminarayan Sampradaya has played a pivotal role in spreading our country’s glorious culture, legacy and generosity to the masses. This sampradaya is a renowned bhakti sampradaya, through which our country’s religious legacy continues to flourish. Today, when the progression of scientific knowledge requires the addition of spiritual knowledge, Bhadreshdas Swami has significantly contributed to its progress.”

The chairman of ICPR as well as this event, Professor R.C. Sinhaji said, “The Indian Council of Philosophical Research (ICPR) and the All India Philosophy Association (Akhil Bharatiya Darshanik Parishad) has always been graced with the blessings of sadhus. For a sadhu, an award such as this is of no importance, but more so the ICPR has been honored by being given a chance to present this award thereby increasing the organization’s value. Seeing this assembly, I feel that ICPR has been blessed.”

On this occasion, the renowned Sanskrit journal, ‘Vyas-shrihi’, published a special issue dedicated to the Akshar-Purushottam Darshan. The chief-editor of this issue, Shri Buddheshwar Sarangiji said, “Vyasashri is a biannual publication dedicated to the promotion of Sanskrit and culture. It is ISSN marked and care-listed by the UGC. Each edition is dedicated to a scholar featured on its cover, with the aim to educate future generations about their unique contribution. While we wished to continue this tradition with a cover-photo of Pujya Bhadreshdas Swami, he politely declined and insisted that the issue be dedicated to Bhagwan Swaminarayan and Guru Pramukh Swami Maharaj.  Of Vyasashri’s 19 issues published so far, this would be the first to not feature a scholar on its cover – a testament to Bhadreshdas Swami’s humility. The depth of the research papers published in this special Akshar-Purushottam Darshan issue command a month’s worth of discussion and impetus for a new thesis.”

At this event, the BAPS Swaminarayan Research Institute took the opportunity to present respected Kashi scholar, Prof. Ramkishor Tripathiji, with the title of ‘Vedant Martand’. Commending Prof. Tripathiji’s scholarly achievements, Bhadreshdas Swami said, “Scholars have no desire to be honored, but their knowledge itself attracts such honor. Prof. Ramkishor Tripathi is a great scholar and can be regarded as a personification of Vedantic knowledge. He teaches over nine Vedant Darshans. On the occasion of Pramukh Swami Maharaj’s centenary celebrations, the BAPS Swaminarayan Research Institute is pleased to recognize and honor the respected professor as a ‘Vedant Martand’. 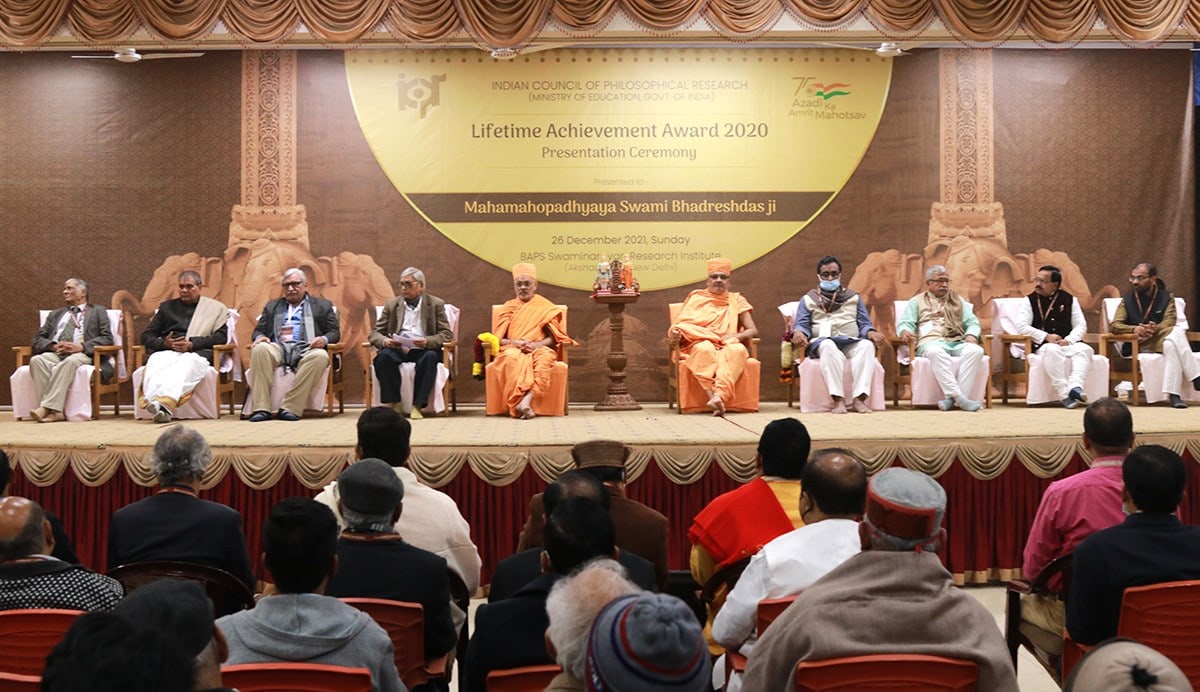 Stage guests during the valedictory session 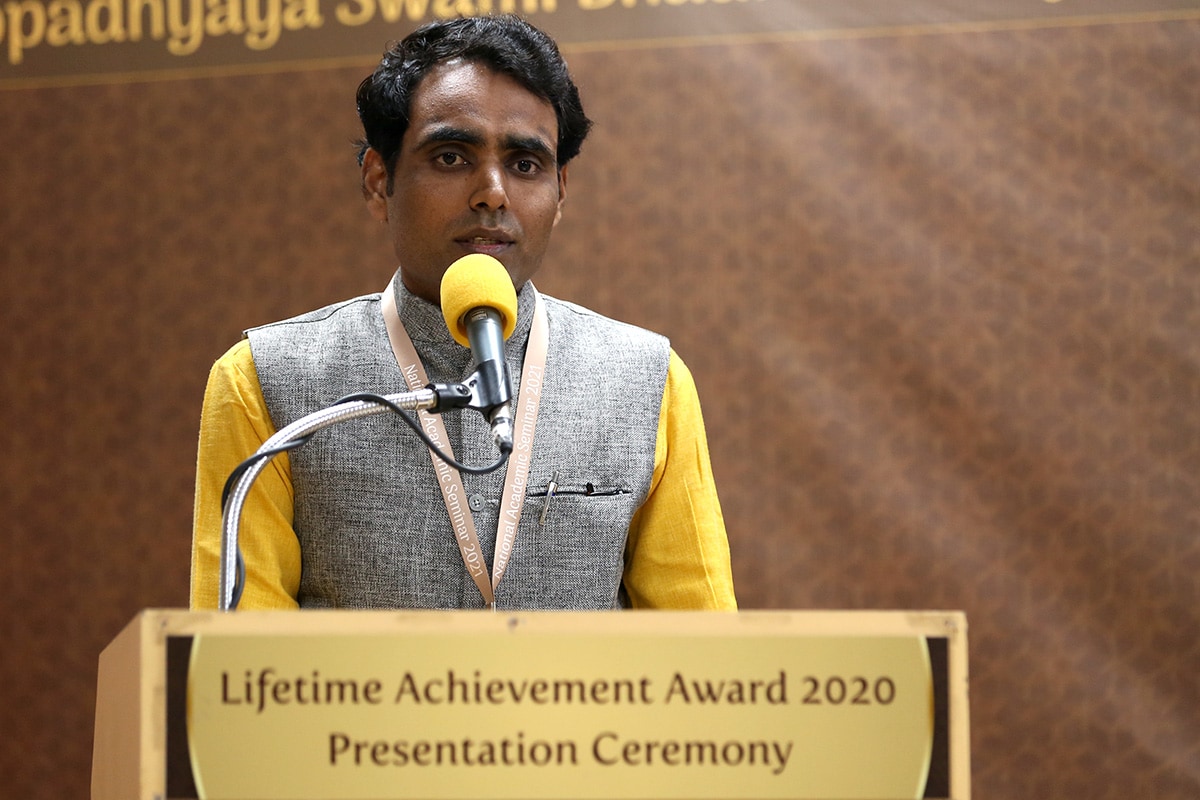 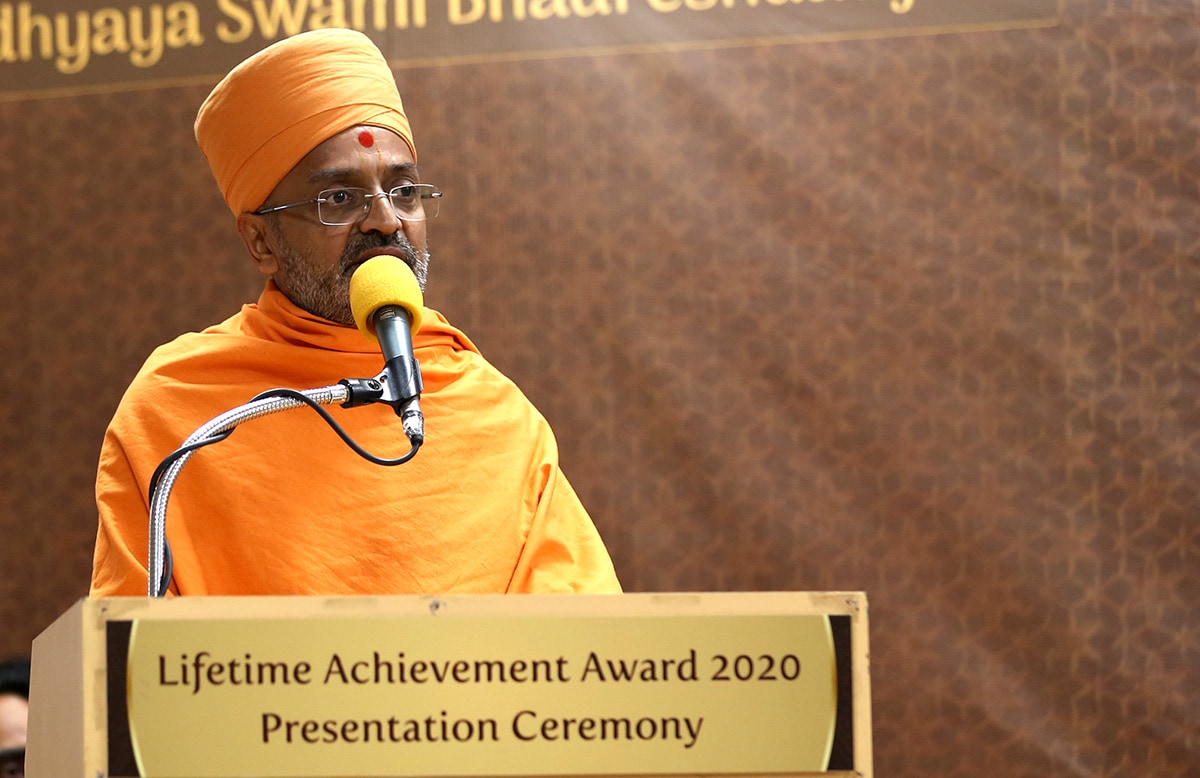 Munivatsaldas Swami welcomes the stage guests of the assembly 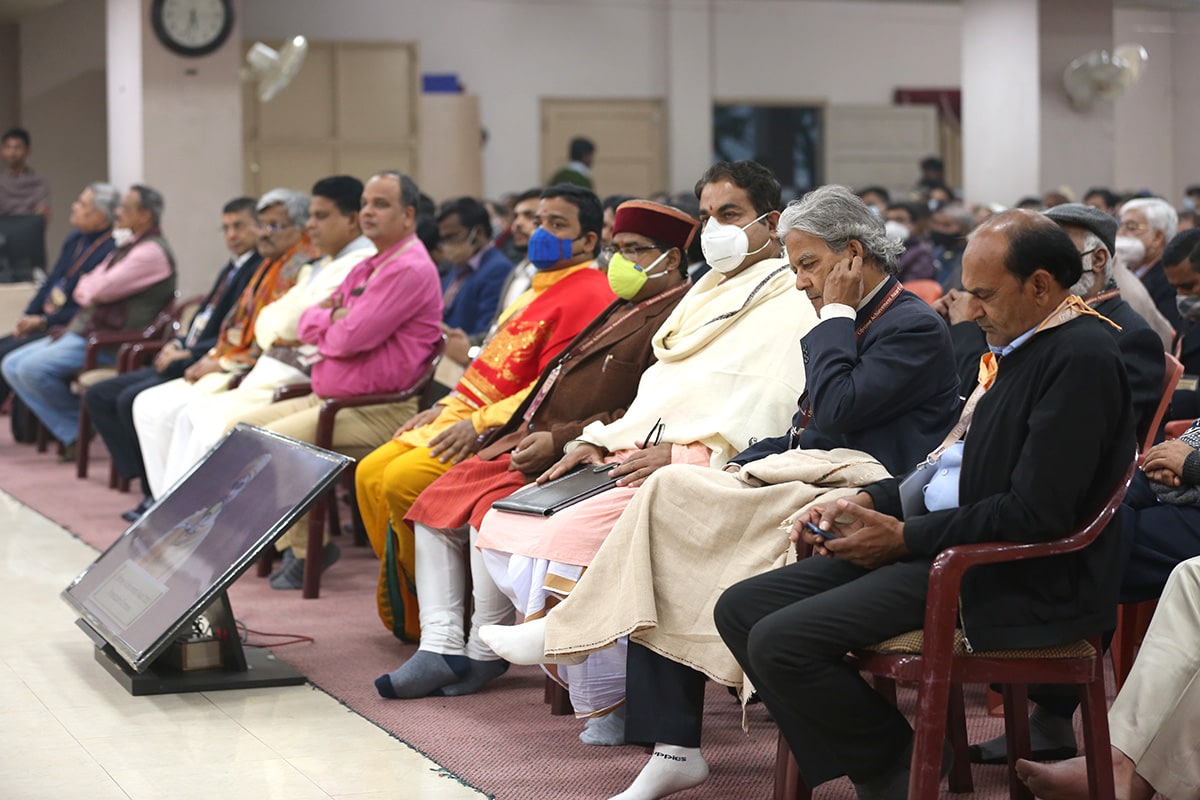 Scholars during the valedictory session 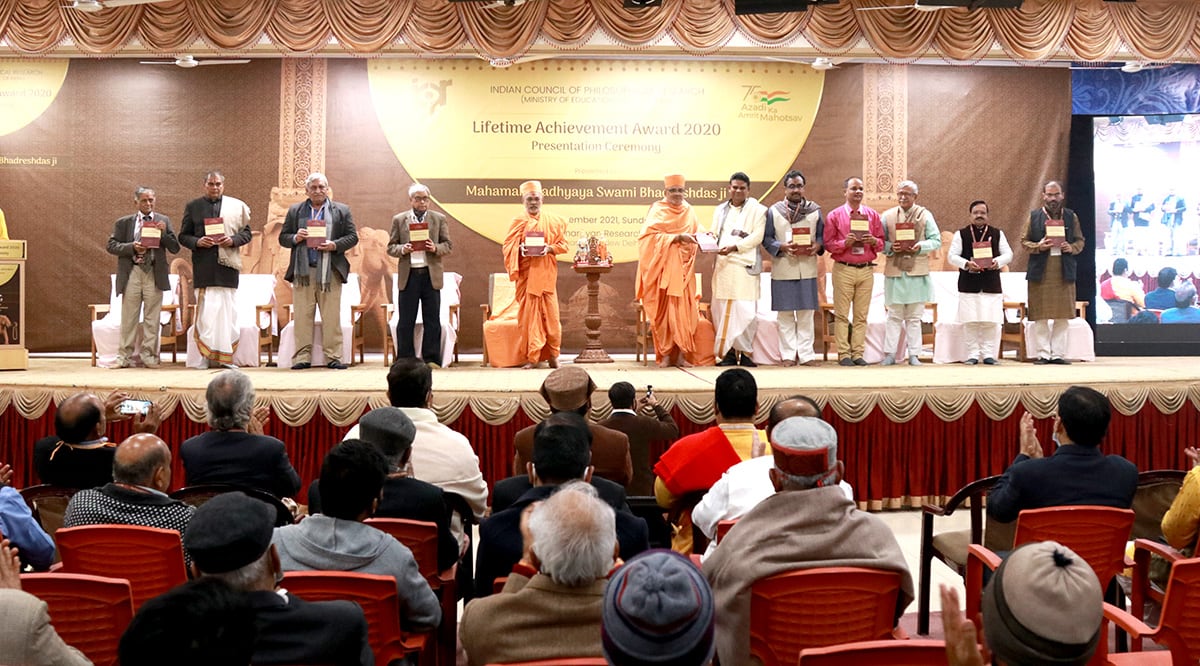 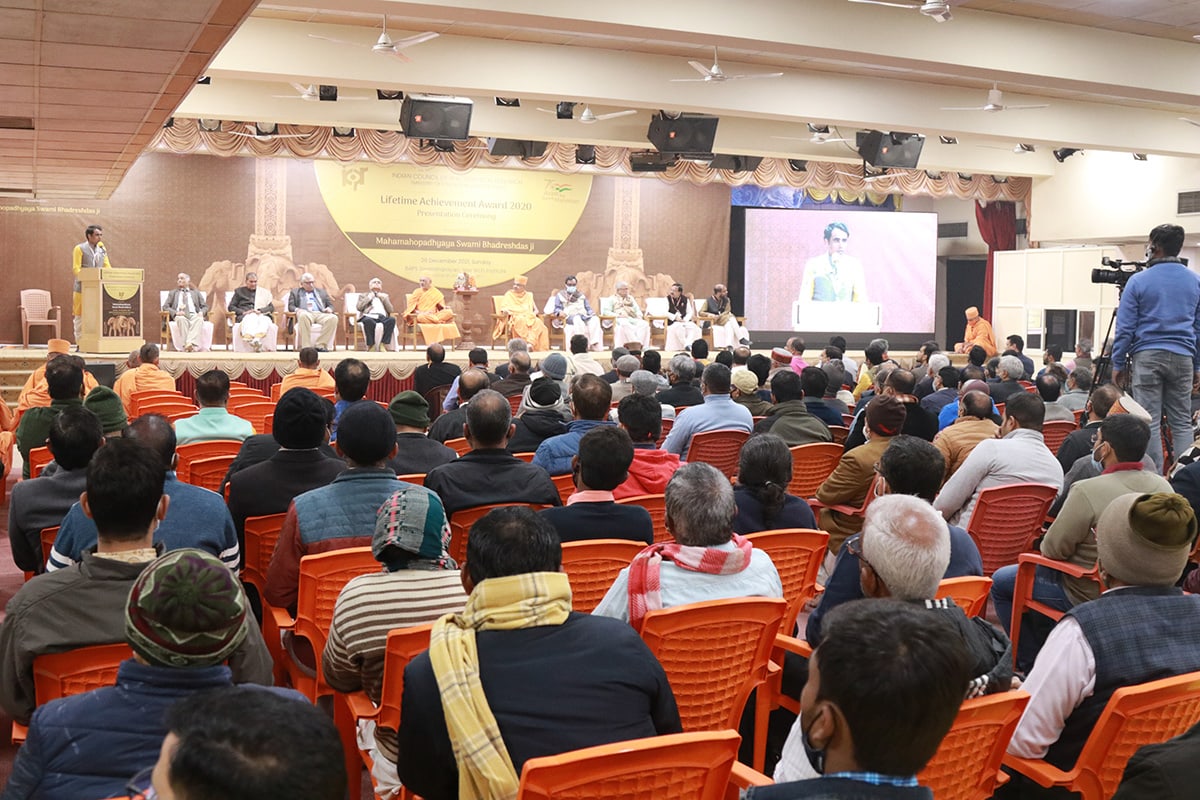 The audience intently listens to the Master of Ceremony 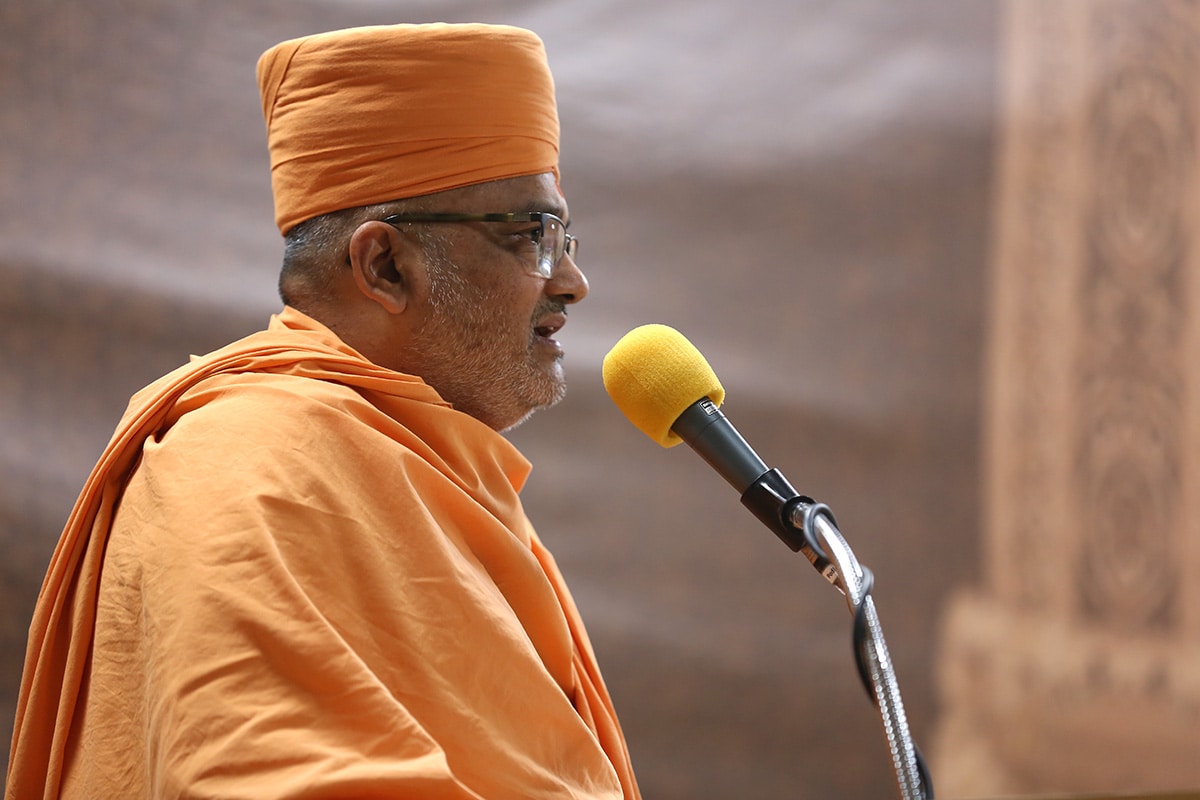 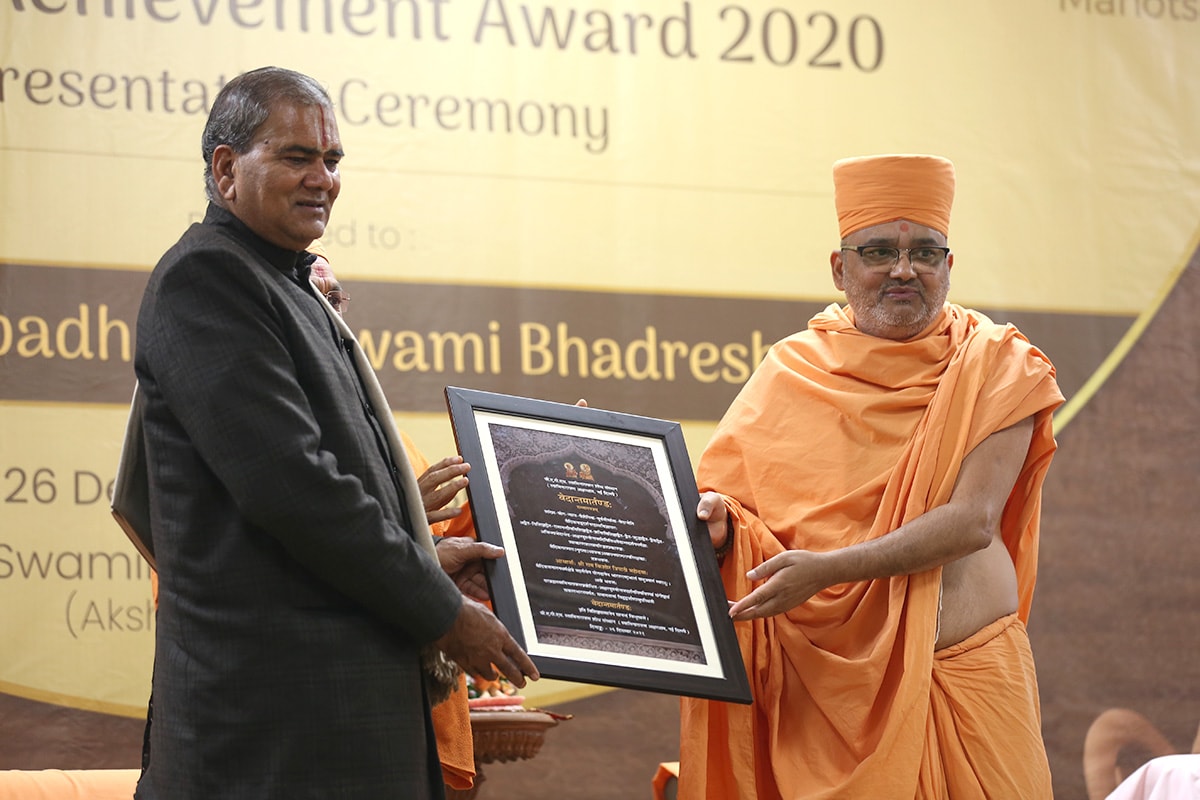 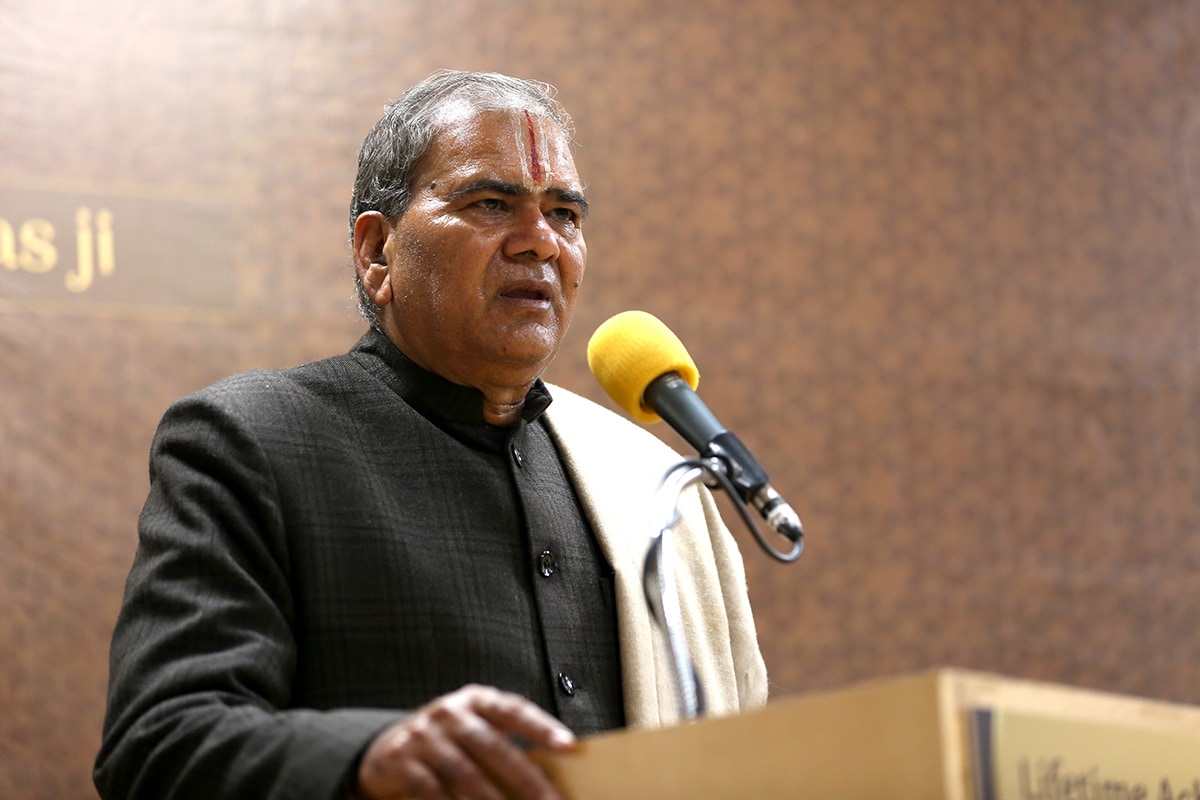 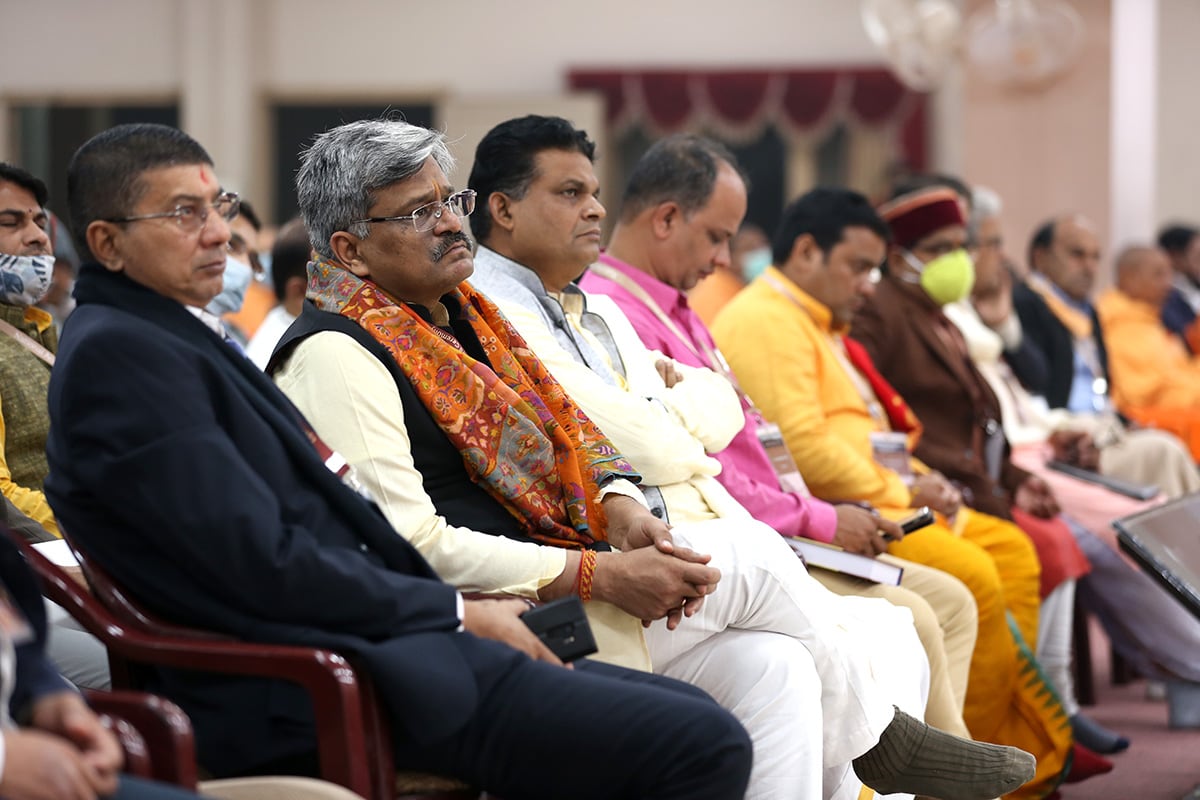 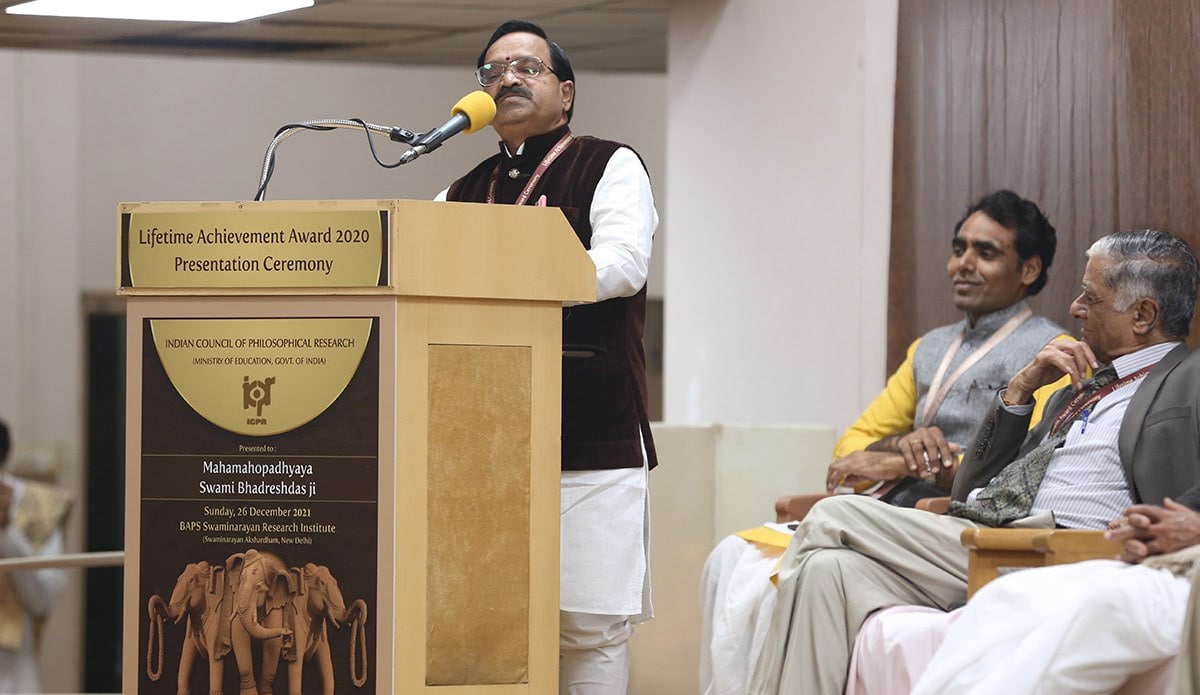 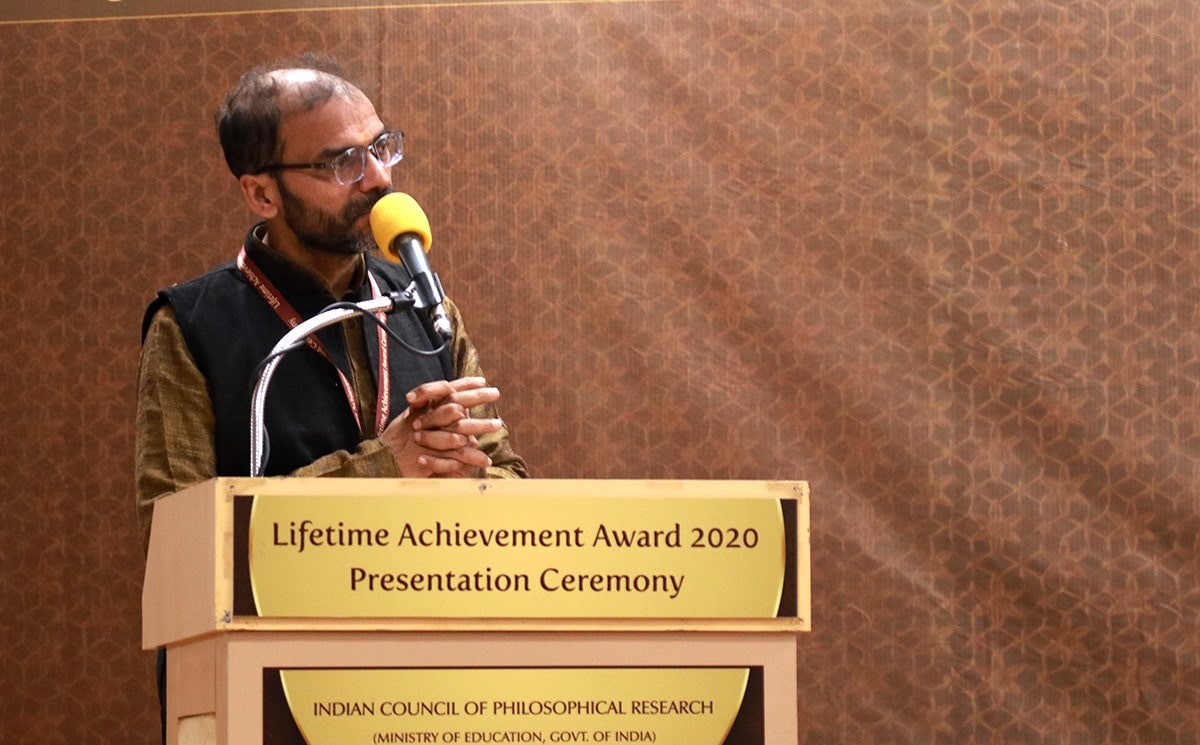 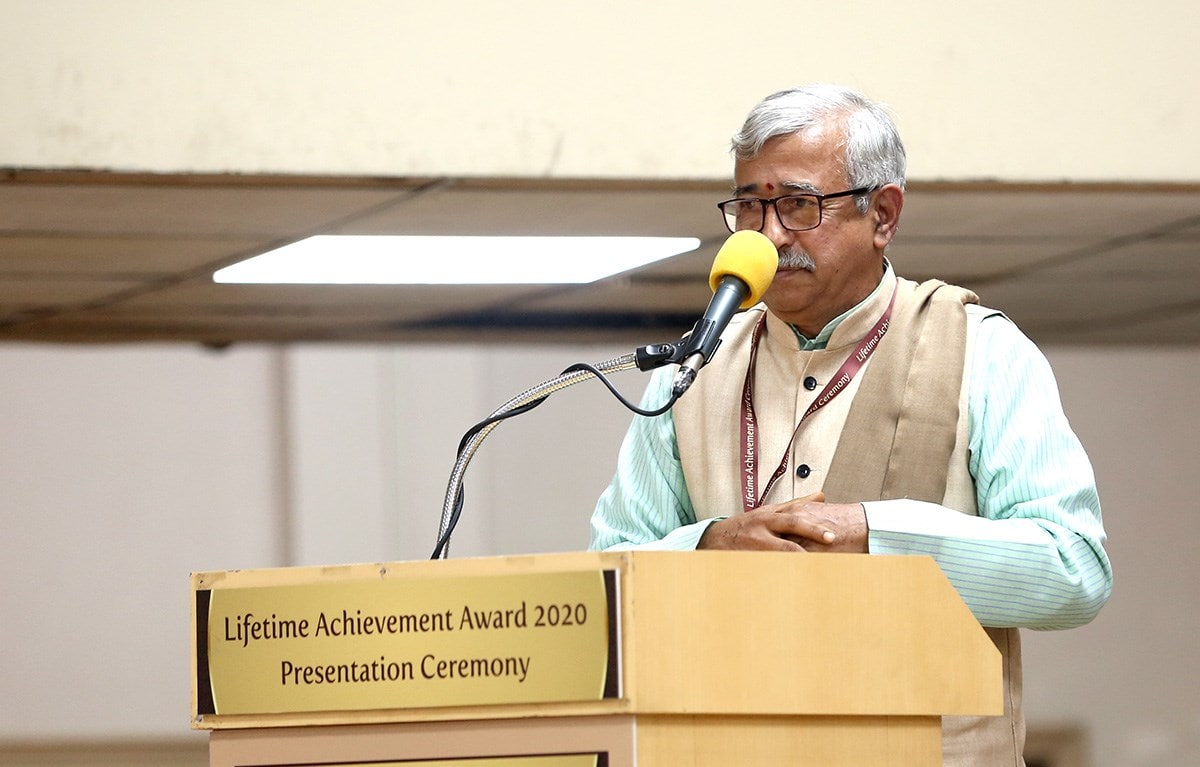 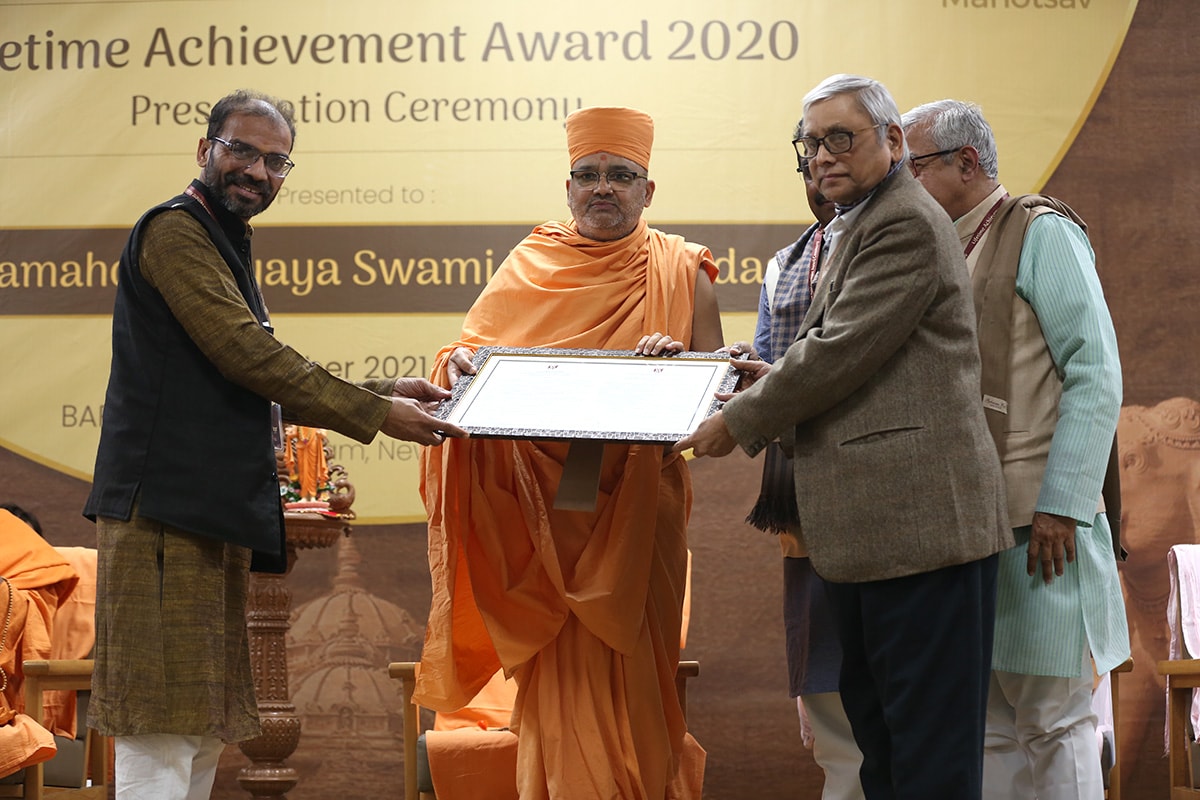 R.C. Sinha, chairman of ICPR, along with other dignitaries felicitate Bhadresh Swami with the Lifetime Achievement Award